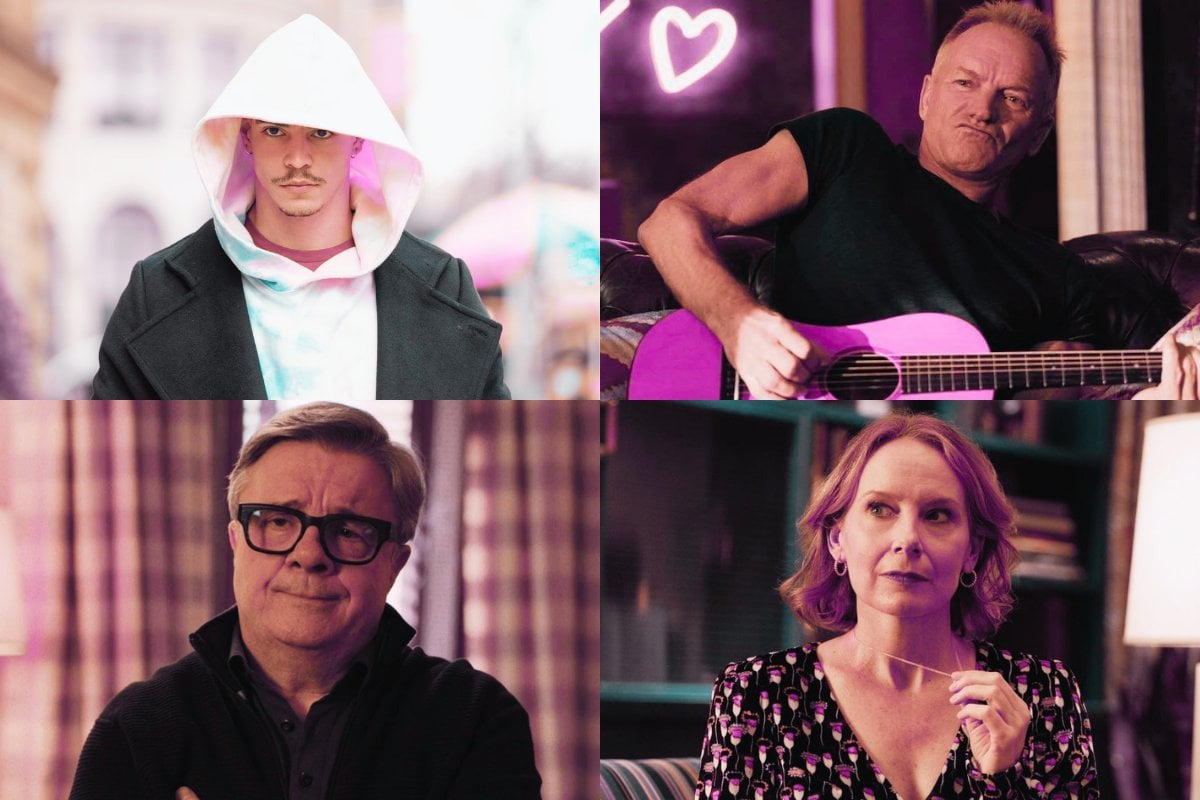 This post contains spoilers for the first nine episodes of Only Murders In The Building...

Only Murders In The Building is the most unexpected TV hit of 2021 so far.

The comedy/mystery/drama follows the story of three neighbours who start a true crime podcast.

When another tenant, a young investment banker named Tim Kono, dies in a suspected suicide, they join forces to start a true crime podcast.

The series is both a bloody brilliant mystery and a satire of our obsession with true crime and podcasts.

The final episode in the 10-part series airs on Tuesday, October 19.

Watch the trailer for Only Murders In The Building. Post continues below.

But we're all desperate to know... who killed Tim Kono?

Here are all my wild theories: 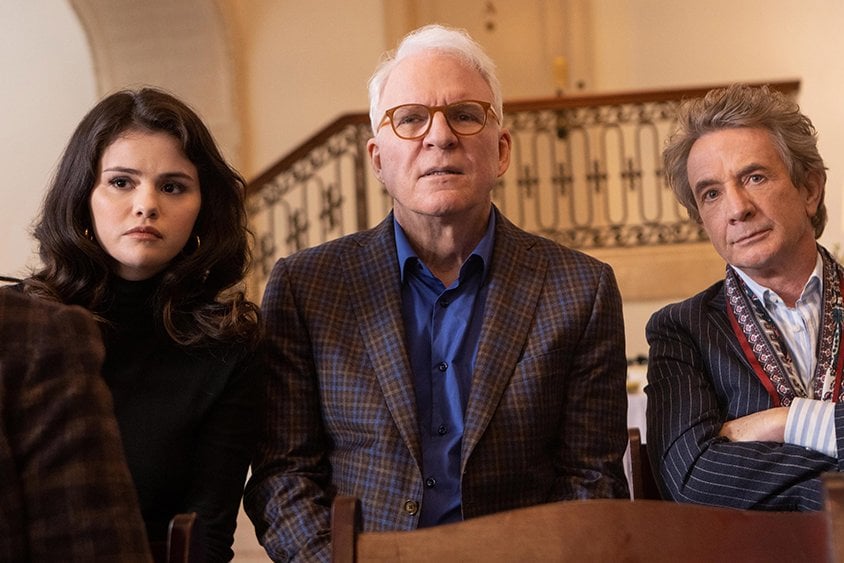 Our three main characters are all true crime obsessed, and the podcast has given them opportunities, money and exposure.

However, it seems pretty unrealistic that one of them would murder Tim Kono, in the hope of banding together with two neighbours - who they don't really know - to start a podcast.

But maybe one of them just went along with the podcast to throw the others off the scent?

In that case, the most likely suspect is Mabel who had a history with Tim and was the last to arrive at the restaurant on the night of the fire alarm and Tim's murder. 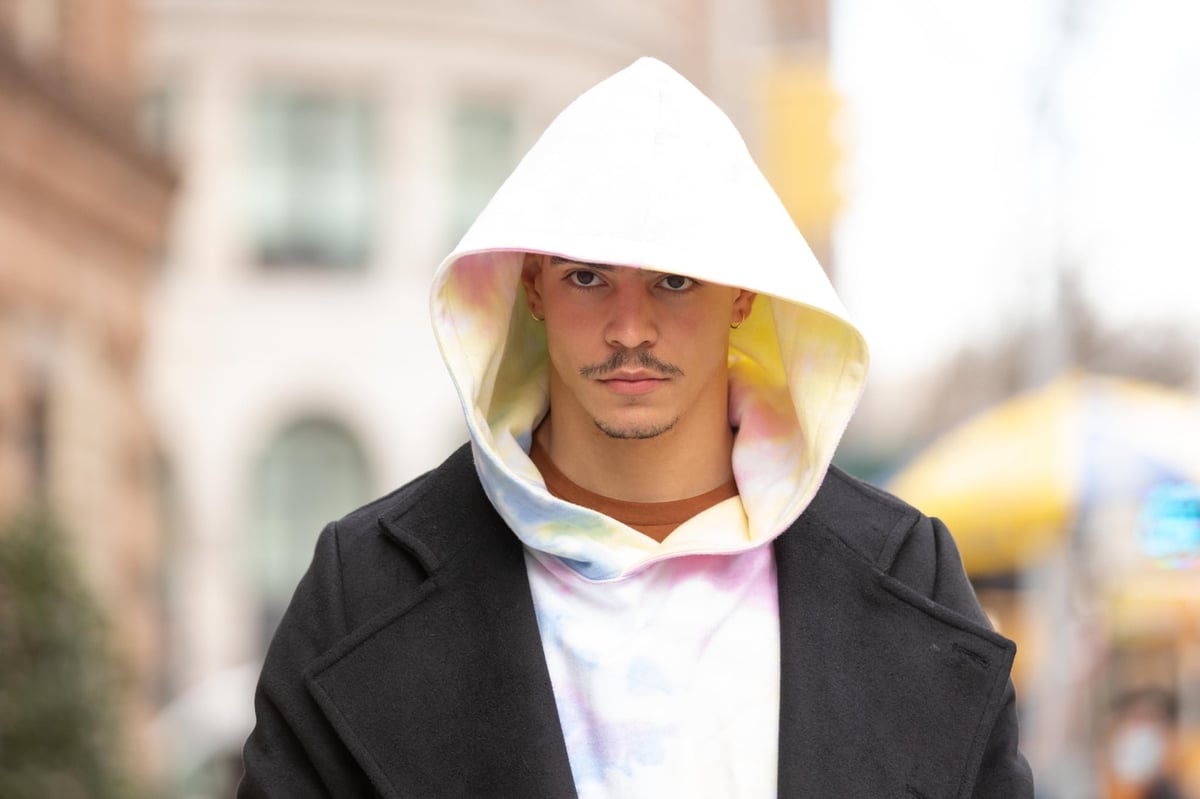 Tie-dyed Guy was seen walking up the stairs when everyone else was walking down the stairs on the night of Tim's murder.

We later found out that Tie-dyed Guy was Oscar Torres, Tim and Mabel's childhood friend who was wrongly convicted of his girlfriend Zoe's murder, and who just got out of prison.

Oscar later explained that he was going to see Tim that night but ran away when he heard a gunshot.

Oscar had a motive to kill Tim, because it was Tim's false testimony that put him behind bars in the first place.

However, Oscar killing Tim just seems too easy. You know what I mean? 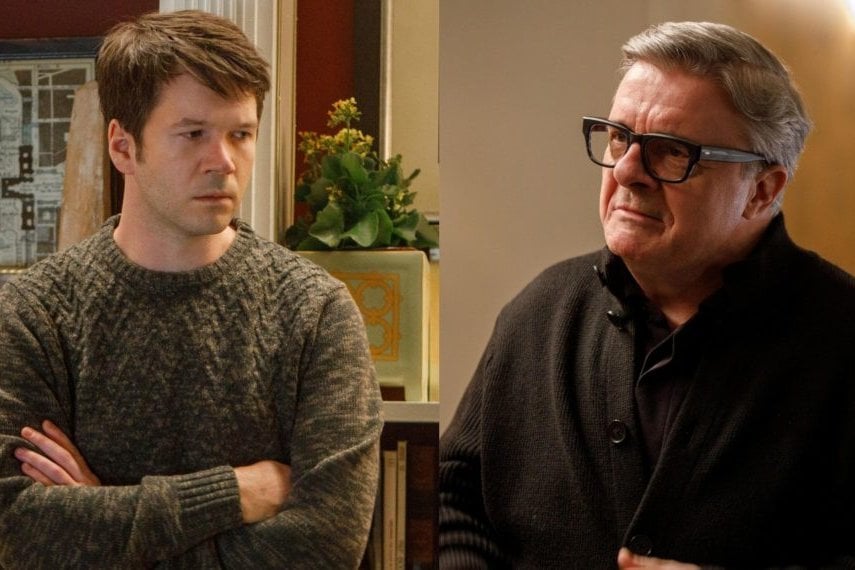 In episodes eight and nine, we learnt that Teddy Dimas, the podcast's sponsor, and his deaf son, Theo, were up to all kinds of dodgy things.

For years, they had been stealing jewellery from the dead and selling it on the black market.

Years earlier, when Mabel and the 'Hardy Boys' broke into the Dimas' apartment, Zoe stole a ring as Theo secretly watched her from their secret... vault?

Zoe realised he was watching her and told him she thought he was "hot".

Teddy later saw the ring and told Theo to get it back.

On the night of Zoe's death, Theo saw Zoe and Oscar fighting on the roof of the building. When Oscar stormed off, Theo asked Zoe for the ring back and said he would buy her a 'real ring one day'.

She laughed in his face.

They struggled over the ring and she fell off the roof and died.

Tim Kono saw the whole thing but Teddy convinced him to lie about it, and Oscar was convicted of Zoe's murder.

So, Teddy and Theo definitely have a motive for killing Tim as he has been hiding their secrets for 10 years and seemed to be gathering evidence against them.

However, they admitted to all of this when questioned by the Only Murders team and didn't kill them, which allowed them to put out an episode airing all their bad laundry.

Teddy and Theo were also later spotted on CCTV footage outside the Arconia when Tim Kono's murder took place. 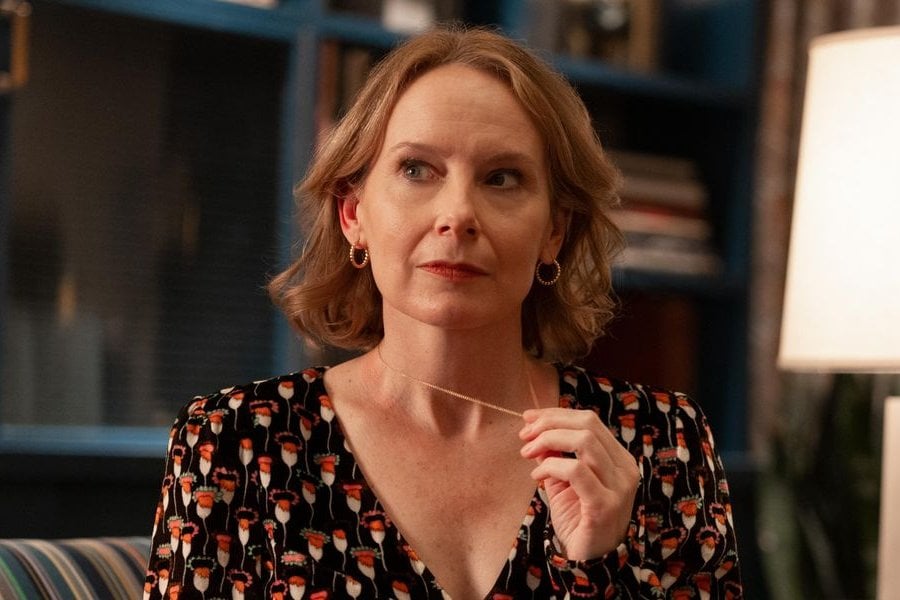 Jan, a bassoonist, quickly became Charles' love interest after they flirted a few times in the building's lift.

While Mabel and Oliver are being kidnapped by Theo Dimas, Charles is back at the Arconia hooking up with Jan.

In the next episode, Jan inserts herself into the investigation and tries to steer them away from the Dimas' and towards the crazy cat guy, Howard Morris.

Oliver yells at her, and she leaves.

Charles says he's leaving the podcast for Jan and goes to watch her concert. While he's there, Mabel and Oliver find a brush for cleaning bassoons in Tim Kono's belongings.

Mabel says: "There's only one bassoonist in the building" and Jan quickly becomes the prime suspect.

Meanwhile, at the concert, Charles discovers Jan is not the first bassoonist like she told him. And he wonders what else she has been lying to him about.

It's pretty convenient that Jan started flirting with Charles as soon as they started the podcast. And that she tried to change the direction of the investigation.

But what is her motive?

Is she in a relationship with Teddy Dimas? Maybe she's Theo's mother?

Or maybe her and Sting are in it together?

Which brings me to... 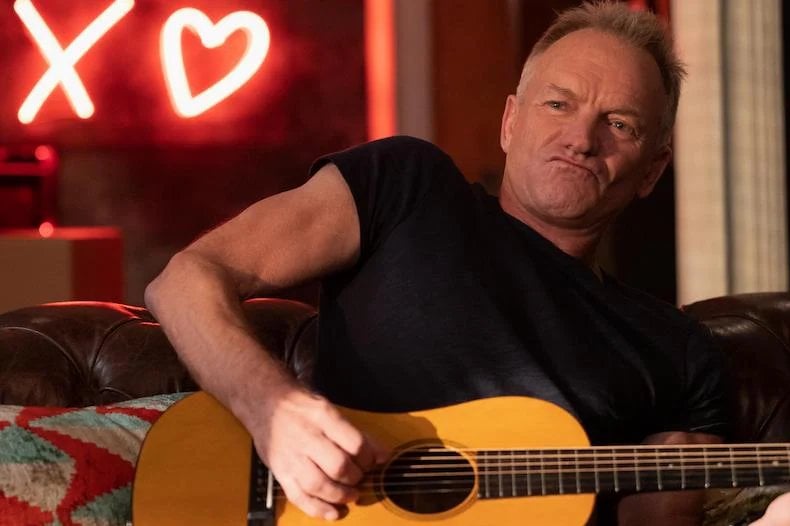 Ok, hear me out. Sting was a suspect in the second episode because he hates cats and Howard Morris' cat was killed with the same poison that killed Tim Kono.

Sting was very quickly ruled out as a suspect because how silly would it be if Sting was running around Manhattan killing his neighbours?

But what if the rest of the series has been a ploy to throw us off the... Sting scent?

Maybe in the course of his investigations, Tim Kono found some dirt on other neighbours including Sting.

We also need to address the fact that both Sting and Jan are musicians. Are they having a secret relationship? Are they selling underground bassoons?

Plus, when Jan returned to her apartment before she was stabbed, there was a note on the door which read: 'I'm Watching You'

And you know which baby boomer rocker has a song that goes: 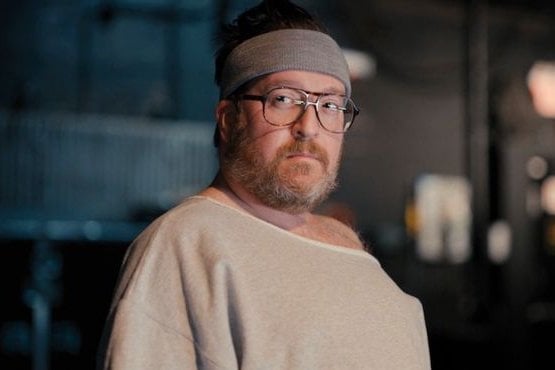 Howard's cat was poisoned with the same poison that killed Tim Kono, which initially led the team to Sting.

But what if Howard killed Tim, and then killed his own cat to throw everyone off the scent?

It would be an odd thing to do, but he's an odd man. 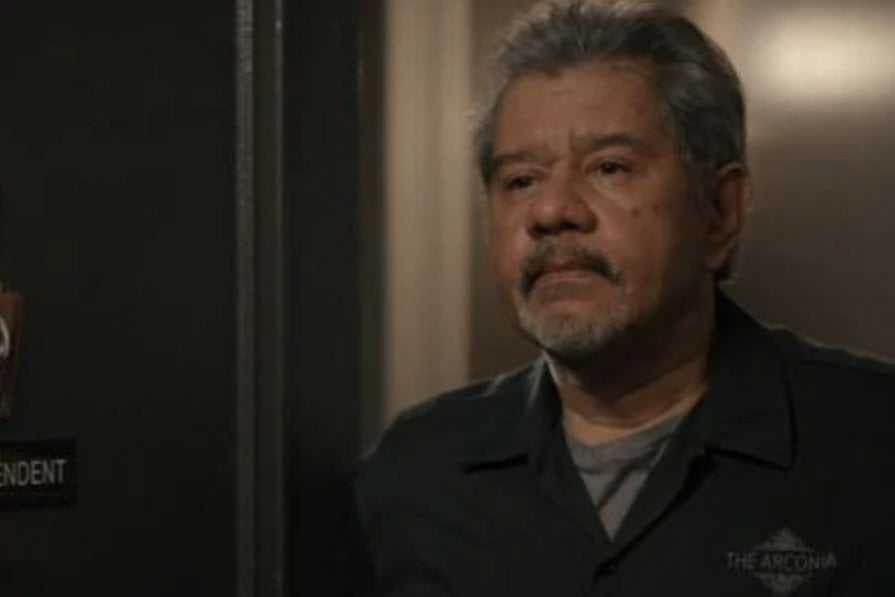 Jose Torres is the super for the building and also Oscar's dad.

He would have access to all the apartments and he also has a motive to kill Tim Kono as it was Tim's testimony that put his son behind bars for 10 years.

But if Jose wanted to kill Tim Kono wouldn't he have done it at some point in the previous 10 years, not right when his son is getting out of prison? 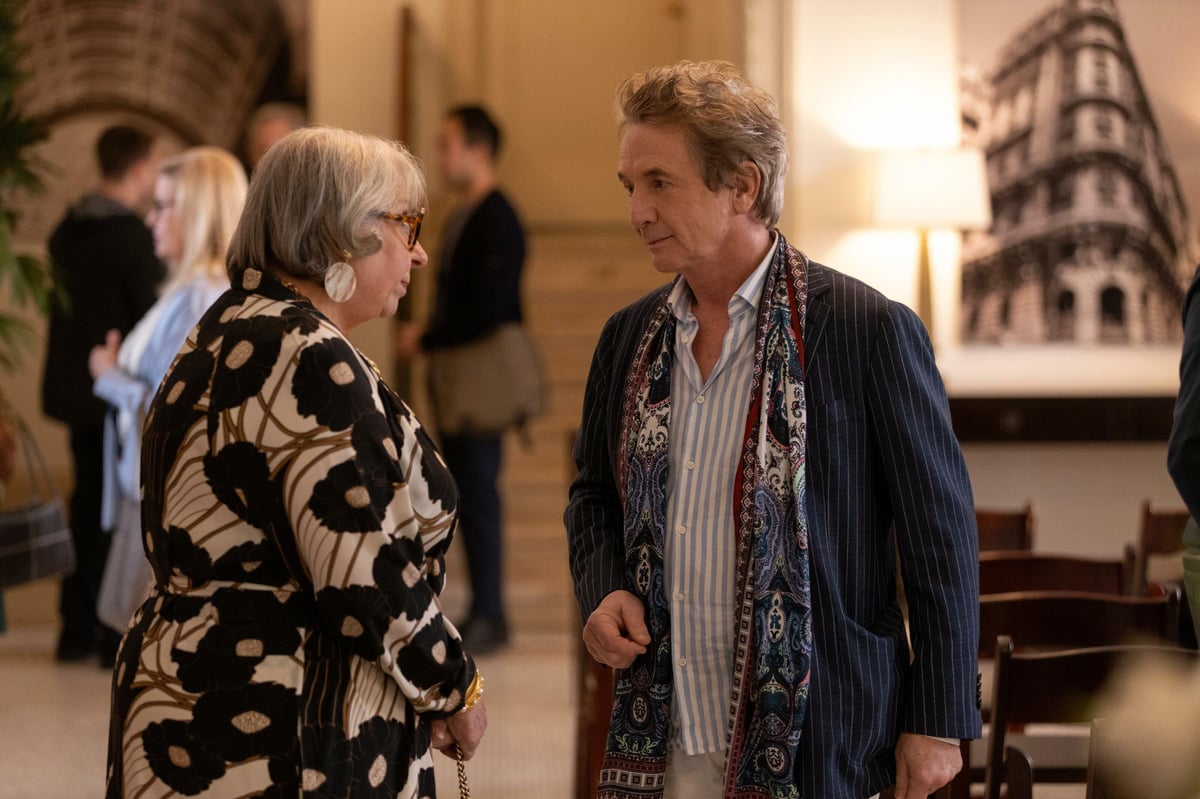 Bunny seems determined to put an end to the podcast and the bad publicity that it's creating.

But maybe her motive is actually concealing her own involvement in the murder?

Tim Kono was pretty unpopular with the rest of the residents, maybe Bunny thought the easiest way to deal with the problem was to... murder him?

The final episode of Only Murders In The Building will be streaming on Star on Disney Plus from Tuesday, October 19.

Reply
Upvote
1 upvotes
I have so enjoyed this show, I can't wait for next week's episode! As someone who grew up watching Steve Martin and Martin Short, it's so great to see them back on TV together. I really hope there's going to be a season two. I'm even liking having the weekly episodes, rather than bingeing a whole series in day or two. No theories on the killer, given the recent evidence Jan looks most likely, but I guess we'll soon find out!
Resources
Very Peri
Skin
News
General
Opinion
True Crime
Politics
Sport
Explainer
Entertainment
Celebrity
Reality TV
Movies
TV
Books
Rogue
Royal
Lifestyle
Beauty
Fashion
Weddings
Home
Wellness
Health
Fitness
Travel
Food
Family
Before The Bump
Pregnancy
Baby
Kids
Teens
School
Parent Opinion
Work & Money
Money
Finance
Career
Lady Startup