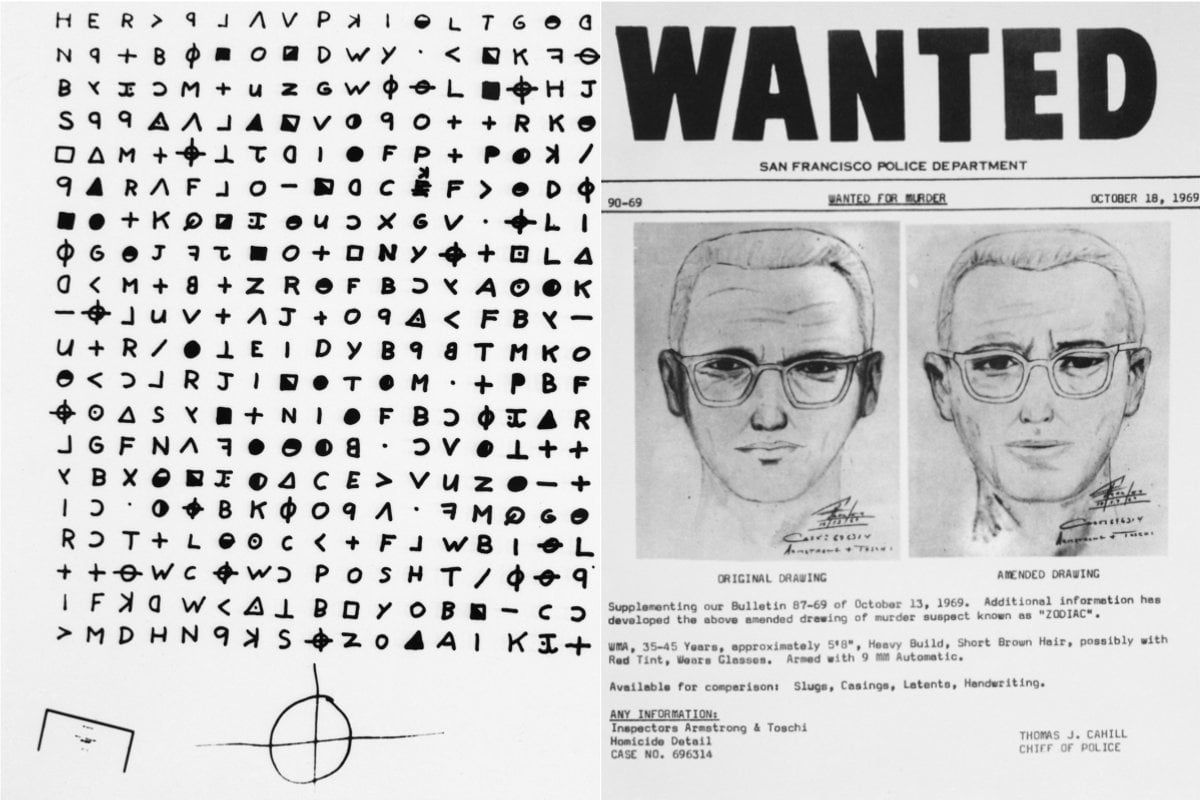 Over 50 years after the murders of the unidentified Zodiac Killer, a team of codebreakers have cracked a mysterious cipher sent to a newspaper by the serial killer. An Australian man, mathematician Sam Blake, was part of the volunteer team who solved the note.

The Zodiac Killer - who was never caught - shot or stabbed seven people in the San Francisco Bay Area over the course of a year between 1968 and 1969, killing all but two of them.

During his murderous spree, he sent a series of terrifying letters to the San Francisco Chronicle newspaper, claiming responsibility for the mysterious murders.

Some of the notes were in code, including a particularly complex missive with 340 characters that became known as the 340 cipher. 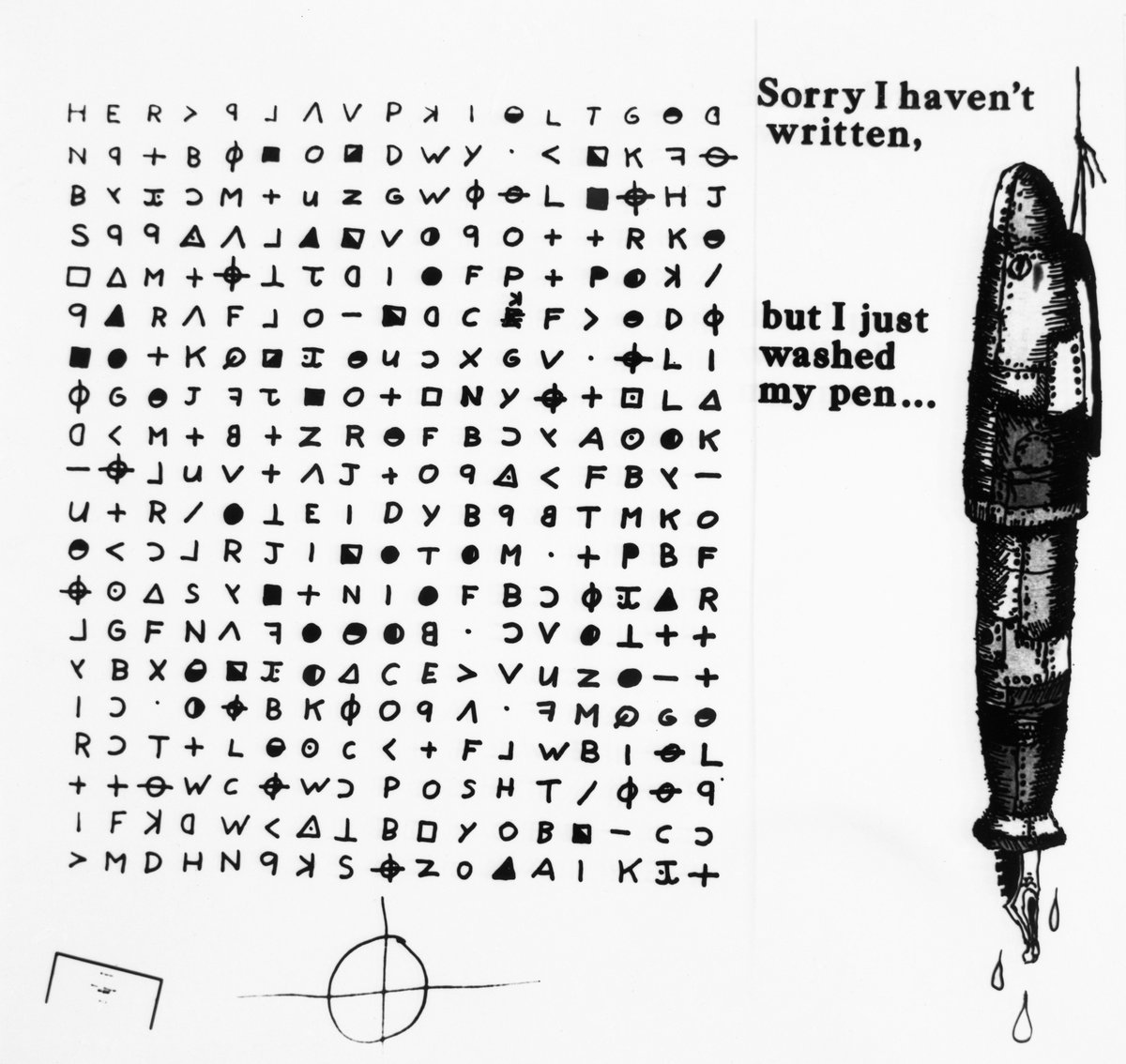 The letter known as the 340 cipher. Image: Getty.

Now, we know what it says.

"I hope you are having lots of fun trying to catch me," the cipher says.

"I am not afraid of the gas chamber because it will send me to paradice (sic) all the sooner because I now have enough slaves to work for me."

The FBI responded by saying the investigation into the half-century-old case was ongoing.

"The FBI is aware that a cipher attributed to the Zodiac Killer was recently solved by private citizens," the FBI posted to Twitter.

"The Zodiac Killer terrorised multiple communities across Northern California, and even though decades have gone by, we continue to seek justice for the victims of these brutal crimes."

Here's what happened to the victims of the Zodiac Killer, who has never been caught.

The murders of the Zodiac Killer.

Betty Lou Jensen pinned a Christmas brooch to the white collar of her purple dress, as she waited nervously for David Faraday to pick her up.

The San Francisco area teenagers, who went to different Vallejo high schools, had only known each other for about two weeks.

He introduced himself to Betty’s parents, and then the pair stopped at a friend’s house, before continuing on to a Christmas concert at Betty’s school, Hogan High.

At 10:00pm, when the concert ended, David drove the Rambler to a secluded spot on Lake Herman Road. The area was a well-known “lovers lane”.

Within an hour, Betty and David were dead.

According to the San Francisco Weekly, at 11:10pm a woman named Stella Medeiros left her ranch on Lake Herman Road to pick up her son at the local movie theatre. About five minutes into her journey, her headlights flashed on two bodies lying on the ground near the Rambler.

She put her foot on the accelerator and flagged down the first police car she came across.

When police arrived to the scene they found David lying outside the passenger door of the car. He had several gun shot wounds and was barely breathing. He died on the way to the hospital.

Betty was found about 28 feet away. She had been shot five times in the back as she was trying to flee from the killer. She was pronounced dead at the scene.

Although police chased up several leads, they didn’t have a solid suspect.

Then, six and a half months later, it happened again.

Just before midnight on July 4, 1969, Darlene Ferrin and Michael Mageau parked in a secluded spot in Blue Rock Springs Park in Vallejo.

They were just a few kilometres from where Betty and David had been killed.

While the couple sat in Darlene’s car, a second car pulled up beside them. It immediately drove away, but then returned 10 minutes later and parked behind them.

A man got out of the car, walked up to the driver’s window and pointed a flashlight in Darlene and Michael’s faces, before shooting at them five times.

The killer then walked away from the car, but returned when he heard Michael moaning. He shot them both two more times and then quickly drove away.

Darlene was pronounced dead at the scene but, miraculously, Michael survived.

About an hour after the attack a man called the Vallejo Police Department to claim responsibility. He said he also killed Betty and David.

Almost a month later, on August 1, the Vallejo Times Herald, the San Francisco Chronicle, and The San Francisco Examiner, received almost identical letters from someone claiming to be the Zodiac.

“Dear Editor, This is the murderer of the 2 teenagers last Christmass (sic) at Lake Herman + the girl on the 4th of July near the golf course in Vallejo,” the letter to the San Francisco Chronicle read.

"To prove I killed them I shall state some facts which only I + the police know."

The letters kept coming with the unknown writer claiming he loved killing because "man was the most dangerous game". The Zodiac threatened to massacre a dozen people unless The Chronicle published one of his letters.

He also threatened to wipe out an entire school bus, shooting out the front tire so he could "pick off the kiddies as they come bouncing out".

All up, the Zodiac has seven confirmed victims including Betty and David, and Darlene and Michael. However, he claimed to have killed 37 people during his reign of terror.

On September 27, 1969, college students Bryan Hartnell and Cecilia Shepard were picnicking at Lake Berryessa when a white man approached them. He was wearing a black hood, reminiscent of an executioner's hood, with sunglasses over his eyes, and a bib-like device on his chest with a cross symbol on it.

He claimed to be an escape convict and forced Cecilia to tie up Bryan with some precut lengths of plastic clothesline, then he tied her up.

He then stabbed them both repeatedly. Just moments after the attack, a man phoned the Napa Count Sheriff's office to claim responsibility.

On October 11, just two weeks later, Paul Stine was driving his cab in downtown San Francisco. At the intersection of Mason and Geary Streets, a man entered the cab.

Paul drove for a few blocks before the man shot him once in the head. The killer then wiped down the cab, took Paul's wallet, keys, and a piece of his bloodstained shirt and fled the scene.

Now, 50 years since the Zodiac claimed his first victims, we still don't know who he is.

Private investigators and amateur sleuths have named thousands of potential suspects over the years - including Senator Ted Cruz, and Ted Kaczynki - the man more commonly known as the Unabomber.

However, police have always focused on one man - Arthur Leigh Allen.

Allen was a convicted child molester who lived in the Vallejo area. He had identical boots to those worn by the Zodiac and once said in an interview that his favourite short story was The Most Dangerous Game.

Years after the attacks, Allen was picked out of a lineup by the Zodiac's surviving victims, according to the San Francisco Chronicle. He also wore a watch with the Zodiac's crosshair symbol on it.

Unfortunately, Allen died of a heart attack in 1992 when he was 58 years old. Police have never been able to gather enough evidence to make a case against him. And despite his DNA and finger prints not matching those found at the murder scenes, they won't rule him out as a suspect.

The Zodiac Killer remains one of the most chilling, unsolved mysteries of the past century. In 2018, a true crime podcast, Monster, is investigated the case.

The podcast, which is hosted by Payne Lindsay and produced by How Stuff Works, deep dived into the mystery and talk to the people who were there.

Now, it seems they could be closer than ever to understanding who the Zodiac Killer is.

No one investigated Sen. Ted Cruz! He wasnt even born yet when the crimes occurred!!!