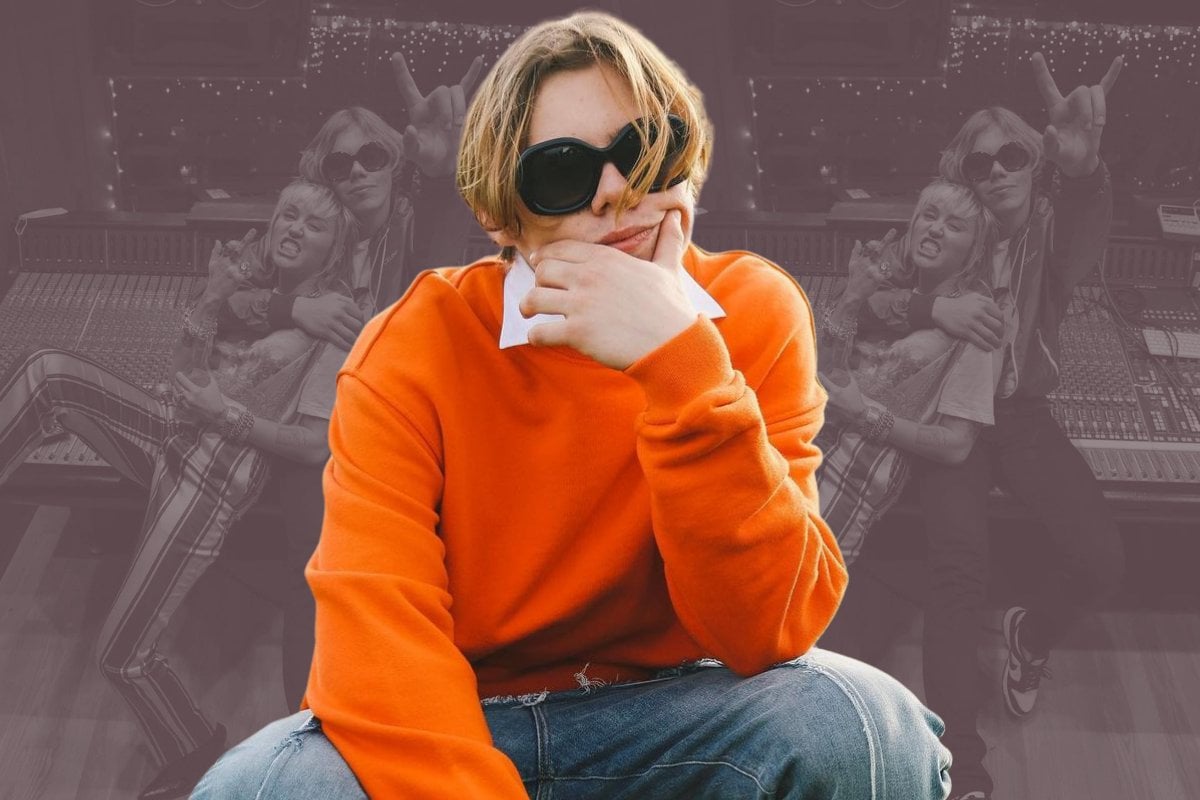 In the past few months, The Kid Laroi has become one of the fastest-growing musicians in the world.

Now, the Sydney-born musician has made his Saturday Night Live debut.

Watch a clip from Miley Cyrus and The Kid Laroi's performance on Saturday Night Live below. Post continues after video.

Over the weekend, The Kid Laroi joined Miley Cyrus on the late-night sketch comedy show for a performance of their remix of Laroi's song, 'Without You'.

With the hugely popular yet controversial Elon Musk hosting the episode, Saturday Night Live garnered even more viewers than usual, providing a life-changing platform for the Aussie musician.

I JUST DID FUCKING SNL WOW WHAT THE ACTUAL FUCK THANK YOU @MileyCyrus LOVE YOU AND THANK YOU @elonmusk FOR SAYING MY NAME CORRECTLY IT WAS AN INSANE EPISODE!! BUT MOST IMPORTANTLY THANK YOU TO THE FAM YALL ARE THE GREATEST OF ALL TIME AND NEVER LET ANYONE TELL YOU DIFFERENT!!!!!!

It was a big move for the teenager who just years ago was couch surfing in Sydney with his mother.

The Indigenous musician's stage name is derived from the name of the Aboriginal community which his ancestors came from, the Kamilaroi tribe.

Howard's great-great-grandfather, who was a part of the Stolen Generation, was told growing up that he was Spanish. But at 18, he learned he was Aboriginal.

Throughout his childhood, Howard gained a passion for music thanks to the influence of his father Nick, a music producer and sound engineer, and his mother Sloane, an Indigenous music executive.

According to The Sydney Morning Herald, Howard was just 12 years old when he was noticed by Grammy-nominated producer Khaled Rohaim.

"I saw this kid standing in the corner at the back of one of the studios, and he was so young I was like, 'What are you doing out at this time of night?' And he’s like, 'I make music, I’m a rapper.' So I was like, 'Yeah? Play me your music.' He played me four songs, and I was blown away."

Around that same time, while attending Sydney's Australian Performing Arts Grammar School on a scholarship, Howard began uploading his music on social media and SoundCloud as he slowly grew an online following.

But it wasn't an easy journey.

After his parents split, Howard and his mother often lived hand-to-mouth. Although they lived in public housing in Redfern for some time following the separation, the pair were later evicted, leading them to couch surf and drift between houses in Sydney.

"When you get kicked out of public housing, that's like, f**ked up. Because like, public housing is like, the last resort. So after that it's like, what the f**k? Where do I go from there?" the 17-year-old shared in a recent documentary by Spotify.

Speaking to The Sydney Morning Herald, Rohaim remembered picking Howard up "from a different spot... every two or three days".

"He had no money, so we used to just eat together and record together," he added.

But in 2018, Howard began making waves in the Australian music industry when he became a finalist on Triple J Unearthed High. Although Howard didn't win the competition, it led to the release of his five-track debut EP, 14 With a Dream, as well as a record deal with Grade A Productions and Columbia Records.

After being signed, Howard began being mentored by Juice WRLD, accompanying the late rapper as a support artist on his Australian tours in 2018 and 2019 and featuring on a number of songs with the 21-year-old.

After Juice WRLD died from a drug overdose in December 2019, Howard chose his song 'Go', which featured the late rapper, as the lead single on his debut album, F*ck Love.

The album, which was released on July 24, 2020, led Howard to become the youngest solo artist ever to hit number one on the Aria album charts in February 2021.

"Number one in my own country means more to me than anything in the world," the musician said in a statement issued by Sony Music Entertainment.

"Thank you to everyone who has supported me and been with me through all of this. I love you all."

Now living in Los Angeles, Howard is quickly becoming one of the fastest-rising musicians in the world.

Speaking to Forbes, Howard opened up about his new life in Los Angeles with his mother and younger brother.

"It’s a whole different world than where I’m from," he said.

"It’s kind of weird coming from Australia and being thrown into the mix in LA, but at the same time I feel like, 'This is what I was always meant to do.' So it kind of comes naturally for me. I do sit back sometimes and say, 'Damn, this s*** is crazy,' but I’ve kind of been wanting to do this my whole life, so it’s amazing to finally get the opportunity to do this because not a lot of people where I’m from get this kind of opportunity."

While based in LA, the 17-year-old has collaborated with Miley Cyrus and Justin Bieber, appeared on The Tonight Show with Jimmy Fallon and The Ellen DeGeneres Show, and seen his music go viral on TikTok.

And now, thanks to Saturday Night Live, The Kid Laroi is dominating the charts worldwide.

Just four months ago, Elton John predicted that the Aussie rapper was set to become one of the biggest musicians in the world.

"You’re already huge, but I hope you realise what’s gonna happen to you in 2021," the singer told Howard on his radio show.

"You’re gonna be one of the biggest artists in the whole wide world."

And it seems the 'Rocket Man' singer was spot on.