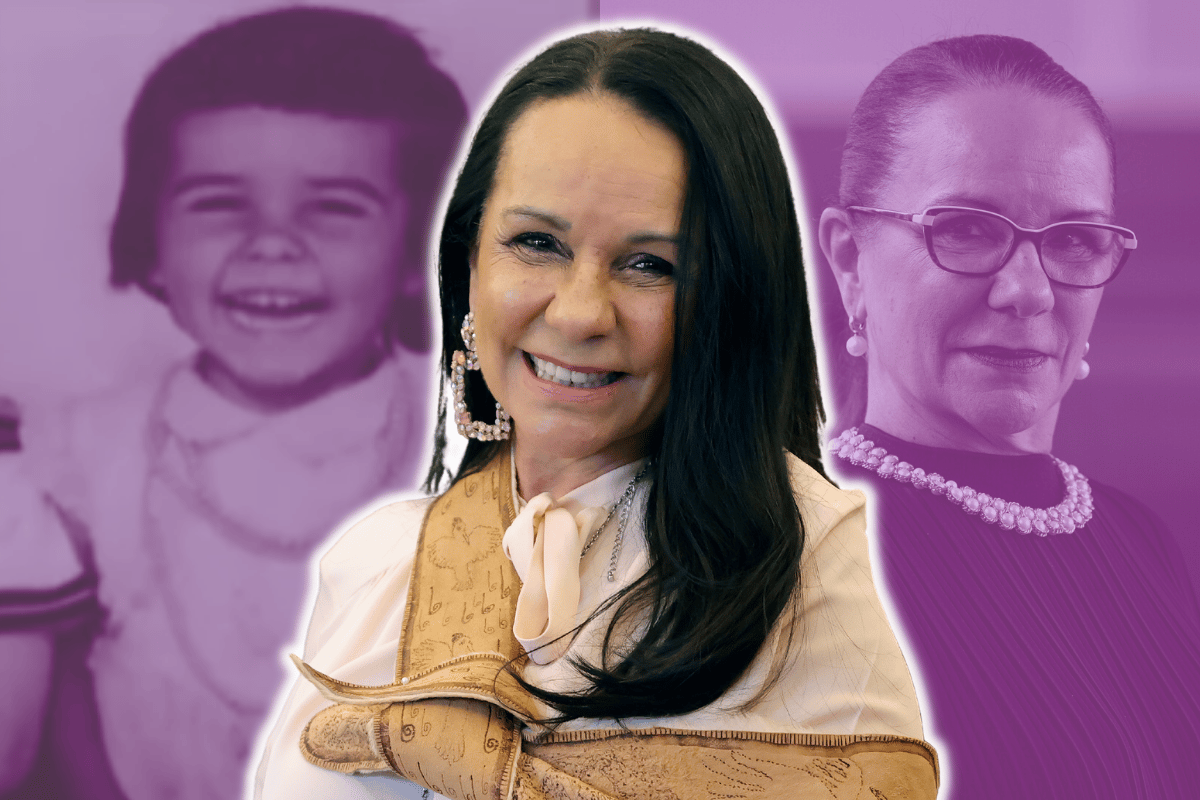 Five years ago, Linda Burney returned home to Sydney to be with her son "one last time".

The 33-year-old had been found dead in the family's home, following a struggle with mental health and addiction.

The mother-of-two, who had also lost her partner years earlier, found herself going through a "dire, grief-stricken time".

"I don't know what life will be like without him," she said.

A month after Binni's death, Linda was back in parliament; a place where she'd made history a year earlier as the first Indigenous woman elected to the House of Representatives.

"Our lives have not been without very difficult challenges," the mother-of-two told Women's Weekly. "It hasn't been easy, but we've hung in."

Today, Linda has been sworn in as the country's new Indigenous Australians minister; the first ever Aboriginal woman and second First Nations person to hold the title.

Here's everything we know about the 65-year-old trailblazer, including her family life and career in politics.

Linda grew up in the tiny town of Whitton, in NSW's Riverina, located on Wiradjuri country.

She was separated from her mother as a baby and raised by her non-Indigenous great-uncle, William, and his sister, Letitia, who were in their 60s when they took her in.

"I was born at a time when a white woman having an Aboriginal baby was shocking – and doubly so if that woman was not married," Linda said in her first speech in the House of Representatives in 2016.

"I was born at a time when the Australian government knew how many sheep there were but not how many Aboriginal people. I was 10 years old before the ‘67 referendum fixed that."

Growing up, Linda went to school at Whitton Primary and Leeton High before attending Penrith High School, when she moved to Western Sydney to live with her mother.

Looking back, she remembers a "horrific experience" she had in Year 7 leaning about ‘the Aborigines’.

"The way it was taught and what people actually thought of Aboriginal people, their history and way of life, made me embarrassed and so ashamed. The teaching of the subject reflected how Aboriginal people were regarded at that time – ‘related to Stone Age man, no culture, a nation that wandered aimlessly around," she shared in an article published by Independent Education.

It was this experience that made Linda realise "the education system was not what it should be" and later inspired her to become a teacher and work towards changing the curriculum.

When Linda was 28, she met her father, Laurence "Nonnie" Ingram, for the first time.

"I showed him a photograph of my mother taken at about the time he would have known her. He looked at it for about 30 seconds and then he put his arms around me and said, 'I hope I don't disappoint you'," she told Women's Weekly.

After meeting Nonnie, a folk singer, the proud Wiradjuri woman also found out she had 10 brothers and sisters.

"I've met them all and there's an enormous amount of love. Within the Aboriginal community – because we've had such a story of separation and removal – if a child comes back, that place is found. It's a cultural thing. That place is waiting for you."

Twenty years ago, Linda found herself in an abusive relationship as a young mum-of-two.

She decided to leave when she realised how the abuse was impacting her children.

"There had been a pretty violent incident," she told Women's Weekly.

"I stayed a bit after that. Then I saw the effects on my kids and I thought, 'This is it'. It was a watershed moment for me."

Linda, who recognises she was in a "different position from a lot of women" being economically independent, waited until her partner at the time had left the house.

"Then I rang a friend and said, 'Come and get me'. I packed one small bag between the three of us, got in the car and left."

Linda and her children later "started afresh" and "moved to La Perouse [in Sydney's south-east] with an enormous amount of community support".

She went on to find love with former journalist and land rights activist, Rick Farley.

The pair were together for nine years before he died in 2006 when his wheelchair overturned outside Balmain Hospital in Sydney following a brain aneurism.

"I remember, about a month after Rick died, I was standing at my kitchen sink washing up, and the kitchen window looked out to my lovely garden, and it struck me, you have a decision to make right now," she told the publication.

"You can either wallow in the depths of depression, which I had developed, feeling sorry for yourself and angry with the world, and all those emotions that come with grief, or you can take this terrible experience and use it to grow."

After teaching for two years, Linda decided to follow a political path and swap her classroom for a party room.

In 2003, she became the first Aboriginal person in NSW Parliament, where she held the seat of Canterbury for 14 years.

In 2016, she made history yet again when she was elected federal member for Barton and became the first Indigenous woman to sit in the House of Representatives. She was also appointed as shadow minister for human services.

That year, she delivered her maiden speech to parliament holding a Kangaroo cloak in her arms.

"This cloak tells my story. It charts my life," she explained. "On it is my totem, the goanna, and my personal totem, the white cockatoo – a message bird and very noisy. I intend to bring the fighting Wiradjuri to this place".

Today, she took another step forward in her political career when she was sworn in as the country's new Indigenous Australians minister. 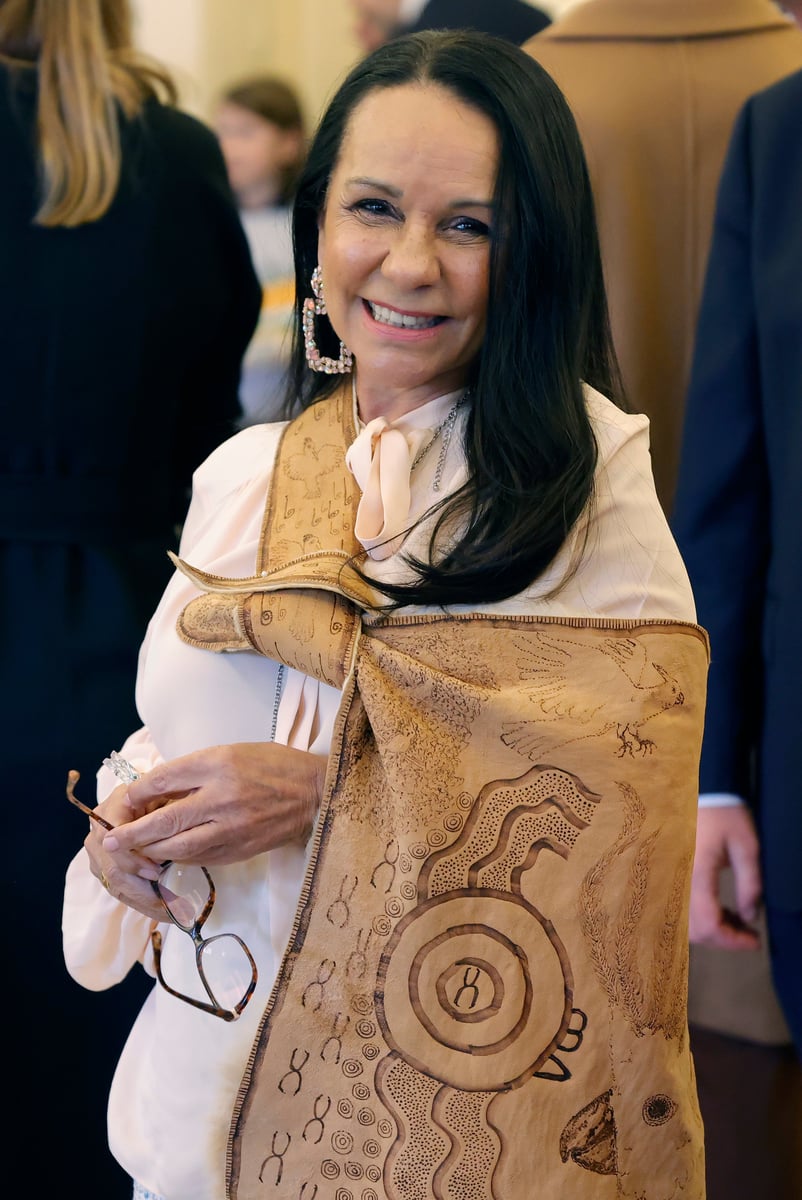 Linda Burney at the swearing-in ceremony at Government House on Wednesday.

Throughout her political career, Linda says her most significant achievement was introducing the Keep Them Safe reforms to parliament, which followed a 2008 inquiry into child protection.

Most recently, she's been a prominent voice calling for a First Nations Voice to Parliament as part of the Uluru Statement from the Heart.

During the Lowitja O'Donoghue Oration speech on Monday, Linda called on Opposition Leader Peter Dutton to "inspire our country to something really great" by supporting the Voice.

"There is no one for whom supporting a referendum for a Voice to Parliament represents a bigger political opportunity than for Peter Dutton," she said.

"It's also about being on the right side of history."