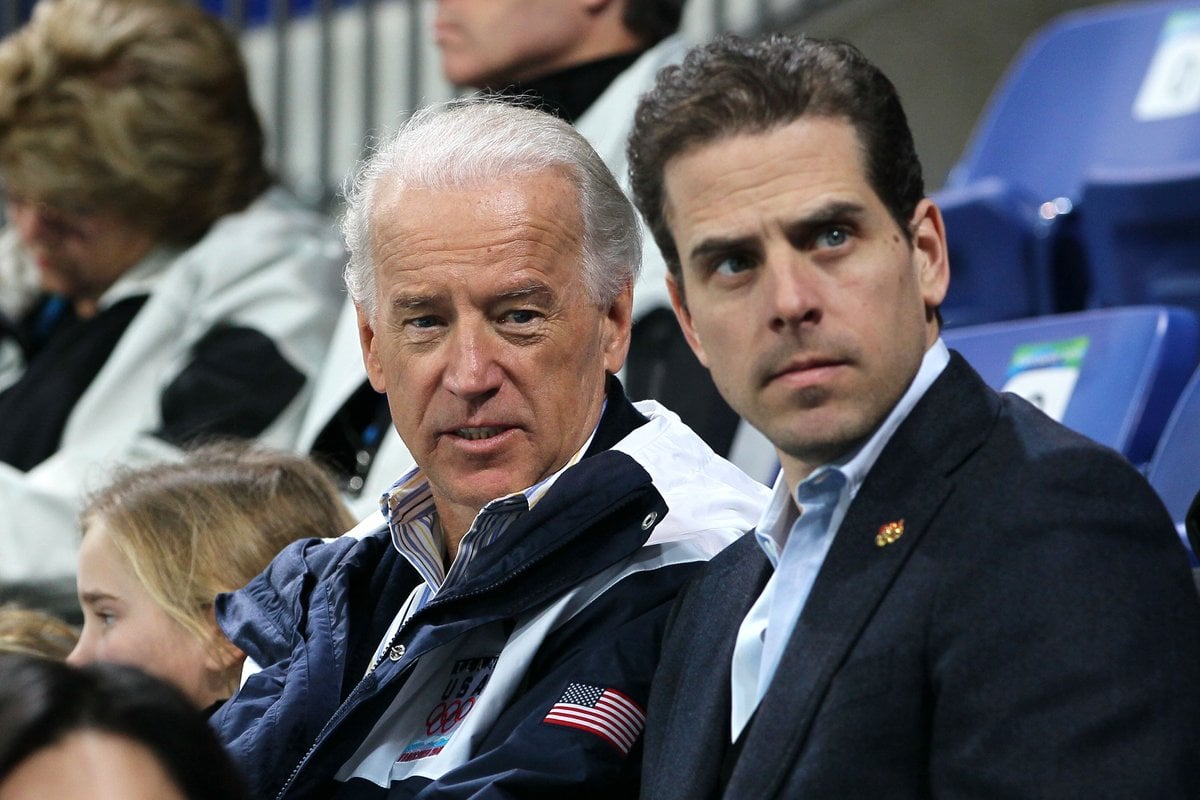 Hunter Biden has had a tumultuous life in the political spotlight.

The 51-year-old, who is the youngest son of US President Joe Biden, was subject to Donald Trump's most personal and callous attacks on Joe Biden during the 2020 presidential election, when he repeatedly attempted to use Hunter Biden's drug addiction and business dealings to discredit his father's campaign.

But now, after his father's election win, Hunter Biden has released a memoir in which he details, among other things, his career as a lawyer, his cocaine addiction and the pressures of being the son of Joe Biden. 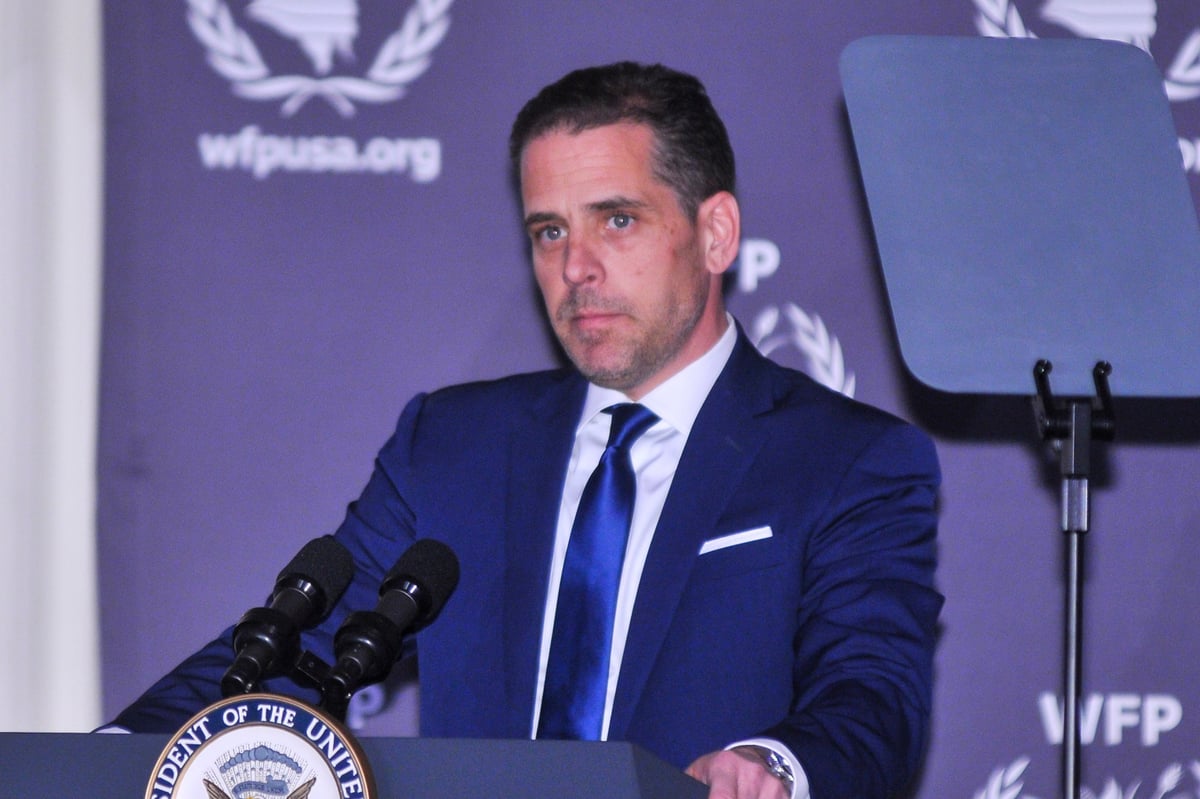 Hunter Biden was at the centre of a political storm in 2020 when former President Donald Trump led a crusade against Hunter Biden, alleging his father illegally used his role when he was vice president to enrich his son’s overseas business dealings. Whilst the Trump camp insisted the Biden family are politically corrupt, Joe and Hunter always denied any legal wrongdoing.

But beyond the scrutiny over his public career, Hunter Biden’s private life has been filled with tragedy and personal turmoil.

Robert Hunter Biden was born in 1970, one year after his older brother Joseph Beau Biden (who, like Hunter, went by his middle name). Hunter Biden was the middle child of Joe Biden’s three kids to his then-wife, Neilia Hunter - the pair also shared their youngest daughter, Naomi Biden.

In 1972, Joe Biden won the US Senate election Delaware. Just weeks later, Neilia Hunter was in her car with their three children, on their way to purchase a Christmas tree. A car collided with theirs and Neilia and Naomi were killed. The two boys survived the crash but were left with serious injuries. Beau had multiple broken bones, and Hunter was left with a fractured skull - eventually making a full recovery.

Watch: Joe Biden speaks about the death of his wife and daughter. Post continues below.

Five years after the accident, Joe Biden met Jill Jacobs, whom he would marry in 1977 and who became a step-mother to Hunter and Beau. She is now the First Lady of the United States.

“I fell in love with a man and two little boys standing in the wreckage of unthinkable loss. Mourning a wife and mother; a daughter and sister. I never imagined, at the age of 26, I would be asking myself, ‘How do you make a broken family whole?’” Jill Biden reflected at the Democratic National Convention in 2020.

Over 40 years after losing his sister and mother, tragedy hit the Biden family once more.

In 2010, Beau Biden suffered a small stroke, according to The New York Times. By 2013, doctors diagnosed him with brain cancer and removed a small lesion from his brain. He underwent radiation and chemotherapy treatment, but died on May 20, 2015, aged 46. By the time Hunter Biden was 43, he had lost his brother, sister and mother. 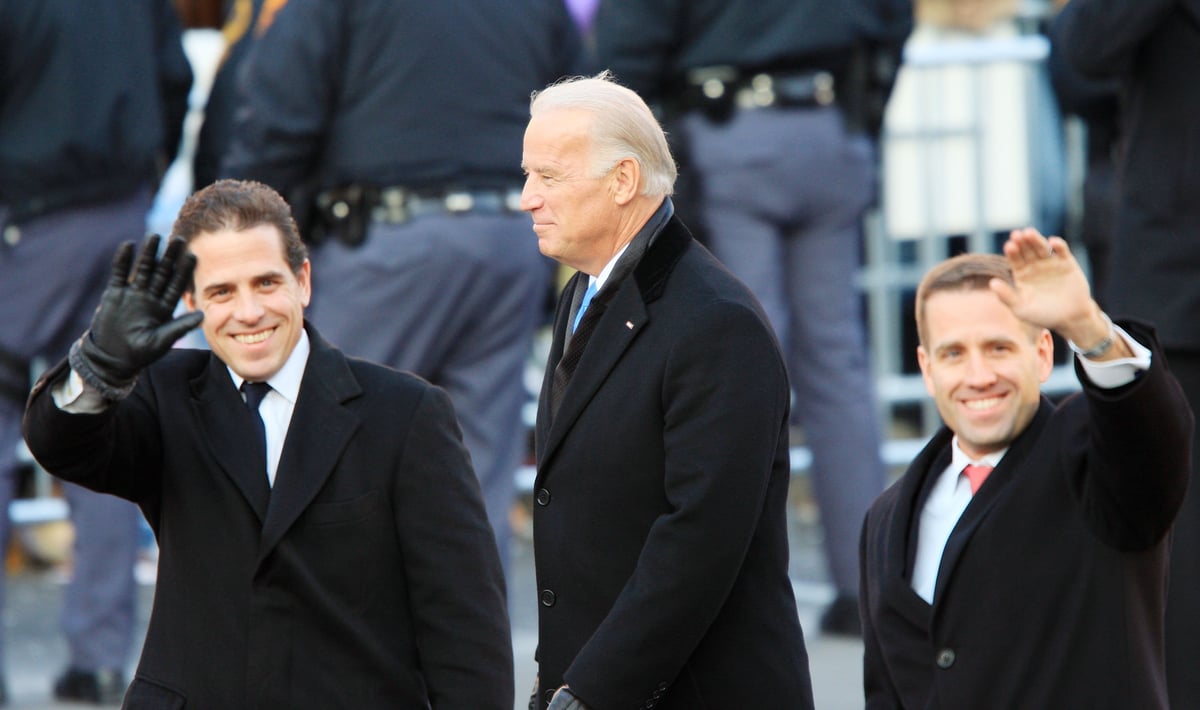 Hunter and Beau Biden with their father, Joe Biden, in 2009. Image: Getty.

Then-President Barack Obama delivered a eulogy at Beau's funeral, calling him "a good man. A man of character. A man who loved deeply, and was loved in return."

Beau and Hunter were incredibly close. Hunter told The New Yorker in 2019 that: “If we wanted to jump off a cliff into a watering hole, I would say, ‘I’m ready, let’s go,’ and Beau would say, ‘Wait, wait, wait, before we do it, make sure there aren’t any rocks down there.’”

In the same year as his brother’s death, Hunter Biden was allegedly exposed in a data leak from Ashley Madison - a dating website for people seeking extramarital affairs. Hunter, who at the time was married to his wife of 22 years Kathleen Biden, denied having an account on the website. Nevertheless, he and his wife split two months later. The pair had three daughters: Naomi, Finnegan, and Maisy. 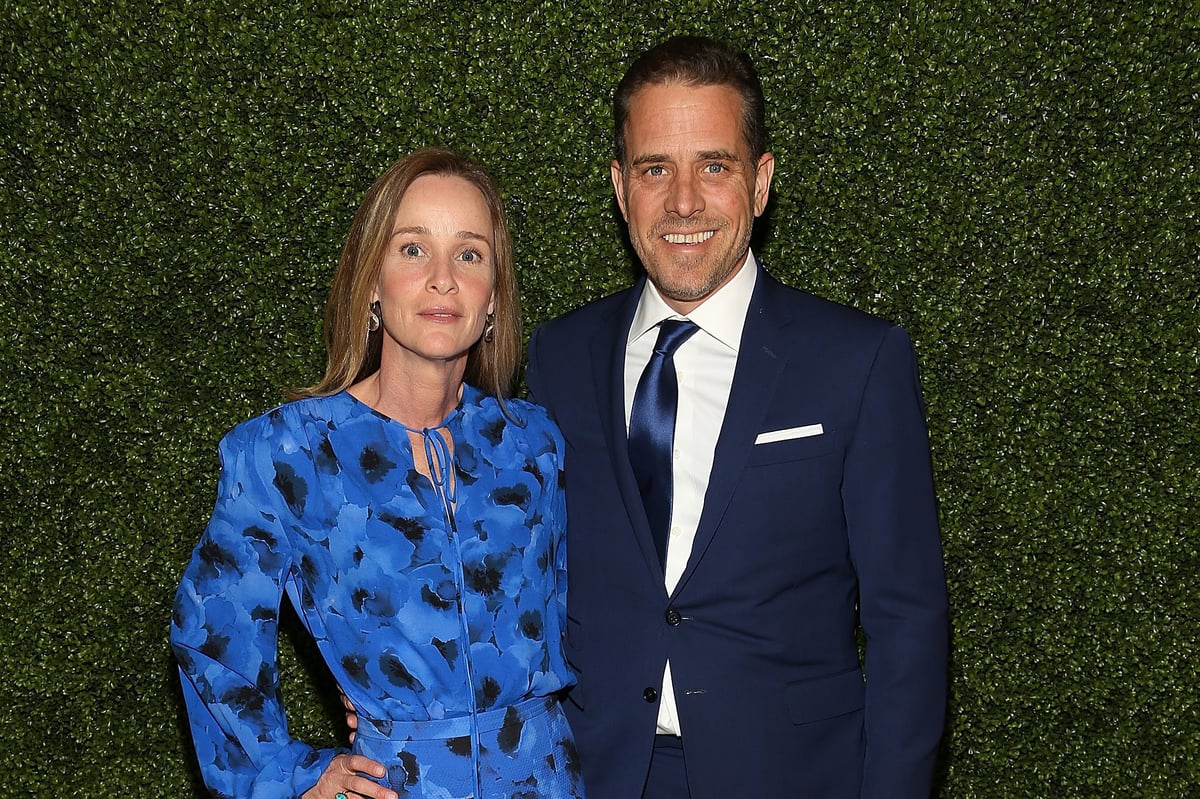 In 2017, Hunter’s ex-wife Kathleen Biden said that Biden had allegedly “created financial concerns for the family by spending extravagantly on his own interests (including drugs, alcohol, prostitutes, strip clubs, and gifts for women with whom he has sexual relations), while leaving the family with no funds to pay legitimate bills,” in court documents obtained by the media.

The same year as the finalisation of his divorce, whispers of a new relationship emerged, and were later confirmed by Hunter himself.

His new partner was Hallie Biden, the widow of his brother, Beau.

“Hallie and I are incredibly lucky to have found the love and support we have for each other in such a difficult time, and that’s been obvious to the people who love us most,” Hunter told Page Six in 2017. “We’ve been so lucky to have family and friends who have supported us every step of the way.” 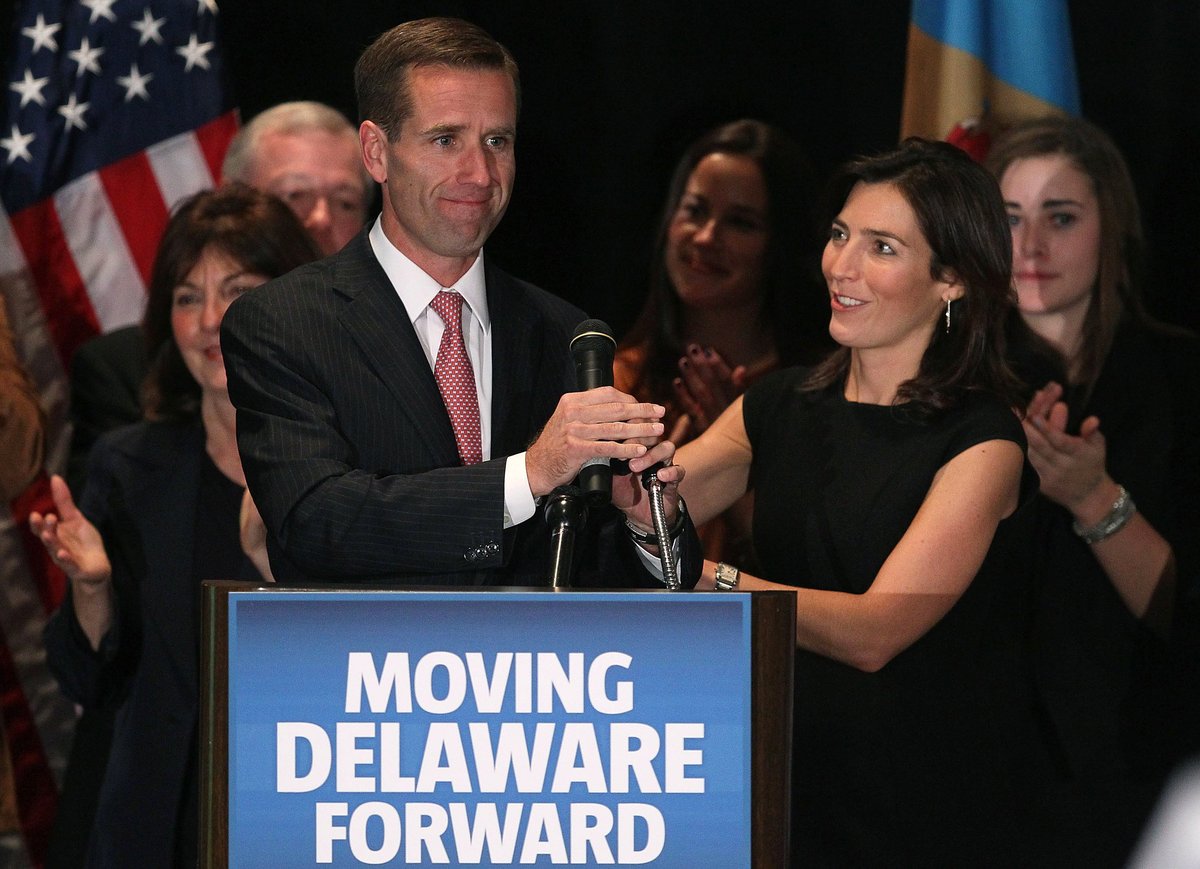 “We are all lucky that Hunter and Hallie found each other as they were putting their lives together again after such sadness,” Biden also told Page Six in 2017. “They have mine and Jill’s full and complete support and we are happy for them.”

Later, in 2019, Hunter spoke to The New Yorker about asking his father to publicly make a statement about his new relationship.

“I said, ‘Dad, Dad, you have to.’ He said, ‘Hunter, I don’t know if I should. But I’ll do whatever you want me to do.’ I said, ‘Dad, if people find out, but they think you’re not approving of this, it makes it seem wrong. The kids have to know, Dad, that there’s nothing wrong with this, and the one person who can tell them that is you.’ ”

In April 2019, it was reported that Hunter and Hallie had amicably split after a two-year relationship.

Now, in his memoir, Hunter has explained how the relationship came to be, why it ended and the professional consequences of it all.

"I was at my lowest, she was at her neediest, and we clung to each other with abandon. We talked at length about how much we had come to rely on each other, how our health and well-being seemed dependent on the love we’d grown to share," Hunter writes in 'Beautiful Things'.

"There’s no question about the unseen force in the middle of it all: Beau," Hunter writes, adding that they'd thought "that by loving each other we somehow could love him back into existence".

"It was an affair built on need, hope, frailty, and doom," he explained.

The lawyer said they parted ways after two years because they "were both too enmeshed in our own problems to be capable of helping each other".

He also shared that he lost most of his clients because of their relationship.

During an interview with CBS this past week, Biden talked about the public reaction to him dating his brother's widow.

"I think people were confused by it. And I understand that. I mean, I really do. To me, it's not something that is difficult to explain. Because it came out of a real overwhelming grief that we both shared. And we were together, and trying to do the right thing. And that grief turned into a hope for a love that maybe could replace what we lost," he explained. "And it didn't work."

In May 2019, Hunter Biden proposed to a woman, Melissa Cohen, after less than a week of knowing her. A month later, they married and have since welcomed a child into the world. 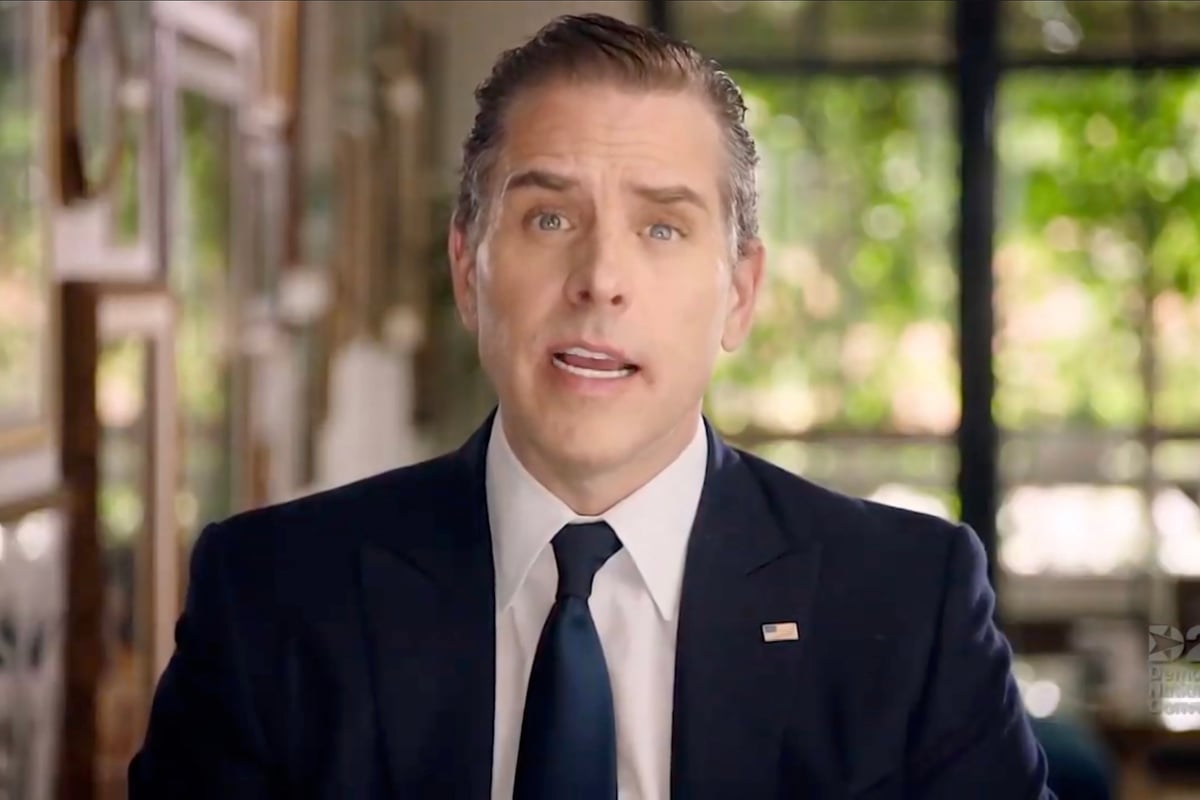 Hunter Biden during the Democratic National Convention in August this year. Image: Getty.

Indeed, it’s been a life of personal twists and turns. Throughout it all, Hunter has also suffered from well-documented alcohol addiction and drug abuse.

In October 2014, the Biden family faced media attention once again when it was reported Hunter had been discharged from the Navy Reserve after testing positive for cocaine.

Although Joe Biden didn't comment on the matter, Hunter shared his own statement at the time.

"It was the honour of my life to serve in the US Navy, and I deeply regret and am embarrassed that my actions led to administrative discharge," he said, according to CNN.

"I respect the Navy's decision. With the love and support of my family, I'm moving forward."

In the first presidential debate in September, Trump used this addiction against his opponent, Joe Biden.

"Hunter got thrown out of the military. He was thrown out, dishonourably discharged for cocaine use," said Trump, "and he didn't have a job until you became vice president."

Biden has been open about his addiction, telling The New Yorker he began experimenting when he was a teenager.

“Look, everybody faces pain,” he said. “Everybody has trauma. There’s addiction in every family. I was in that darkness. I was in that tunnel—it’s a never-ending tunnel. You don’t get rid of it. You figure out how to deal with it.”

In his memoir, Biden talks openly about his addictions, writing in the prologue: "I’m a 51-year-old father who helped raise three beautiful daughters. I’ve bought crack cocaine on the streets of Washington, DC, and cooked up my own inside a hotel bungalow in Los Angeles. I’ve been so desperate for a drink that I couldn’t make the one-block walk between a liquor store and my apartment without uncapping the bottle to take a swig."

He says he has now been sober since he married Melissa Cohen in 2019.

Reply
Upvote
2 upvotes
Hunter is sketchy to say the least.  If it were one of the Trump children accused of similar dealings with foreign companies, I bet the media would be all over it.
L
laura__palmer 2 years ago

Reply
Upvote
1 upvotes
@guest2 The media is all over it. And, Hunter isn't running for President. Trump's daughter is pretty sketchy, too, and she works in the White House. A bit more concerning, I think.
Trump has a Chinese bank account, by the way. Paid more tax there than he did in the USA. Also more concerning than Hunter Biden.
G
guest2 2 years ago

Reply
Upvote
1 upvotes
@laura__palmer If the media are all over it, then why did Twitter attempt to shut down the story featured in the New York Post and NPR refused to run the story stating, 'We don't want to waste time on stories that are pure distractions'?   Why is it unreasonable for there to be media insight into the business dealings of the son of the possible future President, when those deals have involved countries, (China and Russia) which were important foreign policy zones under recent Democrat Presidents?   Same goes for James and Hunter Biden's deals with nations that Biden had visited when VP.
As for Trump's bank account in China, so what?  As a businessman he probably had bank accounts all over the place and Trump publicly ststed he closed that bank account prior to his Presidential bid.   Whatever you might think of Ivanka (and I am of the opinion she should have no role at all in White House affairs), she isn't mixed up with what could be shady business deals.
News
General
Opinion
True Crime
Politics
Sport
Explainer
Entertainment
Celebrity
Reality TV
Movies
TV
Books
Rogue
Royal
Lifestyle
Beauty
Fashion
Weddings
Home
Wellness
Health
Fitness
Travel
Food
Parents
Before The Bump
Pregnancy
Baby
Kids
Teens
School
Parent Opinion
Work & Money
Money
Finance
Career
Lady Startup
Relationships
Sex
Dating
Separation
Friendship
Family
Real Life
Couples