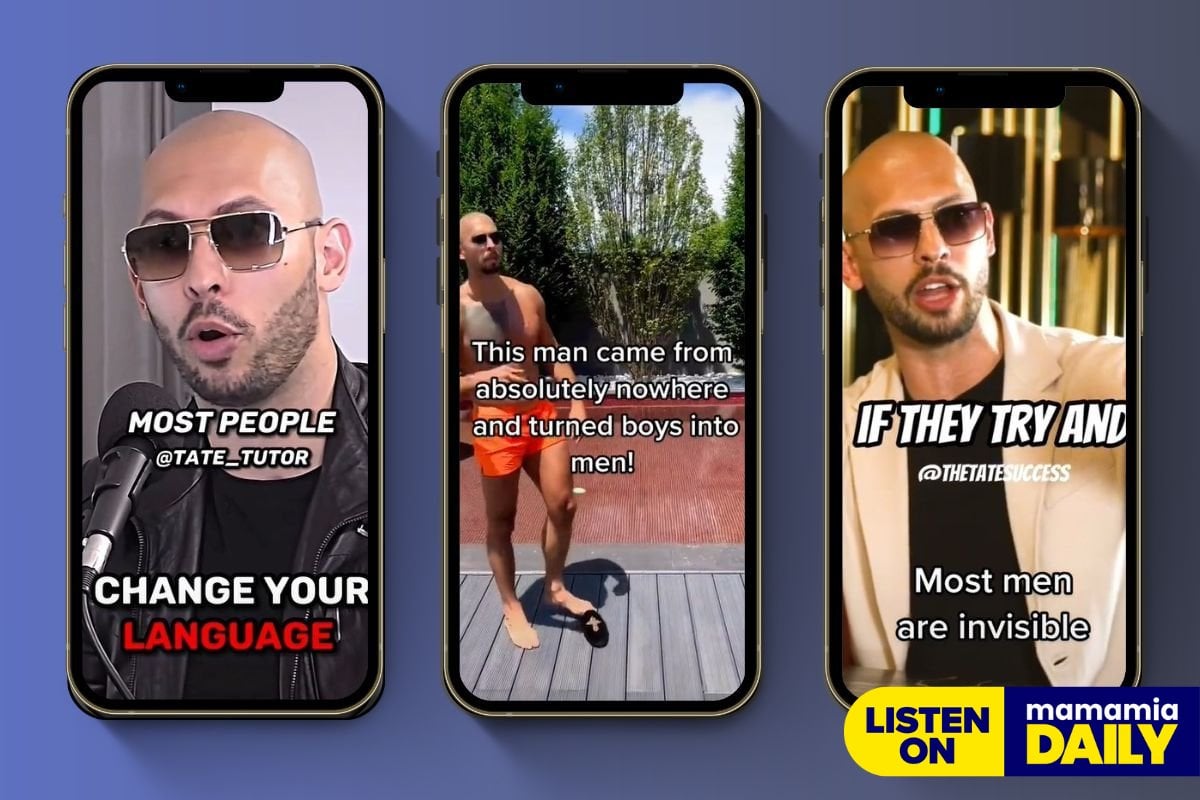 Warning: This post mentions domestic violence and graphic descriptions of abuse and may be triggering for some readers.

This week I found myself in a hole. A TikTok hole.

I'd been seeing one particular man popping up in my feed a lot. He was misogynistic, rude, bigoted and problematic. So, buoyed on by my annoyance, I decided to dive further.

What I witnessed, when I properly delved into the depths of 'Andrew Tate Tok', terrified me.

Tate is a British-American former professional kickboxer turned entrepreneur and content creator, who runs an online course in "modern wealth creation" at his self created 'Hustler's University.' He touts himself as 'one of the most famous men on the planet,' and in 2016 appeared on Big Brother UK.

On Instagram, he has 3.4 million followers. On TikTok, he has 1.4 million, but videos of him have surpassed five billion views. He has numerous podcasts including Tate Speech and Jet Talk, and he's a big deal on Twitch; an interactive livestreaming service for gaming, music and sport.

The 35-year-old is currently the most viral person in the world. More people are searching for his name on Google than Kim Kardashian.

He thinks suicide is for cowards.

He likes Donald Trump because he's "grabbin' bitches by the pussy," and "I like that."

He questions "why women are allowed to drive" and says that if women see themselves as equal to men they're the "exact kind of woman that I would never give my time of day to."

He refers to women as "my female" or "his female," because he believes we belong to men.

In fact, if a woman has an OnlyFans account and a boyfriend, he thinks she owes him half of her earnings, because by his logic, she belongs to him.

He has compared women to dogs.

When the #MeToo movement began he tweeted, "Women have been exchanging sex for opportunity for a very long time. Some did this. Weren’t abused. […] If you put yourself in a position to be raped, you must bare some responsibility."

In a since deleted video, he admitted that he moved to Romania in 2017, because it's easier to get off rape charges there.

According to Tate, men can cheat all they want because if they love their girlfriend at home, sex with others is only "exercise." But if a woman even talks to another man, it's cheating.

Watch him make this point below. Post continues below.

In one video, Tate reenacts a woman saying to him, upset, "you cheated, you cheated."

"It's bang out the machete, boom in her face, then grip her up by the neck," he says, complete with hand gestures.

In what was probably the most troubling video I saw in my travels online, Tate can be seen filming a girl in her underwear, walking around a house.

"What are you moaning about woman?"

"Because I've been beaten."

"Because you're a jerk. Show me the bruises."

The girl then walks away and locks a door, to which Tate yells, "Oh yeah, lock the door you f**k. You knew I was going to beat the f**k out of you. If you behaved, I wouldn't have to hit you."

I will spare you anymore examples. But this is a man who was charged in 2017 by British police with 11 cases regarding sexual assault. In April 2022, his home was visited by Romanian police as part of a probe into allegations that a woman was being detained at his home against her will, was being trafficked, and had been raped. That investigation appears to be ongoing.

As horrendous and dangerous as this man is, it's who he is influencing that worries me more.

It's the millions of young boys who worship him. Who call him the 'king of toxic masculinity' as a compliment.

This is a man who is introduced on other people's podcasts as a man who "teaches the importance of masculinity, dating and business." 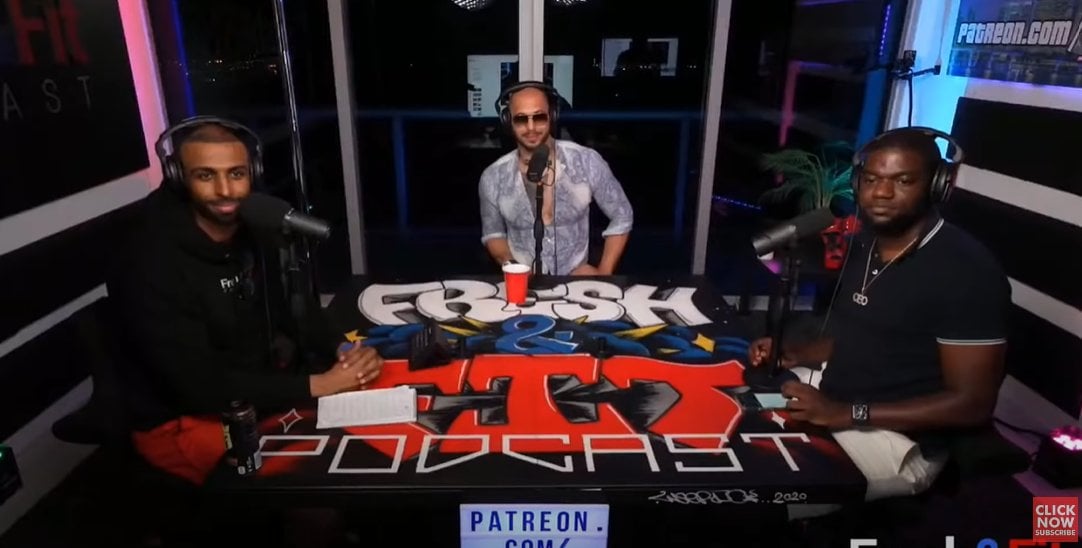 On this particular pod, the men discussed Tate's five girlfriends who "didn't know about each other". Image: YouTube.

His following and fame is akin to that enjoyed by Joe Rogan or Jordan Peterson; young, impressionable teenagers and men, who look up to these controversial, misogynistic men as their masculine role models.

The comments on Tate's videos shared by the majority of other platforms are, thankfully, encouraging. Men and women alike perplexed as to how this man is getting away with spouting such damaging nonsense.

But it's the comments on his own platforms, and the 'fan videos' littered across TikTok that show the extent of the damage he's causing.

Tanjeet is eight. He is a follower of Tate.

"He made a fan page," Tate said on TikTok. "This kid is super hilarious. So Tanjeet, what he does is, he keeps my hoes in control for me. So if I have a hoe and she ain't in control, I can just get Tanjeet and say, 'Look, deal with this hoe,' and he'll inbox her and be like, 'Hey hoe woman, you're out of control. You need to do as sir says, blah blah blah.'"

Martin appears to be about 17, if I was to hazard a guess from his online profiles.

He's also a follower of Tate.

"Hey whore, go make me a sandwich in the kitchen," he jokes in a TikTok.

"You're lucky you're even talking to me; I'm a high value male... females don't deserve rights, that's my opinion. "

On one faceless fan account, the voiceover told me, "They, [women] only say he's misogynistic because it interferes with their ability to control modern men into doing the things they want to do. Women are scared to lose their simps... scared they cannot get married anymore because they cannot emotionally manipulate weak beta males."

I know I have only skimmed the surface.

But, honestly, sifting through his fan videos was making me feel sick. These are young boys. Teenagers. Young men. All falling into line behind a woman-hating bigot. They all talked like him. Beefed up their chest at the camera like him. Mimicked him.

What terrifies me about the power of someone like Andrew Tate is, we all know how social media algorithms work. You hover on one video a nanosecond too long, and TikTok will feed you more.

As an adult, I find it hard to pull myself out of the TikTok scrolling vortex sometimes. What hope do kids and teenagers have?

Right now he's everywhere. He's all over TikTok and YouTube and Twitch. He's in your teenager's feed.

And here's the thing. He promises to help you get 'wealthy'. He promises community. He promises a safe space for men to feel how they want to feel and be strong, powerful 'alphas.' On the surface, his message is attractive. Especially to young, impressionable boys.

What he's actually doing is turning them into hateful, disrespectful abusers of women.

Reply
Upvote
1 upvotes
If you like a light, scary stories podcast, check out the other Andrew Tate. He is nothing like this guy, just reads out listener submissions on his podcast Let's Not Meet. I feel so bad that this lovely guy shares a name with this massive creep!
K
kelly_p 12 days ago