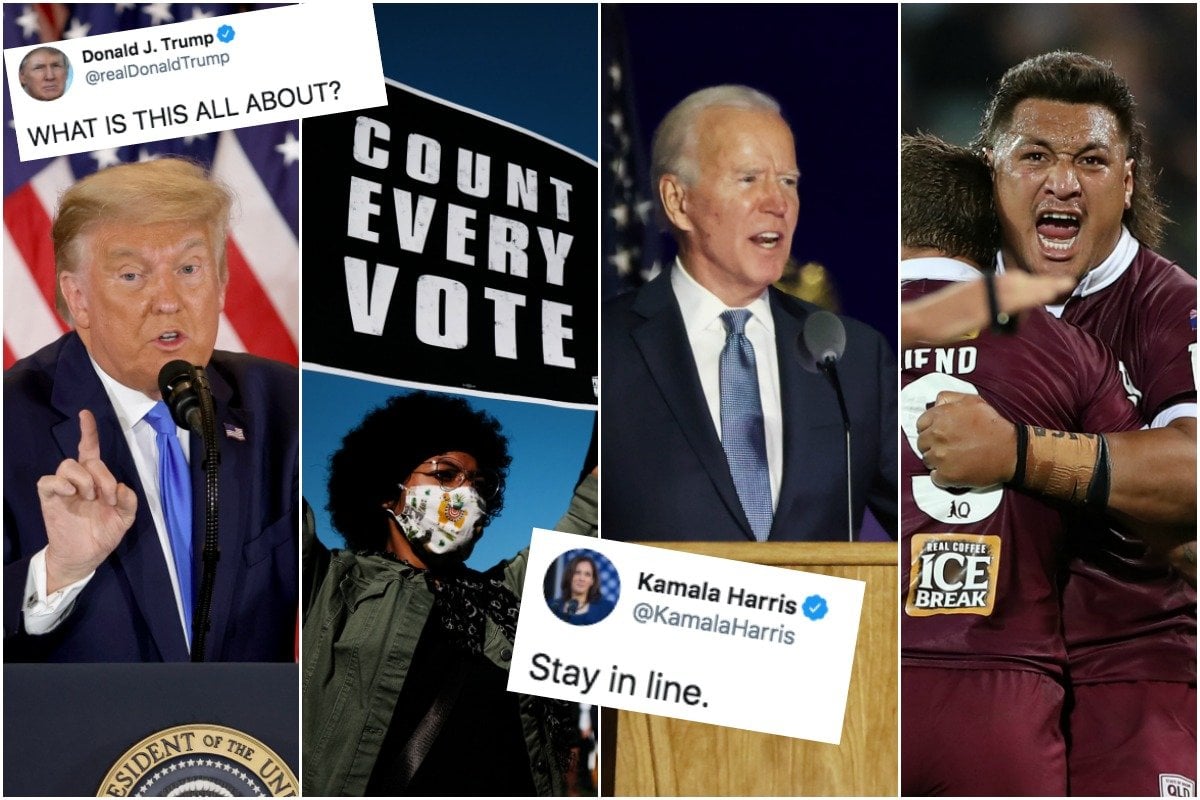 President Donald Trump’s reelection campaign has already said it will “immediately” call for a recount in Wisconsin, with confirmation this morning Biden has successfully 'flipped' the state in the United States presidential election.

In a speech at 8am AEST, Biden declared, "After a long night of counting, it is clear that we are winning enough states to reach 270 electoral votes needed to to win the presidency."

"I am not here to declare that we have won, but I am here to report that when the count is finished we believe we will be the winners."

But Trump's camp has made it clear they won't be taking the votes at face value, and will be taking the results to court. Donald Trump’s campaign has this morning filed a lawsuit to halt the counting of ballots in the swing state of Michigan where Biden is narrowly ahead claiming they hadn't been provided "meaningful access to observe the opening of ballots".

While Australia was sleeping:
- Joe Biden took the lead in Michigan
- Donald Trump filed for a recount in Wisconsin

Trump appears to have changed his tune from an early morning press conference in which he prematurely declared victory, he's since started furiously tweeting, with claims the Democrats are "finding Biden votes all over the place".

"They are working hard to make up 500,000 vote advantage in Pennsylvania disappear — ASAP. Likewise, Michigan and others," Trump wrote.

Many of his tweets today have been flagged as misinformation.

In an profound statement from the White House on election night, the president said he wanted all vote counting to stop calling the election a "fraud on the American public." 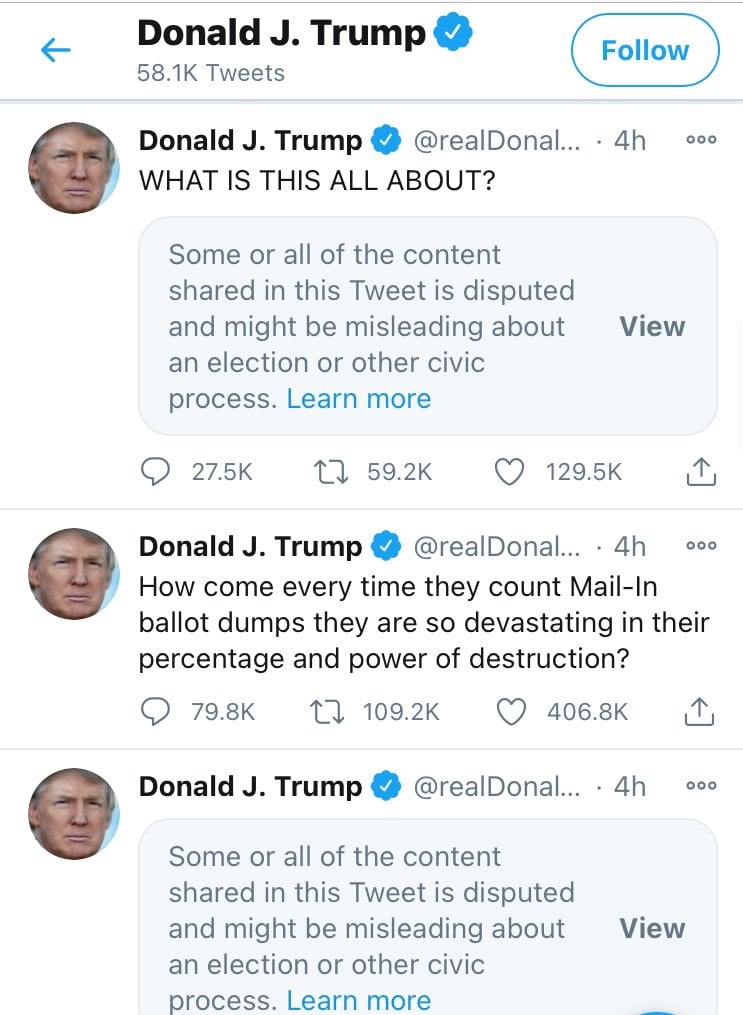 At about 4am AEST time, Joe Biden's campaign manager said that Biden only needs "three or four more" states to get him to the required 270 electoral college votes, and that the team is currently regarding it as a "foregone conclusion".

Even if Biden wins the White House however, it's likely Republicans will maintain a grip on the US senate.

"I think tonight's results demonstrate what I've known my entire life, which is that the residents of this district are fair-minded, and they're looking at candidates' ideas and not their identity," she said.

A Republican candidate for the House in North Dakota who died last month from coronavirus appears to have also been elected to the state legislature.

Scattered protests have popped up in Washington DC, Seattle and New York City, but across the US there were no signs of serious violence or widespread unrest immediately after the polls closed, as was feared.

However, more than 100 events and marches have been planned for today to 'protect the results' of Tuesday's vote, with tensions starting to climb.

Tension is brewing across the United States as protesters take to the streets amid the vote count. #9Today pic.twitter.com/o0E1Gwg40X

Queensland's unlikely bunch of rookies have pulled off a State of Origin miracle, coming from behind to claim a 18-14 win over NSW.

Fielding eight debutants and the biggest outsiders for an Origin match in more than 20 years, Queensland looked gone at 10-0 down at halftime on Wednesday night at Adelaide Oval.

The Maroons then scored three tries in the space of 14 minutes, with Kurt Capewell superb on debut with man-of-the-match Daly Cherry-Evans and Cameron Munster just as influential.

"I'm not sure what category you put it in (as far as big wins go)," coach Wayne Bennett said.

"They were reasonable questions (about our ability). It's not luck it happens the way it happens. The way they came to together at the camp. There has been a lot of restrictions on them. They overcome everything to come here tonight and play as a team, play as a Queensland team."

British MPs have approved a month-long lockdown in England, voting in favour of Prime Minister Boris Johnson's plan to try to prevent COVID-19 running out of control and overwhelming health services.

People will be ordered to stay at home from Thursday morning to combat a surge in new infections that could, if unchecked, cause more deaths than a first wave which forced a three-month lockdown earlier this year.

The 516-38 vote had been in little doubt after the opposition Labour Party said they would support the move, even though they criticised Johnson for acting too slowly.

MPs have overwhelmingly backed new lockdown restrictions in England which come into force from Thursday, voting 516 to 38 https://t.co/wnCPfzzDxA

He was also criticised by some in his own party who said a general lockdown was too severe.

"None of us came into politics to tell people once again to shutter their shops, to furlough their staff or stay away from their friends and family," Johnson told parliament in an attempt to calm rebels within his Conservative Party.

The United Kingdom, which has the highest official death toll in Europe from COVID-19, is grappling with more than 20,000 new coronavirus cases a day and scientists have warned the "worst case" scenario of 80,000 dead could be exceeded.

Fallen AFL star Ben Cousins will remain behind bars for at least another fortnight after being convicted of stalking his ex-partner but acquitted by a Perth court of restraining order breaches.

Cousins had pleaded not guilty to the charges, including 20 counts of breaching a family violence restraining order relating to his ex-partner, Maylea Tinecheff, in April this year.

Fallen AFL star Ben Cousins has been found guilty of stalking his former partner by bombarding her with 165 phone calls and showing up to her home - but could potentially be freed from prison within weeks. 🔒 https://t.co/YqZoXNJPF3 #wanews #perthnews #Court pic.twitter.com/n36JVqAJ8j

On Wednesday, magistrate Brian Mahon delivered his reserved decision, sentencing Cousins to seven months in prison but backdating it to his April 22 arrest.

Ms Tinecheff said during last week's trial that Cousins had relentlessly tried to contact her and their two young children despite being prohibited from doing so.

She and the children moved house in April because Cousins' behaviour was "out of control", she said.

Mr Mahon said regardless of his intent, Cousins had bombarded Ms Tinecheff with text messages and phone calls, including as many as 29 in one day.

NSW Premier Gladys Berejiklian says while opening the border with Victoria is a "calculated risk", the decision is based on advice from the state's health department.

The border between NSW and Victoria will open on November 23, Ms Berejiklian announced on Wednesday, as Victoria recorded its fifth consecutive day of zero coronavirus cases.

On Monday, 23 November – the NSW/Victoria border will reopen. We need to keep moving forward as we live with COVID-19. I have confidence that everyone will continue to work hard to keep everyone safe.

"With that there comes a level of risk. We accept that," she told reporters.

"We believe it is a cautious risk, a calculated risk and we're confident our health system and the processes we have in place in NSW will allow that to happen.

"Very proudly I say NSW will be the only jurisdiction in Australia that will be welcoming residents of all states, of all jurisdictions."

This morning Victoria has confirmed its sixth day in a row of zero new coronavirus cases.

Yesterday there were zero new cases and zero lives lost. The 14 day average is 1.4 and there are 2 cases with an unknown source. More info here and also later today: https://t.co/pcll7ySEgz #COVID19VicData pic.twitter.com/YvGacx1fiV

Australia will have access to 134 million doses of coronavirus vaccines after the federal government secured two more agreements.

Prime Minister Scott Morrison on Thursday will announce a deal with Novavax to supply 40 million vaccine doses and Pfizer-BioNTech for 10 million doses.

This brings the government's COVID-19 vaccine investment to more than $3.2 billion, adding to deals with University of Queensland-CSL and Oxford-AstraZeneca.

"The goal and the expectation is that Australians who sought vaccination will be vaccinated within 2021," Health Minister Greg Hunt says.

Health and aged care workers, and the elderly and vulnerable will be the first to gain access to a vaccine.

- Germany is scouting trade fair halls and airport terminals to use as potential mass vaccination centres as it draws up plans to to inoculate people as soon as the first coronavirus shots are approved.

- 12 people have been killed in a powerful blast at a warehouse storing chemicals in India.