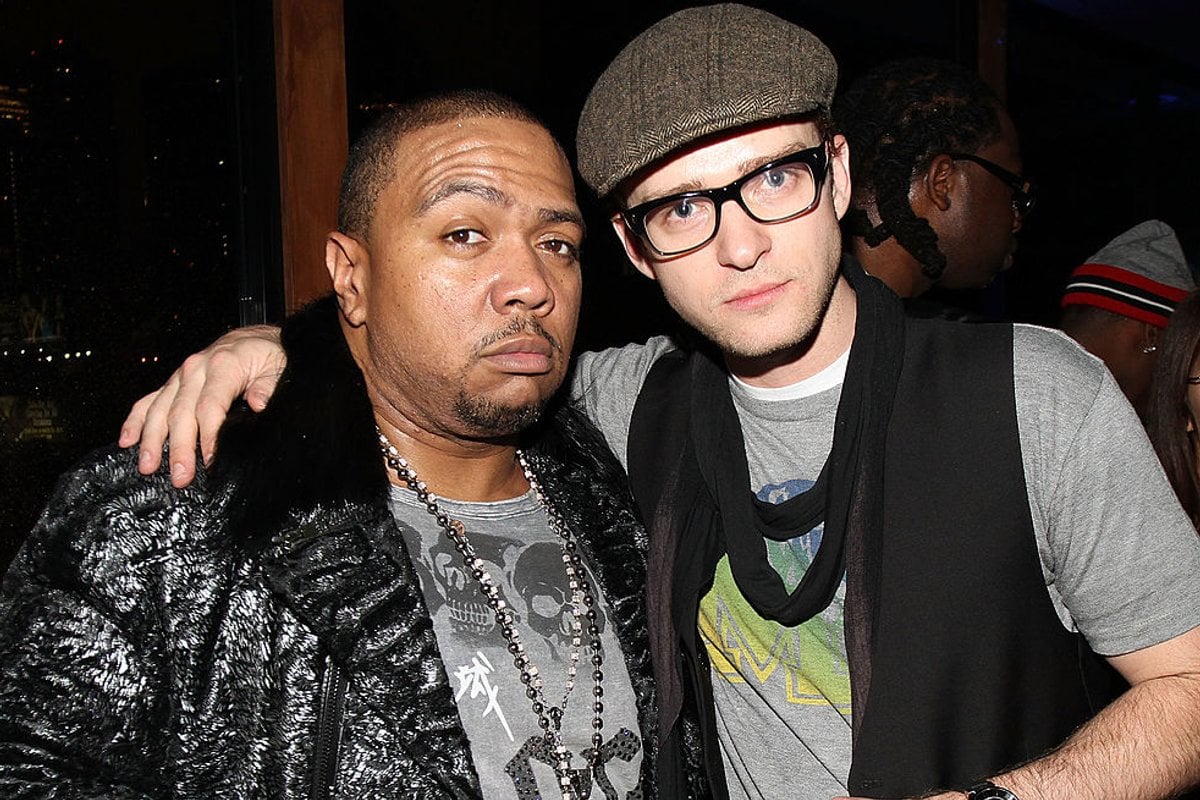 When he was 17, he was producing Missy Elliott.

A few years later he was working with Aaliyah.

He’s been behind some of the biggest albums of the past three decades, by artists including Nelly Furtado and Justin Timberlake.

But just a few years ago, legendary hip-hop producer Timbaland – born Tim Mosley – was addicted to pills and on the verge of losing everything that mattered to him.

Watch: Characters who would OWN the pandemic. Post continues below.

Mosley grew up obsessed with music, forming a group with fellow student and future superstar Pharrell Williams while still at high school.

He was DJing and producing an album for the as-yet-unknown Elliott and also washing dishes at a Red Lobster restaurant when he was shot in the neck, with the bullet lodging in his shoulder. He was paralysed on his right side for nine months.

“If you get shot and you survive, you feel like you’re an Incredible Hulk,” he told EW.

Mosley brought his distinctive sound to the album, One In A Million, and changed R&B forever. He kept working with his childhood friend Elliott – "She was just super dope... she was God-sent, that was my sister" – delivering unforgettable songs like “Get Ur Freak On” and “Work It”. He also co-wrote and produced Justin Timberlake’s hit inspired by Britney Spears, “Cry Me A River”.

Despite his career success, he was unhappy with his appearance, and it affected him deeply.

"I was almost 400 pounds [181kg],” he told True Hollywood Story. “Who wants to be a 400-pound black man? I'm looking in the mirror, my breast is bigger than a girl breast. And I was saying, ‘That ain't cool.' So I got very depressed, like suicidal depressed."

In 2003, Mosley took time out from music to focus on going to the gym and losing weight.

Later he started going out with entrepreneur Monique Idlett. He already had a son himself, and took on her son as his own. They had a baby girl together, Reign, and Mosley proposed at the baby shower.

“When I first met my wife, I knew I was going to marry her because she looked like Aaliyah,” he admitted.

Mosley started his own label, Mosley Music Group, and the first album he put out was Nelly Furtado’s mega-successful Loose.

The single “Promiscuous” was a number-one hit, but Mosley says Furtado was reluctant to record it at first.

“I told her, ‘You can’t be that same Nelly Furtado laying on the grass playing with birds,'” he told EW.

He dominated the charts, with dozens of hit songs. Everyone wanted a bit of his magic: Beyonce, Madonna, Bjork, Samantha Jade, New Kids On The Block.

Then, in 2011, things started going bad for Mosley again.

According to a profile in Men’s Health last year, he started abusing OxyContin and Percocet after being given a prescription for painkillers following dental work.

His old bullet wound in his shoulder started giving him trouble again, and he took more pills. He went through a long, messy divorce, and was chased by the IRS for $4 million in unpaid taxes. The pills helped.

“It put me in a great feeling of not caring, of just being free,” he told Men’s Health. “I’m like travelling, doing shows, popping ’em, having fun, just being ignorant.”

He put weight back on and developed prediabetes. Then, one night he had a nightmare that he was near death.

Wanting to stay alive for his kids, he vowed to turn his life around. He sorted things out with his ex-wife – by then he had a new girlfriend, Michelle Dennis – and paid his tax bill.

Then he kicked his addiction to pills, going through withdrawal all on his own. He said it was “one of the toughest things I’ve been through”.

“The only things that got me through it were my kids, my girl, the help of God keeping my mind still.”

Timbaland is still in music, but he spends a lot of his time teaching and working with young artists. In 2019, he released his first children’s book, Nighttime Symphony.

“I relate to kids so much,” he told Fatherly. “And it’s always been hard for me to go to sleep.”