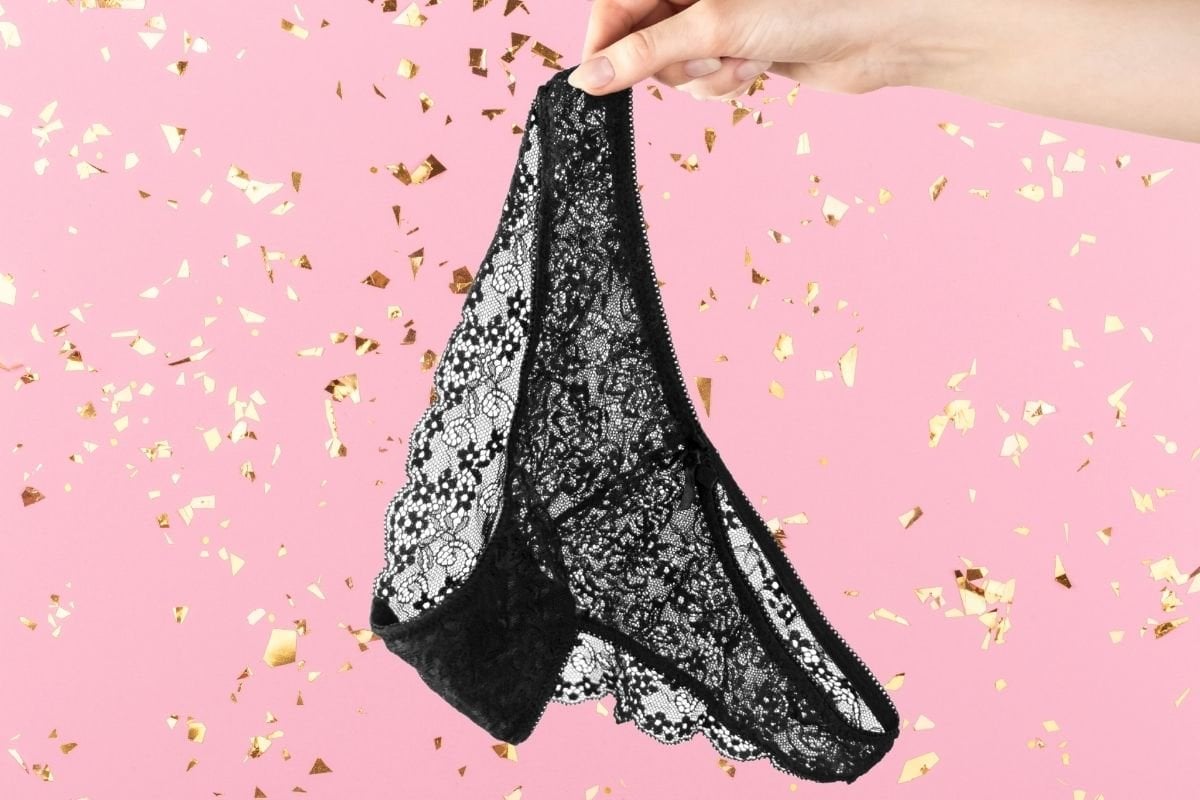 What a headline! What a hook! Are you nervous? We are. We're freaking out and we're the ones that wrote this. The suspense!

Okay. Before we start, can we please get a show of hands for those who are still hanging onto underwear that's, like, eight years old (+++)?

You know, the pair that were your 'good' underwear and have now leveled up and made it to the 'period' underwear status because they're comfy AF and may or may not have some cute stars on them or something?

You might want to take a seat for this one.

Because apparently your underwear actually has an expiration date... and we need to talk about it.

Watch: Speaking of undies and vaginas and such, how well do you know your lady garden? Let's find out! Post continues below.

It all started when we were innocently slinking around TikTok and came across this little tidbit from user @kittychemist:

In case you couldn't be effed, it basically says you should throw out your underwear every six to twelve months.

SIX TO TWELVE MONTHS, YOU GUYS.

I mean, aside from your stretched out beige undies being aesthetically gross and unappealing to the eye (though VERY comfy indeed), is it unhygienic to wear really old underwear? Are we just really gross people?

Do you really need to throw out your underwear every six months?

Because you can't quite believe everything you see on TikTok (spoiler!), we had a quick Google search to find out if this was actually a real thing.

This was when we stumbled across an article by The Good Housekeeping Institute (GHI) that said, yeah - you should defs be binning underwear after a year of use, to reduce the risk of infections.

The site says hanging onto your butt huggers for longer than a year allows bugs such as E. coli and dust mites to flourish, causing ~problems~.

But this begs the question: if you're washing your underwear on the reg, how is this a thing? Shouldn't a wash cycle kill all the bad bacteria and keep things fresh downstairs?

Well, the GHI guide says that even if you're washing your undies after every use (because, obviously), most people’s clean underwear contains up to 10,000 living bacteria.

W-wa-wait! Before you go ahead and empty the entire contents of your underwear drawer into the bin, it's probably worth finding out if there's any solid scientific evidence supporting the expiration date of undies, no?

Because, according to medical experts, there's no *specific* rule when it comes to throwing out your underwear, and The Royal Australian and New Zealand College of Obstetricians and Gynaecologists (the industry body of OB/GYNS) gives no official guidance as to how often you should actually throw out your underwear.

"Underwear should really only be worn once before you wash them, as they provide a great opportunity for bacteria and fungus to breed," said Calfas.

"Without getting too graphic, underwear are used in areas that are warm and moist, and exposed to bodily excretions constantly throughout the day. All of these conditions provide a mecca for bacteria and other microorganisms to grow in."

While there is a study that suggests there might be about one-tenth of a gram of fecal matter (so, damn, gross) kicking around in the average pair of 'clean' underwear, if you chuck them in the washing machine and switch the setting to Very Bloody Hot, it should be enough to kill *most* of the bacteria.

It won't exactly kill all the organisms, but the bacteria that does decide to linger in your pants won't be enough to cause any real harm (cause it takes a certain amount of bacteria to really mess s**t up and cause an infection).

Oh, and just make sure they're *actually* dry before you put them away.

"The greatest risk when it comes to wearing old underwear is the hygiene factor. How clean are they? Have they been washed properly? Were they allowed to dry properly before being put away?," said Calfas.

Pssst! Have a listen to this cracker episode of You Beauty, Mamamia's beauty podcast for your face. Post continues after podcast.

"Damp underwear provides opportunities for more bacteria and fungus to grow, which is not exactly what you want to be putting so up close and personal to your body as it can lead to the development of infections."

So, yeah. From a medical and scientific point of view, throwing out your underwear every six to nine months isn't something you absolutely *need* to do - as long as your chucking on a fresh pair every day and washing them after each wear.

"As long as they are in good condition and they are kept clean, then there is no real guideline as to how long you should hold on to them," confirm Calfas.

And obviously common sense rules apply here: If a pair of undies has a funky stench, has completely lost elasticity (umm...), or has holes - it should be a pretty solid sign you should toss them.

If none of the above applies to your favourite pair of undies - you have our permission to hold on to them for that little bit longer, kid.

Of course, if you're experiencing yeast infections and such on the regular, it's probably a good idea to check in with a gynaecologist or GP to discuss potential causes.

Reply
Upvote
'Big Undie' - good one...hahaha! And  I have two things to add-wash that butt, - at least at home by getting a tap attached-or an amazing loo seat, and wear merino wool undies... waaaay more hygienic...
F
fightofyourlife a year ago