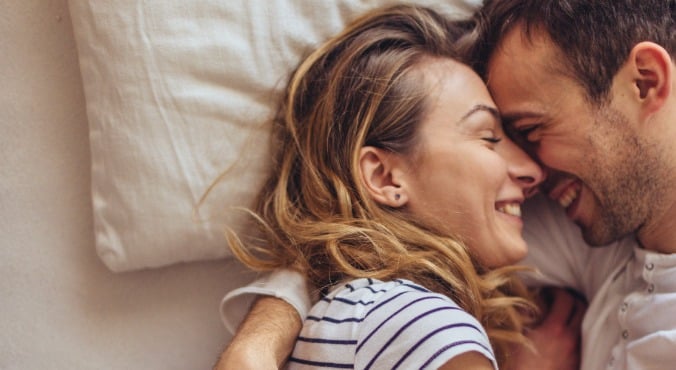 I. Love. You. How can three words, three syllables, be so significant — and so very fraught?

In movies, the “love” declaration usually occurs in the wake of some dramatic event, and happens in a way that’s at once romantic, creative and highly emotional (accompanied by a soundtrack of swelling violins).

In the real world, it’s usually a little clumsier than that — and there’s no blueprint for when it’s time to utter those magical words.

That said, a recent survey of 2000 people suggests most couples say “I love you” roughly five months (or 114 days if you’re really into specifics) into a relationship. This tends to coincide with a bunch of other dating milestones, like confirming the union on Facebook (157 days) and embarking on the first argument (170 days).

However, just as no two couples are the same, love declarations don’t always happen within a specific timeframe. Sometimes, those three words come hurtling out just days into a relationship; other times, it takes a year or more. Here are the stories from our office.

“Very awkwardly, my now-husband said ‘I love you,’ after two weeks of dating while drunk in the back of a taxi.”

2. Even drunker in love

“It was actually one month in and we were at a party. I was rather drunk and was so taken back that I can’t even remember how I replied. I think I managed to mumble it in return. It then became a regular thing we said to each other, but I don’t think I truly meant it ’til around three months. Now I’m the one who says it the most!”

Watch: Advice for dating in your forties. (Post continues after video.)

“Three months. My husband was a best man for his best mate. They were nice enough to invite me, even though I’d only met them like four weeks prior. My husband got OFF HIS TITS drunk and pulled me outside to tell me something really important. He looked so concerned I thought someone had died. He says, “I’m in love with you,” and then he nearly cried. I said, I love you too. Then he asked me if I wanted to go fool around on the golf course across the road.”

“My boyfriend accidentally said it really early on when we were playing a game of Articulate at his mate’s place. We nailed our round and he was like ‘YES, I LOVE YOU!’ Cue crickets from entire group.”

“I said ‘thank you’ in response every time for about about one to two months. Surprised he stuck around. I always felt so bad but didn’t want to say it and not mean it 100 per cent. Very awkward, now I reflect on it.”

"Less than a week in. We’d known each other socially for about five years but only seen each other in a group context, and then with the advent of Facebook chat in 2008 we got to talking A LOT. Eventually we ended up going on a series of old-fashioned dates. I think at the time we were both so taken aback by our feeling each was too scared to make a move so nobody did. By the time we were going ‘steady' things were very serious - we were both hooked and so we’d said 'I love you' within a week. It was zero to 100."

"I said 'I love you' and he said nothing. And then we broke up." (Post continues after gallery.)

"I said it about three months in completely accidentally when I was kissing him goodbye to go to work. He was in bed with his eyes closed but he just started smiling and then I was mortified so I ran out the door!"

"About nine months in, I said it while we were reading in bed. Much romance. NB: He did say it back."

"It was 10 weeks in, we were just hanging out at his house, I said it, he said it back. A week later he told me he only said it back because he felt awkward and his feelings towards me were more of an 'infatuation' as opposed to #truluv. Two weeks later he decided he did actually love me and told me so."

When did you first say 'I love you'?