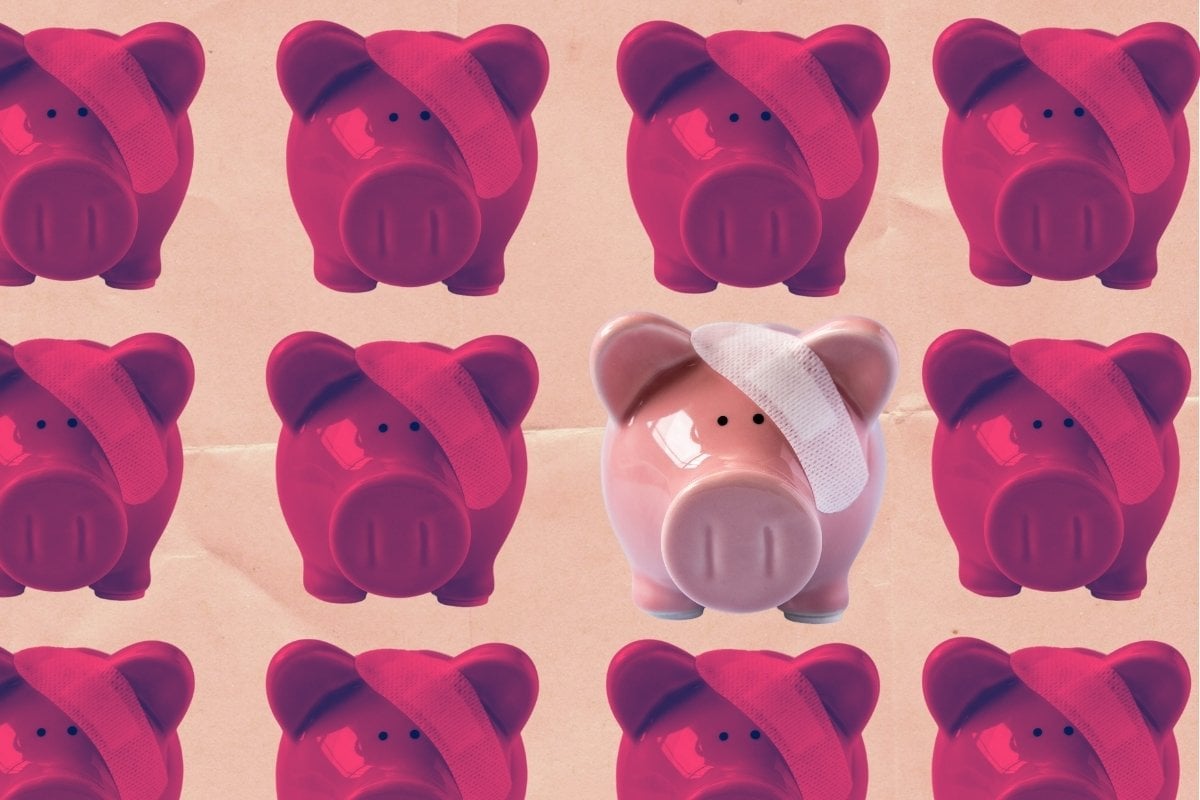 Most women are accustomed to being confronted with advice. About our bodies, our behaviour, parenting methods, about managing careers, relationships and finance.

Much of it is unsolicited; even more of it, unqualified.

And when it comes to money management, in particular, that can have life-altering consequences.

With this cacophony of counsel, it's little wonder that research by the Australian Securities and Investments Commission found that 41 per cent of Australian women feel 'stressed or overwhelmed' about dealing with money.

Mamamia asked women to share some of the most questionable, or downright nonsensical, financial advice that's been heaped upon them over the years.

Here we sift through some of the most common, with expert insight from the founder of Talking Money, Melissa Meagher — a money coach with over 20 years of experience in the financial services industry.

'My parents told me, "Don’t go into debt." If only we had borrowed heavily, we could have an amazing property portfolio by now!'

This is based on the idea that debt is always a negative thing, which is not necessarily true according to Melissa.

She explained that debt is often referred to as one of the following: bad debt or good debt.

'Bad debt' includes that from credit cards, personal loans, buy-now-pay-later services and so on.

"There's absolutely no benefit, no tax relief, from having that debt in place. And a lot of times, you're paying very high interest rates as well," she said.

"Then there's what we call 'good debt', which is borrowing to build wealth. So buying an investment property or portfolio, investments — that sort of thing."

She doesn't love the value judgement in those 'good' and 'bad' labels. And her advice is the same for both: "Something I talk to people about often is reviewing your debt situation on a regular basis and making sure that it's as efficient as possible. That means minimising the amount of interest that you're paying."

"Australians, particularly, we've got this huge mindset that you have to buy a property and you have to pay it off... But it's not the actual be-all and end-all," Melissa said.

The STD That's More Common Than You Think

"Everyone's circumstances are different. So renting might be beneficial and appropriate for someone and not for someone else. And there are pros and cons of both.

Listen: The Quicky looks into whether renting for life is as bad as we're being told and whether buying a house is still the Australian dream. Post continues after podcast.

'We were told not to use a credit card. Rubbish. Our credit card works for us; we pay it off in full every month and it’s due after our mortgage interest is calculated, so we pay the minimum interest on the mortgage. We also earn enough rewards points (as we put everything on it) to pay for most of Christmas.'

"Now, that's a perfect world. A lot of people intend to do that when they take on a credit card and then, out of left field, something will happen. And so the money that was allocated to pay off the credit cards has had to be used for the fridge blowing up, or something like that. And then it tends to get into this downward spiral."

Melissa said it's therefore important to be informed (and realistic) about your cash flow and have a plan of attack to pay down debt — both expected and unexpected — when considering a credit card. Carefully weigh the pros and cons.

"People say, 'Oh, we use credit cards to get points' and all that sort of stuff, which is fine," she said. "But I always say go back and actually investigate what annual fees and so on you're paying to have access to those facilities. Because sometimes you're better off not having them, and actually just paying for the product in cash. So it's [important to be] educated and informed."

'Don’t buy a home yet; the Sydney housing bubble is going to burst. (This was 2013, luckily we didn’t listen and got into the market and rode it up. Our first home doubled in value in three years, which set us up for our future).'

"If you find a property that's in your price range and that's what you're looking for, then why wait?"

'We were told fix your home-loan rate while you can. It was at 8 per cent. Lucky we didn't listen.'

"At the time that could have been looking quite good! It's all relative," Melissa explained.

Again, she said, it's about what suits your circumstances. For example, if you're in a position to pay down your loan more quickly, a variable loan will give you that option, whereas you're very limited with how much you can pay down a fixed loan.

"So once again, there's no right or wrong, or good or bad; it's just different circumstances," she continued. "But having a foot in both camps is sometimes a good idea. Especially now with the rate so low, it could be worthwhile investigating fixing even a portion of it, for peace of mind."

'When applying for a loan, take the maximum amount the bank will give you.'

"If you can service it comfortably, absolutely," said Melissa. "But just because the bank says they'll lend you this money, doesn't mean that you necessarily should borrow it.

"People have got to be really, really clear on what their financial commitments are, what they want to spend on lifestyle, what their priorities are, and their goals and aspirations. That all needs to be factored into understanding how much debt they can comfortably service."

Rather than the bank offering a number to the customer, it ought to be the other way around, Melissa said.

"You should go to the bank knowing your numbers and saying, 'Well, this is [the amount] we can comfortably service. So what's our capacity to borrow based on that?'"

Before you take any personal finance advice, there's one thing you need: a grasp on your own situation.

Melissa uses the analogy of getting up in the middle of the night to go to the loo.

"You're fumbling around in the dark, and you know kind of where your furniture is, but you keep bumping into things and knocking your shins," she said.

"I think sometimes our personal finances are a bit like that. We're bumping around, we kind of know where things are, but it's not until we shine a light on our finances that we can understand exactly where everything is. And that's what makes us feel empowered and in control."

Some basic steps to get started in that process include:

Look through your statements for opportunities to free up money — are you paying for subscriptions you no longer use, for example?

Do a financial audit:

For the latter, divide your outgoing costs into two camps: fixed costs (anything you pay on a regular, ongoing basis that is usually about the same amount, e.g. mortgage, utilities, insurance, internet, membership subscriptions) and lifestyle spending.

"I suggest people track their lifestyle spending for 30 days just to see where and what they're spending their money on and whether they're comfortable," Melissa said. "Take the emotion out of doing this. It's just a data-gathering exercise; it's just numbers. Then you're in a situation to understand whether you need to be redirecting money into different areas."

If you are struggling with debt, free financial counselling is available through The National Debt Helpline. Call 1800 007 007.