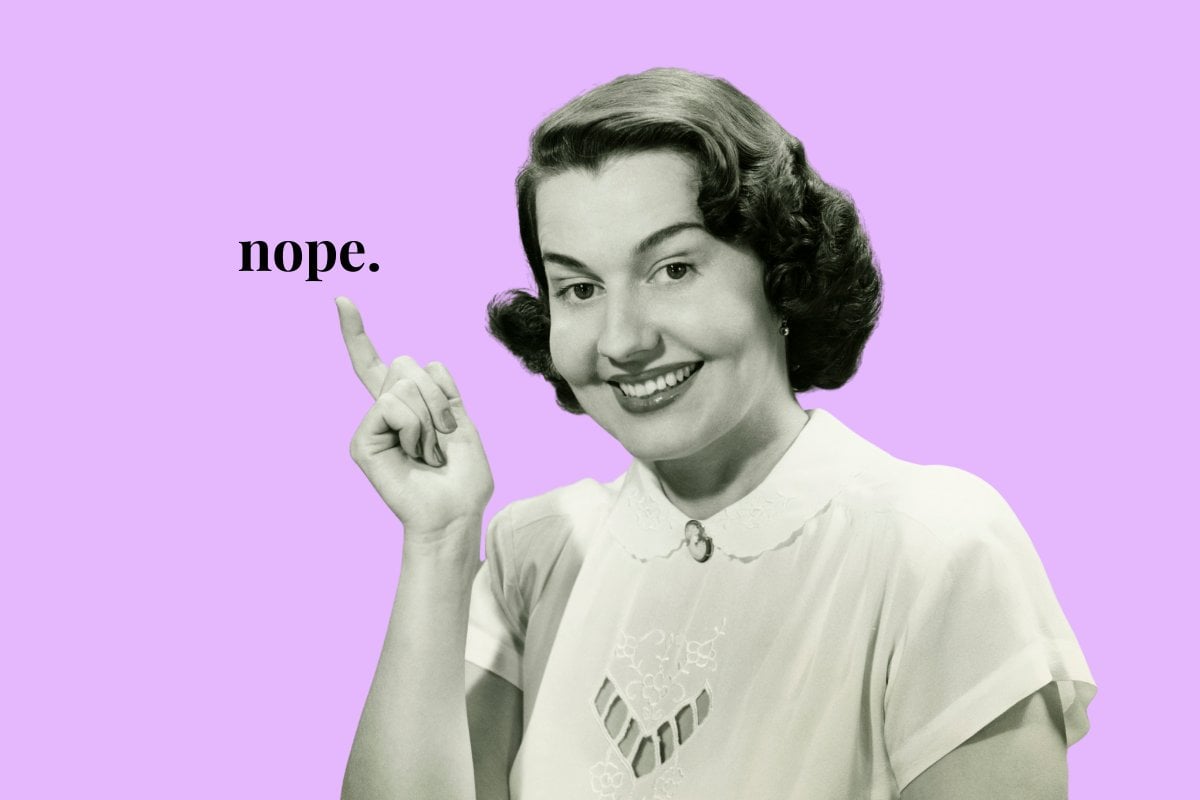 Because we're all about positive reinforcement in the bedroom, we can get very loud about what we DO want during sex. "Do touch me there, do go faster, then go slower, then definitely go faster again." etc. etc.

...But is all of that proactive chatter distracting us from being super clear about what we definitely DON'T want in the bedroom?

Have a peep at the juiciest findings from the Mamamia sex survey. Post continues after video.

To get some insights into what exactly are on women's never-ever-ever-no-thank-you-ma'am sexual anti-bucket lists, we decided to ask them straight up. In fact, we asked 1000 of them in the Mamamia Sex Survey, just to be sure.

So, read on. Learn a little. And be respectful of women saying no in bed. Always.

What women really don't want to do in bed.

...or the kitchen, or in the shower, or wherever really!

"Something the other person isn't comfortable with and vice versa - I'm pretty open to trying new stuff but both have to be ok with it."

"Go down on another female."

"I hate the idea of sex that degrades anyone. Humiliation and hurting is out for me, not sexy."

"Be tied up. I hate it - I just find it completely unsexy."

"Hurt my partner. Even if he begged for it."

"Anything to do with scat."

"I honestly don't know. I sometimes think I'm too vanilla. But is that just what it feels like after 17 years of marriage?"

"Pee on someone or let someone pee on me."

"Open to most things and everyone has kinks, but I am not into feet being involved at all."

"Nothing involving degradation or shame."

"I'm very open-minded and have/would be willing to try most things. But specific fetishes like pooing on people (yes it's a thing!) is a big no for me."

Listen to this episode of The Quicky, where host Claire Murphy analyses the Mamamia sex survey. Post continues after podcast.

"I am in a long-term relationship, I would consider anything with my partner."

"No yellow or brown play please and thank you."

"I will NEVER let a man ejaculate on my face. It feels so degrading to me."

"Answer my phone or the door."

"Have sex with them before they've had an STI test."

"I'm not into tasting my own bodily fluids. My husband has always a fetish for me to give him a blow-job after he's been inside me and for me to essentially lick my own juices but I just can't. It is not appealing."

"Have another girl join. I couldn't deal with sharing."

"Ask for the lights to be turned off."

"Use gags or restraints."

"Put up with something painful or uncomfortable."

"A partner once asked me to ride him with a strap on. I think it's the only thing I've declined."

"I'm very shy with the lights on so I'm less likely to do crazier things with them on."

"Don't kiss me once you've eaten my vagina. Yes it was good, yes I appreciate it but I don't want to taste it."

"Let anyone film it on a device I don't own and control."

"I don't like 69, it's too weird a position to be in with your heads in each other's bums."

"Anything to do with poo."

"Invite another person to join."

"Have sex in front of other people."

"I'm not sure I'd like to watch myself/record myself having sex."

"Role play which imitates under age sex e.g. dressing up in a school uniform costume."

"Anything that my partner didn't want."

"Go anywhere near the anus."

"I'm pretty open but I've been asked to defecate on a man and I refused."

"I love giving my boyfriend head, I still feel weird about swallowing and jump on top when I feel like he's not far off that point."

"Food in the bedroom."

"Let my partner come on my face. I let this happen for a while in a relationship then it just started feeling totally demeaning. It's off the menu now!"

"Put food in my vagina - they are not sex toy substitutes."