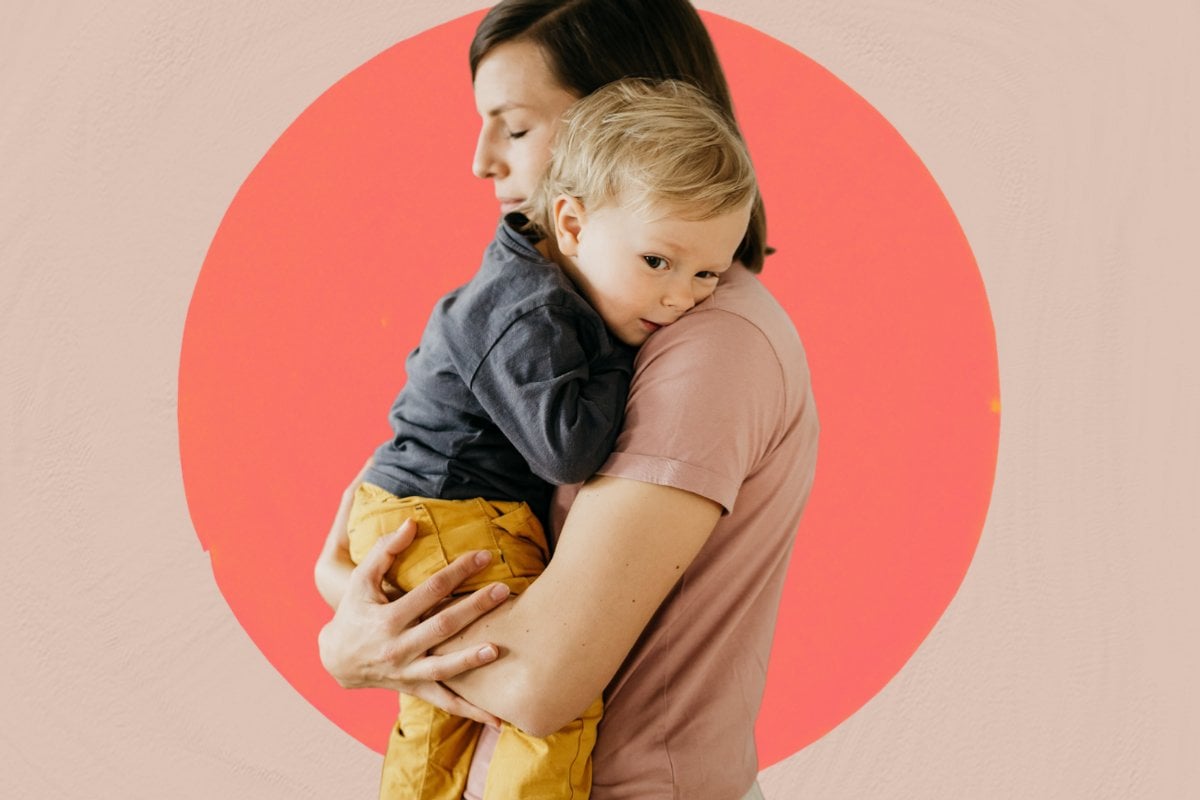 I learnt to lie pretty damn quickly after my first baby was born.

I hid so many eye rolls as grandmother after grandmother patronised me, telling me how quickly time would pass, and how I would grow to miss the red raw nipples of breastfeeding, the torturously long, sleepless nights and the putrid, pungent smell that assaults the nostrils when changing many, many nappies.

Watch: Explaining nipples to my baby. Post continues below.

I silenced so many outbursts as more grandmothers exclaimed how wonderful my husband was for….changing a nappy. I mean, honestly, is that all it takes for a man to be a good parent? The odd nappy? Noted.

The lying enabled me to maintain my halo.

It was important to me to remain shiny and perfect. All mothers are angels and I had to be one of them.

The more I lied about how happy I was to be a mother, and how awesome my husband was as a father, the quicker the halo slid down towards my neck and began to tighten.

I was miserable. Having a baby was awful.

Mother's group meetings made me feel like a hellish monstrosity. Women, dozens of them, dressed well, who matched their hair ties to their socks spewing toxic positivity disguised as one-liners and hashtags (#mumlife #newborn #bliss) all began to highlight just how much of a failure I was.

Being in charge of a house and four children sharpened my control freak tendencies. Everything was micromanaged to Mary Poppins perfection.

Except when it wasn’t, and the house looked like a set from an apocalyptic movie scene where no one is sure what they are eating, the latrine is overflowing, and someone is bleeding out.

My husband could do nothing right. He had an income to earn and a career ladder to climb. He annoyed me immensely when he strolled into the house and asked, “What can I do to help?”.

“If I have to tell you I might as well do it myself!” I would scornfully reply in a voice so terrifyingly quiet even the mice got chills up their spines.

And then on occasion, while digging into the underbelly of the washing pile, he might ask, “Babe, where are my socks?” And I would shout-talk a snappy sarcastic response: “What am I, your mother?!”.

The early years of parenthood are brutal. Unless you are Pollyanna. And I am very much not her.

Leaking boobs and a wife that lives in her pyjamas for weeks are not sexy. Neither are conflict, obligation, and responsibility.

Communication between the two of us became minimal, comprising of grocery lists, doctors’ appointments and an ongoing competition as to who had slept the least and whose turn it was to make breakfast for the kids. We said 'I love you' out of habit, and made love for the same reasons. Neither one of us liked the other.

And then eventually, one day all four children were at school.

There were long stretches of time during the day when I was on my own. I could poo without an audience. And shower. Bliss. I looked into the mirror excited to brush my teeth and have time to apply skincare products and I didn’t recognise myself.

My husband was different too. We had lost ourselves, and each other, in the chaos of the early years.

The love was there, but what happened to the fun, attention, attraction? It had all evaporated while raising children.

It took a lot of years to like each other again. I felt I wasn’t being heard, so I’d have wife-sized tantrums and withhold sex or threaten divorce.

He felt unappreciated and unloved – so he left me. And it was only when we were apart, separated to be divorced, that we realised the like may have evaporated, but the love was still there.

We both had to make big, huge, hurtful hand grenade mistakes to find our way back into each other’s hearts. And I do wonder, if I had been brave enough to admit the struggle of motherhood, the strain that having children put on our marriage, if our relationship would have skipped the wounds of war?

Mostly, I wonder if I will be the type of grandmother to listen to a woman struggling with motherhood and instead of shoving gratitude up her throat, tell her, “I see you.”

Tarrin Lenard is a Zimbabwean immigrant who loves gin but drinks tea, teaches yoga and writes words. And not that it should matter but has also birthed four humans. And been married. Twice. You can follow her on Instagram here.

T
tam_bellymagic a year ago