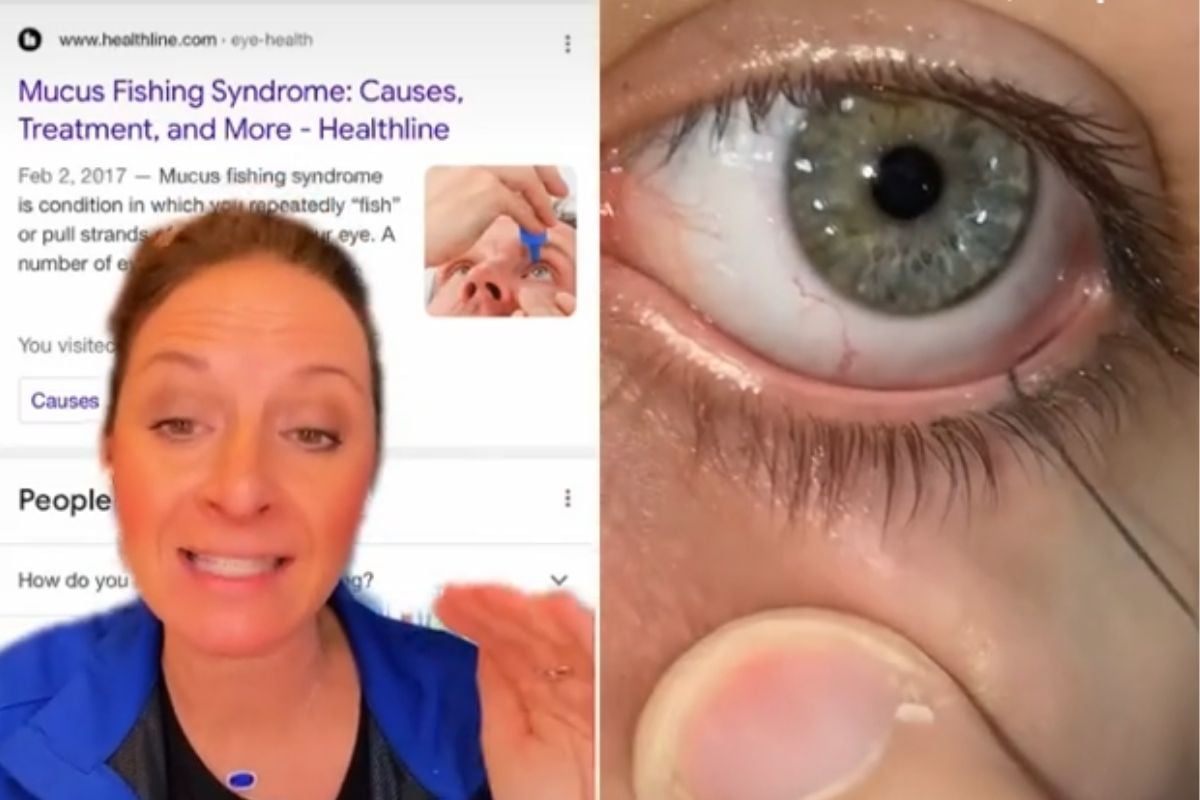 The Internet. She's a strange ol' place. Peppered with the weirdest, most cringey and often very bad ideas.

The new thing we absolutely didn't need in our lives? 'Mucus fishing'.

If you have no idea what this is (gold star for you), let me explain. Have you ever woken up and wiped gunk out of the corner of your eyes? Yes? Well, this... this is now a trend.

The hashtags #mucusremoval and #mucusfishing have racked up millions upon millions of views on TikTok - because it's 2022 and the people want to share clips of themselves removing strings of mucus from their eyes.

Watch: TikTok users are using eyelash glue to get the appearance of bigger lips. Post continues.

While it might give you slightly satisfying Dr Pimple Popper vibes, experts from all over the world are now posting their own versions of the clips on TikTok, explaining just how not good this trend is for your eyes.

What is mucus fishing?

Before we get into it, though - it's probably best to talk about exactly what 'mucus fishing' involves, yeah?

To give you a quick rundown, the practice generally involves people using either a cotton bud, tissue or just their fingers to drag mucus out of their eyeballs.

Please enjoy the below visual:

Is mucus fishing bad for you?

Plastic surgeon Anthony Youn, who debunks common medical myths on his TikTok page, warned followers that pulling out eye mucus will only make your eyes produce more mucus, as they try to compensate for the irritation.

That's because mucus in your eye is actually there for a reason. It protects the eye and acts as a coat to remove irritants and debris from the tear ducts.

So, it's not really something you should be trying to get rid of.

While a small amount of gunk in the morning is nothing unusual, making note of the colour and consistency will help you figure out the cause and if there's anything to worry about.

Generally speaking, though, your eyes might produce more mucus because they're dry or irritated, commonly due to increased screen time (hey, TikTok), eye makeup or lack of sleep. It could also mean you're struggling with allergies or an infection.

Either way, it doesn't mean you should start pulling strands of mucus out of your eye.

Y'see, contrary to what you might think, your eyes are actually pretty great at cleaning out themselves. So, the best thing you can do is not... touch them.

Yes, yes - if they're all crusty and gross, wiping them with a clean, wet cloth is fine. Just don't feel you need to get right in there with your fingers and have a poke around the place.

Not only will it mess with your eye health, but it can actually become a compulsive habit.

Not only does it ramp up the production of more mucus, but she also said it can eventually lead to a medical condition called 'mucus fishing syndrome'.

Like hair picking syndrome (also known as trichotillomania, if you wanna get fancy), mucus fishing syndrome is a condition triggered by body focused repetitive behaviour (BFRB), which is usually brought on by anxiety or emotional distress.

How to stop mucus fishing.

If you've started mucus fishing and can't stop, there are a few things you can do to help break the cycle.

Firstly, you have to figure out the underlying cause and why your eyes are producing more mucus than usual. For example, if your eyes are dry, reaching for drops may be an easy way to calm irritation.

The best way to work out what's causing your eyes to produce more mucus, is to make an appointment with your eye doctor - because it's important to get the correct diagnosis.

Once you figure this bit out, the next crucial step is to avoid touching your eyes.

If the compulsion to pick at your eyes is just too great and you think you might be dealing with BFRB, it could be worth seeing a GP or a therapist about what's best to do next.

Reply
Upvote
1 upvotes
I’m not an expert and even I could explain why this is a terrible idea!