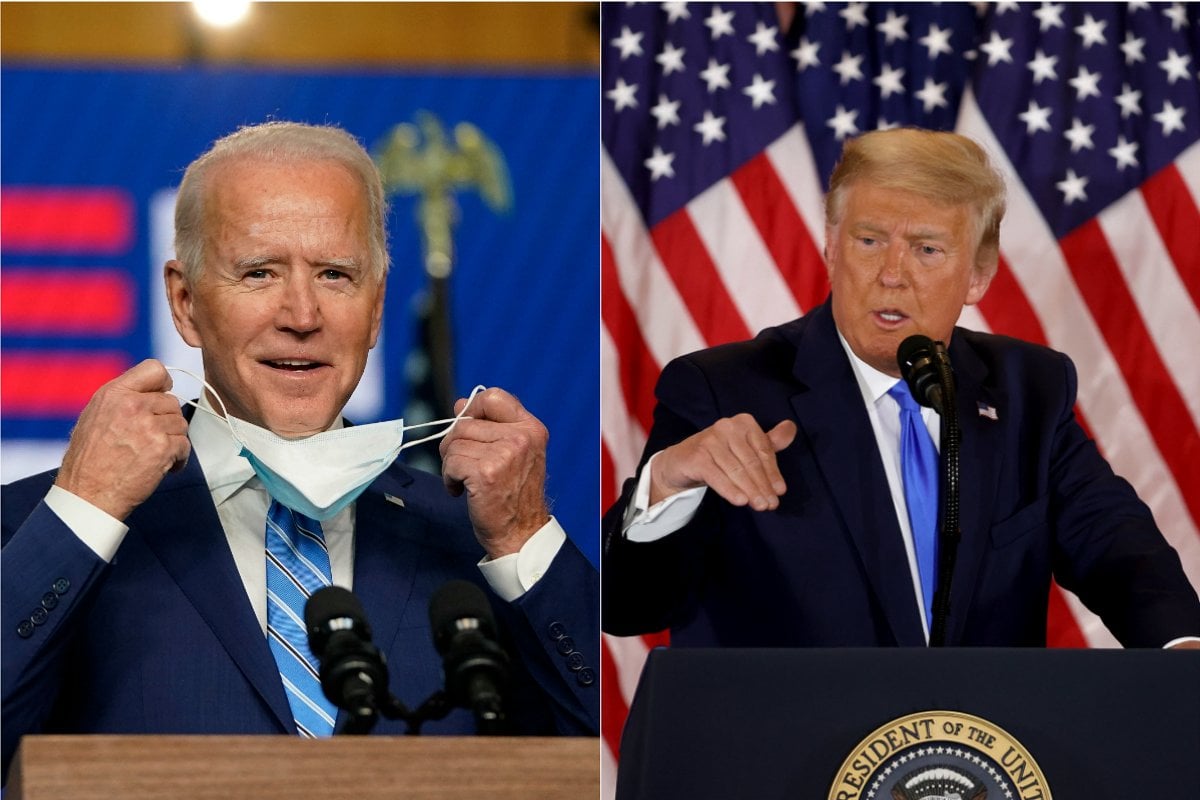 Democratic nominee Joe Biden says he expects he will win the White House, whilst President Donald Trump continues to challenge the results.

In the past 12 hours, the presidential election has remained a nail-biter race with no winner yet declared.

At the time of publication, Joe Biden has secured 264 electoral college votes, whilst Donald Trump has 214. The magic number to win is 270.

There are still five key battleground states that remain too close to call: Pennsylvania, North Carolina, Georgia, Nevada and Arizona.

Sportsbet has paid out early for a Joe Biden win.

Australian bookmaker Sportsbet has paid out early, predicting Joe Biden will become the next President of the United States.

Despite the election not being called yet, Sportsbet paid a total of $23 million to punters who backed Joe Biden as the winner of the 2020 US Election.

In a statement, Sportsbet said: "After CNN projected the state of Michigan would go to the Democrats and holding the ascendancy in Nevada and Arizona, the online bookmaker has deemed the lead unassailable.

"With postal votes and potential legal proceedings to play out, it could be weeks before an announcement is officially made. But we've seen enough, so why make the punters wait?"

WE'RE CALLING IT! We're paying out early on JOE BIDEN to win the US Election! #USElection2020 pic.twitter.com/EBcvLdsmyk

It is worth noting, however, that Sportsbet also paid out early in the 2019 Australian Federal election. Two days before the election, they paid $1 million to punters who backed Labor to win and it was ultimately the wrong result.

Biden has won Michigan - but not according to Trump.

With 99 per cent of the vote counted, Biden held a lead of just over 60,000 votes, according to the Detroit Free Press.

However Trump, who narrowly won Michigan in 2016, has disputed this result in a tweet that has since been censored by the social media network.

"We hereby claim the State of Michigan if, in fact,..........there was a large number of secretly dumped ballots as has been widely reported!" Trump tweeted.

We have claimed, for Electoral Vote purposes, the Commonwealth of Pennsylvania (which won’t allow legal observers) the State of Georgia, and the State of North Carolina, each one of which has a BIG Trump lead. Additionally, we hereby claim the State of Michigan if, in fact,.....

It is unclear where the "dumped ballots" have been "widely reported".

Biden has won Wisconsin - but Trump demands a recount.

Trump, who won Wisconsin in 2016 by a small margin, has requested a recount.

"There have been reports of irregularities in several Wisconsin counties which raise serious doubts about the validity of the results," Stepien said in a statement.

"The President is well within the threshold to request a recount and we will immediately do so."

Historically, statewide recounts in Wisconsin have changed the vote tally by only a few hundred votes. Biden currently leads by more than 20,000 votes out of the 3.3 million ballots counted in Wisconsin.

Donald Trump wants to halt counting of votes in Pennsylvania.

Pennsylvania is another key battleground state, which is currently too close to call between Trump and Democratic challenger Joe Biden. However, this hasn't stopped Trump from claiming Pennsylvania as a victory for him.

President Donald Trump's campaign has said it is suing to temporarily halt vote counting in Pennsylvania and has also asked to intervene in a US Supreme Court case over mail-in ballots in the state, which could determine the winner of the election.

The campaign said on Wednesday it was suing to stop Democratic officials in the state from "hiding" the ballot counting process from Republican poll observers.

There are still hundreds of thousands of votes still to be counted in Pennsylvania, the majority of which is mail-in and absentee votes.

Prominent Republicans have condemned the President for falsely claiming victory in states he has not won, and for ultimately saying he "did win this election," when millions of votes were yet to be counted.

“I was very distressed by what I heard the president say,” former Sen. Rick Santorum of Pennsylvania said on Wednesday.

Chris Christie, the former New Jersey governor, told ABC News that there was “just no basis to make that argument tonight.”

He continued: “All these votes have to be counted that are in now. In Pennsylvania, the counting won’t even start until tomorrow or Thursday or Friday because the Pennsylvania Supreme Court extended for three days when you can accept ballots. I understand that there could be an argument on that based on Pennsylvania law, but that argument is for later. Tonight was not the time to make this argument.”

Right-wing commentator Ben Shapiro also tweeted: "No, Trump has not already won the election, and it is deeply irresponsible for him to say he has."