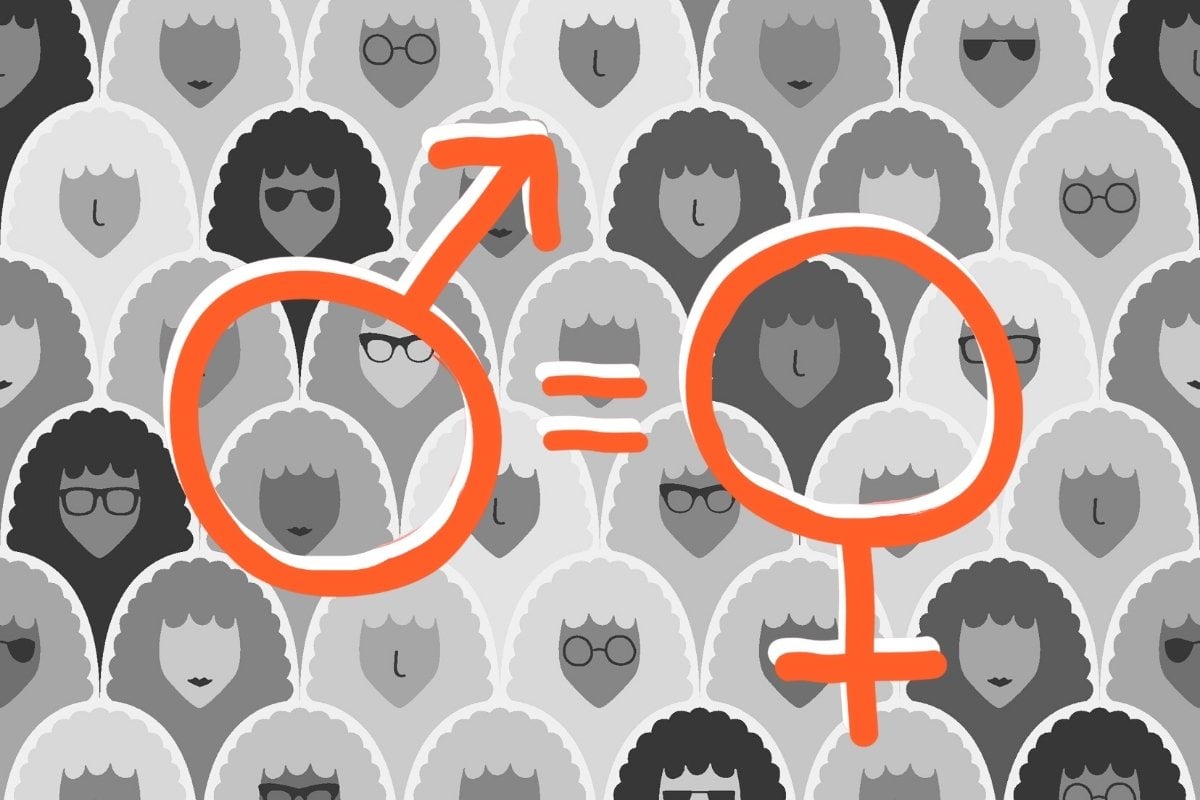 Ever found yourself tangled up in a disagreement over a hot-button issue, struggling to get your point across? Mamamia’s How To Have A Conversation series takes topical subjects and guides you through how to engage, simply and effectively, so that you can have a more productive conversation. And who knows, maybe even open some eyes...

In recent years, we've witnessed significant gains for women. The global groundswell of support for movements like Time's Up and MeToo. The loud calls for better representation for the spectrum of women in entertainment, boardrooms and politics. The millions marching in the streets calling for reforms to help end inequality.

Yet there's still a significant swathe of people who are reluctant to identify with the 'F' word.

Watch: Unsure if you're a feminist?

For some, the concept conjures decades-old associations of a bra-burning, rage-filled protest movement; a kind of shouty, public activism they simply aren't willing to align with.

For others, it implies a rejection of femininity. Or worse, a hatred of men.

And for many young people, who enjoy the rights hard-won by previous generations of feminists, the cause simply no longer feels urgent or even relevant.

But looking beneath the stereotypes and misconceptions, feminism is simply a principle, a fundamental belief in something that benefits us all.

Let's take a look at what it really means by engaging with some of the most common myths, misunderstandings and arguments against adopting the word.

'I believe in gender equality. I don't need to label myself as a feminist.'

That's exactly what feminism is: a belief in political, economic and social equality of the genders.

It's not contingent on how that belief is exercised; you don't have to meet specific criteria to 'qualify' as a feminist, nor do you have to be a certain type of person.

It simply means you're in favour of gender equality.

'Feminism is not about equality. It prioritises women at the expense of men.'

Feminism is not about taking over. And it's not about 'men versus women'. It's about giving minority genders an equal chance and choice to participate in a society that hasn't necessarily been designed for them.

This doesn't happen at the expense of men. Quite the opposite.

Listen: Caitlin Moran, one of the funniest writers on the planet, reflects on MeToo, feminism, fame and getting older.

Research has, in fact, established a direct link between gender equality and men's wellbeing.

In more gender-equal countries in Europe, for example, men are less likely to get divorced, to be depressed and to die as a result of suicide or violence.

'Feminism is just not relevant these days. Women in Australia have equal rights.'

But gender equality isn't just about equal legal rights; it's about opportunities as well. And there are still significant barriers to that.

For example, persistent expectations about a woman's role within a family mean that, in Australia, 70 per cent of primary unpaid carers of children are women. They spend almost triple the amount of time that men do taking care of children each day.

Read more: The C-Suite: Where working women get stuck on the way to the top.

For women of colour and trans women, the barriers are even higher.

First Nations women, for example, have lower rates of workforce participation compared to other Australian women and First Nations men. And for other culturally and linguistically diverse women, the rates are lower still.

Yes, we can acknowledge and be grateful for how far we've come. But there is still a long way to go.

'But men face serious issues, too. Higher rates of suicide, for example.'

Of course. Acknowledging women's challenges doesn't have to mean ignoring those faced by other genders. Equality means no one is left behind.

As we touched on earlier, many of the structures that have disadvantaged women have also been detrimental to men.

At the foundation of those structures? Patriarchal expectations about masculinity. The kind that stigmatises vulnerability and help-seeking and means men are less likely to seek medical care. The kind that drives intimate partner violence. The kind that underpins many of the key risk factors in men's suicide. (In fact, an American study in 2015 found that among men, "traditional masculinity was associated with suicidal ideation, second only in strength to depression.")

Dismantling these structures will save lives and benefit us all. That's feminism.