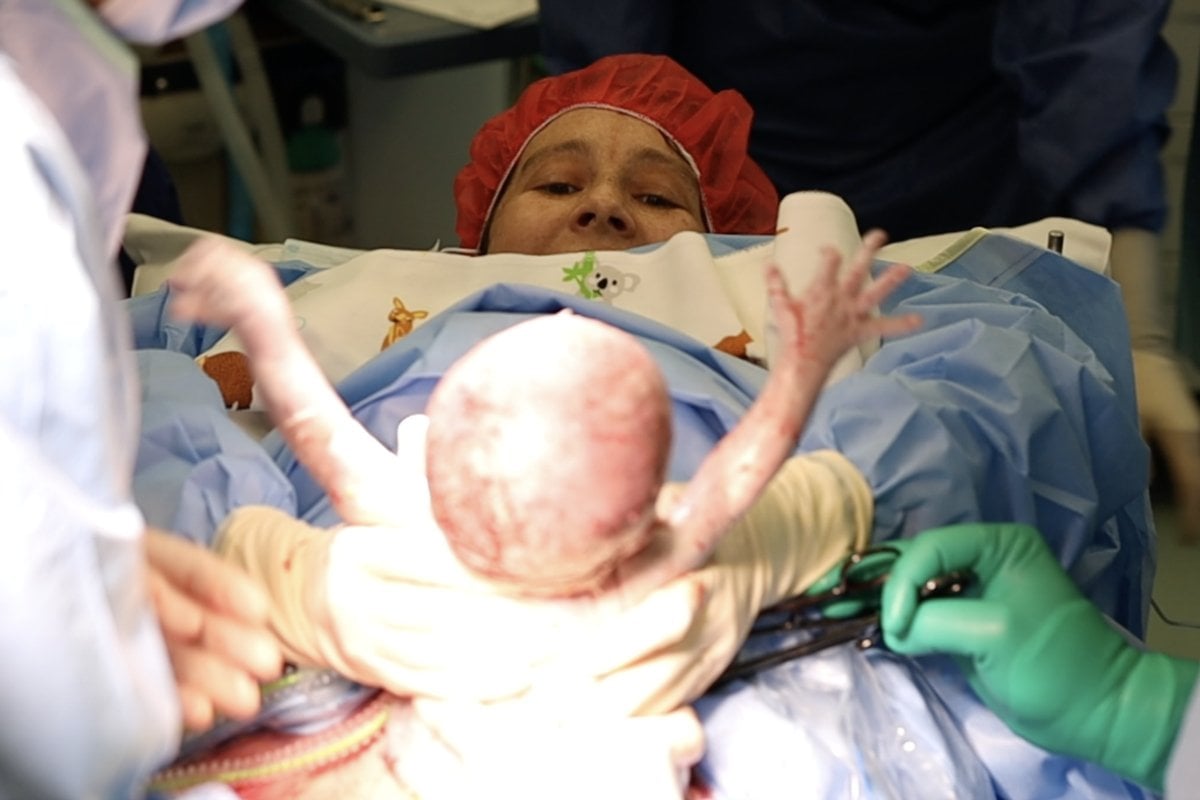 Connor Kennedy, a first-time mum in Melbourne, changed her birth plan mere days before her due date. Her obstetrician Dr Peter Jurcevic suggested a maternal assisted caesarean to deliver her own twins.

For Victoria, the delivery of twins via a maternally assisted caesarean would be a first. It was a prospect Connor admits she was slightly nervous about, but nevertheless excited.

“The big difference between this and a regular caesarean is that as parents, you're more involved and you get to see their first breath, rather than being stuck behind a screen,” Connor shares with Mamamia.

Connor and her husband, Damian, say the biggest challenge of the birth was the mental preparation for the unknown. But when it came to the day, adrenalin took over.

At 8:10am on September 1, Connor and her husband Damian entered the theatre at Frances Perry House in Melbourne for the birth of their twin boys.

“Everything is pretty much the same as a normal c-section,” she explains, “except that your hands are free and there's no barrier between you and the baby, which is really important so you can actually witness them come out and grab them and pull them up.”

Of the moment she pulled out her sons, Connor says “it was just complete euphoria”.

Connor’s biggest concern was that she would faint from the sight of blood and be a distraction for the doctors. When it came to it, though, she says this simply wasn’t an issue.

In fact, she describes it as a stress-free birth.

Connor explains that being able to see the faces of the medical staff throughout the surgery put her at ease - an "unexpected" benefit of the maternal assisted caesarean.

“So instead of feeling anxious, I felt happy… I didn't have any worry throughout the procedure.”

Oh, and it was a pain-free birth too.

“You can feel some sensations with the incision site, but absolutely no pain.”

Connor and Damian say that if they have any more kids, and need to do a cesarean, they will “100 per cent” ask to do another maternal assisted cesarean.

“We've been telling all of our friends, if you're having a c-section - for whatever reason - talk to your obstetrician about this. We cannot emphasise enough how brilliant it is.” 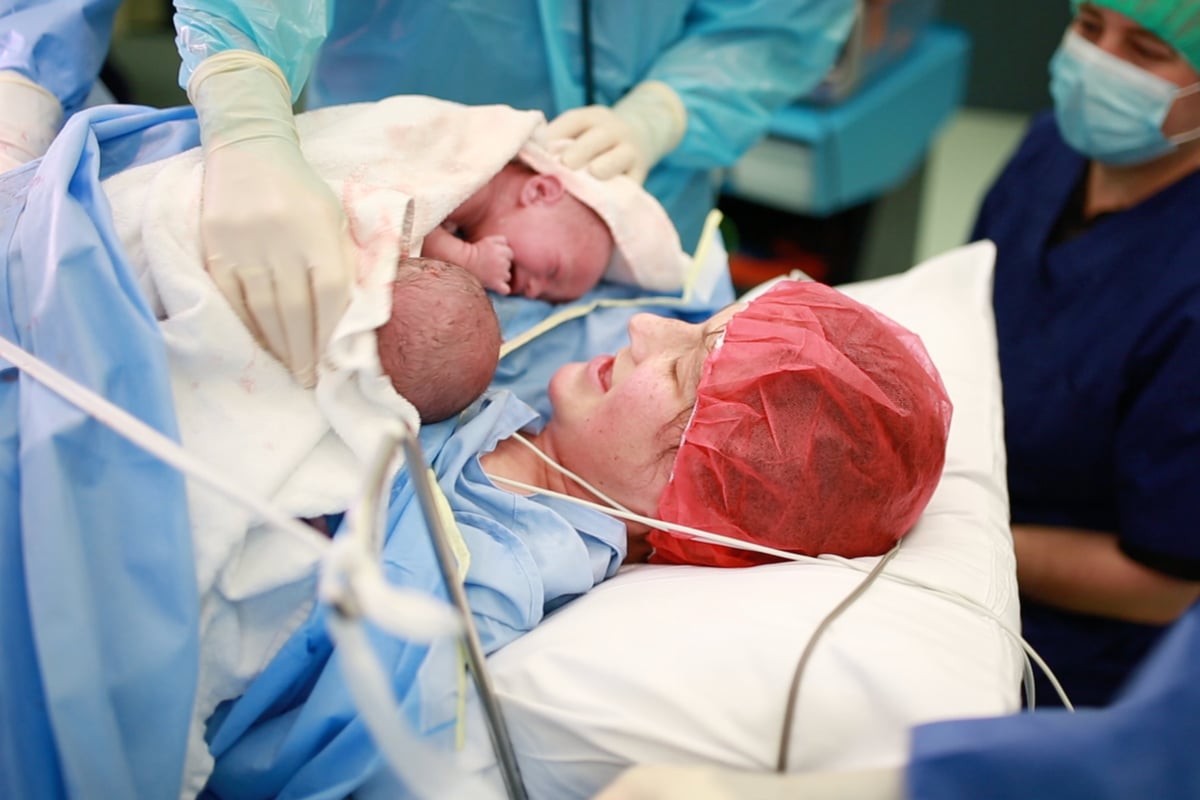 Connor after the birth of her twin boys. Image: supplied.

They’re not alone in their overwhelmingly positive experience.

Less than one hour later, down the corridor from Connor and performed by the same obstetrician, Victorian mum Caitlin Walker also had a maternal assisted cesarean.

It had been her birth plan from 12 weeks - a decision made after having gone through a cesarean before. As a midwife herself, Caitlin remembers feeling quite detached during the birth of her first child.

Caitlin adds she was attracted to the idea of "knowing the babies would be straight up onto [her] chest and [they] would have that immediate bonding experience."

Caitlin echoes Connor's sentiments in the comfortability of being able to see the reassuring faces of the medical staff.

"It was really quite intimate," she reflects. 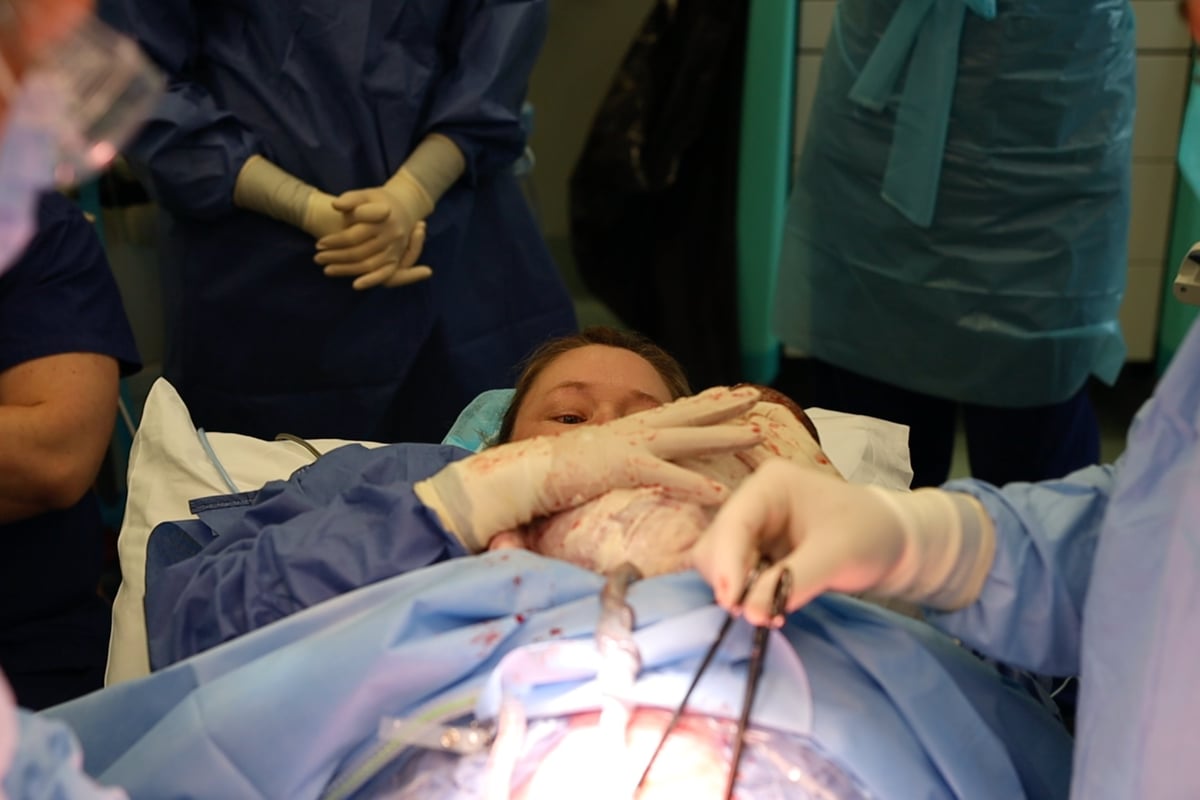 Caitlin during the birth of her twins. Image: Supplied.

The birth of Caitlin's twins was an extraordinary ending to a difficult pregnancy. She had been told that one of her twins had growth issues, likely due to chromosomal abnormalities.

"So for me, having her, straight up and onto my chest was really quite emotional, just to be able to see her straight away.

"When you've been told that there might be a problem with your baby, you just want to know that she's okay."

Caitlin could instantly see her baby was perfectly healthy, and wasn't suffering from the suspected issues.

Although Caitlin doesn't plan to have any more children, she says that if she were to, she "would do it again".

"I feel very privileged that I was able to do that because not many women have that opportunity."