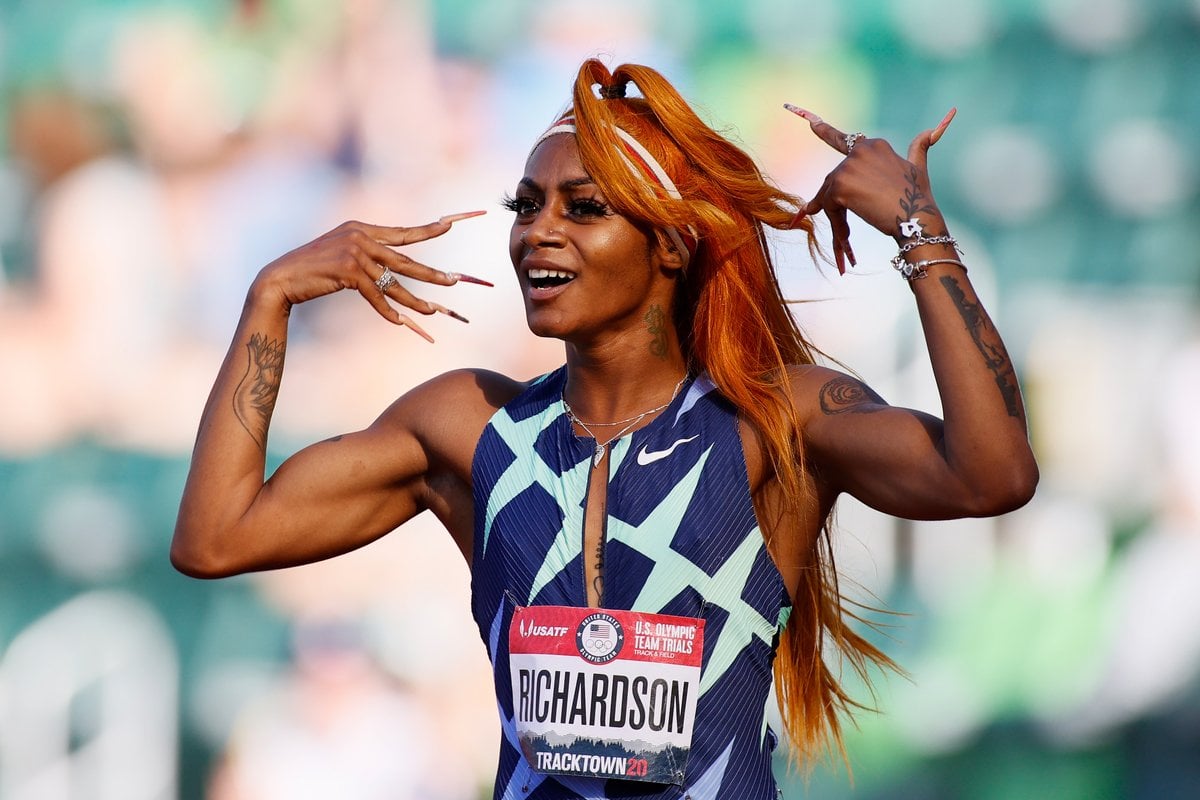 Sha'Carri Richardson is a star athlete in the making.

Just last month, the 21-year-old won the women's 100-metre final at the US track-and-field Olympic trials in Oregon, securing herself a spot on the American team for the upcoming Tokyo Olympic Games.

Running with flaming orange hair, thick eyelash extensions and long, colourful nails, Richardson ran the event in 10.86 seconds. After the race, she jogged up into the crowd to hug her grandmother.

She instantly became a gold-medal hopeful and a social media sensation.

"I just want the world to know that I’m that girl," she said in a viral interview after her semi-final. 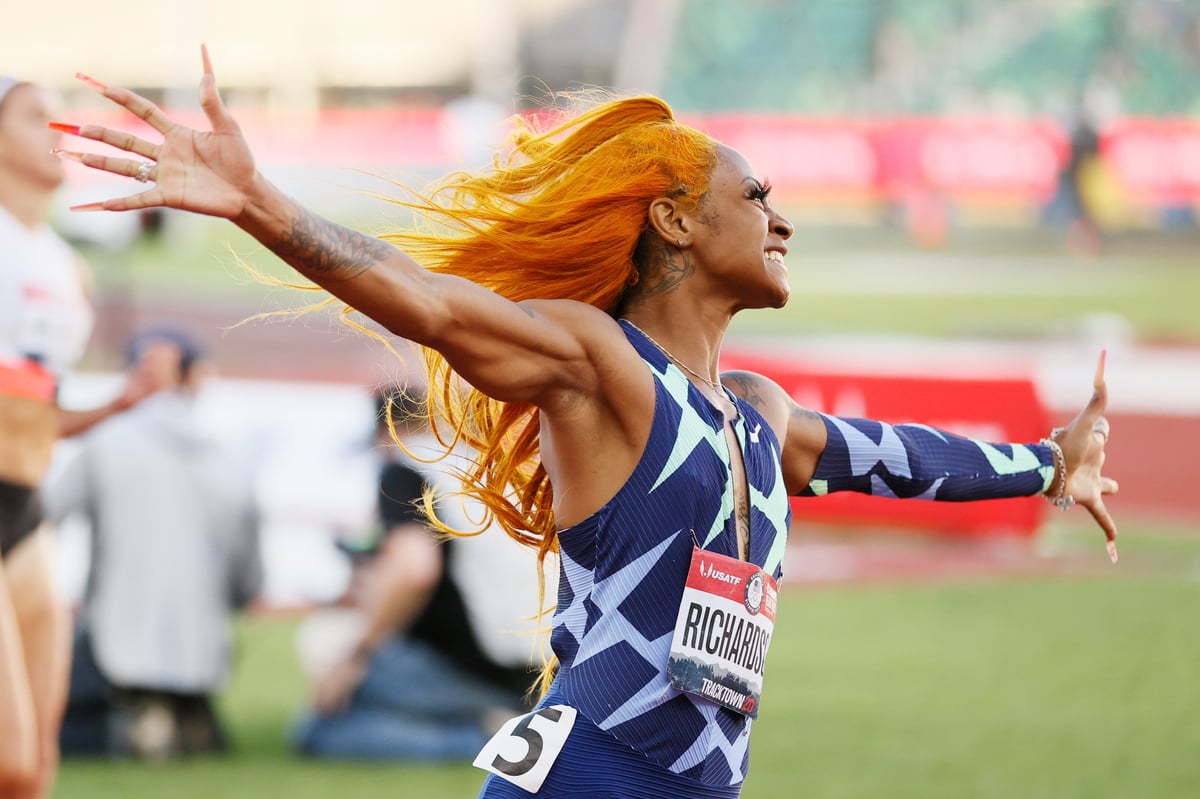 During an interview a few days before the trials, a reporter informed Richardson that her biological mother had died. It came as a complete shock.

"To hear that information coming from a complete stranger, it was definitely triggering," Richardson told the Today show. "It was definitely nerve-shocking. It was just like, who are you to tell me that? No offence against him at all. He was just doing his job. But definitely that sent me into a state of mind, a state of emotional panic.

"I still have to go out and put out a performance for my dream, go out there and still compete. From there, just blinded by emotions, just blinded by hurting, I knew I couldn’t hide myself. In some type of way, I was just trying to hide my pain."

Speaking to Today, Richardson said the news and the pressure to make the Olympic team led her to smoke marijuana, in the state of Oregon, where the drug is legal.

It is however banned under competition rules and on Friday morning (US time), the United States Anti-Doping Agency (USADA) announced the positive test result and said Richardson has accepted a suspension of one month, starting on June 28.

While this could still allow her to compete in the 4x100 meter relay at the Tokyo Games, Richardson will miss out on the 100-metre race.

"The rules are clear, but this is heartbreaking on many levels," USADA CEO Travis T. Tygart said in a statement.

"Hopefully, her acceptance of responsibility and apology will be an important example to us all that we can successfully overcome our regrettable decisions, despite the costly consequences of this one to her."

During her interview with Today, Richardson acknowledged her mistake.

"Like I tweeted yesterday, I'm human," she said. "We are human, I want to be as transparent as possible with you guys whether it's good, whether it's bad.

Since the announcement of her suspension, countless supporters have criticised the penalty.

The criminalization and banning of cannabis is an instrument of racist and colonial policy.

The IOC should reconsider its suspension of Ms. Richardson and any athletes penalized for cannabis use. This ruling along w/ IOC denial of swim caps for natural hair is deeply troubling. https://t.co/Ao1Yu8Ax9G

The notion that weed is a problematic “drug” is rooted in racism. It’s insane that Team USA would disqualify one of this country’s most talented athletes over thinking that’s rooted in hatred. It’s something they should be ashamed of. Also if weed made you fast, I’d be FloJo. https://t.co/swDLNoVcV3

To punish this incredible athlete for cannabis?? This prohibition has fucked up so many peoples lives I just can’t even. We love you @itskerrii https://t.co/mzxrySbAyM

While marijuana is legal in various states across the United States, including in Oregon where Richardson smoked it, the substance remains prohibited "in competition" by the World Anti-Doping Agency (WADA), the International Olympic Committee-affiliated body that regulates drug use in global sport.

WADA has said that marijuana "can be performance-enhancing", pose risks and violates "the spirit of the sport".

Richardson had hoped to become the first female American to win the race in the Olympics since 1996. However, it looks unlikely she will be able to make that dream a reality this year.

"Everything I do comes from me naturally; no steroids, no anything. This incident was about marijuana. After my sanction is up, I'll be back and every single time I step on that track I'll be ready for the Anti-Doping Agency to come and get whatever they need.

"Because this will never happen [again]."

Reply
Upvote
2 upvotes
Is cannabis performance enhancing? It always made me sleepy 😂

Reply
Upvote
1 upvotes
@beachhouse84 Not the point. The rule is the rule is the rule. Until the rule is changed, athletes are obliged to follow said rule.
As an aside, cannabis may potentially be performance enhancing if it alleviates stress. Furthermore, athletes are also governed by sociopolitical issues, in that allowing elite athletes to take drugs that are not legal in many countries/states may be seen as condoning legislation to legalise said drugs for the general population (ie "if the most healthy, highest performing athletes in the world can smoke dope, why shouldn't we?").

Reply
Upvote
@mamamia-user-482898552 its totally the point. Why should they be able to create and enforce rules that don't have any basis?

"allowing elite athletes to take drugs that are not legal in many countries/states may be seen as condoning legislation to legalise said drugs"
No, it would just be seen as sticking to whats relevant.

Reply
Upvote
4 upvotes
How is it a racist law?

Reply
Upvote
@katp  Crack will get you a life sentence in most states, while the exact same amount of cocaine will be ruled a misdemeanour. The difference between them? One is more prevalent in black communities, the other is used by affluent white people (lawyers). Similarly, marijuana is used more in the black community so prohibiting it is a way of excluding them from competitive sports. Vs alcohol, for example, which is not prohibited though its a lot worse for you, and is mainly used by white people.