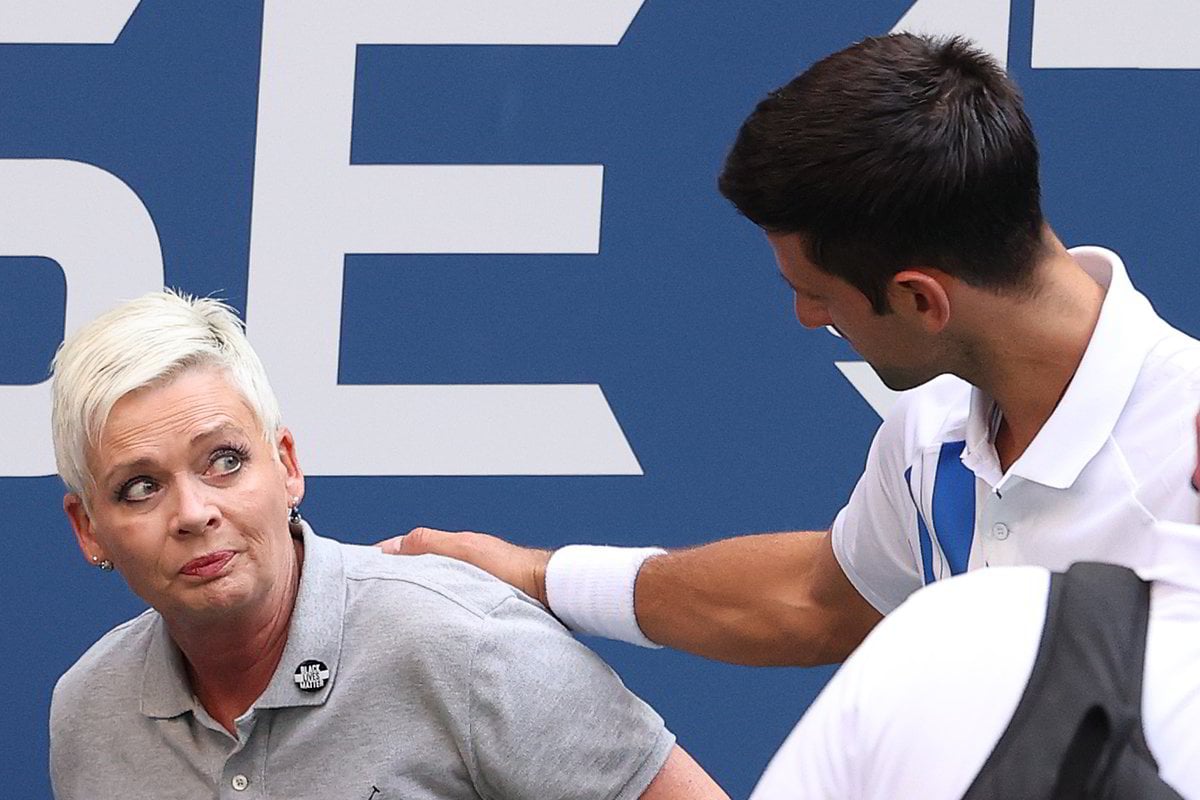 Novak Djokovic has played professional tennis for 17 years, with 17 grand slam wins to his name. He knows the rules and regulations of the sport well.

Yet, he’s managed to become the first world number one to be disqualified from a Grand Slam singles tournament.

During his US Open match against Pablo Carreno Busta, the Serbian was falling behind 6-5 in the first set.

Upon losing the last point of the game, he grabbed the tennis ball in his pocket and smacked it behind him. He didn’t look where it was going, and the yellow ball hit an unsuspecting line judge directly in her throat. The woman exclaimed as she dropped to the ground and grasped at her neck.

Djokovic saw the lineswoman fall and hurried to her side as help arrived. She removed her mask and looked to be in pain, before she was eventually able to walk off the court. 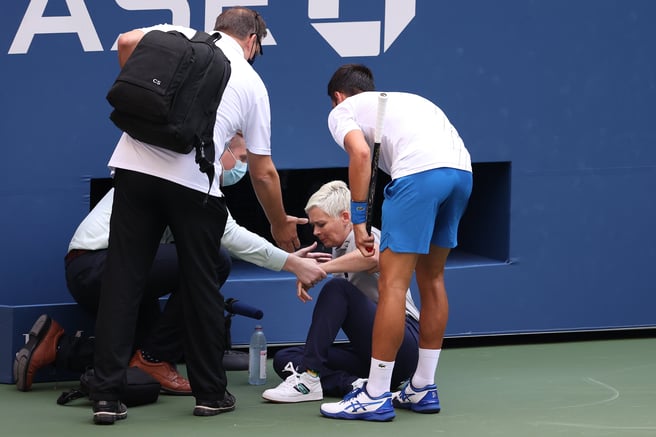 Novak Djokovic of Serbia tends to a line judge who was hit with the ball during his Men's Singles fourth round match against Pablo Carreno Busta of Spain on Day Seven of the 2020 US Open. Image: Getty.

The 33-year-old tried to defend himself.

“She doesn’t have to go to the hospital for this,” he was heard saying.

“You’re going to choose a default in this situation? My career, grand slam, centre stage?

“If she would have gotten up right away...”

Essentially, if she had reacted differently, he would be able to continue in the competition. Whilst Djokovic clearly did not intend for the ball to hit the lineswoman, he smacked it in a moment of frustration with no consideration for where it would land and then proceeded to shift the blame onto the woman it hit.

After about 10 minutes, officials decided Djokovic must default - the equivalent of an ejection.

Watch: The moment that saw Novak Djokovic disqualified from the US Open 2020. Post continues below.

It was a clear violation of the rules which, as outlined by the US Tennis Association, state that "intentionally hitting a ball dangerously or recklessly within the court or hitting a ball with negligent disregard of the consequences" is prohibited.

After immediately acting defensively and trying to argue with the straightforward rulebook, he didn’t show up for the compulsory post-match press conference. Instead, he left the stadium with no apology. Consequently, the USTA says Djokovic will forfeit the ranking points and the $US250,000 in prize money he earned in the tournament.

Since the incident occurred, the lineswoman who was struck has faced death threats online.

Although the US Open didn't name the lineswoman involved, a Serbian tabloid shared her Instagram handle with the world.

On her Instagram page, which has since been deleted, she was bombarded with comments calling her an "alcoholic" and accusing her of "faking the injury all along" on almost every single post on her account.

"I hope you rot in hell for this," one user wrote.

"No matter, you can be assured that one day karma will come for you. You were the reason the US Open disqualified the best tennis player. Novak, I hope you realise she was faking the injury all along," another claimed.

Others mocked the death of her 25-year-old son, which occurred in 2008.

"Don't worry, you'll join him soon," one user wrote, commenting on a photo aimed at her late son ﻿

Posting to Twitter on Tuesday, Djokovic responded to the vitriol the lineswoman has faced online.

Dear #NoleFam thank you for your positive messages.. Please also remember the linesperson that was hit by the ball last night needs our community’s support too. She’s done nothing wrong at all. I ask you to stay especially supportive and caring to her during this time. (1/2)

"Dear #NoleFam thank you for your positive messages... Please also remember the linesperson that was hit by the ball last night needs our community’s support too. She’s done nothing wrong at all." Djokovic wrote.

"I ask you to stay especially supportive and caring to her during this time.

"From these moments, we grow stronger and we rise above. Sharing love with everyone. Europe here I come."

Among tennis professionals, there is little dispute that Djokovic’s disqualification from the US Open was the right decision.

“He would know the rules,” former British tennis player Greg Rusedski said. “At 33 years of age you know what the situation is and what’s going to happen.”

“Yes, it’s a very difficult situation being defaulted at a major championship but he should have just taken an hour, two hours in his suite, reflected on what happened, gone into press, taken responsibility, and apologised for the situation,” Rusedski continued.

Billie Jean King also said it was the right call.

Here are my thoughts on the Novak Djokovic default.

First I hope the line judge is okay.

The rule is the rule. It is unfortunate for everyone involved, but in this specific situation the default was the right call. #USOpen

After his leaving the stadium, he released a statement to Instagram, which read in part: “As for the disqualification, I need to go back within and work on my disappointment and turn this all into a lesson for my growth and evolution as a player and human being. I apologise to the [US Open] tournament and everyone associated for my behaviour.”

"I checked on the linesperson and the tournament told me that thank God she is feeling okay. I'm extremely sorry to have caused her such stress. So unintended. So wrong," he said, adding that he was not sharing Clark's name "to respect her privacy". ﻿

This whole situation has left me really sad and empty. I checked on the lines person and the tournament told me that thank God she is feeling ok. I‘m extremely sorry to have caused her such stress. So unintended. So wrong. I’m not disclosing her name to respect her privacy. As for the disqualification, I need to go back within and work on my disappointment and turn this all into a lesson for my growth and evolution as a player and human being. I apologize to the @usopen tournament and everyone associated for my behavior. I’m very grateful to my team and family for being my rock support, and my fans for always being there with me. Thank you and I’m so sorry. Cela ova situacija me čini zaista tužnim i praznim. Proverio sam kako se oseća linijski sudija, i prema informacijama koje sam dobio, oseća se dobro, hvala Bogu. Njeno ime ne mogu da otkrijem zbog očuvanja njene privatnosti. Jako mi je žao što sam joj naneo takav stres. Nije bilo namerno. Bilo je pogrešno. Želim da ovo neprijatno iskustvo, diskvalifikaciju sa turnira, pretvorim u važnu životnu lekciju, kako bih nastavio da rastem i razvijam se kao čovek, ali i teniser. Izvinjavam se organizatorima US Opena. Veoma sam zahvalan svom timu i porodici što mi pružaju snažnu podršku, kao i mojim navijačima jer su uvek uz mene. Hvala vam i žao mi je. Bio je ovo težak dan za sve.

This last saga, though, is much bigger than just one moment of exasperation on Djokovic’s behalf. More so, it is emblematic of his apparent belief that the rules don’t apply to people like him. He’s the world number one, don’t you know?

In 2016 during the ATP Finals at the O2 Arena in London, Djokovic was specifically asked about his sometimes careless actions in moments of irritation.

The transcript of the exchange is as follows.

Journalist: “Back to the end of the first set, we saw you similarly venting your frustration at Roland Garros, throwing your racket. Does it concern you one day that will cost you dearly? If it hit someone...”

Djokovic: “You guys are unbelievable.”

Journalist: “Why is it unbelievable?”

Djokovic: “Because you’re always picking these kind of things.”

Journalist: “If you keep doing these things ...”

Djokovic: “I keep doing these things? Why don’t I get suspended then?”

Journalist: “You were close, weren’t you?”

Journalist: “If that ball had hit a spectator, it could have been serious.”

Djokovic: “It could have been, sure. Or it could have snowed in the O2 Arena, as well, but it didn’t.”

Journalist: “You’re not concerned about your mindset?”

Djokovic: “So, I’m the only player that shows his frustration on the court? That’s what you are saying?”

Journalist: “You’re one of the top-ranked players in the world.”

Journalist: “You are showing this frustration. I’m asking you, do you think it’s an issue for you?”

Djokovic: “It is not an issue for me. It’s not the first time that I did it.”

And it wasn’t the last time either.

Indeed, Djokovic had a pattern of reckless behavior on court that he'd never showed much concern about it before.#USOpen pic.twitter.com/JKgwFwrmUV

Clearly, he knew he was breaking the rules, and he had little concern for the potential consequences. And now it's come back to cost him a coveted grand slam title.

These regulations are just like the ones recently instituted about physical distancing in light of the coronavirus pandemic and the importance of… Oh, wait.

Djokovic didn’t care about those either.

In June this year, the Adria Tour kicked off in Belgrade, Serbia. It was a charity tennis tournament organised by Djokovic in the middle of the pandemic which blatantly ignored public health guidelines.

By the end of the first week, three-time grand slam semi-finalist Grigor Dimitrov tested positive for coronavirus after playing at the charity event. His positive diagnosis was followed by a slew of others. Initially, Djokovic declined testing in Croatia because he "didn't feel any symptoms" but his team later confirmed that he would be tested upon his return to Serbia. After being tested, it was confirmed that Djokovic too had contracted the illness.

His off-court pastimes throughout the tour also started to make headlines, with a minute-long video showing him dancing shirtless next to several players in a nightclub, with apparently no regard for the seriousness of the pandemic.

Nick Kyrgios was among the critics.

We ought to expect - nay, demand - better from the world number one.

Reply
Upvote
Geez, there really are some shit people out there. Blaming the woman who was literally an innocent bystander, mocking her son's death, over a bloody tennis match. Poor woman, I hope she's ok. And Djokovic is a tool (but we already knew that).