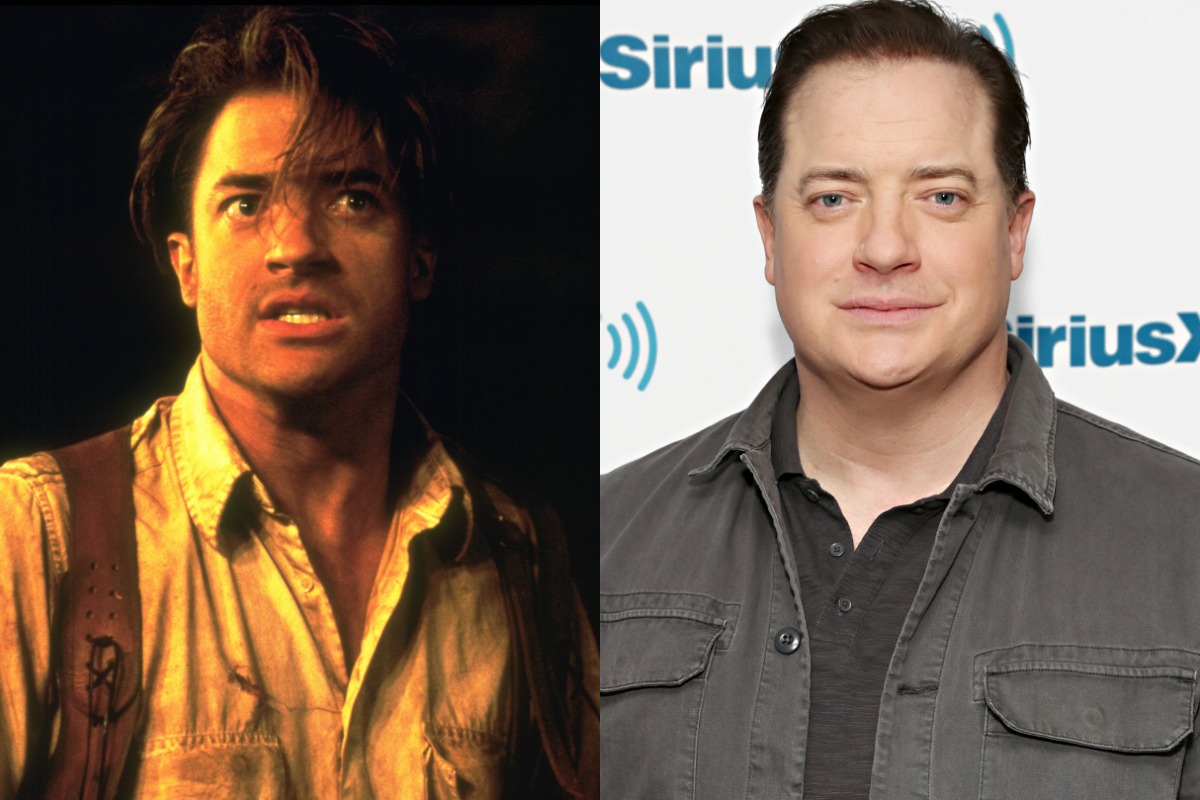 At the height of the late 1990s and the early 2000s, Brendan Fraser was one of the most recognisable faces in Hollywood.

The actor, who shot to fame with the 1997 comedy film George of the Jungle, was best known for his roles in The Mummy franchise, Crash, and Gods and Monsters.

But within just years of his career skyrocketing, the now 52-year-old appeared to largely fade away from the spotlight.

Want a nostalgia hit? Watch the trailer for The Mummy. Post continues below.

Fraser – the youngest of four boys – was born in Indianapolis, Indiana, to two Canadians.

As a child, Fraser moved around a lot, living in Switzerland, the Netherlands, California, Ottawa and Seattle, before graduating high school in 1990.

Although Fraser initially began acting at a small college in New York City after high school, he soon moved to Hollywood, where he decided to pursue a career in film.

By 1992, the actor had landed his first leading role in the comedy film Encino Man, which is now considered a cult classic.

In the following years, Fraser appeared in a number of small roles in films such as School Ties, The Scout, With Honors and Airheads.

But it was his leading role in the 1997 film George of the Jungle which would secure Fraser's "rising star" status.

Then, in 1999, came the adventure fantasy film The Mummy. 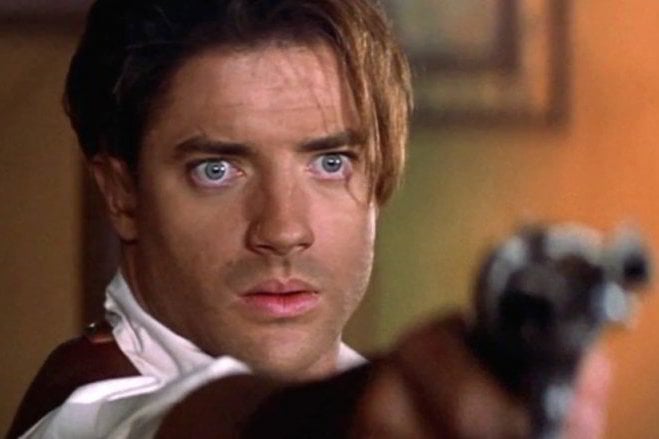 Almost immediately, work began on a sequel and in 2001, The Mummy Returns was released, making $443 million globally. The actor later returned to his role as Rick O'Connell in 2008 for The Mummy: Tomb of the Dragon Emperor, which made over $400 million.

But as The Mummy franchise dominated the box office, Fraser's other roles weren't quite as successful.

While Fraser proved himself as a talented actor in Gods and Monsters and the Oscar-winning Crash, a number of films that he starred in, including Monkeybone, Blast from the Past, Bedazzled, and Dudley Do-Right, ultimately failed at the box office.

Behind the scenes, Fraser was also struggling with the physical demands of his film roles.

In a 2018 interview with GQ, the actor opened up about the struggle to maintain his "hunky" body.

"I believe I probably was trying too hard, in a way that's destructive," he recalled.

As a result, his body was virtually falling apart.

"By the time I did the third Mummy, I was put together with tape and ice - just, like, really nerdy and fetishy about ice packs. Screw-cap ice packs and downhill-mountain-biking pads, 'cause they're small and light and they can fit under your clothes. I was building an exoskeleton for myself daily," he recalled. 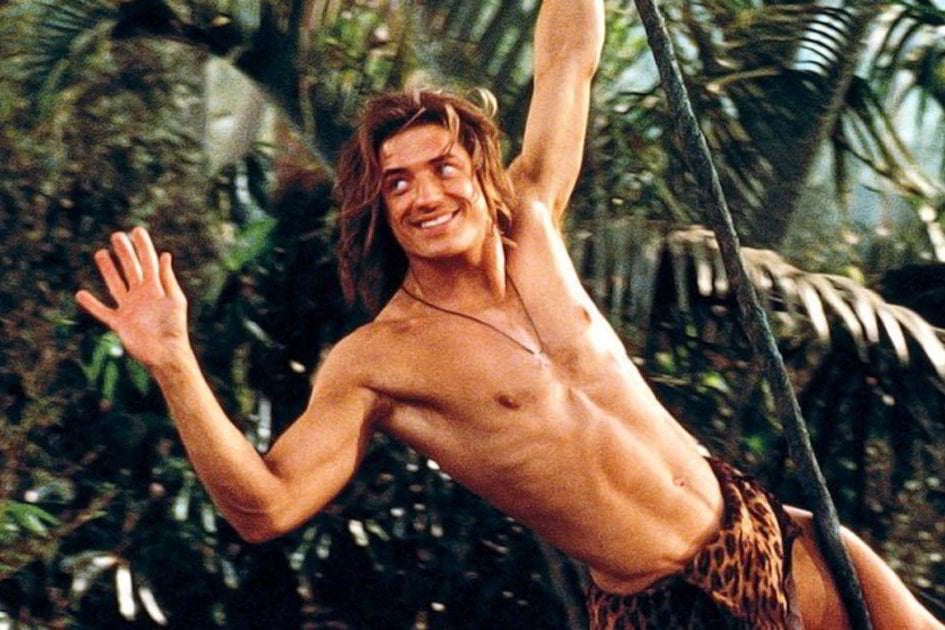 Brendan Fraser in George of the Jungle. Image: IMDb.

For almost seven years, the actor was in and out of hospital undergoing multiple surgeries including a partial knee replacement, back surgery, and vocal cord surgery.

As a result of Fraser's medical woes, the actor's career plummeted after 2010, leading him to take on mostly minor roles and a number of guest appearances on TV shows.

Speaking to GQ in 2018, Fraser opened up about another hardship that had kept him out of the public eye.

In the lengthy profile, Fraser came forward with allegations of sexual assault by a former president of the Hollywood Foreign Press Association.

The Mummy star alleged that the HFPA’s Philip Berk assaulted him at the Beverly Hills Hotel in 2003.

"His left hand reaches around, grabs my ass cheek, and one of his fingers touches me in the taint. And he starts moving it around," the actor said.

Berk recounted the incident in his memoir With Signs and Wonders, but said he pinched Fraser’s behind as a joke. According to Fraser, though, it wasn’t a joke, and he was overcome with fear and had to remove Berk’s hand.

"I felt ill. I felt like a little kid. I felt like there was a ball in my throat. I thought I was going to cry," he said.

He added he was afraid to go public with the incident as, "I didn’t want to contend with how that made me feel, or it becoming part of my narrative."

It was an experience which, he says, "made me retreat. It made me reclusive".

"I became depressed. I was blaming myself and I was miserable," he added.

Berk denied the claim in an email to GQ, saying "Mr Fraser’s version is a total fabrication."

But Fraser questioned whether the HPFA 'blacklisted' him as he was rarely invited back to the Golden Globes, which the HFPA hosts, after the incident occurred in 2003.

"I don't know if this curried disfavour with the group, with the HFPA. But the silence was deafening," Fraser said.

"The phone does stop ringing in your career, and you start asking yourself why. There's many reasons, but was this one of them? I think it was." 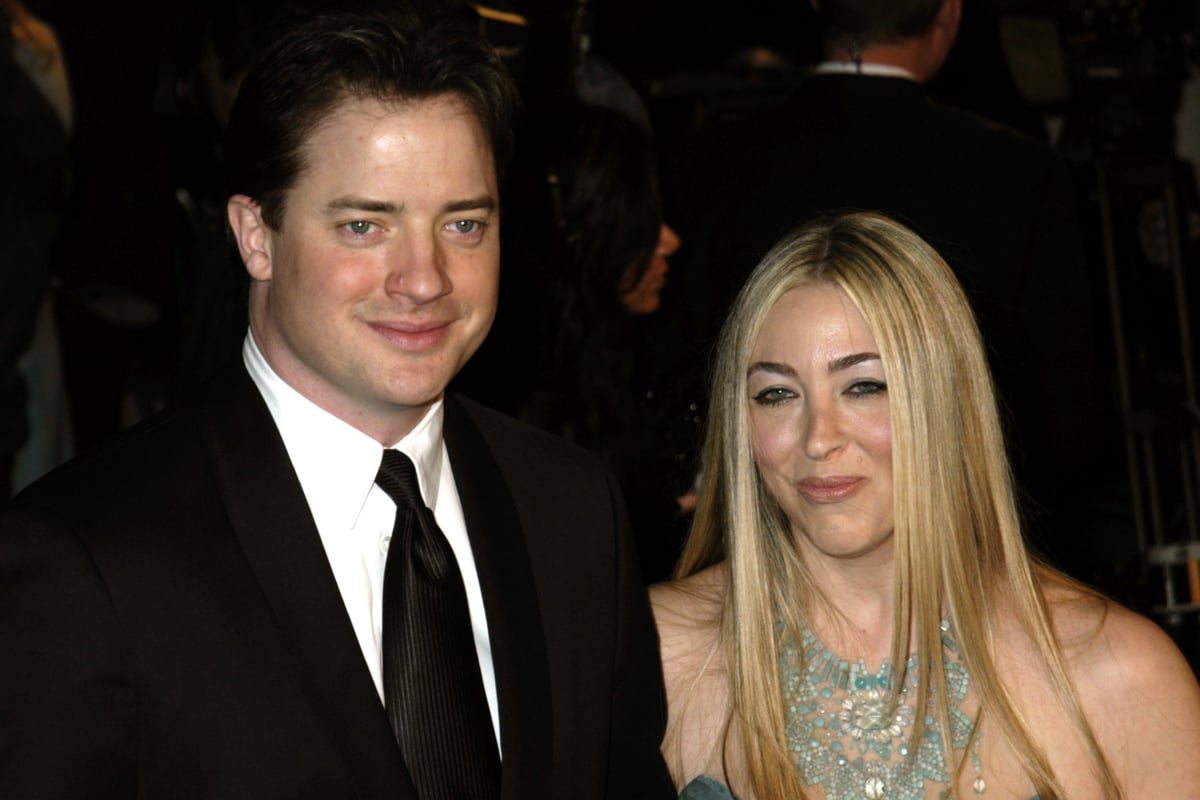 The alleged assault coupled with Fraser's subsequent divorce launched Fraser into a depression.

In 2013, the actor petitioned the courts for a reduction of his annual $900,000 child support payments, stating that he could no longer afford it. In response, Smith accused Fraser of hiding his assets.

A few years later, in 2016, Fraser gave his first interview in years.

In a 30-minute interview with AOL, Fraser spoke about his role on TV show The Affair. 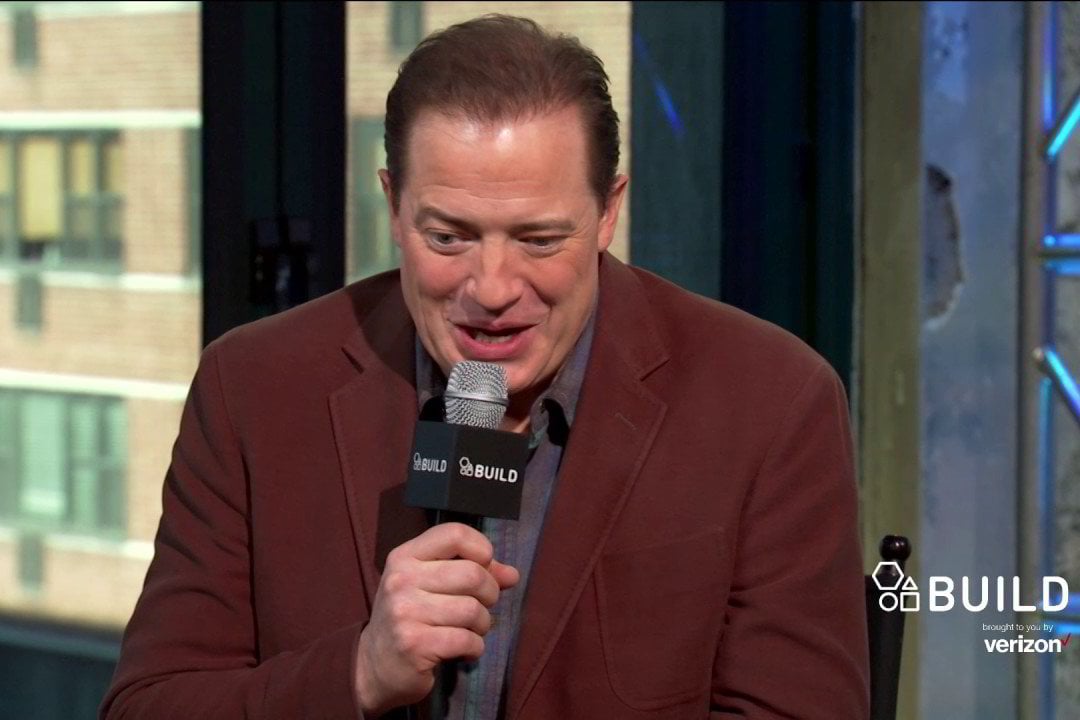 After the interview aired, fans pointed out that the actor looked "sad", leading fans to launch a Change.org petition titled 'Bring Brendan Fraser back into film/television'.

The petition, which was created in the hopes of helping Fraser "be happy", was created to help him get more acting roles. 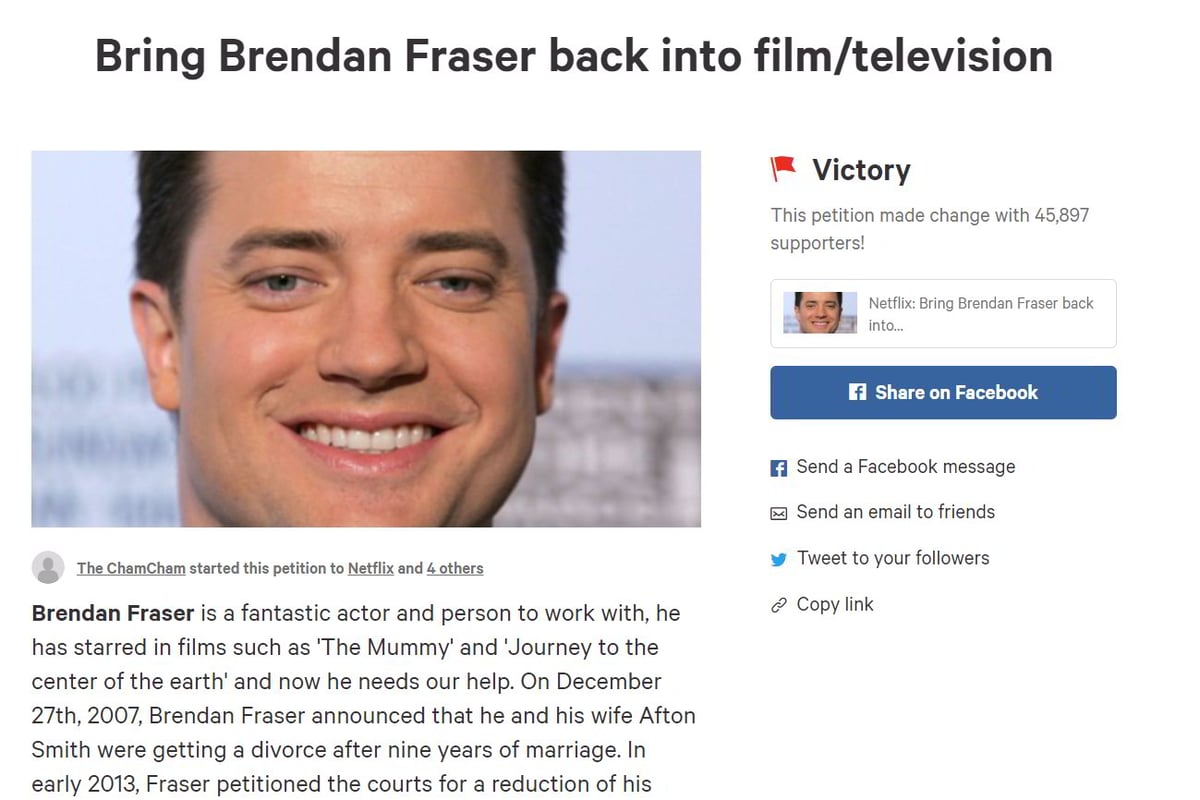 A Change.org petition was created in response to the "sad" interview. Image: Change.org.

But behind the 'sad Brendan Fraser' meme, the actor was dealing with the loss of his mother to cancer, which occurred just days before the interview was filmed.

"I buried my mum. I think I was in mourning, and I didn't know what that meant," he told GQ.

On top of that, Fraser also hadn't done a media interview in several years.

As of 2021, things are looking up for Brendan Fraser.

In recent years, the actor has appeared in a number of successful TV series including anthology-drama Trust, and political thriller Condor. 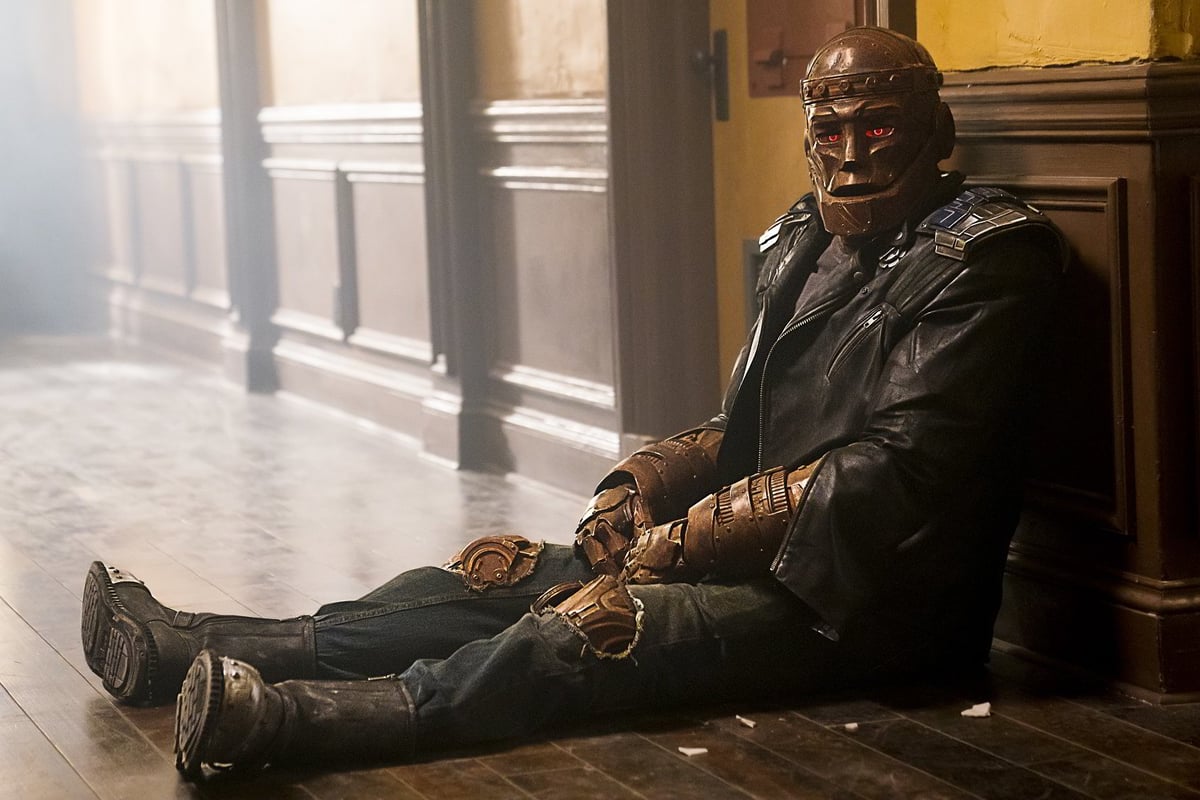 The 52-year-old also has a leading role in DC action comedy series Doom Patrol, and has been cast to appear in Martin Scorsese’s Killers of the Flower Moon alongside Leonardo DiCaprio.

Fraser has been in the spotlight online this month after a TikTok video from a virtual meet and greet with the actor went viral.

In the clip, Lindley Key, a cosplayer, shared that Fraser's fans are still behind him.

Brendan Fraser tears up when told about the support he’s received on social media after his casting in Martin Scorsese’s ‘Killers of the Flower Moon’. pic.twitter.com/SgC7u8aIk7

"There are so many people out there who love you," Key told the actor.

"And we're rooting for you, and we can't wait to see what you do next."

"Fraser was such a huge part of our childhoods," Key told Insider. "His movies were, and still are, loved by so many out there. And after all he has been through these past years, his fans are thrilled to see him happy and back to work."

This post was originally published on September 8, 2020, and has been updated with new information.

Reply
Upvote
1 upvotes
'In the following years, Fraser appeared in a number of small roles in films such as School Ties, The Scout, With Honors and Airheads.' - Not sure 3 lead roles and the top supporting actor would be classified as 'small roles'.
M
maggiec 2 years ago

Reply
Upvote
I've always loved Brendan Fraser and was alarmed at the top of the article with the reference to sexual assault. I thought "oh no not Brendan". Although it's terrible what happened to him, at least it wasn't him doing the assaulting.  He's a wonderful and under-rated actor. You didn't mention his role as an evil presence in 'The Quiet American'. I've often wondered what happened to him. I really hope to see him on the screen again soon.
Resources
Very Peri
Skin
News
General
Opinion
True Crime
Politics
Sport
Explainer
Entertainment
Celebrity
Reality TV
Movies
TV
Books
Rogue
Royal
Lifestyle
Beauty
Fashion
Weddings
Home
Wellness
Health
Fitness
Travel
Food
Family
Before The Bump
Pregnancy
Baby
Kids
Teens
School
Parent Opinion
Work & Money
Money
Finance
Career
Lady Startup