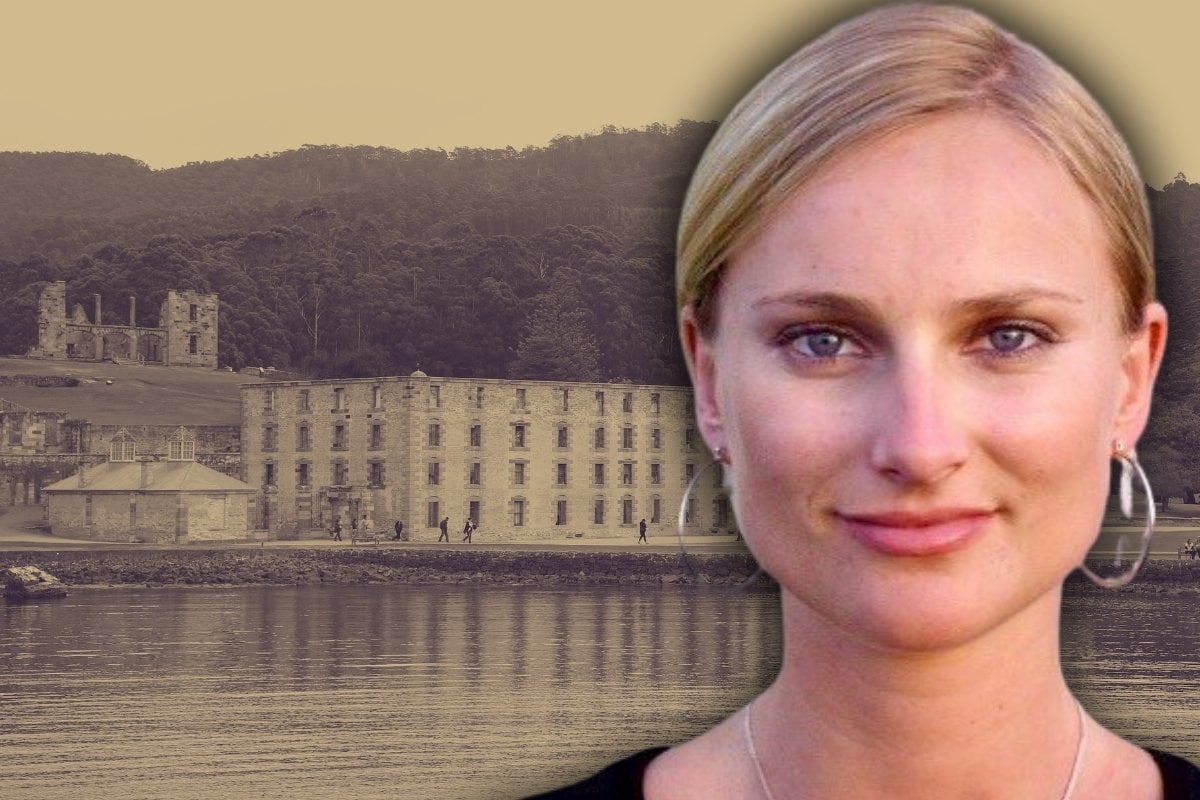 It was around lunchtime on April 28, 1996, when Anita Bingham heard the first bang.

The 17-year-old had only been working at Tasmania's Port Arthur Historic Site for about a month. She was a waiter at the Frances Langford Tearooms, one of two cafes at the former convict settlement.

A moment later, there was another bang. And another.

Bingham figured it must have been a historical reenactment; actors staging a clash between convicts and guards for the benefit of the hundreds of tourists present that day.

She wandered outside towards the sounds. But as the bangs continued, she felt a rising unease.

"I could see people ducking behind walls of the buildings on the site. But it was quite a distance from me," Bingham told Mamamia's True Crime Conversations podcast. "I couldn't quite see exactly what was going on."

Listen: Listen to Anita's story on True Crime Conversations below or subscribe via your favourite podcast app.

What Anita Bingham witnessed unfolding that day was no show. It was one of the deadliest crimes in modern Australia's history.

The couple owned a guesthouse called Seascape on the Tasman Peninsula. Bryant's father, Maurice, had been eager to purchase the property several years prior, but the Martins beat him to it.

Maurice Bryant, who struggled with mental illness, died by suicide in 1993, and while Bryant has never revealed a motive for his crimes, it's been speculated that the first part of his killing spree was an act of revenge in his father's name. 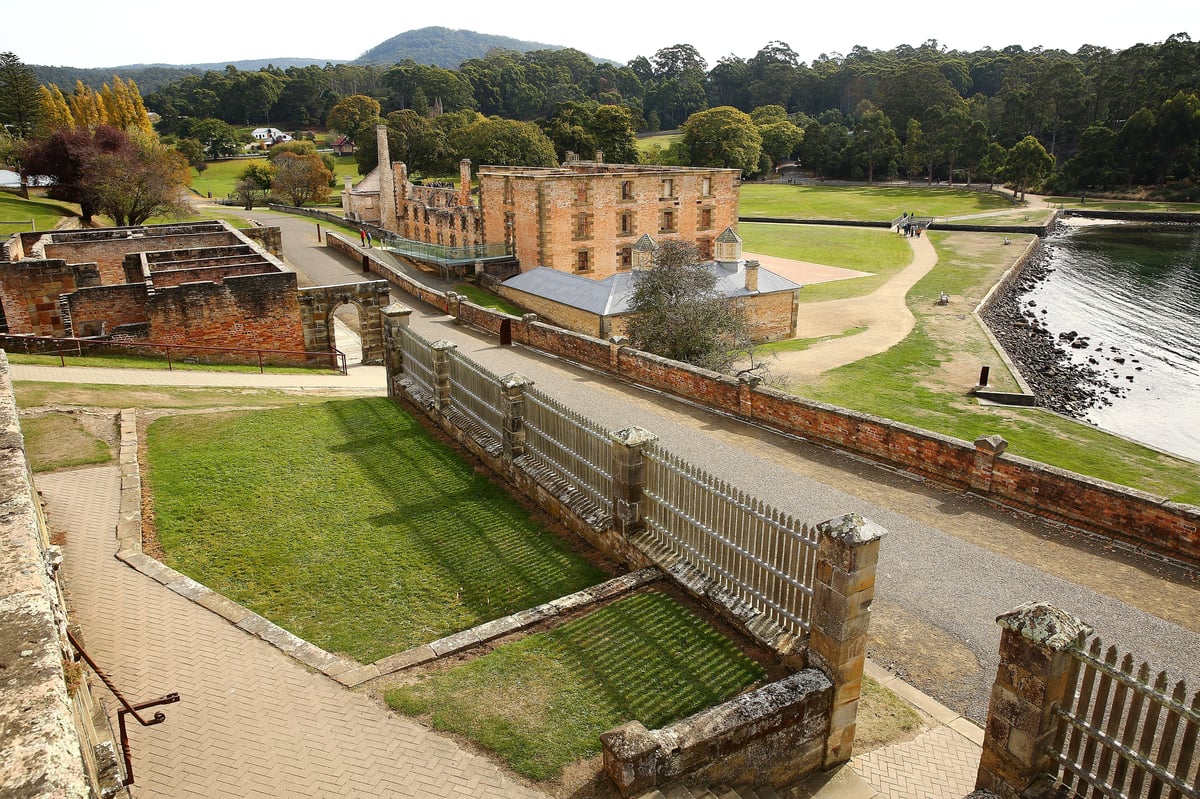 After killing the Martins at Seascape around midday on April 28, Bryant drove roughly five kilometres to the Port Arthur Historic Site.

In his car were two semi-automatic rifles, a 12-gauge shotgun, two sets of handcuffs, a rope, a hunting knife and several containers of petrol.

Bryant paid the entry fee at the site and proceeded to the Broad Arrow Cafe at around 1.30pm, where he sat outside and ate lunch — quickly, witnesses told police.

He then walked back in and opened fire on staff and guests with an AR15. He shot with savage indiscriminateness, claiming 33 lives inside the cafe, at the gift shop, in the car park and at a nearby toll booth.

There was chaos at the site. Communication was patchy. And by the time authorities arrived at the isolated location, Bryant had already fled.

In the meantime, Anita Bingham and her colleagues kept tearoom customers locked inside the cottage, and served them tea and coffee and water to bide the time and keep them calm. It was all they could think to do.

"I remember having to reassure people that 'things are okay, remain seated'," she said.

Once the site was secured and the guests were evacuated, Bingham's boss instructed her to clean up the cafe as if it were any other ordinary day.

"It was a really weird moment," she said.

"I was just so terrified because we still really didn't know where [Bryant] was. And I was in there by myself for a while vacuuming this cottage out. And I kept looking over my shoulder all the time, because I was just like, 'Where is this guy?' I was so scared."

Bingham was cleared to leave, and that evening was met by her father at a nearby pub. She recalls running toward him and the safety she felt being held tightly in his arms.

"It was a sense of relief," she said. "But it really wasn't until I got home that night, sat down and the [television] news flashed in front of my eyes with cars being stopped on the highway... that's when it really sunk in and hit me. 'What the hell just happened?' Because it didn't feel real."

Numb with shock, Bingham struggled to sleep that night.

"The next few nights, I actually had a dream of him running after me with the gun," she said, "hunting me down."

Martin Bryant took two more lives while fleeing the scene. He killed 35 people in total and wounded at least 18 more.

He was arrested the following day at Seascape, following an 18-hour standoff with police that ended when he set fire to the property. His clothing alight, he fled the burning guesthouse and was detained.

Bryant ultimately pleaded guilty to all the murders and was sentenced to 35 life sentences, without parole. He remains behind bars at Risdon Prison Complex, a maximum-security correctional facility near Hobart. He is 53.

The massacre, which was the deadliest mass shooting by a single person in Australian history, prompted John Howard's Liberal government to introduce legislation heavily restricting the ownership and sale of automatic and semi-automatic weapons, as well as toughening licensing conditions.

The National Firearms Agreement passed in Parliament with bipartisan support just 12 days after the massacre.

For Anita Bingham, the personal legacy of April 28, 1996, is a complicated one.

She undertook several years of therapy to process the events of that day and help manage post-traumatic stress disorder. She is still unsettled by sudden loud noises, like a car backfiring or balloon popping, and struggles to watch movies or TV shows featuring guns.

For years, she found it difficult to vacuum without checking over her shoulder, or even to go to a cafe.

"I just wanted to sit where I could see the door," she said. "I still do that sometimes, which is really hard. I need to know who's coming and going from the cafe. And I get a little bit spooked if someone's walking in with a big bag."

She's been back to Port Arthur Historic site a handful of times, and a year ago even took a job there as a ticketing officer.

"I really loved that because I do love people, I love tourism, I love visitors, and I get excited about them coming to see Tassie because it's such a beautiful place," she said.

"But some people would just walk in the door and be curious about the shooting... [They'd say] 'Oh, can you tell me where that crazy man just went and killed everyone? Is that where I'm standing now? Was it there? Was it there?'

"I found it hard. Nearly on a daily basis, someone would mention the shooting. I couldn't do it anymore. I just had to leave."

But Bingham has also experienced something called post-traumatic growth, which is when survivors experience positive transformation after trauma.

"I really learned a lot from that day. And what I learned most of all was life is just so short," she said.

"I remember just being in the counsellor's chair at 17, and I had a bucket list of stuff.

"I just wanted to live life to the fullest. And I did. I went around Australia in a camper van when I was 21, and then I took off overseas and travelled the world many times now... That's something that's changed my perspective."

Listen: The People of Port Arthur Speak, 25 Years On...

If you are struggling with a mental health problem, or you are feeling overwhelmed and having difficulty coping, support is available. Call Lifeline on 13 11 14 to speak to a trained Crisis Counsellor.

Reply
Upvote
1 upvotes
I’m a Tasmanian and I was 16 when this terrible day happened. I can tell you... every heart in Tassie broke a little on this day, we lost our innocence. I now have two children and we spend many holidays in Port Arthur. It is such a beautiful place.
M
mamamia-user-482898552 10 months ago

The massacre, which was the deadliest mass shooting by a single person in Australian history, prompted John Howard's Liberal government to introduce legislation heavily restricting the ownership and sale of automatic and semi-automatic weapons, as well as toughening licensing conditions.

Howard headed up a Coalition government. This is an important distinction make, given that much of the opposition to gun reform came from rural areas and supporters of the National party. Tim Fischer - head of the Nationals and deputy PM at the time - did a lot of the heavy lifting in selling the policy to what was a reasonably hostile supporter base.
Z
zaky 9 months ago

Reply
Upvote
1 upvotes
@mamamia-user-482898552 I agree that Tim Fisher was instrumental for getting the policy accepted by the country voters.  For that Australians should be grateful.
What should not be underestimated was also the support Kim Beasley and the whole ALP party. The ALP in the past tried to introduce gun control laws in state level and it was always opposed by the Liberal and National parties, losing elections on this issue.  However in that occasion Kim Beasley acted as a statesman for the long term good of all Australians and supported John Howard.  Controversial changes like that unfortunately can only be brought by conservative governments with the support of a Labor opposition as the conservatives will do anything to oppose any Labor policies when in opposition (climate change policy the latest example).
News
General
Opinion
True Crime
Politics
Sport
Explainer
Entertainment
Celebrity
Reality TV
Movies
TV
Books
Rogue
Royal
Lifestyle
Beauty
Fashion
Weddings
Home
Wellness
Health
Fitness
Travel
Food
Parents
Before The Bump
Pregnancy
Baby
Kids
Teens
School
Parent Opinion
Work & Money
Money
Finance
Career
Lady Startup
Relationships
Sex
Dating
Separation
Friendship
Family
Real Life
Couples