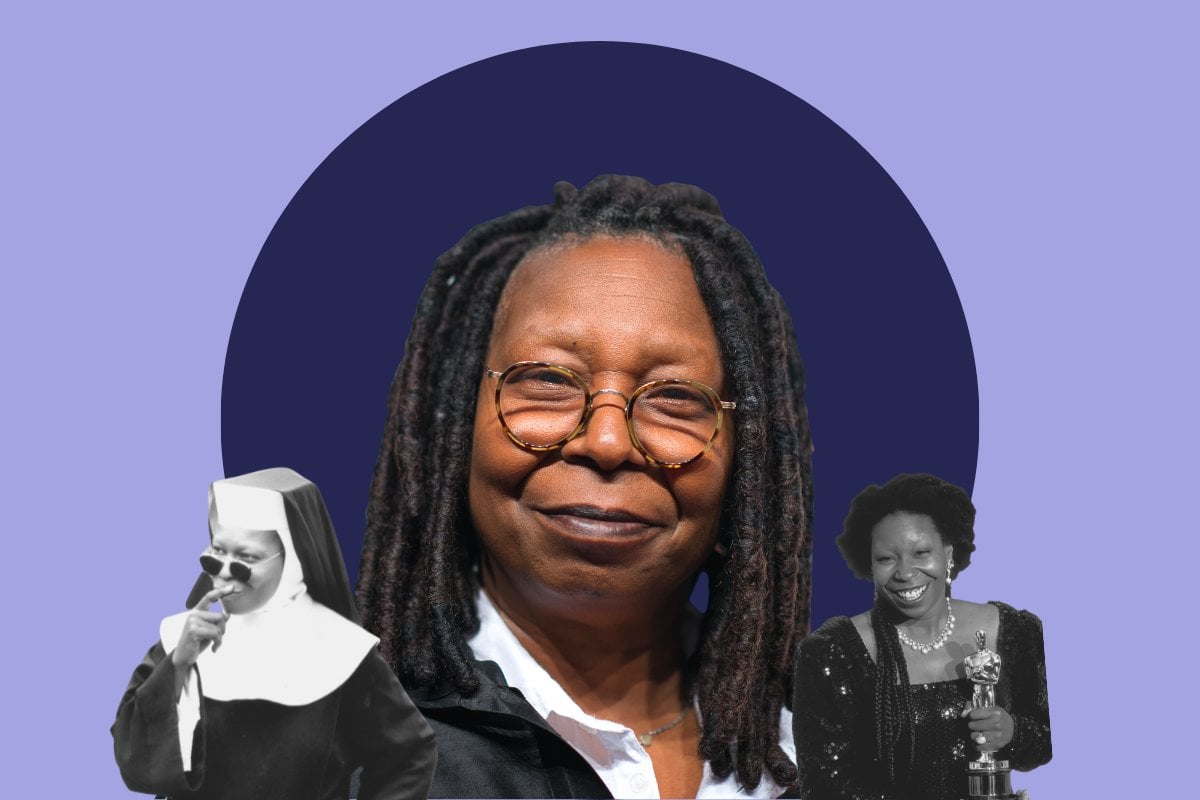 Warning: This post deals with racism, domestic abuse and rape, and could be triggering for some readers.

There have only been 16 people in history to tick off the EGOT.

An EGOT, an acronym for the Emmy, Grammy, Oscar, and Tony Awards, is the designation given to people who have won all four awards, celebrating the very best in television, recording, film and theatre.

It's the grand slam of entertainment, and Whoopi Goldberg earned the title in 2002 after decades of accolades.

Yet in the 20 years since, Whoopi's incredible creative achievements have time and time again been overshadowed by controversy.

The most recent furore erupted on January 31, when Whoopi said on an episode of The View, the talk show she has worked on since 2007, that the Holocaust 'was not about race'.

During a discussion on the show about a Tennessee school's banning of Maus, a Pulitzer Prize-winning graphic novel about Nazi death camps during World War II, she said the Holocaust was not "about race", but "white on white" violence and "man's inhumanity to other man."

"My words upset so many people, which was never my intention," she said on February 1. "I understand why now and for that I am deeply, deeply grateful because the information I got was really helpful and helped me understand some different things."

She was suspended as co-host of The View for two weeks.

At the beginning of her comedy career, she changed her name to Whoopi Goldberg. 'Whoopi' comes from a whoopee cushion, but the story of her (Jewish) last name is less concrete.

One infamous account is that her "Catholic-Jewish" mother believed the name Johnson was "not Jewish enough" for her daughter to be successful. But Goldberg has claimed she is Jewish, and the name is part of her family.

"My mother did not name me Whoopi, but Goldberg is my name, it's part of my family, part of my heritage. Just like being black," she told The Jewish Chronicle.

"I just know I am Jewish. I practise nothing. I don't go to temple, but I do remember the holidays. Religion is a lot of work, it's exhausting. So I keep it simple, I have a pretty good relationship with God. We talk."

In 1997 she told the Baltimore Sun, she has said her family is "Jewish, Buddhist, Baptist and Catholic" and that she "took the last name for a Jewish ancestor."

In his 2008 book In Search of Our Roots, Henry Louis Gates Jr claimed that all of Goldberg's traceable ancestors were African Americans, that she had no known German or Jewish ancestry, and that none of her ancestors were named Goldberg.

The View - which for the uninitiated, is a daytime talk show featuring a multi-generational panel of women, who discuss the day's 'hot topics' - is no stranger to controversy.

Among other controversies was former co-host Rosie O'Donnell's feud with future US president Donald Trump, O'Donnell "speaking in mock Chinese" and saying "655,000 Iraqi civilians are dead. Who are the terrorists?" while debating the Iraq War.

In 2018, co-host Joy Behar mocked US Vice President Mike Pence's religious beliefs, stating: "It's one thing to talk to Jesus, it's another thing when Jesus talks to you. That's called mental illness, if I'm not correct, hearing voices." She apologised a month later.

And for years, the show featured conservative pundit Meghan McCain, who regularly butt heads with Goldberg and Behar, drawing a multitude of viral clips and headlines. 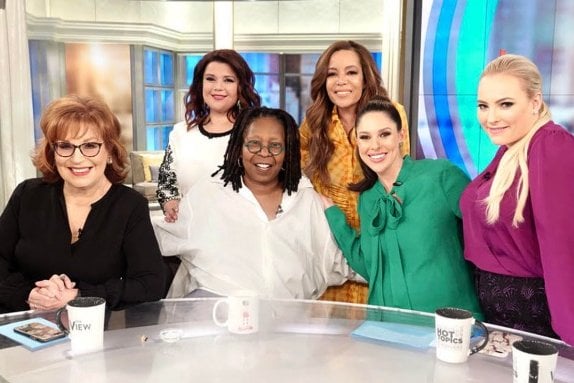 Even before now, Goldberg has been involved in her fair share of drama thanks to the show.

For years, she was praised for her many back-and-forth discussions with McCain, and celebrated for her often moral takes. But there has also been many missteps.

In 2010, she defended her friend, actor Mel Gibson, following the release of racist and antisemitic audio where he ranted and verbally abused his then-girlfriend, Oksana Grigorieva.

"I don't like what he did here," Goldberg said on the show. "But I know Mel and I know he's not a racist. He may be a bonehead. I can't sit and say that he's a racist, having spent time with him in my house with my kids."

On TV, she has also defended former football player Ray Rice after he was caught on video violently assaulting his then-girlfriend, said she didn't believe director Roman Polanski's rape of a 13-year-old girl "was rape-rape", and initially defended Bill Cosby following dozens of rape allegations. She later changed her mind on Cosby.

In 2019, Goldberg faced backlash for 'victim-blaming' actor Bella Thorne, after she criticised Thorne for taking nude photos of herself that a hacker threatened to release.

Before she made headlines for her takes, Goldberg was best known as a beloved dancing nun in Sister Act, a mistreated woman in The Color Purple or a feisty psychic in Ghost.

She first rose to prominence with her one-woman show The Spook Show in the early 1980s. The show ran on Broadway and was taped for a broadcast on HBO.

This performance caught the eye of Steven Spielberg, who offered her the lead role in The Color Purple. Film critic Roger Ebert described Goldberg's performance as "one of the most amazing debut performances in movie history", and the film earned 11 Oscar nominations, including one for Goldberg as Best Actress.

Between 1985 and 1988, Goldberg was the busiest female star, making seven films, and with 1992's Sister Act 2, she became the highest-paid actress in the world. 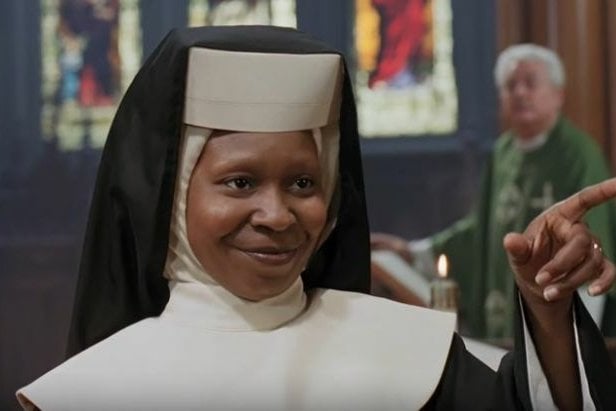 She then won the Academy Award for Best Supporting Actress for 1990's Ghost.

She was involved with actor Ted Danson in the early 90s, which led to one of her most well-known controversies.

In 1993, Danson took part in her Friar’s Club roast in blackface. While many were offended, Goldberg said she enjoyed it and had actually written a lot of the routine for him.

She continued to act throughout the 90s and early 2000s, before pivoting more to television.

In 2004, she was involved in a controversy at a fundraiser for Democratic presidential nominee John Kerry when she made a joke about President George W. Bush.

"We should keep Bush where he belongs, and not in the White House," she said, alluding to her pubic area.

From August 2006 to March 2008, Goldberg hosted Wake Up With Whoopi, a nationally syndicated morning radio talk show, and in October 2007 announced on air that she was retiring from acting because she was no longer sent scripts.

She has continued to act since, in conjunction with The View which she began co-hosting in 2007.

She is next slated to appear in a Sister Act sequel, Sister Act 3, for Disney+.

Reply
Upvote
2 upvotes
I mean, the Jews have only been persecuted as a race for thousands of years, she should know that.
M
mamamia-user-482898552 4 months ago