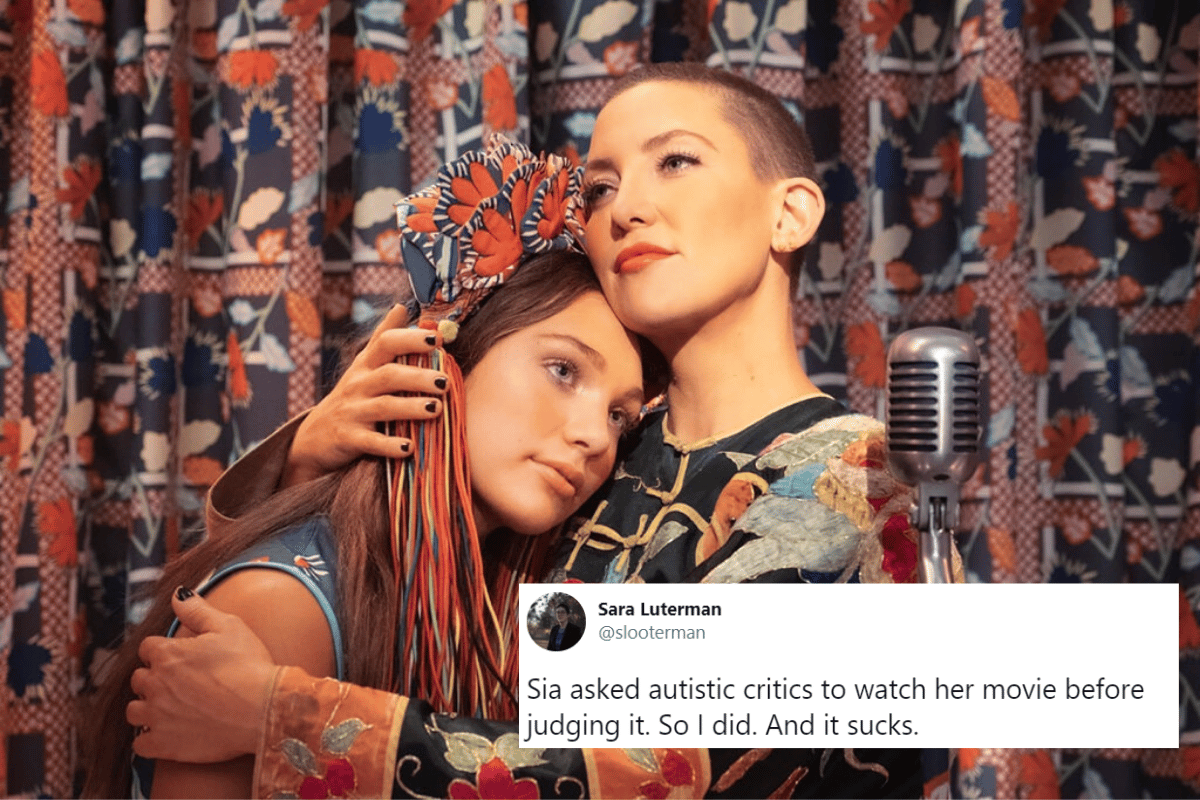 The ultra-private Australian singer-songwriter has spent years masking herself from attention with long-fringed wigs and comically large hats.

But despite her best efforts to fend off fame, Sia has once again found herself at the centre of a social media storm.

It all began when the trailer for Sia's directional debut, Music, was released.

Watch the trailer for Sia's film, Music, below. Post continues after video.

Produced, directed and co-written by Sia, Music is a story about a newly sober drug dealer (Kate Hudson) who finds herself the sole guardian of her sister (Maddie Ziegler), a teenager who lives with additional needs.

When the trailer was released, criticism mounted over the casting of Maddie Ziegler, an 18-year-old dancer who achieved worldwide fame through her performances in Sia's music videos.

On social media, advocates expressed their disappointment the role wasn't given to a neuro-diverse actor. In response, the 45-year-old, who has since deleted her Twitter account, fiercely defended her decision.

In response, one user wrote: "Several autistic actors, myself included, responded to these tweets. We all said we could have acted in it on short notice. These excuses are just that – excuses. The fact of the matter is zero effort was made to include anyone who is actually autistic."

Several autistic actors, myself included, responded to these tweets. We all said we could have acted in it on short notice. These excuses are just that- excuses. The fact of the matter is zero effort was made to include anyone who is actually autistic. #NothingAboutUsWithoutUs

In an interview with The Sydney Morning Herald, Sia admitted that she "f**ked up" by sending the tweets. "Looking back, I should have just shut up; I know that now," she said.

Amid the release of Music, Sia's directional debut is facing a new wave of controversy.

Although the film has received nominations at the Golden Globe Awards, the film has largely been panned by critics, receiving overwhelmingly negative reviews.

On website Rotten Tomatoes, the film currently has an average rating of 3.9/10. The website's critic consensus reads: "Offensive in its depiction of autism — and painfully misguided in essentially every respect — Music is a vanity project that begs to be turned down."

In reviews, critics described the film as "embarrassingly out of touch".

Sia asked autistic critics to watch her movie before judging it. So I did. And it sucks. https://t.co/r020HoU28F

As Matthew Rosza wrote for Salon, "[It's not] just offensive; it’s patronising. The central role is played in a way that had already been recognised as embarrassingly out of touch more than a decade ago. It’s inexcusable."

"Every baffling minute of Sia’s profoundly ill-conceived directorial debut will make you ask 'why?' in a different way," he wrote.

I’m watching Sia’s movie, in order to write a detailed & chronological review (so that nobody else watches it out of curiosity).

But for now, I just want the public to see a few things that speak for themselves, starting with this image: pic.twitter.com/jPqtd5tLOz

"The performance is a caricature of autistic body language," The Autisticats, a page run by three autistic adults, shared.

"It’s unsettling, and insincere. And it’s deeply reminiscent of the exaggerated mannerisms non-autistic people often employ when bullying autistic and developmentally disabled people for the ways we move."

The fact that Ziegler is not autistic, and the fact that her performance is so heavily exaggerated, turns the entire movie into one long display of mockery.

I know that “wasn’t Sia’s intention.”

But it doesn’t make things any easier to stomach.

Now, after receiving a Golden Globe nomination for Best Motion Picture – Musical or Comedy, thousands are calling for the film's nomination to be revoked.

At the time of publishing, the online petition has received more than 102,000 signatures.

"Sia has claimed the movie is a 'love letter to the autism community', however, the music segments are filled with strobing lights, colours, loud sounds, and quick camera movements, which is very overstimulating," they continued.

"The fact that Music has been nominated for two Golden Globes awards illustrates the complete disregard the entire entertainment industry has for inclusivity and minority representation." What has Sia said about the film?

In January 2021, Sia responded to the backlash regarding her decision to cast Maddie Ziegler during an appearance on The Project.

"I realised it wasn’t ableism — I mean, it is ableism, I guess, as well — but it’s actually nepotism, because I can’t do a project without her," she said.

"I don’t want to. I wouldn’t make art if it didn’t include her."

She also shared that Ziegler was "scared" about taking on the lead role in Music.

"She just said, 'I don’t want anyone to think I’m making fun of them,'" the singer-producer explained. "And I bald-facedly said, 'I won’t let that happen.'"

She continued, "I realised I couldn’t really protect her from that, which I thought I could."

In February, Sia was criticised for scenes in Music that showed Ziegler's character getting restrained — something advocates have condemned. In fact, The National Autism Association described the scenes involving the restraint of Ziegler's character as "dangerous and abusive".

In response, Sia apologised, adding the scene will be removed "from all future printings" of the film.

"I plan to remove the restraint scenes from all future printings. I listened to the wrong people, and that is my responsibility, my research was clearly not thorough enough, not wide enough."

She continued: "I promise I have been listening. The motion picture Music will, moving forward, have a warning at the head of the movie."

What has Maddie Ziegler said about the film?

In January, Maddie Ziegler said she was "honoured" to play the lead role in Music.

"I love this movie so much," she told Germany's Cinema magazine.

"Taking on a character like this, I was sold because of the dream fantasy world. Of this imagination that Music is transformed into. That creative side, that unity, and love and community that all comes together in the end is really beautiful. And that's why I'm attached to it so much." 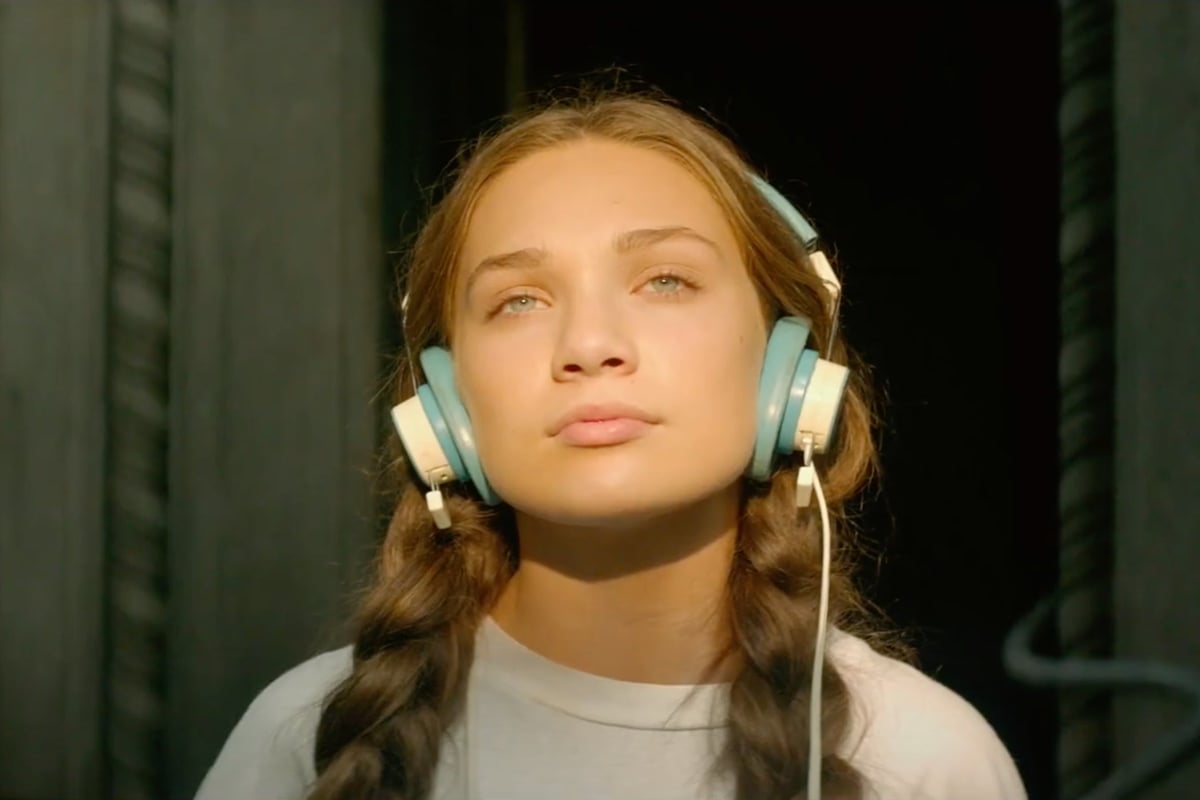 Since then, however, Ziegler has largely remained silent on the film's controversy.

"I’ve actually stayed out of all of it just because, you know, I’m 18 years old and it’s a lot of pressure," she told The Independent.

"I understand why people would want someone who’s actually on the spectrum with autism to play this character. But in terms of the dance sequences, I think that’s why Sia chose me to bring the dream world to life. It was all [made] with good intentions and with a good heart."

What has Kate Hudson said about the film?

Kate Hudson, who has been nominated for a Golden Globe for her role in the film, has also responded to the criticism saying that it's "an important conversation to have".

"I think when people see the film, they will see the amount of love and sensitivity that was put into it," she said on a recent interview on Jimmy Kimmel Live.

"It is an important conversation to have, and it’s not just about this movie, but as a whole, about representation. For me, when I hear that there’s anybody that feels left out I feel terrible." 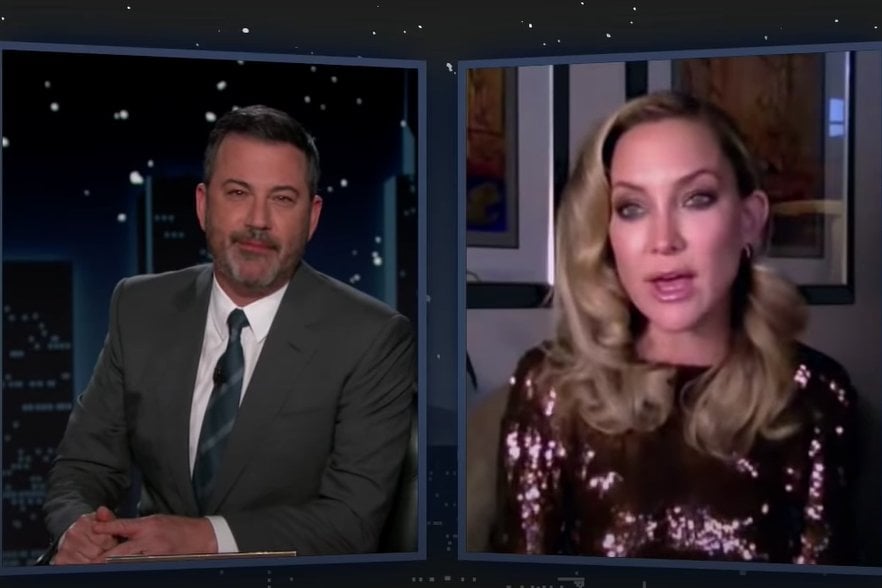 "Nobody has really asked me [about the backlash], they have only asked me to comment on it through a quote," she added.

"It’s not a soundbite conversation, I think it’s an ongoing, important dialogue to be had about neurotypical actors portraying neurodivergent characters. It is an important one to have with people who are experts and really know how to engage in the conversation, so I encourage it, really, truly. We are listening."

The 41-year-old went on to say that "it's our job to listen and encourage more conversation".

"The spectrum is so wide and should be approached with far more conversation and understanding of how can we be more representative, what are the best ways to do that."

"We want to tell the best stories we can. There is no one who wants to upset anybody. When people feel upset about anything, it's our job to listen and encourage more conversation with other people who want to tell these stories."

Reply
Upvote
1 upvotes
I posted this on my Facebook page on January 17...
I have been thinking about this post for a while and now is the time to post it...
Please reconsider watching movies and TV shows which feature a person with a disability who is played by a non-disabled actor.
I have 2 young men in my family with autism, with one who loves the stage and loves to perform. However, it is nearly impossible to find a movie or tv series with an autistic person playing an autistic character.
The latest example is 'Music' by Sia. She has cast her protege and friend in the main role of a young woman with autism. Maddie Ziegler is an amazing dancer and actor, but she is not autistic.
Other examples are: The Good Doctor, The A Word, Atypical, Temple Grandin, The Black Balloon, Please Stand By, X+Y, Snow Cake, Little Man Tate, The boy who could fly, I am Sam and SOOOOO many more.
These movies have used an autistic character as a key character and story line but the casting agencies did not hire an autistic actor to play the role.
Having characters with diverse abilities is essential in movies and TV... but there are so many actors out there with diverse needs who are ready to take on these roles. It is time for change!
Liz

Reply
Upvote
1 upvotes
My daughter is autistic and she displays many of the qualities that Maddie portrayed in the film and Maddie portrayed them beautifully.  I am so proud of Maddie.  Next time an actor plays a character with an illness or disability that they do not have like Adam in mom or aronzia in greys anatomy I wonder if there will be as much hatred.  I am guessing not even though I am sure there are actors in a wheelchair or missing limbs.   Don't listen to the haters Maddie and Sia.  My daughter and I both enjoy what you both bring to our world.
News
General
Opinion
True Crime
Politics
Sport
Explainer
Entertainment
Celebrity
Reality TV
Movies
TV
Books
Rogue
Royal
Lifestyle
Beauty
Fashion
Weddings
Home
Wellness
Health
Fitness
Travel
Food
Parents
Before The Bump
Pregnancy
Baby
Kids
Teens
School
Parent Opinion
Work & Money
Money
Finance
Career
Lady Startup
Relationships
Sex
Dating
Separation
Friendship
Family
Real Life
Couples