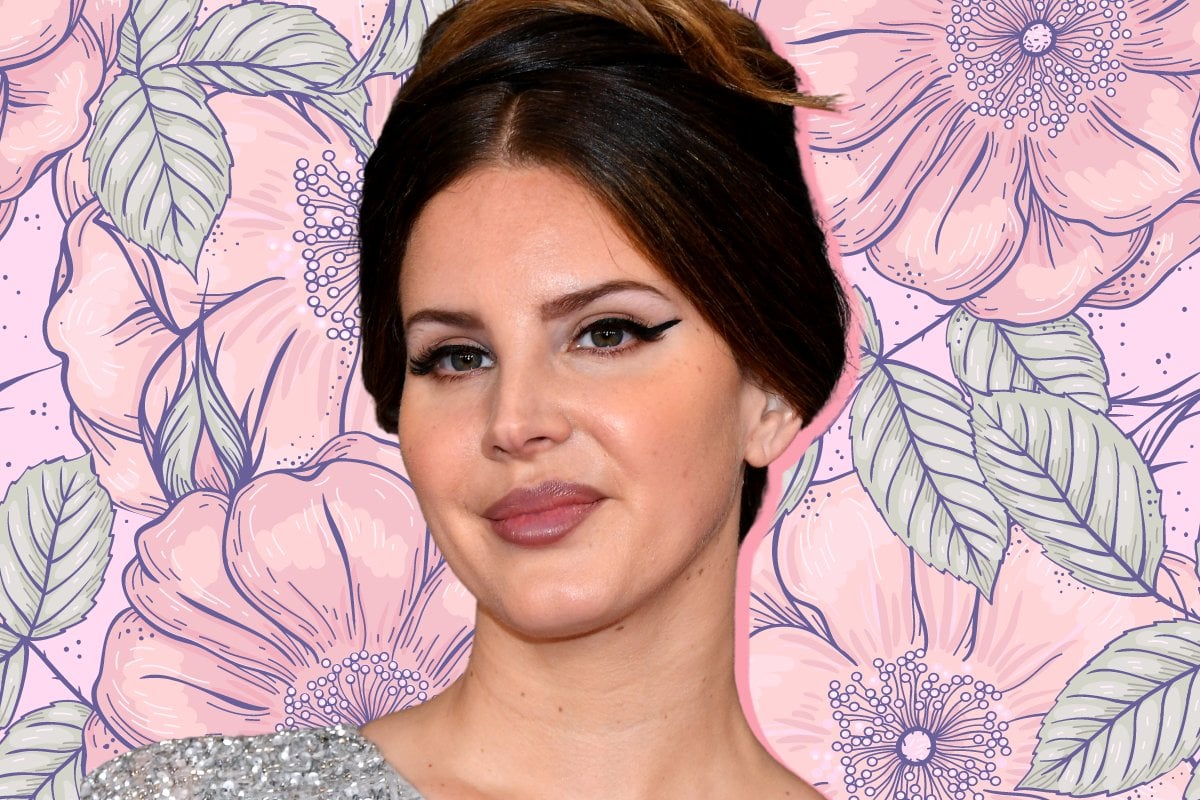 When Lana Del Rey dropped details of her highly anticipated 2021 album, Chemtrails Over the Country Club, in January fans were excited.

Until she started explaining herself.

She brought it up herself in an Instagram comment on a photo of the album's cover art. The image shows a group of women gathered around a table, in a black-and-white photo.

"Yes there are people of colour on this record's picture and that's all I'll say about that but thank you," she wrote.

However, she continued, naming her BIPOC friends.

"These are my friends this is my life... We are all a beautiful mix of everything - some more than others which is visible and celebrated in everything I do."

She attempted to prove her allyship: "In 11 years working, I have always been extremely inclusive without even trying to. My best friends are rappers, my boyfriends have been rappers," she wrote. 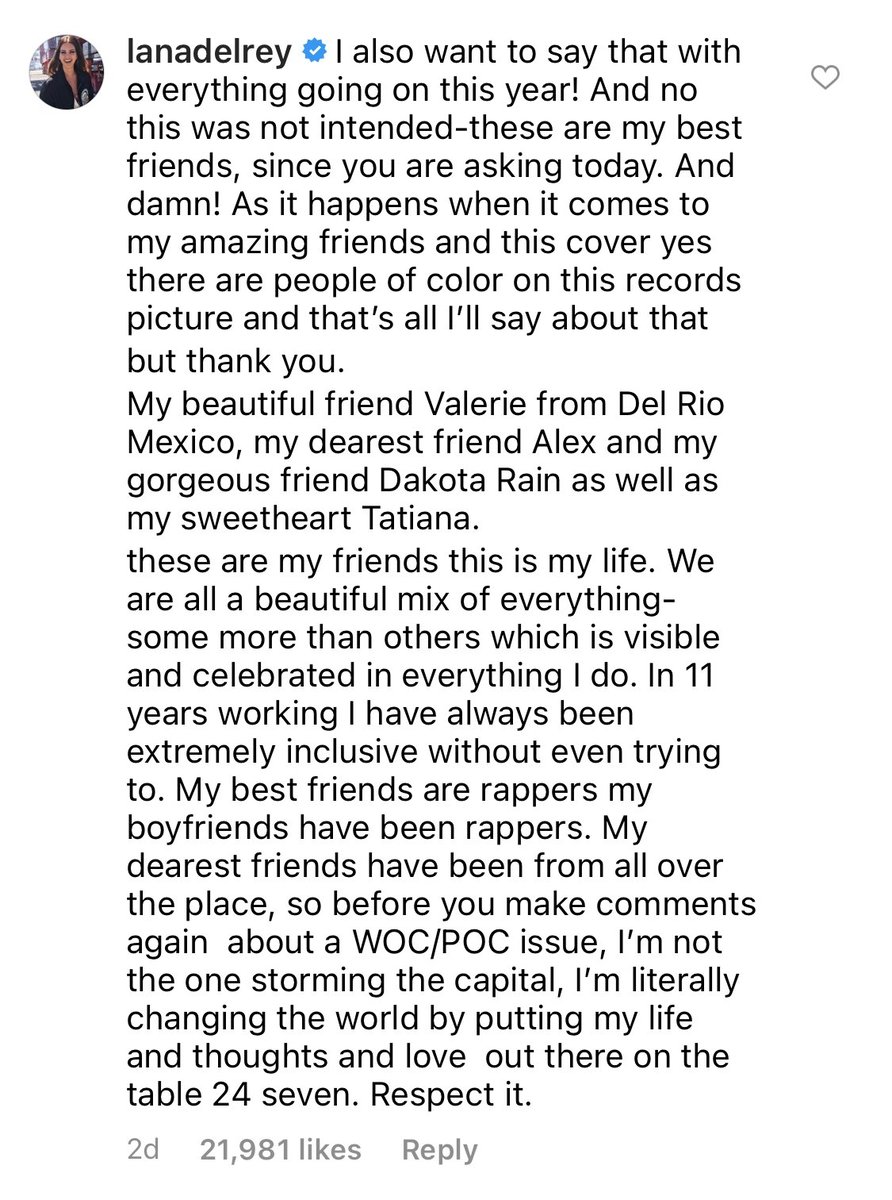 Then she linked it to Donald Trump supporters storming the US Capitol building on January 6, 2021.

"Before you make comments again about a WOC/POC issue, I'm not the one storming the capital, I'm literally changing the world by putting my life and thoughts and love out there on the table 24 seven," she wrote. "Respect it."

The comment seemed to be Lana's attempt to quash any criticism before it began, but it backfired.

She followed up with a BBC One radio interview where she discussed the controversy, that she herself started.

"Before I even put the album cover up, I knew what people were going to say," she said.

"So when they actually started saying things, I responded and I just said, 'I got a lot of issues but inclusivity ain't one of them.' It just isn't. You can't just make it my problem...

"I wasn't being preemptive, I was definitely responding. But I just feel like if that’s really what people are gonna say, I have an answer for them, which is that if you look closer, you will see people of colour. It's a black-and-white image, so zoom in, you know. It's just weird, you know?"

And she then found herself in more hot water, over comments about Donald Trump.

"The madness of Trump, as bad as it was, it really needed to happen. We really needed a reflection of our world's greatest problem, which is not climate change, but sociopathy and narcissism. Especially in America. It's going to kill the world," she said.

Just to take a moment to say that what I was describing w the bbc was that Trump is so significantly impaired that he may not know what he was doing due to his significant lack of empathy and the wider ranging problem is the issue of sociopathy and narcissism in America.

Lana, whose career took off in 2011 after uploading self-made music videos for her songs 'Video Games' and 'Blue Jeans' to YouTube, has spent a decade in the spotlight.

Throughout this time, she's released a dozen albums and a poetry collection, been nominated for six Grammys and been praised as one of the best songwriters in the US by none other than Bruce Springsteen.

But with success, comes controversy. And Lana knows it well.

Throughout her career, Lana has had a complicated relationship with the word 'feminist'.

In a 2014 interview with Fader, she said feminism was boring to her.

"For me, the issue of feminism is just not an interesting concept. I'm, more interested in, you know, SpaceX and Tesla, what's going to happen with our intergalactic possibilities.

In September 2015, with V Magazine she clarified her thoughts: yes, she was still more interested in space, but she wasn't anti-feminist.

"The luxury we have as a younger generation is being able to figure out where we want to go from here, which is why I've said things like, 'I don't focus on feminism, I focus on the future.'

"It's not to say that there’s not more to do in that area. I've gotten to witness through history the evolution of so many movements and now I'm standing at the forefront of new technological movements. I'm not undermining other issues. But I feel like that's obvious, like I shouldn't even have to bring that up." 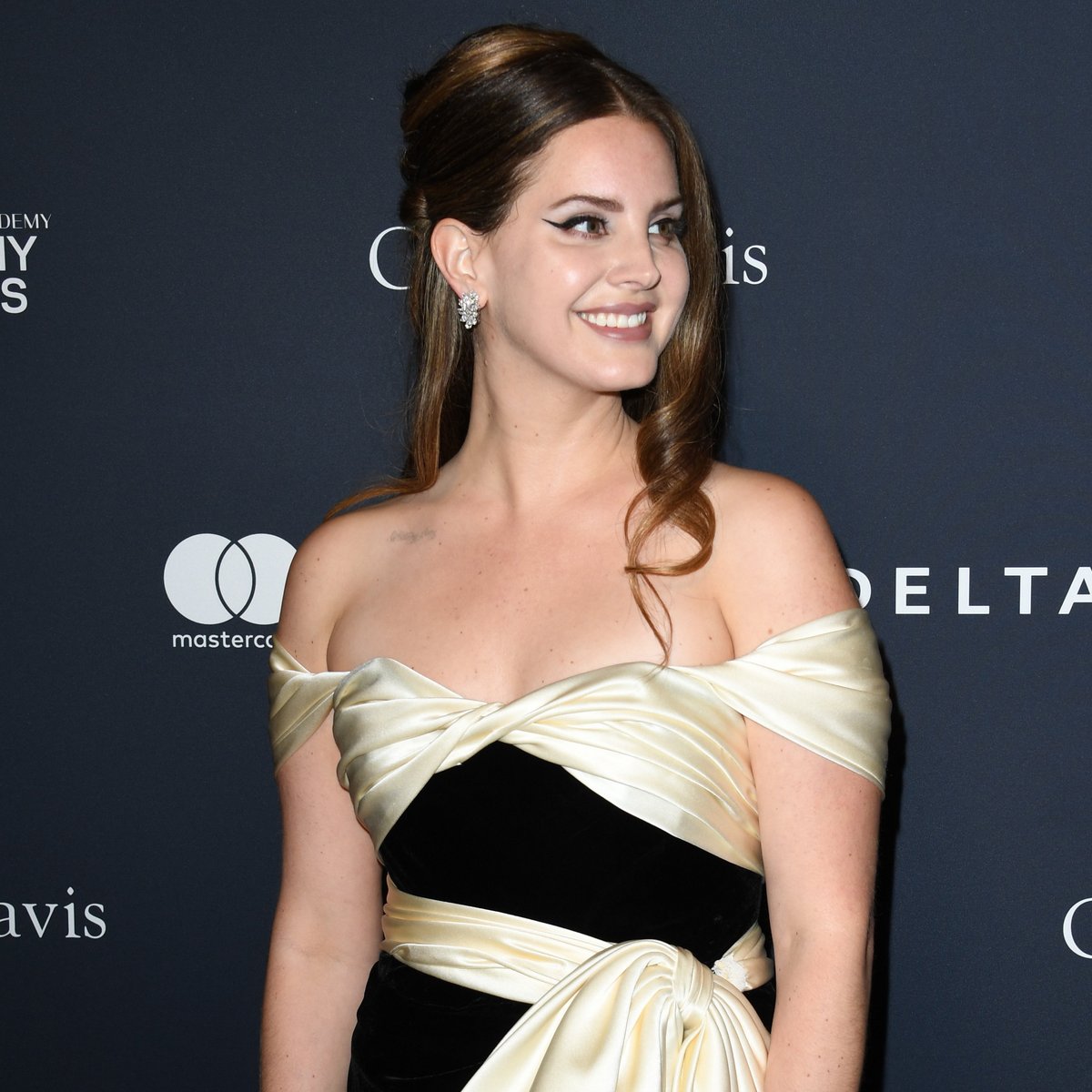 By 2017, Lana told Pitchfork her thoughts on feminism had changed "because things have shifted culturally".

"It's more appropriate now than under the Obama administration, where at least everyone I knew felt safe. It was a good time. We were on the up-and-up.

"Women started to feel less safe under [the Trump] administration instantly. What if they take away Planned Parenthood? What if we can't get birth control? Now, when people ask me those questions, I feel a little differently."

There's also been claims of cultural appropriation, with Lana wearing a feathered headdress in the 2012 'Ride' music video and appearing with two teardrop face tattoos in her 2013 short film 'Tropico'.

In 2018, after Kanye West announced his support for Donald Trump on social media, Lana - who performed at his wedding to Kim Kardashian - denounced him publicly.

"Your support of [Trump] is a loss for our culture. I can only assume you relate to his personality on some level," she wrote, referring to "delusions of grandeur" and "extreme issues with narcissism."

This lead to another public spat with rapper Azelia Banks, who responded with since-deleted tweets.

"To me this just looks like the typical white woman taking using a weakened target to 'pretend' to be an ally," Banks wrote.

For years, Lana has faced criticism for glamorising abuse in her music with lyrics including "He hurt me but it felt like true love".

In 2012, Lana released the cover art for her single 'Blue Jeans', featuring a man with his hands across her neck.

"She romanticised domestic 'ultraviolence' [the name of her 2014 album], had herself choked in videos and recycled The Crystals' 1962 line, 'He hit me and it felt like a kiss'," Helen Brown wrote for the Independent in 2019.

In May 2020, Lana responded to the claims in a lengthy Instagram post announcing the upcoming release of poetry books.

"Question for the culture," she asked her 18 million followers. "Now that Doja Cat, Ariana [Grande], Camila [Cabello], Cardi B, Kehlani and Nicki Minaj and Beyoncé have had number ones with songs about being sexy, wearing no clothes, f***ing, cheating etc. - can I please go back to singing about being embodied, feeling beautiful, being in love even if the relationship is not perfect, or dancing for money - or whatever I want - without being crucified or saying that I'm glamorising abuse?"

She added that she's "fed up with female writers and alt singers" saying her previous works and song lyrics "glamorise abuse".

"In reality, I’m just a glamorous person singing about the realities of what we are all now seeing are very prevalent emotionally abusive relationships all over the world.

"I feel it really paved the way for other women to stop 'putting on a happy face' and to just be able to say whatever the hell they wanted to in their music - unlike my experience."

She said her lyrics had made people say she'd "set women back hundreds of years".

While she raised good points about the double standards faced by men and women in the music industry, these were overshadowed in the reaction - because she seemed to diminish the accomplishments of women artists of colour to make her point.

As BuzzFeed News reporter Michael Blackmon put it, those women "have endured a lot of the same struggles as Del Rey - and often to a greater extent because of their race. There's an entire history of women singers and songwriters making music - the kind Del Rey seems to believe she invented - who are completely erased by her statement."

The statement saw reactions from across the industry, and Lana later said she'd only singled out those women as they were her favourite musicians.

"If you want to try and make a bone to pick out of that like you always do be my guest, it doesn't change the fact that I haven't had the same opportunity to express what I wanted to express without being completely decimated," she wrote in a comment.

"If you want to say that that has something to do with race, that's your opinion but that's not what I was saying."

.@LanaDelRey responds to backlash over Instagram post about her industry struggles, says she didn’t intend to call out women of color:

“I could’ve literally said anyone but I picked my favorite fucking people...don’t ever ever ever bro call me racist that is bullshit.” pic.twitter.com/DCjYd6FqKD

In response to her latest internet drama, over the explanation of her upcoming album cover, Lana singled out magazines that she considered had taken her out of context.

A woman still can’t get mad right? Even when a mob mentality tries to *incite

Despite everything, Lana's single and music video 'Chemtrails over the Country Club' dropped on January 11 to much fan support, and positive responses in early critical reviews.

Perhaps it's true what they say: all publicity is good publicity.

And with her album slated for a March released, who knows what could happen before then?