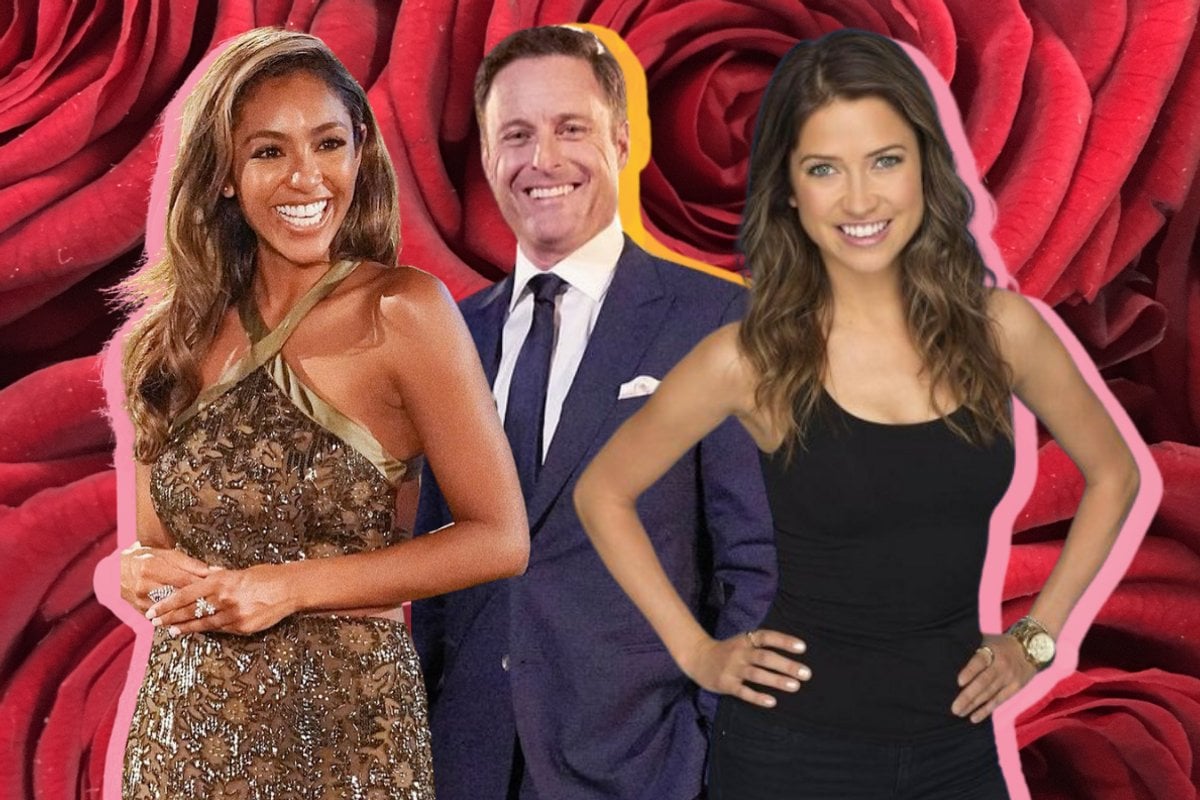 Last month, the US Bachelor franchise became engulfed in a racism scandal that saw longtime host Chris Harrison announce he would step aside for an indefinite period.

This season of The Bachelor featured their first ever male Black lead in Matt James, who had 32 women vying for his heart - 25 of whom identify as BIPOC (Black, Indigenous and people of colour). Among the contestants is Rachael Kirkconnell, who has a history of engaging in racist activities.

Here's what you need to know about how the racism scandal has unfolded.

How did the Bachelor controversy start?

The controversy centres around the allegedly racist past of Rachael Kirkconnell, who is one of the front-runners on Matt James' season of The Bachelor.

The video went viral, attracting millions of views, and prompted other people to allege Rachael of racist behaviour.

One video from @feministmama accused Rachael of having a history of "liking" racially-insensitive photos on social media and also wearing racist costumes.

Further, a photo surfaced of Kirkconnell attending an Antebellum-themed party in 2018.

What did Chris Harrison say?

Chris Harrison, who has been the host of the franchise since it began in 2002, discussed the controversy during an interview with Rachel Lindsay, a former bachelorette who was also the franchise's first Black female lead in 2017.

"We all need to have a little grace, a little understanding, a little compassion," Harrison told Lindsay when asked about the controversy. "Because I have seen some stuff online — this judge jury, executioner thing — where people are just tearing this girl's life apart and diving into, like, her parents, her parents' voting record. It's unbelievably alarming to watch this. I haven't heard Rachael speak on this yet. And until I actually hear this woman have a chance to speak, who am I to say any of this?"

"I saw a picture of her at a sorority party five years ago and that's it," he continued.

"Well, the picture was from 2018 at an Old South antebellum party," Lindsay replied. "That's not a good look."

"It's not a good look ever," Lindsay said. "If I went to that party, what would I represent at that party?"

The public backlash was swift against Harrison, with many calling for him to resign for his defence of racism.

This is example #3487 that Chris Harrison really needs to learn the difference between ‘cancel culture’ and ‘accountability.’

That @TheRachLindsay interview with Chris Harrison 🥴

He said with an absolute straight face that no one knew in 2018 that plantation-themed parties were a problem. The fraternity in question banned these parties two years before Rachael Kirkconnell's chapter held one sooo... pic.twitter.com/vdVPr7QWUX

Both Chris Harrison and Rachael Kirkconnell, who is still a contestant on the pre-recorded series, later apologised for their actions.

In an announcement posted to Instagram, Harrison wrote: "I have spent the last few days listening to the pain my words have caused, and I am deeply remorseful. My ignorance did damage to my friends, colleagues and strangers alike... Now, just as I have taught my children to stand up, and to own their actions, I will do the same...

"By excusing historical racism, I defended it," the 49-year-old went on. "I am ashamed over how uninformed I am."

Harrison continued by referencing the fact that the current bachelor is the first Black male lead for the franchise.

"This historic season of The Bachelor should not be marred or overshadowed by my mistakes or diminished by my actions. To that end, I have consulted with Warner Bros. and ABC and will be stepping aside for a period of time and will not join for the After the Final Rose special.

"I want to ensure our cast and crew members, to my friends, colleagues and our fans: this is not just a moment, but a commitment to much greater understanding that I will actively make every day," he said.

Kirkconnell, 24, similarly admitted her wrongdoing and apologised for the offence caused by her actions.

"While there have been rumours circulating, there have also been truths that have come to light that I need to address. I hear you, and I’m here to say I was wrong,” she wrote in a statement shared to Instagram. “At one point, I didn’t recognise how offensive and racist my actions were, but that doesn’t excuse them. My age or when it happened does not excuse anything. They are not acceptable or okay in any sense. I was ignorant, but my ignorance was racist.

“Racial progress and unity are impossible without (white) accountability, and I deserve to be held accountable for my actions. I will never grow unless I recognise what I have done is wrong. I don’t think one apology means that I deserve your forgiveness, but rather I hope I can earn your forgiveness through my future actions.”

On Saturday, it was announced that Harrison will not be hosting the next season of The Bachelorette US and will be replaced by two former Bachelorettes Tayshia Adams and Kaitlyn Bristowe.

"We support Chris in the work that he is committed to doing. In his absence, former Bachelorettes Tayshia Adams and Kaitlyn Bristowe will support the new Bachelorette through next season," Warner Horizon and ABC Entertainment said in a statement.

"As we continue the dialogue around achieving greater equity and inclusion within The Bachelor franchise, we are dedicated to improving the BIPOC representation of our crew, including among the executive producer ranks. These are important steps in effecting fundamental change so that our franchise is a celebration of love that is reflective of our world."

Fans of the US Bachelor franchise, will no doubt remember Tayshia Adams, who was the second Bachelorette on season 16. Adams was brought in after Clare Crawley decided to leave the show after getting engaged to Dale Moss within two weeks.