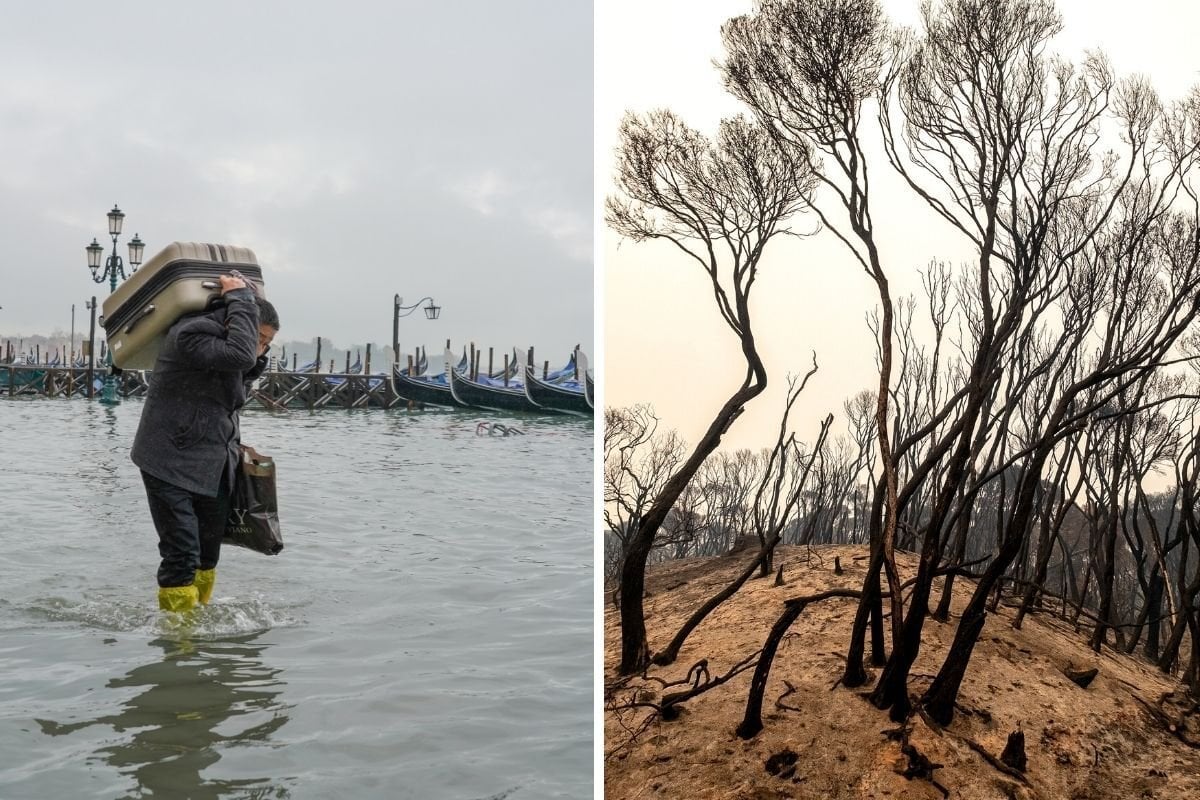 In 1928 an invention first produced in Germany quickly became commonplace across the world.

Chlorinated fluorocarbons (CFCs) were used in everything over the next few decades. Think things like polystyrene cups, refrigerators, and aerosol sprays.

Little did we know at the time, but those CFCs were burning a hole in the Earth's ozone layer. It wasn't until the 70s that we finally cottoned on.

You see, the ozone layer is like the Earth's sunscreen. It blocks about 99 percent of UV radiation.

So you know how it takes you a good 20 minutes to get a touch of pink in the sun? Yeah, we're talking sunburnt in seconds.

But it was worse than that.

In the 1970s, scientists realised that the ozone layer was being depleted by the growing use of chlorofluorocarbons (CFCs).

Thanks to the Montreal Protocol, the world phased out CFCs.

A team of experts simulated two worlds - one without the Protocol ⬇️ 🧵 pic.twitter.com/DBPQ0l5weE

The ozone's decline had humans looking down the barrel of a world crisis. We would have seen an increase in cancers, blindness, metabolic disorders and a decline in our immune systems and oceanic productivity. UV rays also affect plant growth, so it would have reduced our ability to grow food.

So in 1987, the nations of the world got together and decided to ban the production of CFCs, establishing the Montreal Protocol on ozone-depleting substances. It was the first international treaty to be signed by all countries of the world, and is considered the greatest environmental success story in the history of the United Nations. World leaders moved quickly and effectively. There was 50 years of damage to undo so this was by no means a quick fix, and the hole got bigger before it got smaller but it did start to get smaller. Now, it's tracking towards a full recovery.

The UN reports that with the current momentum the ozone layer will be completely healed as far as some regions of the planet are concerned, by the 2030s.

We did that. Humans did that.

We fixed a problem that felt unfixable. So now we need to do that again, but we have to move quickly.

The recent IPCC climate change report aptly described itself as a 'red code for humanity.' It warned that under the current emissions policies we would not be able to limit the life-altering effects of global warming to 1.5 degrees by 2050, as was hoped.

As the report outlined, even if Earth’s climate was stabilised soon, some of the changes already set in motion — such as continued sea-level rise — are irreversible over hundreds to thousands of years.

Watch: Remember this wake-up call? Yeah, we've had a few...post continues after video.

But all is not lost. There is an opportunity to dramatically limit the damage: reaching net-zero CO₂ emissions.

As Professor Lesley Hughes, Climate Council spokesperson and professor of biology at Macquarie University told Mamamia, we can learn from our success with the ozone layer.

"What we can learn is that listening to scientists and acting on their advice is key. In the case of the ozone layer, it only took about 18 months from the first publication on the impact of CFCs to spur credible international action.

"Obviously, the climate issue is more complex but, just like the ozone layer, we know what we need to do to solve the problem. Now we just need to get on with it — and fast," she explained.

We are just over 70 days away from the UN Climate Conference in Glasgow. The rest of the world — including our trading partners and strategic allies — are all accelerating action on climate change.

But as Professor Hughes tells Mamamia, "The Australian government is stuck in the mud refusing to embrace the opportunity to build a productive, clean, vibrant carbon-free economy and society."

Australia has, so far, only committed to cut emissions to 26–28 per cent below 2005 levels by 2030, with a vague promise to hit net-zero "as soon as possible" — a stance that has drawn criticism from environmental agencies.

But 'as soon as possible' isn't good enough. Not if we want to live on this Earth long term.

Yes it feels big and scary, and you might've noticed a resurgence in the below terrifying trajectory on your social media of late. It makes the whole situation feel impossible. Like we've already hit the end of the world.

Why isn't this front page news?

But as Professor Hughes reiterates, "[this] catastrophe is not inevitable."

"The first and most important step is moving the world away from polluting fossil fuels like coal, oil, and gas and getting emissions down this decade by making the switch to renewable energy. As one of the sunniest and windiest places on the planet, Australia can cash in on its renewable advantage and be a clean energy superpower," she said.

How can you, the individual, help us get there? With your vote. And by making your voice heard to your local MP.

On a smaller scale, you can also reuse, recycle, cut down on your meat intake and stop buying so much stuff — every bit counts.

But ultimately we need our government to come to the table.

"If the world listens to the science and acts, we could stabilise the temperature and start turning things around, Professor Hughes told Mamamia.

We've done it before — just look at the ozone layer.

Reply
Upvote
Wow, hello how are you doing?
D
daijobou 9 months ago

Reply
Upvote
2 upvotes
I’m not too sure on what the industry thought of CFCs getting phased out at the time, I was only young, I don’t remember it being an issue  - but I don’t think they had such a huge influence on politics and businesses as the coal industry has. I never remember a soon to be Prime Minister sitting smugly in parliament cradling a can of CFC gas in his lap.
News
General
Opinion
True Crime
Politics
Sport
Explainer
Entertainment
Celebrity
Reality TV
Movies
TV
Books
Rogue
Royal
Lifestyle
Beauty
Fashion
Weddings
Home
Wellness
Health
Fitness
Travel
Food
Parents
Before The Bump
Pregnancy
Baby
Kids
Teens
School
Parent Opinion
Work & Money
Money
Finance
Career
Lady Startup
Relationships
Sex
Dating
Separation
Friendship
Family
Real Life
Couples