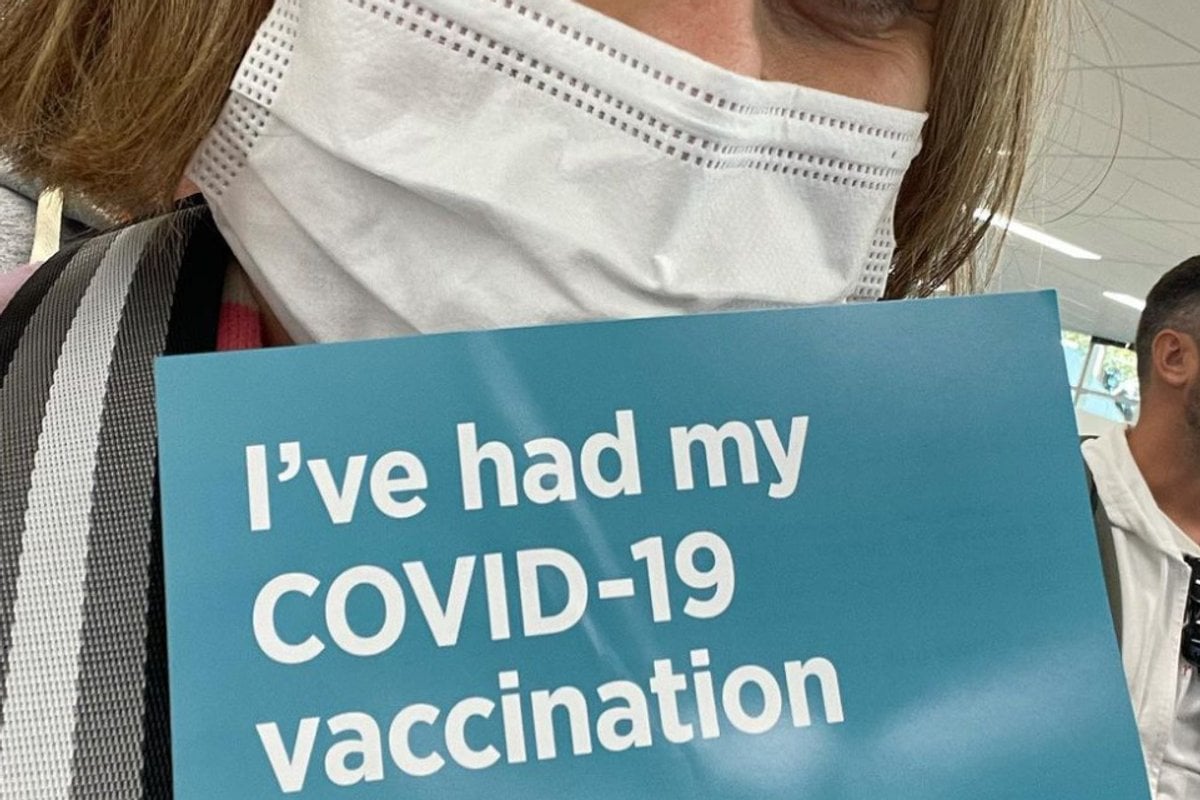 That was the message a well-known anti-vaxxer shared with their 22,000 Instagram followers, in response to a photo of a Mamamia staffer getting the COVID-19 vaccine.

In light of the call-to-action, hundreds of people sent abuse.

"The [anti-vaccine movement have] recruited a whole new army of supporters who are willfully spreading lies and misinformation on social media and influencing hundreds of thousands of people who may be on the fence about getting the COVID-19 vaccine," Mia Freedman said on Monday's No Filter podcast.

Whilst the onslaught of abuse almost led to the cancellation of the podcast episode on the COVID-19 vaccine, in which Freedman speaks to experts to address the concerns of those who are vaccine hesitant, it was published on Monday morning.

"There is too much at stake here," Freedman said.

During the episode, Freedman spoke to epidemiologist Professor Mary Louise McLaws about the common myths and concerns of the COVID-19 vaccines.

Has the COVID-19 vaccine been rushed?

Whilst the COVID-19 vaccines were developed with unprecedented speed, they were not rushed, Professor McLaws explains.

The epidemiologist says it usually takes five to 10 years to get participants who are the right gender and age group for vaccine trials, however this time there were hundreds of thousands of people who quickly put their hands up to be participants.

Professor McLaws said many participants were inspired by a sense of urgency after seeing death, sickness and overwhelmed health facilities in their countries.

"No corners have been cut with safety... Any trial that's been developed has been overseen by a group of experts in epidemiology for trials. That's a very specific type of epidemiologist. They won't let them cut corners...

"We know every single side effect that you could possibly get."

This is supported by Australian Health, who say: "No part of the process has been rushed, and there was no emergency authorisation granted."

Listen: The episode we were nearly harassed into cancelling. Post continues below.

How can you reassure people who are concerned about AstraZeneca?

The AstraZeneca vaccine, which is now available all people in Australia, has caused a small number of people to develop blood clots.

"People should be very pleased that the government has listened to their concerns and has reviewed the evidence and responded rapidly when they've seen an increase in risk with the first dose," Professor McLaws explained, referencing the fact that the recommendation changed from people over 50 to get the AstraZeneca to people over 60.

"It would appear as if the first dose is more risky than the second dose... Certainly for the second dose, [blood clots are] ten fold less likely to happen... So I would say to you, if you've had the first dose of AstraZeneca, you need both doses to be protected against any variant of concern or any wild strain.

"But if you leave it too long... then you're potentially wasting that first dose."

Professor McLaws also said that the small risk of the vaccine outweighs the larger risk of the disease, saying anyone over 70 has "an enormous risk of death if you catch COVID-19."

"Anyone over 60 represents 98 per cent of all deaths in Australia so far," Professor McLaws says. 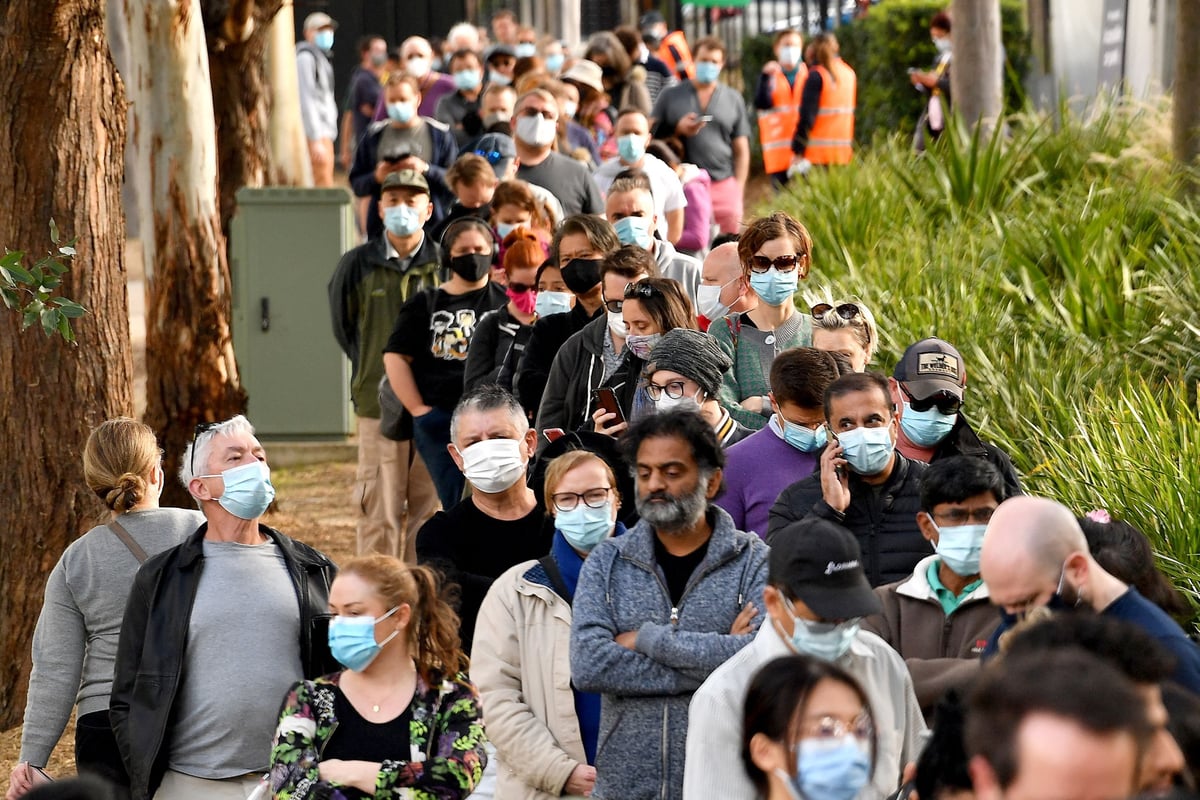 Sydneysiders queue outside a vaccination centre in Sydney on June 24, 2021. Image: Getty.

Does the vaccine impact your menstrual cycle?

"That side effect has never been reported," the epidemiologist said. "That's something that often happens to women anyway. It's a bit like whenever I wash my car, it rains. But it doesn't mean washing my car causes the rain."

Professor McLaws says it's just a coincidence if your menstrual cycle changes after the vaccine.

Can the vaccine cause infertility?

"There's no evidence that it gets into sperm or into any cells that make sperm or that make eggs," Professor McLaws explains. "It's improbable."

The Australian Government says "women who are trying to become pregnant do not need to delay vaccination".

Can you put a microchip into a vaccine?

"No, because every time you draw up an amount of the vaccine, you'd have to make sure that microchip was drawn up as well," the epidemiologist explains. "It couldn't possibly be, because then you'd have a lot of side effects to this foreign body."

What about pregnant women?

"Pregnant women have been vaccinated in Israel without a problem with Pfizer," Professor McLaws explains.

"Mostly you will talk to your doctor about any medical issues that you have. But Israel decided they were more at risk of getting COVID than any potential risk from Pfizer."

The Australian Government also says the Pfizer vaccine is safe for pregnant women and breastfeeding women.

Reply
Upvote
3 upvotes
I really appreciated this podcast, and thank you, Mia, for not cancelling it. I noticed some AVs come out on Twitter last night after Scomo announced aged care workers would require the vaccine. One guy was really getting upset, and I saw someone tell him he should leave aged care if he felt that strongly about not taking the vaccine. He wasn't an aged care worker at all - just taking on the outrage on their behalf! Thanks again. Brilliant. (And I love Prof Mary Louise McLaws - she knows her stuff, and her voice is SO soothing!)
S
snorks 4 months ago

Reply
Upvote
@therealjg it's extremely common to be outraged on other peoples behalf.
M
mamamia-user-482898552 4 months ago

Reply
Upvote
5 upvotes
Meanwhile, to all of you who thought Victorians were the only people who should be in a hurry to get vaccinated "because we don't have any COVID where I live" - take note at how quickly things can change. How many states are locked down at the moment, on the back of "not having any COVID" recently? See where complacency gets you in a pandemic?
S
snorks 4 months ago

Reply
Upvote
1 upvotes
@mamamia-user-482898552 We haven't had a single case of Covid within about 400km from where I am.
Most people I know are getting the vaccinations (when they are able), including all the medical and aged care workers I know.
E
elishatraill 4 months ago

Reply
Upvote
1 upvotes
@mamamia-user-482898552 it’s such a different feeling being in an outbreak knowing my elderly parents are both fully vaccinated! I’ve only had one shot and only a few days ago, but last time I was so fearful for my parents. Science is amazing, I have so much respect for the people who developed these vaccines.