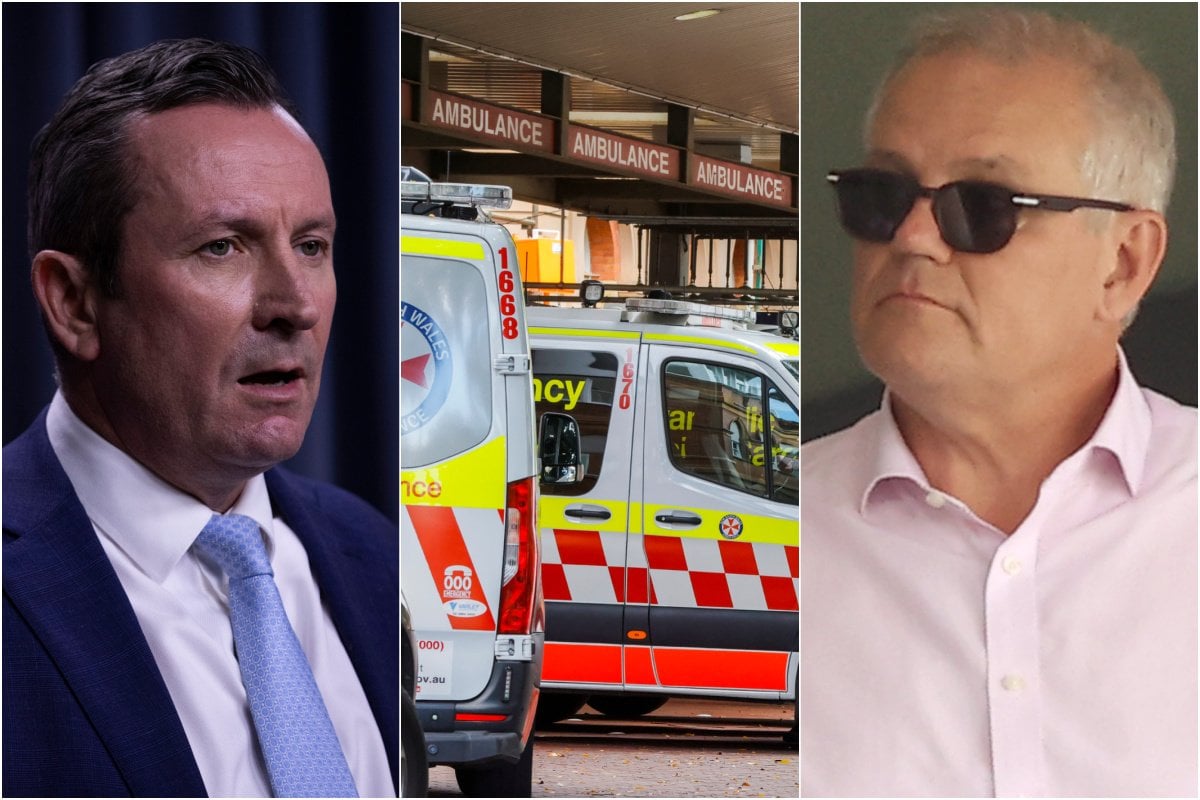 West Australians face being kept indefinitely within their own state after Premier Mark McGowan went back on his government's plan to reopen the state's borders next month.

He claimed it would be "reckless and irresponsible" to proceed with the planned February 5 reopening given the surge in Omicron COVID-19 cases across the country.

In light of what has occurred across the country, having closely assessed the situation over east and listening to the latest health advice, we have reworked WA’s Safe Transition Plan to fit the environment that now confronts us. pic.twitter.com/o7Qb2vRrMU

The premier had promised to reopen the borders once the state's double-dose vaccination rate reached 90 per cent. It is currently at 89 per cent.

More compassionate exemptions will be granted from February 5, when the borders had been due to be brought down.

McGowan says the health system is "strong and ready" but he'd like to see WA's third dose rate to get as high as 90 per cent.

It currently sits at 26 per cent.

As NSW nears a grim milestone, a leading epidemiologist has warned the state's plateauing case numbers won't be reflected in its death toll for some time.

There are "promising" signs the state is past the worst of the outbreak, Deakin University epidemiologist Catherine Bennett told AAP.

While case numbers are unlikely to drop rapidly, as you would expect with a peak, Prof Bennett says they seem to have plateaued  - with 30,825 positive results reported on Thursday.

Hospitalisations are no longer climbing rapidly either - dropping by 82 on Thursday to 2781 patients, the first fall since December 13.

Today is the first time hospitalisations have fallen since Dec 18, and it's a big fall pic.twitter.com/XsTiDMBc3s

However, the number of people becoming seriously ill, and dying, with the virus may not drop for weeks, she says.

NSW reported another 25 deaths on Thursday, and is likely to cross the 1000-death threshold on Friday.

ICU admissions also remain high, with 212 people being cared for, 68 on ventilators.

Students and teachers will have a clearer idea how schools will operate as states and territories unveil their COVID-safe plans in coming days.

The federal government has agreed to split the cost of surveillance testing for those states and territories wanting to roll out such a scheme.

But no consensus was reached at Thursday's national cabinet meeting on the best way of approaching the first term of 2022.

NSW and Victoria have vowed to keep on track with reopening as scheduled, while Queensland and South Australia have pushed back the start of school to allow more children to get vaccinated.

Tasmanian schools will return on February 9 with rapid antigen tests and masks provided to teachers, and the ACT is planning for a return to on-campus learning for the start of term one, but more details would be made available when the plans are finalised.

Scott Morrison has abandoned a proposal to allow 16-year-olds to drive forklifts after it was rejected by states and territories in Thursday's meeting.

As reported by The Guardian, the prime minister took the idea to the meeting as part of a package of measures to tackle staff shortages caused by Omicron.

Due to the dangers of operating a forklift, "high-risk work" licences are only available to those aged 18 and over in many states.

Morrison said that national cabinet had “agreed to proceed no further with the issue of 16-year-old forklift drivers”.

A woman has been released by police without charge after the body of a baby boy was found at a home in southern NSW.

Officers searched the house in Corowa near the Victorian border on Wednesday night after concerns were raised about the welfare of a three-month-old boy.

There they found the body of a child.

The body was located in a freezer wrapped in plastic, according to media reports.

Police have made a harrowing discovery: the body of a baby boy found inside a freezer at a home in Corowa, near Albury. @lanamurphy #9News pic.twitter.com/JKMLcnBP73

A 40-year-old woman was arrested and taken to Albury Police Station. She was released on Thursday morning.

A post-mortem examination will be held to determine the cause of death.

The home is now a crime scene and specialist forensic officers are examining it.

31yo man faces court for the murder of teacher Ashling Murphy.

The man charged with the murder of Irish primary teacher Ashling Murphy, who was killed on the banks of a canal in Tullamore while out for a jog, has appeared in court.

Jozef Puksa, 31, was brought before Tullamore District Court just before 8.15pm local time, and was heckled by an angry crowd of a few hundred people as an unmarked police car delivered him to the courthouse.

Jozef Puska, 31, of Lynally Grove in Tullamore, Co Offaly has appeared in court charged with the murder of Irish teacher Ashling Murphy. pic.twitter.com/F0HtlGU2Q1

He was taken into custody on Tuesday, after being discharged from hospital in Dublin where he had presented himself with injuries the day after 23-year-old Ashling was murdered.

The judge presiding over the case remanded Mr Puska in custody and he will appear again on 26 January.

There are no scenarios where any of this is okay. And yet it keeps happening. #shewasgoingforarun https://t.co/Rc64fRWbrG

- Nick Kyrgios is out of the Australian Open running after a second-round loss to title favourite Daniil Medvedev.

Medvedev had to deal with a hostile crowd in favour of the home player on Rod Laver Arena. He later told Eurosport, "It’s just a little disappointing when they are making so much noise between 1st and 2nd serve, I guess some people just have a low I.Q."

- Former Pope Benedict XVI failed to take action against clerics in four cases of alleged sexual abuse in his archdiocese when he was Archbishop of Munich, a report says.

Reply
Upvote
I've written it everywhere . Let Mark.McGowan do his job peacefully . He knows what he's doing.  Leave his family out of it . RESPECT this LEADER   . Everyone is in SAFE HANDS

Reply
Upvote
1 upvotes
As a west Australian who has supported Mark McGowans decisions every step of the way through this pandemic, I will admit to being shocked & a little mad last night. I really didn’t think he’d delay the opening. I stupidly thought he’d be announcing what life would look like for us once the borders open, how schools would cope, what our isolation rules would be, how we’d get our hands in RAT tests.
I haven’t seen my family in over 2 years because it’s always been too risky to leave the state or I just couldn’t leave the state.  And I was sort of ok with that. I didn’t get to be with mum after she had a heart attack, I’m yet to see my sisters first born baby, I didn’t get to go to my pops funeral but still, I supported the decisions made. But how long can this holding pattern go on? How many more times can we push the finishing line further out of reach?
I hear what was said last night in the press conference & rationally I understand all the reasons for keeping the hard border up longer. I have young kids who were only able to get their first vax this Monday, I want them to be safe as possible. My job is supporting vulnerable people in the community & I want them to be safe too. I want my older kids to get their boosters as soon as they’re eligible. But  there’s the other part of me that wants to move on &  to have the freedom to see my family as I want. This morning I’m still shocked at last nights announcements. It feels like I live on a different planet.
A
anon- 4 months ago

Reply
Upvote
I was about 80% sure that McGowan was not going to open borders on 5 February. As a West Aussie, I am personally glad to not be opening up yet, but I do feel for people who have been separated from family. Hopefully the expanded compassionate grounds for exemptions will help a little with that (but I know it's still pretty tough).
My support for delaying re-opening is on the proviso that we use the extra time to better prepare for re-opening when it does happen (since we have now had the benefit of seeing what has happened elsewhere)- eg getting ample RAT tests in stock, making sure we have testing centres that are appropriately resourced, transitioning people to N95 masks (personally I think all employers should be providing them free to all staff, rather than having staff use their personal cloth masks), getting all the kids vaxxed and making sure we have well thought out plans for dealing with outbreaks at schools etc.
A cynical part of me feels like a lot of the rest of the country (particularly politicians) will want to see WA fail when it does reopen, since it would reassure them that it never could have been any different for the other states. I don't know if we can achieve a different result to other states when we re-open, I just really hope that we can. And not because I think we are better than anyone else - we just get the benefit of hindsight from observing how Omicron has spread elsewhere, which the other states did not have when they re-opened.
S
sherriontour 4 months ago

Reply
Upvote
1 upvotes
@reannon my husband feels the same as you and he's angry. His parents have flights booked from the UK for 11th March to see us and their grandson. But when the next news story down says 25 died in one day in NSW and they are about to surpass 1000 virus deaths and approach a 'grim milestone', we have to realise that we've all been living in a paradise bubble in WA that will burst when the borders open. Mark McGowen, I believe, sees those numbers of deaths as actual people - mums, dads, brothers, sisters, sons, daughters. Not just numbers. This is not to mention all the businesses and livelihoods that people are losing in the eastern states. He's only asking that we hang on a little longer.

Reply
Upvote
@anon- stupidly I thought he wouldn’t back down. And I absolutely understand his reasoning for it all but have t we had 2 years to get ready?
I love living in such a safe place, one were the majority dies what’s right for the whole community but last night felt like the final straw. There is no end in sight now. What happens if a newer variant comes while we wait for everyone to get their booster? What happens if it’s decided that we all need 4 shots, not three? I’ve been supportive & patient for 2 years now. I’d just like to get in with living in this new world now.