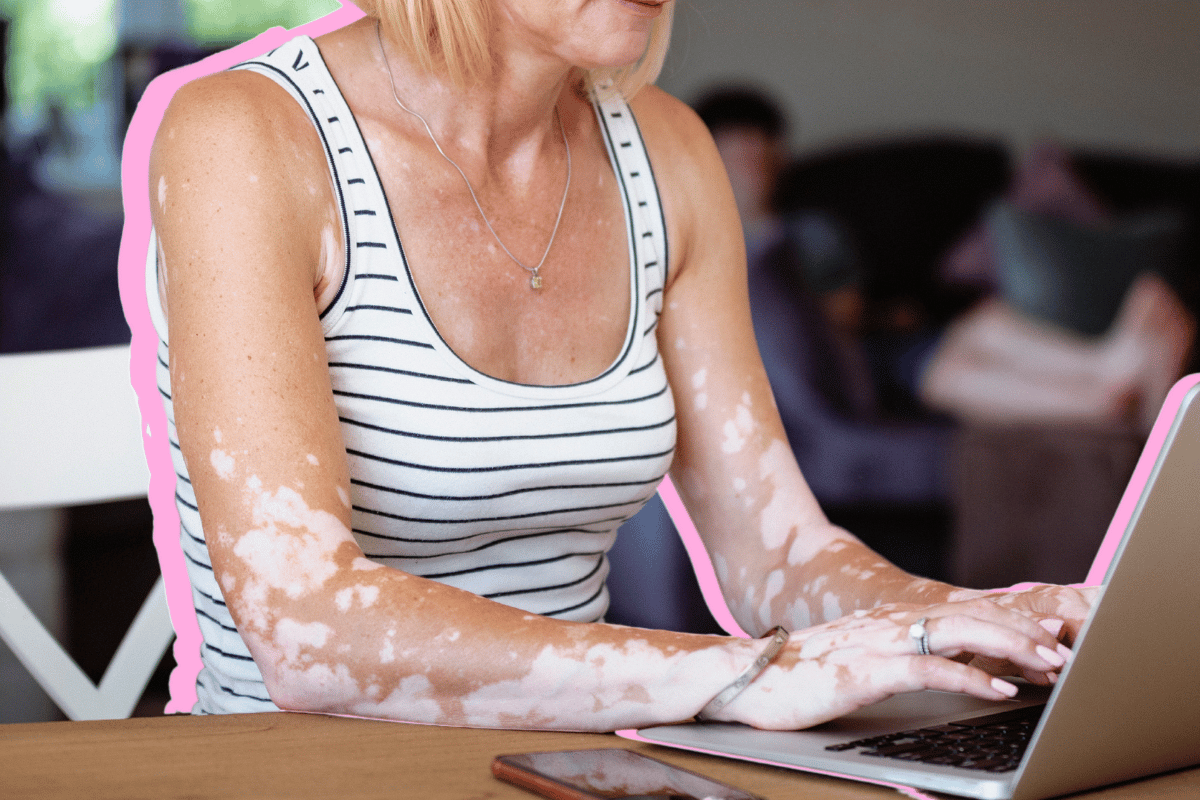 When Leisa Harrison was 10, she found a white patch on her legs. As the years progressed, the white patches began to spread, going across her arms, legs, back, torso and hands. She soon discovered she had vitiligo.

From the likes of Winnie Harlow, Michael Jackson and Aussie actress Pia Miranda, awareness surrounding vitiligo has started to increase. But over the years, Leisa has experienced awfully intrusive questions and comments from strangers:

'What happened to you?'

'What disease do you have?'

Leisa says to Mamamia: "Having open conversations is super important. But there is a right and a wrong way to go about the topic of vitiligo and any other skin condition."

So with this in mind, we unpack five things you should never say to someone with vitiligo.

Watch: What does kindness mean for you? Post continues below.

First and foremost, what is vitiligo?

Vitiligo affects up to 2 per cent of the world's population, including 300,000 Aussies.

But what is it exactly?

It's a skin condition in which the cells that make pigment (melanocytes) in our skin are destroyed. There's no physical pain or discomfort: just defined white patches that spread across various parts of the body.

As dermatologist Dr Phillip Artemi, Founder and Director of the Vitiligo Centre Australia explained to Mamamia, "Some 50 per cent of patients present before the age of 20, and 80 per cent before 30. But symptoms generally first appear in childhood."

Simply put, no it isn't. Given that it is an autoimmune disorder, vitiligo isn't infectious.

The fact that vitiligo is more common in family members of people with vitiligo means that genetics does play a role in the condition, but ultimately there is very little scientific understanding behind what causes it.

Leisa says: "One time I was at a restaurant and a fellow diner came up to me and asked 'what happened to you?' They were concerned about my arms."

Once the diner was told Leisa had vitiligo, they immediately took a step back, asking if it was contagious.

"If a child asked me this question, I wouldn't bat an eyelid," says Leisa. "But if an adult does, I can't help but feel a bit defensive." 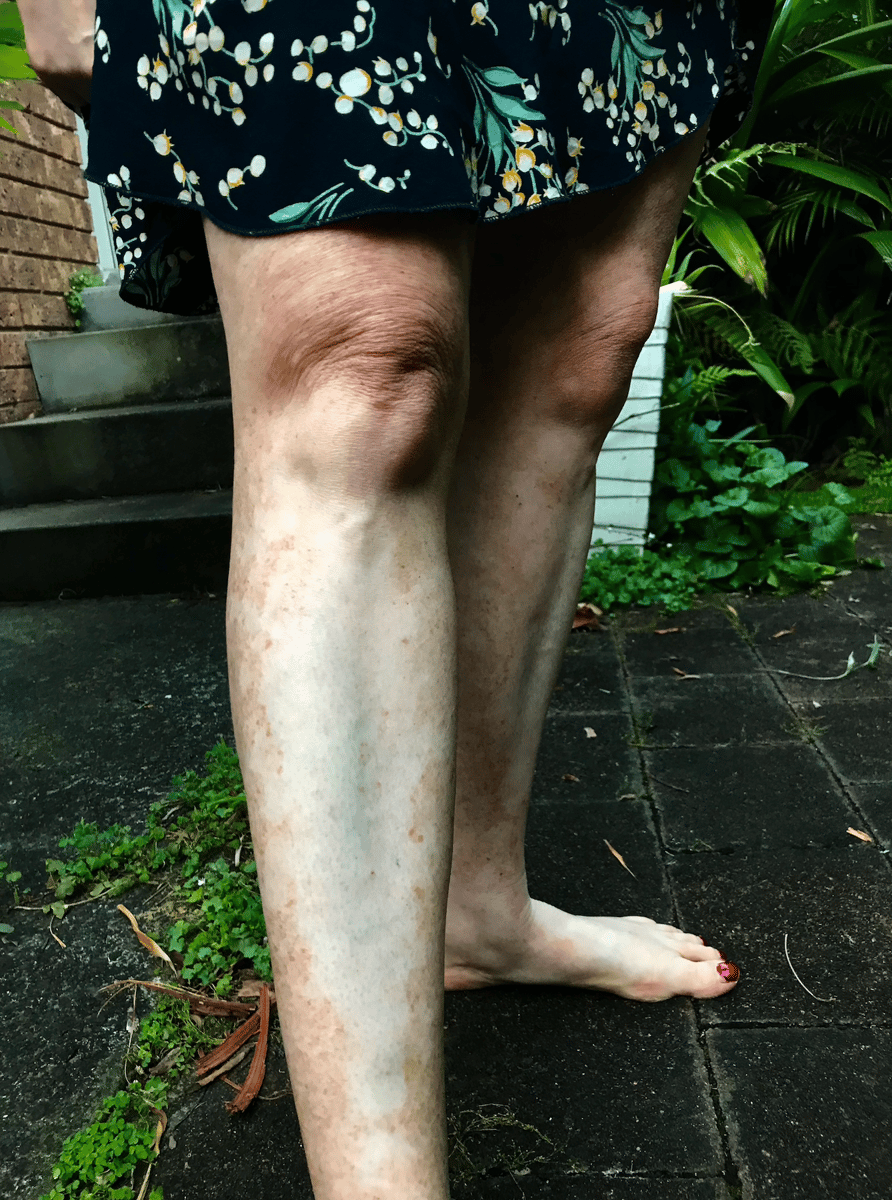 Image: Supplied. 'Have you found it hard to date?'

It was in her teens that one of Leisa's peers said to her: 'You better try and find a boyfriend before that gets worse'.

"As a teenager I was definitely self-conscious and used to refer to myself as a patchwork quilt," Leisa says to Mamamia. "And I was apprehensive whether 'anyone would love me', which sounds silly to say now."

"In my 50s I no longer try to cover it up. Rather, I feel more confident about myself: and frankly don't give a s**t anymore when random people oogle at my skin. But that self-love has come with time."

Listen to No Filter: The First Thing You Should Say To Carly Findlay Is Hello. Post continues after audio.

"I'll never forget the moment I was trying on a bra in a store when the shop assistant came into my dressing room and said, 'Oh you've had far too much sun! You need to start wearing sunscreen'," says Leisa. "She must have thought my skin had peeled due to the white patches."

Like every Aussie, Leisa is all for sun protection and is an avid user of sunscreen. Especially because she doesn't have any melanin in her skin's white patches, making those areas far more susceptible to sun damage.

"When that incident happened with the shop assistant, I didn't say much, only that I had a skin condition. But the look on her face, you could tell she was worried about her merchandise being ruined by my supposed peeling skin, which wasn't the case." 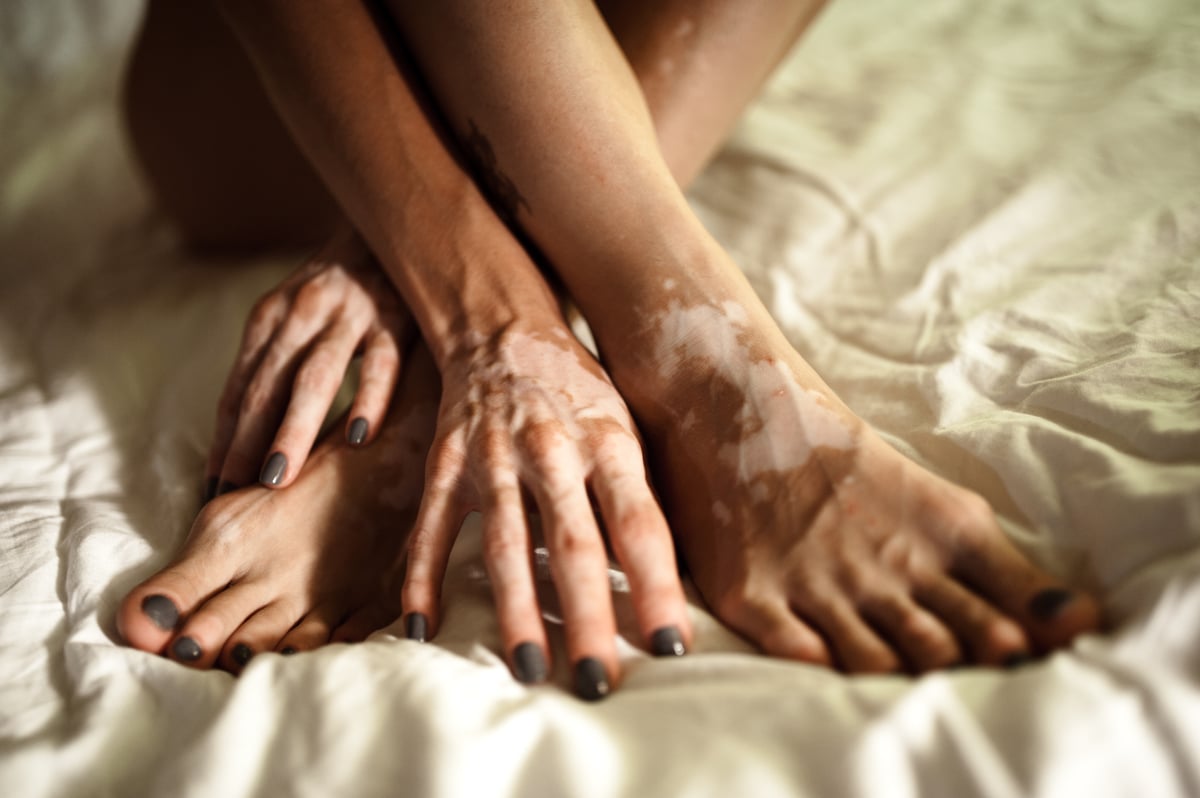 'You're lucky that you're fair-skinned.'

Statistically speaking, vitiligo is more commonly prevalent in people with darker skin. However, the skin condition doesn't discriminate, affecting people regardless of their race, gender or ethnicity.

Leisa is a white woman, who is relatively fair-skinned. When the conversation of her vitiligo has come up among strangers, some have remarked: 'you're lucky that you're white'.

"It's a really ignorant thing to say. I have friends who are South East Asian and have vitiligo, and for anyone that has the condition: it does not make them any less beautiful or discount who they are," Leisa shares.

"Thank goodness there is more diverse vitiligo representation these days."

There are some treatments associated with skin bleaching, but for the most part, there has been minimal research as to how to 'cure' vitiligo. For Leisa, it's something that has been with her since childhood and will continue for the rest of her life, which doesn't phase her any longer.

"She turned to me, screwed up her face and said: 'what is this?' At first I was pretty surprised she didn't know, as she has studied dermatology and various skin conditions her whole life."

As Leisa began to explain what vitiligo is, the dermatologist asked her: 'Will it ever go away? Are you stuck with it forever?'

"It's a pretty rude question especially from the perspective of a health professional. I understand it's a valid thing to wonder, and perhaps 'is it permanent?' would be a better alternative, rather than the negative connotation of 'stuck with it'," says Leisa.

So how should we approach the subject of vitiligo?

As with anything, intention is key, Leisa notes.

"I'm always happy to answer questions, as the more awareness that is created the better. But the one thing I hope people could take from this is to be kind, consider what you say and approach without judgement: it would mean the world to 10-year-old me." W
westernista a month ago