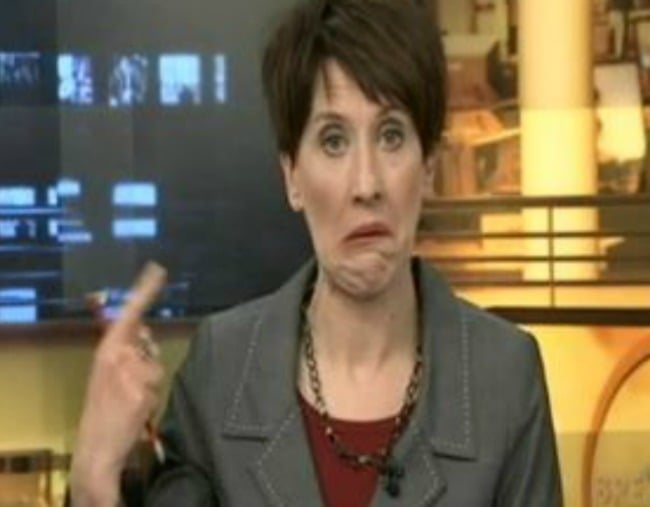 This post deals with pregnancy loss, which may be distressing for some readers. For support, please call Sands Australia on 1300 072 637 or visit the website.

ABC News Breakfast. October 19, 2009. A pre-recorded interview was rolling in which National Party Senator Barnaby Joyce attempted to weave his way to a point about Labor’s stance on the Emmissions Trading Scheme. As the final seconds of the package played, host Virginia Trioli raised her finger to her temple and twirled it.

The camera cut back, and caught it.

It was a split-second moment, but one that divided viewers after the footage spread online. To some, it was a hilarious moment of candour from a typically straight-laced program; to others, it was unprofessional mockery that showed disrespect for and bias against an elected representative.

But beyond the memes and the angry letters, to Trioli, that split-second moment will forever be tied to a personal tragedy – the loss of another chance at having a child.

Monique Bowley on what helped her after a miscarriage. (Post continues below.)


Speaking at the Women in Media conference on the Gold Coast, the experienced television journalist charted the fallout of the ‘finger twirl’. From the five seconds of heart-stopping “horror and shock” after the camera caught the gesture, to Senator Joyce’s gracious acceptance of her apology.

Within hours, she – the newsreader – had become the news.

“Oceans of social media outrage were boiling, and waves of abuse were pounding me,” she told the conference, according to a transcript from ABC.

“My bag slid from my shoulder and I stood in the middle of a room that seemed to have telescoped out to leave me alone and small at the centre of a vast and empty space, and I told my husband I thought I’d just killed a 20-year career in journalism,” she said. “And I cried.”

The day had begun, Trioli told the conference, on a high. She had undergone "what felt like my 100th IVF procedure and 85th embryo transfer", and it seemed this one had a chance. "It was transferred and I returned to work, technically pregnant and over the moon," she said, according to the ABC.

But two days after the on-air gaffe, she experienced pregnancy loss.

"Now — it is of course highly probable that this tiny precious embryo was never going to take — so many of them don't," she said.

"But to this day — and for all time — I will always believe that it was my own silliness, and all the drama that followed, that stole away one more hope for a child."

Nine years on, as the mother to a six-year-old boy, it seems Trioli has not shaken the self-blame that so many bereaved mothers experience.

But as Dr Devora Lieberman, a fertility expert who specialises in managing recurrent miscarriages and IVF, recently told Mamamia, it's crucial for us all to appreciate that there's no proven link between stress and miscarriage.