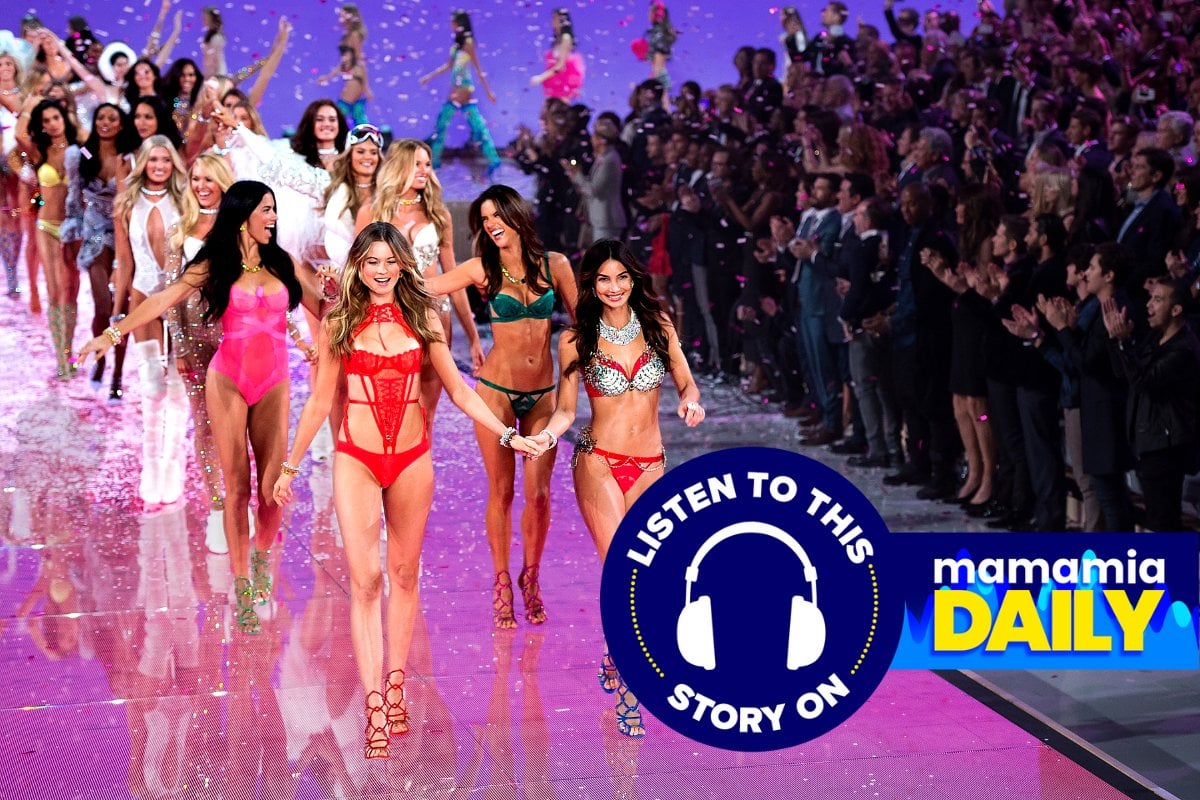 Listen to this story being read by Isabella Ross, here.

The dark underbelly of Victoria's Secret has once again been revealed in a new docuseries out this week.

Whether you watched the runway shows, bought the lingerie, or followed the cult 'Angels' on social media, chances are you encountered Victoria's Secret in one way or another. From the 1990s to 2018, the world's biggest lingerie brand would host a televised fashion show that often reinforced the standard of what 'sexy' looked like.

And it was completely unattainable.

But in the mid to late 2010s, things began to shift - allegations surfaced, a lack of diversity was called out, and the controversies piled up.

In the era of the #MeToo movement and inclusive brands like Aerie, ThirdLove and Rihanna's Savage X Fenty moving into the market and promoting the sex appeal of all body types, Victoria's Secret refused to adapt. And people noticed.

Sales dropped. Viewership plummeted. And the continual allegations of sexism, harassment and bullying arose. Victoria's Secret seemingly turned a blind eye to... all of it.

This is exactly what Victoria's Secret: Angels And Demons aimed to uncover.

So without further ado, here's what we've learned from the docuseries.

Billionaire Les Wexner was the CEO of Victoria's Secret from 1982 to 2020, and when he acquired the lingerie company, he transformed it into a multi-billion-dollar enterprise.

But in 2020, Wexner stepped down from the role following pressure from investors, after he came under scrutiny due to his relationship with late financier and convicted sex offender Jeffrey Epstein.

Wexner met Epstein sometime around 1986, according to Vanity Fair, and soon afterward, Wexner hired Epstein to be his personal money manager, as well as making him a trustee of his charitable foundation.

According to the docuseries, Epstein positioned himself as 'a model recruiter' for the lingerie brand in the mid-'90s.

Employees informed Wexner that Epstein was attempting to recruit lingerie models, which was against company policy. In 1997, Alicia Arden filed a police report alleging Epstein had lured her to a Santa Monica hotel room under those same false pretences.

Wexner claims he cut ties with Epstein in 2007, and the former CEO has not been accused of any criminal wrongdoing. But the damage to his reputation proved too big of a hurdle for the Victoria's Secret customer base to overcome. 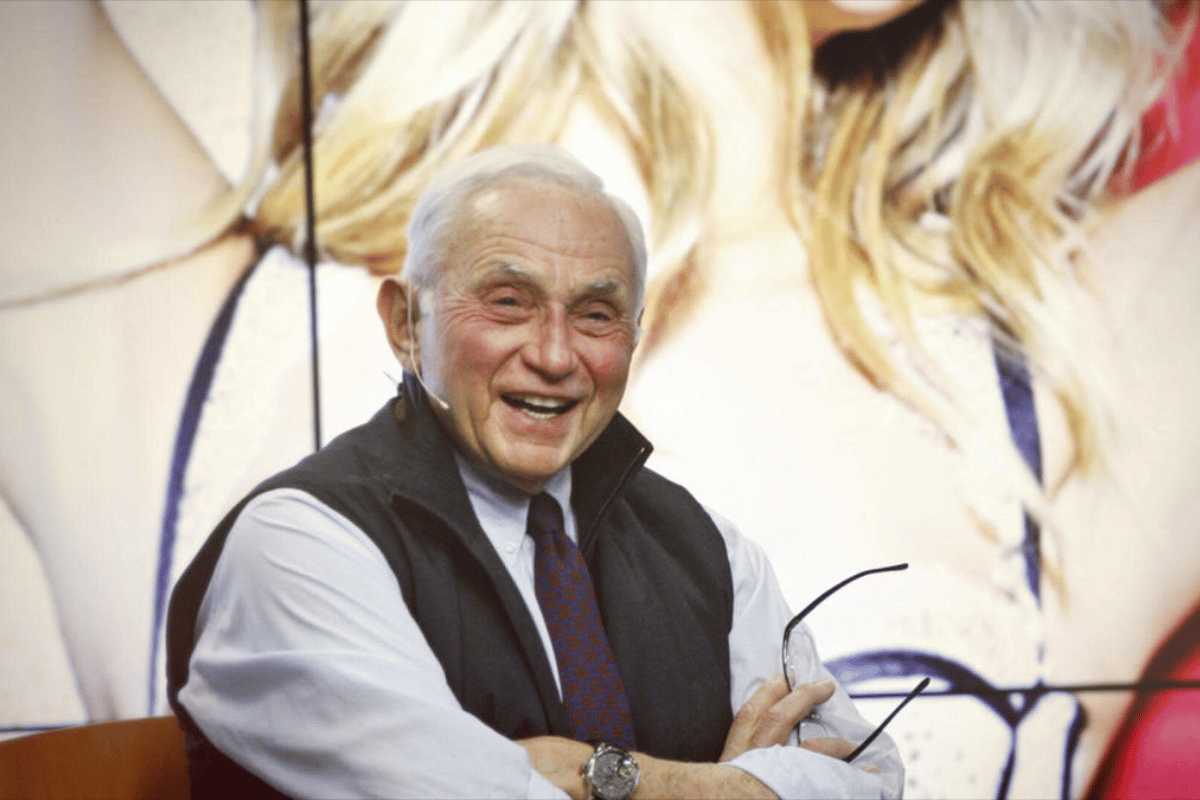 2. The strategy behind the brand was next level.

By the early '90s, Victoria's Secret had sky rocketed. It had become one of the largest lingerie retailers in America, with 350 stores and sales worth $1 billion.

In 1995, the iconic annual fashion show came about. The televised show was run by Ed Razek. He was responsible for hand-picking the models to walk the show, and is credited for launching the careers of supermodels such as Gisele Bündchen, Tyra Banks, and Heidi Klum.

Ivan Bart, president of IMG Models and IMG Fashion Properties, said in an interview with Time in 2018 that setting foot on the VS runway had become 'the dream'. Maja Chiesi, an IMG senior vice president said: "I don't think there's any other exposure on a runway that would probably ever compete with Victoria's Secret because you're on TV."

As archival footage from the docuseries noted, Tyra Banks herself said: "I told my model agency to call Victoria's Secret because it put models on the map."

And according to Victoria's Secret: Angels And Demons, this was a deliberate ploy from the business, as they were determined to "create a cult following".

By 2001, 12.4 million viewers watched as Heidi Klum walked the runway wearing a multimillion-dollar diamond-encrusted 'fantasy bra', which soon became the staple of each show.

When models signed a contract with Victoria's Secret, their lives became entwined completely with the business - it wasn't just a fashion show they were selling - it was their bodies, their looks, their lifestyle, products associated with the brand and more.

Plus, they were paid lucratively. If the models were given a significant amount of money, it would make everyone want to work for the brand - therefore creating major hype. 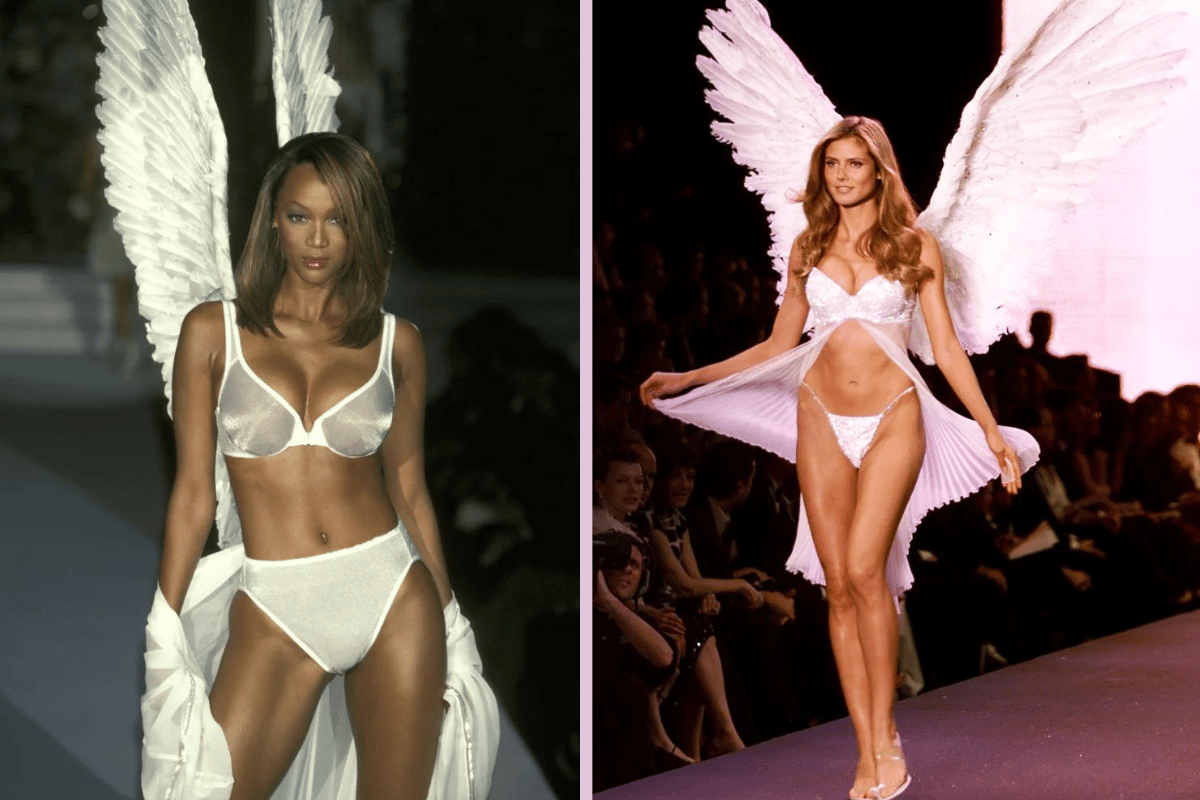 3. The allegations against Ed Razek and Victoria's Secret.

In 2020 an explosive exposé, 'Angels' in Hell: The Culture of Misogyny Inside Victoria's Secret, was published in the New York Times. The article revealed claims of sexism, harassment, and bullying by company ­executives and the brand's photographers.

At the crux of the complaints was Razek, who was accused by models of several unwanted advances, while at least two models said paedophile Epstein assaulted them.

One model said: "I had spent all of my savings getting Victoria's Secret lingerie to prepare for what I thought would be my audition. But instead, it seemed like a casting call for ­prostitution. I felt like I was in hell."

The exposé featured interviews with 30 current and former executives, employees, and models who all spoke of Razek's inappropriate behavior. Some alleged Razek asked them to sit on his lap, touched them inappropriately, and made suggestive and sexist comments about their bodies.

"There were talks, there were rumours. This was a perfect storm of problems. This was all a story that was meant to be hidden and stay hidden. And we were never supposed to see any of it," one person said in the docuseries.

4. One model felt uncomfortable with her outfit, as it she felt it was over-sexualisation aimed at kids.

In 2002, Victoria's Secret expanded its operations by opening a line specifically targeted toward younger tween to teenager women. The line was called PINK.

Swedish model Dorothea Barth Jörgensen recalled wearing a lingerie set that had a bunch of children's toys attached while walking in the 2012 Victoria's Secret Fashion Show. And speaking to the docuseries, she said she felt uncomfortable wearing the toys and lingerie, worried it would send the wrong message to young kids.

"I had this dress with toy things [all] around and the whole set was pretty much based on toys. My sister's children were so excited that I'd be going on the runway with Justin Bieber. They were so obsessed with him and they were like 10 and 12 at the time so I think definitely they hit the target," she reflected.

In the years following, the PINK line would be called out on numerous occasions. It took a massive hit in sales, as Victoria's Secret was called out for its over-sexualised ads aimed at teenagers. 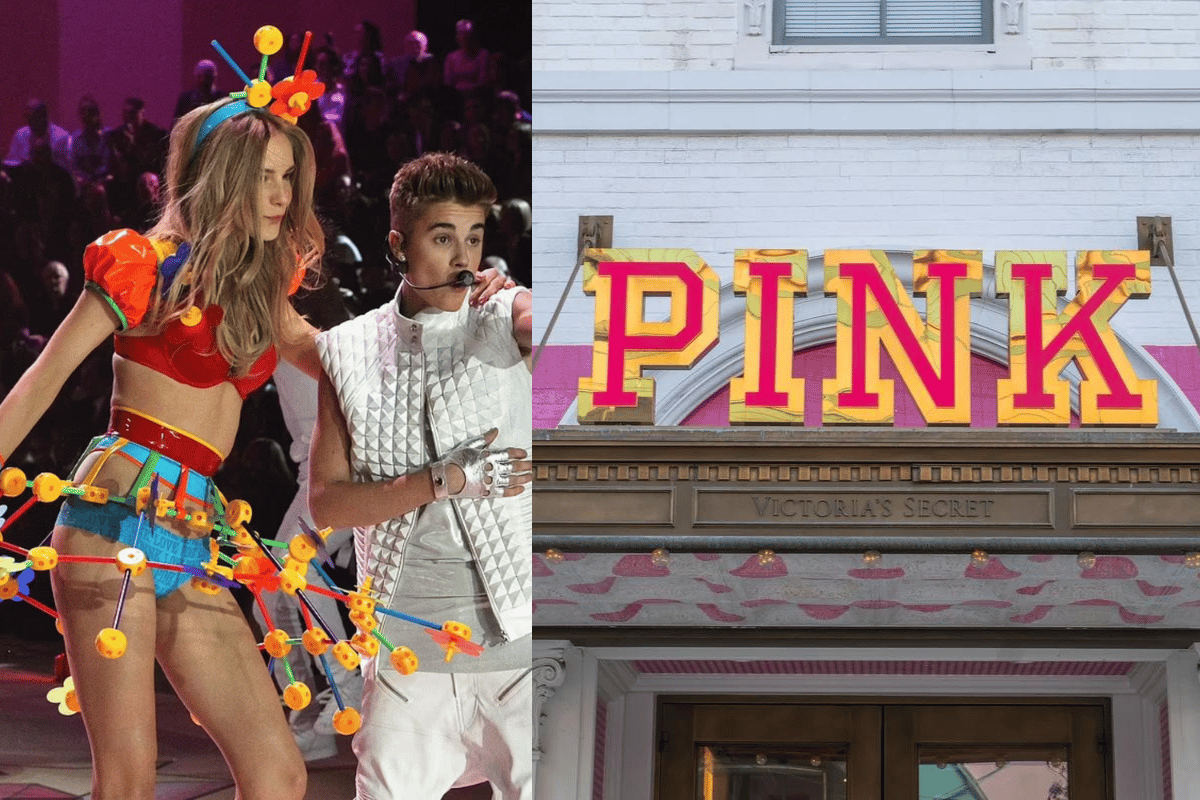 Perhaps the most integral marker of the downfall was the company's refusal to budge on their very sexist and outdated representations of women. It was an unrealistic standard that a new era of body positivity had quashed - but Victoria's Secret didn't reflect this new way of thinking.

In an interview with Vogue, Razek was asked about casting transgender models in the fashion show. Razek said he didn't think the show should feature "transsexuals" because the show is a "fantasy."

"It's a 42-minute entertainment special. That's what it is," he said.

Razek also said the brand had "looked at putting a plus-size model in the show" but always decided against it. The backlash was swift, and Razek resigned in 2019.

By 2019, The CFO of L Brands, Stuart Burgdoerfer, announced the televised fashion show was ending.

The company began to look like a "dinosaur," casting director James Scully said in the docuseries, as evidenced by the demise of its fashion show.

"Victoria's Secret lost connection with the customer. Things were falling apart. The world at large moved on from hyper sexualisation, and they didn't." 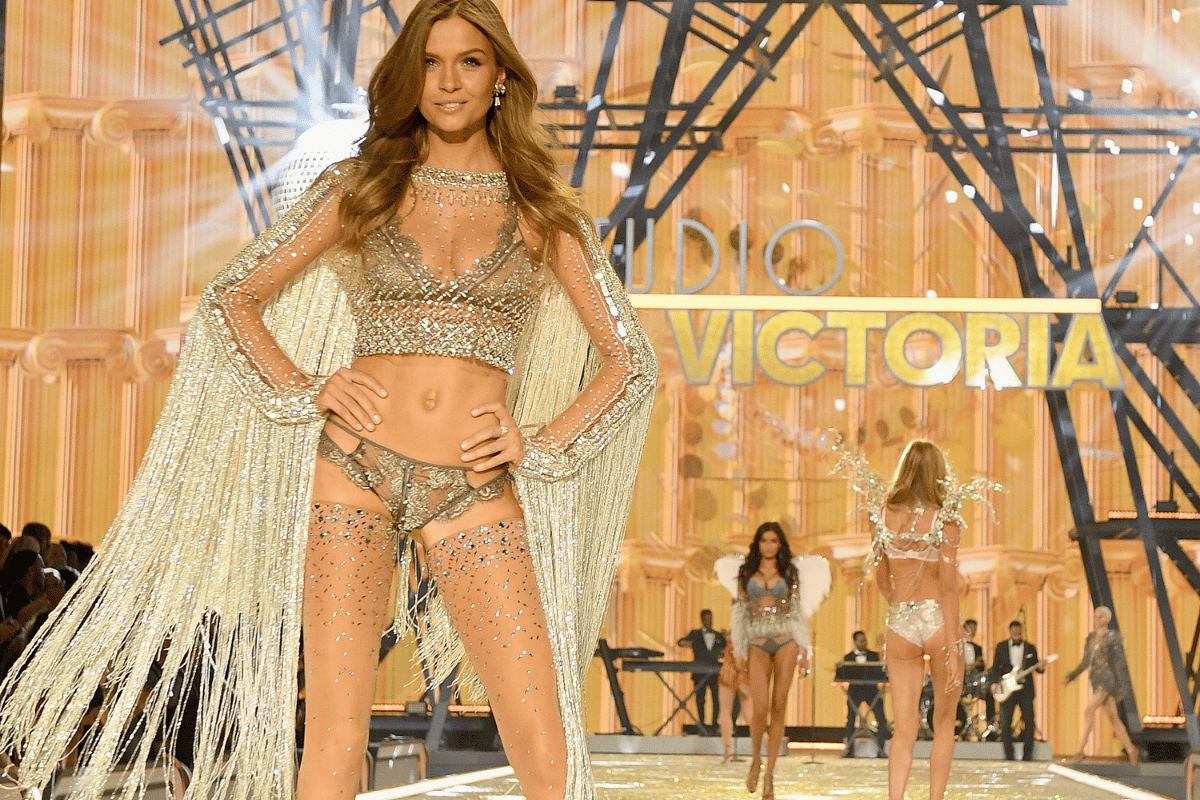 The director behind the docuseries Matt Tyrnauer, said it was the fact many Victoria's Secret models had rebelled against the brand on their social media that inspired him to look further into the business.

Australian models such as Robyn Lawley and Bridget Malcolm had voiced their concerns over the brand and the people behind it too.

"It seemed to me to be an example of yet another crack in the foundation of the top-down old fashion establishment, where the models, who used to be completely controlled by the brands, were biting," Tyrnauer told The Guardian.

"The more we examine that culture, which is basically a money and power and publicity culture, and the more that facade is stripped away, the better."

K
kbtrcw a month ago