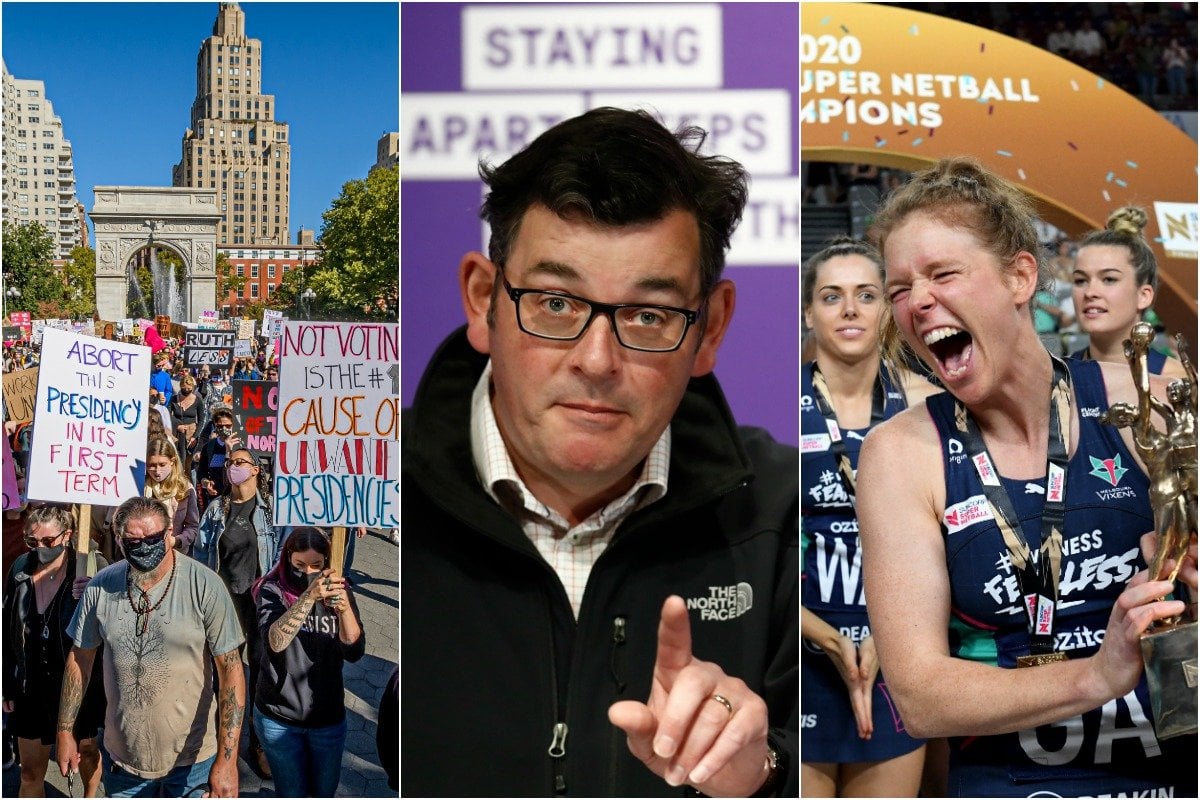 Victorians have woken to more freedom this morning after COVID-19 restrictions were eased but many are unhappy the hospitality and retail industries have been left out.

From Monday, Melburnians will be allowed to travel 25km from home and there will be no limit on time spent outdoors.

Outdoor gatherings will also increase from five people to 10 from two households, while facilities such as skate parks, golf courses and tennis courts will reopen.

Melburnians will also be able to get a haircut, see an allied health professional, renovate their home, wash their car and bid at an auction, though a number of strict safety protocols will be in place.

Daniel Andrews has announced a series of changes from midnight tonight, after Victoria recorded just two new cases of coronavirus on Sunday. Link in bio.

"I have announced today what is safe but will not undermine the sacrifice, the hard work, the pain, the amazing efforts that Victorians have put in," Mr Andrews told reporters on Sunday.

In regional Victoria, up to two people plus dependents will be allowed to visit homes once a day, while hospitality venues can increase their capacity to 70 people outside and 40 people inside.

The "ring of steel" that separates metropolitan Melbourne from regional Victoria will remain in place.

Melbourne will take another step on November 2, with hospitality venues be able to seat 50 people outside and 20 people inside, while retail and beauty and personal care services can resume.

Victoria recorded two new coronavirus cases on Sunday - its fifth consecutive day in the single digits - and no deaths.

Twenty-three people who recently travelled from New Zealand to Australia have arrived in Perth.

Health officials were advised by police of the arrivals on Saturday and say they have been taken into hotel quarantine for 14 days.

All travelled through Sydney and were identified as soon as they arrived at Perth Airport.

It was revealed on Friday that 55 people also took connecting flights to Melbourne.

The premiers of Western Australia and Victoria are fuming after almost 80 New Zealand travellers entered states not included in the travel bubble. #9Today pic.twitter.com/OdkQUKbG0B

Under the trans-Tasman travel bubble, anyone arriving from New Zealand is currently restricted to NSW and the Northern Territory.

WA Premier Mark McGowan said the situation was not ideal.

"We would prefer better management of these arrangements but this is something that happened that was outside of our control," he said.

"We were asked, 'Do you want to be in the bubble?' and we said no," Andrews told reporters on Sunday.

NSW has recorded just one new locally-transmitted case of COVID-19 on Sunday, with a coronavirus cluster in southwest Sydney's Oran Park growing to 19.

The state recorded five new virus cases in total in the 24 hours to 8pm on Saturday, with four in returned travellers in hotel quarantine. Almost 13,000 tests were performed.

NSW has reported 1 new case of locally transmitted #COVID19 in the 24 hours to 8pm last night.

4 cases in overseas travellers in hotel quarantine were also diagnosed, bringing the total number of cases in NSW to 4,149. pic.twitter.com/qQ2xbrSF1C

NSW Health said in a statement on Sunday the locally-acquired infection was connected to Great Beginnings childcare in Oran Park.

All staff and children who attended the centre between October 2 and Tuesday have been told to get tested and self-isolate for a fortnight.

NSW recorded seven new cases of COVID-19 - including five local cases - in the preceding 24 hours, with all locally-acquired cases connected to Oran Park.

A grand final eve pow-wow sharpened the Melbourne Vixens' focus before their pulsating 66-64 victory that handed them a third national netball league title.

After almost a century of days spent locked out of their home state due to COVID-19, the Vixens defeated the West Coast Fever at Brisbane's Nissan Arena on Sunday to secure the Super Netball championship and send retiring stars Caitlin Thwaites and Tegan Philip out in celebratory style. 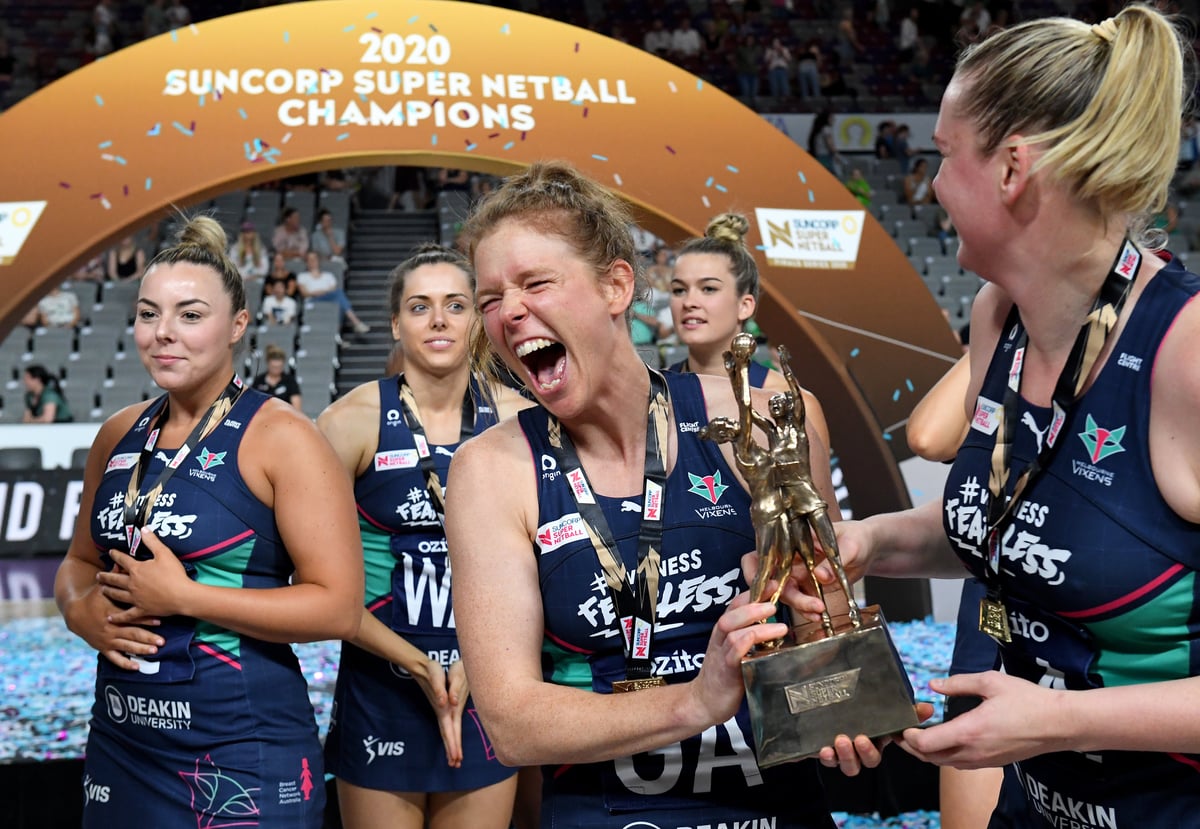 Tegan Philip of the Vixens celebrates victory after the 2020 Super Netball Grand Final match between the Melbourne Vixens and the West Coast Fever. Image: Bradley Kanaris/Getty.

With veterans Thwaites and Phillip signing off, and Victoria sweating on the outcome, the Vixens risked sending themselves into emotional overload in the decider.

But a team meeting on Saturday pulled the players even tighter together as coach Simone McKinnis demanded they concentrate only on themselves and what was an epic encounter.

"It was exhilaration, that moment when the game was over," McKinnis said. "And pride and relief and everything in between."

"This is something I've looked up to ever since I was a kid," Lachie Neale told reporters. "My dad can reel off the last 40 Brownlow medallists I think. He might have a tear in his eye (doing it now)."

Thank you for all your support, what a rollercoaster 2020. Not the result we wanted Saturday night but I can’t wait to get stuck into 2021 with my brothers. Extremely humbled once again to have received this award last night ❤️🦁

Lachie told reporters he was still wrapping his head around the idea of becoming a Brownlow medallist, joining a prestigious list that includes childhood hero and 1993 winner Gavin Wanganeen.

"People remember Brownlow medallists, what they achieve and whatnot. For me to be in that category, it doesn't really sit well," Neale said.

"Because I just admire so many players who have won them, they're greats of the game. It's incredibly humbling."

Thousands have marched to the US Supreme Court in Washington to commemorate the late Justice Ruth Bader Ginsburg and protest President Donald Trump's pick as her replacement.

The US Senate Judiciary Committee has scheduled an October 22 vote on the nomination of judge Amy Coney Barrett, over objections from Democrats that the confirmation process comes too close to the November 3 presidential election.

More than 26 million Americans have already cast their ballots for who they want to sit in the White House for the next four years, Trump or his Democratic rival Joe Biden. 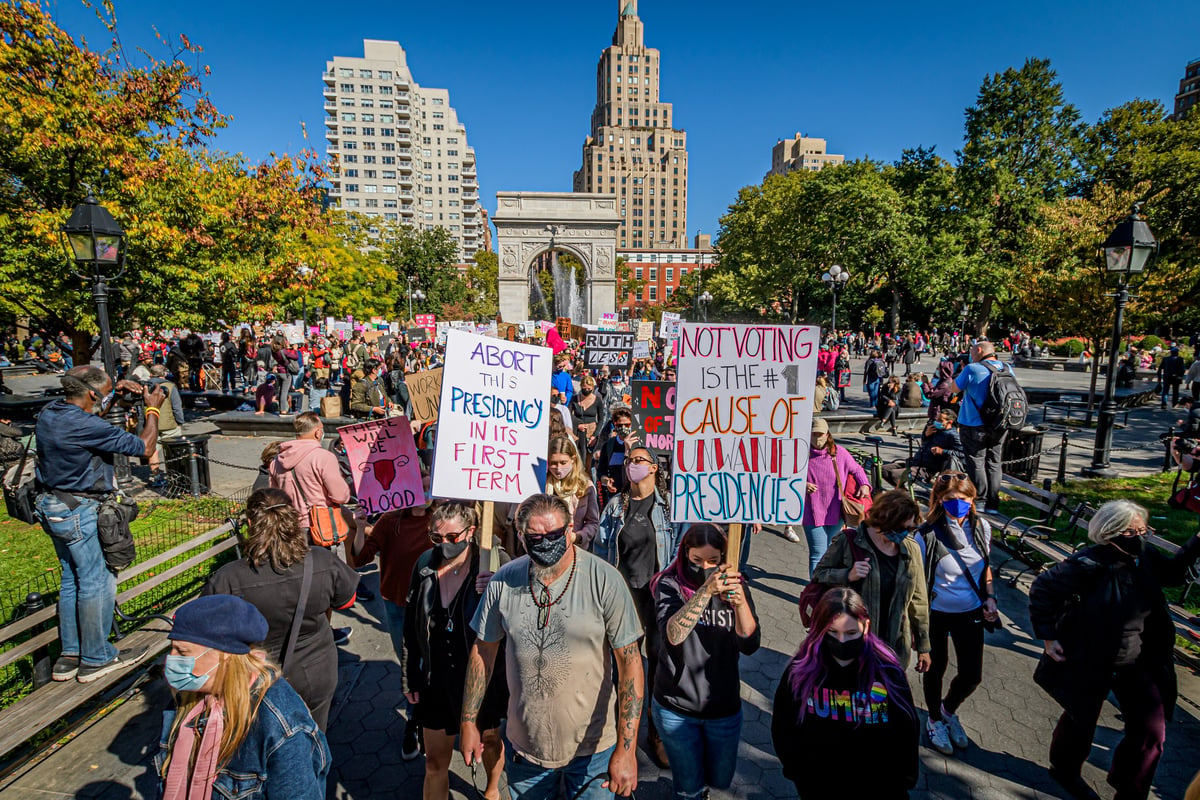 The immense crowd taking to the streets at The Women's March protest in NYC. Image: Erik McGregor/LightRocket via Getty.

Demonstrators at the Women's March said they were angry that Republicans appear ready to confirm Barrett's nomination so close to election day.

Republicans had refused to move forward Merrick Garland, the pick of former president Barack Obama, more than six months ahead of the 2016 election.

The protesters marched through downtown Washington to the Supreme Court steps.

Hundreds of marches and demonstrations were planned at city halls, parks and monuments across the country.

The streets of Paris and eight other French cities were deserted on Saturday night on the first day of the government-imposed 9pm curfew that is to last at least four weeks.

The measure was announced this week by French President Emmanuel Macron to curb the resurgent coronavirus as new daily infections peaked last week to more than 30,000.

Macron said the curfews were needed to stop hospitals from becoming overrun. 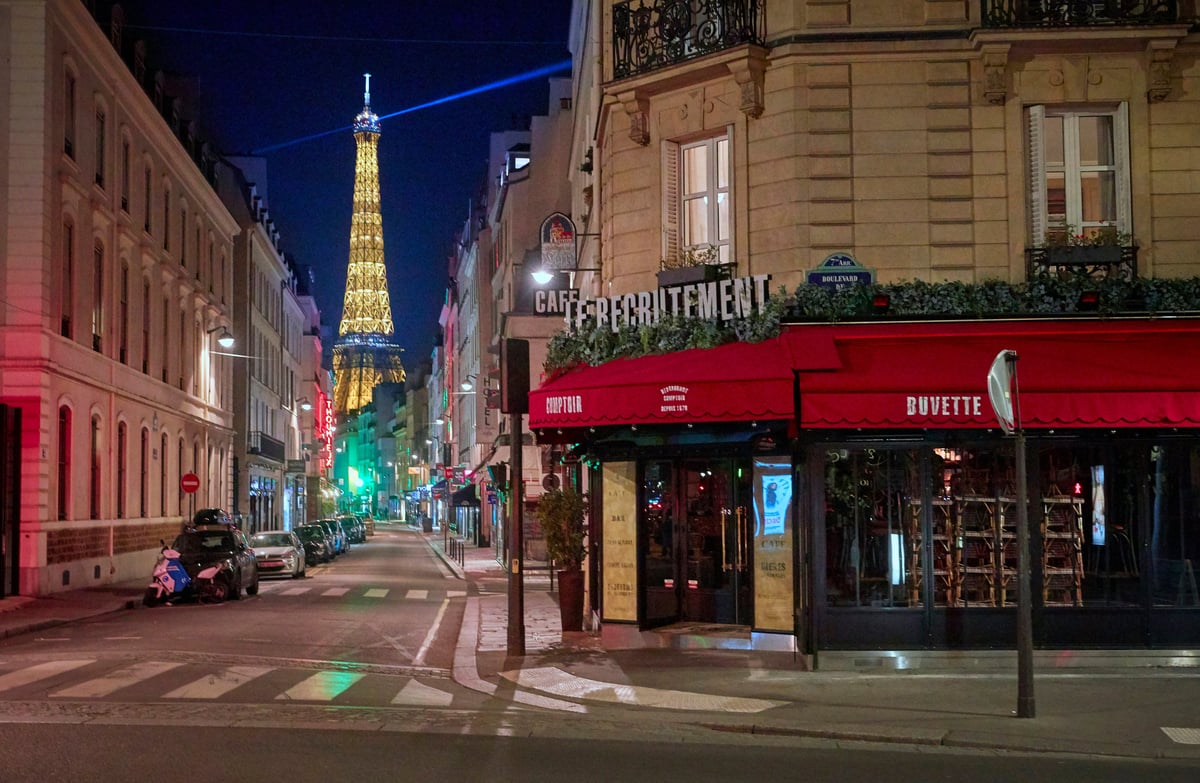 The streets in Paris are empty. Image: Kiran Ridley/Getty.

Many restaurant owners are up in arms about the move that is forcing them to close early, something they say will devastate the industry.

In France, nearly 20 million people are covered by the curfew and eerily deserted scenes were observed in Marseille, Lyon, Lille and Toulouse as well. The curfew runs until 6am daily.

France has seen more than 33,300 confirmed deaths in the pandemic, the fourth-highest death toll in Europe.

- New Zealand health officials are confident of having contained a new outbreak of COVID-19 after identifying the virus in a maritime worker.

- President Trump and his Democratic rival Joe Biden have gone on the offensive with each campaigning in states they believe they can flip their way before polling day.

- Italy has registered 11,705 new coronavirus cases, up from a previous record of 10,925 posted the day before.

- Armenia and Azerbaijan have accused eachother of violating a new "humanitarian ceasefire" in the disputed Nagorno-Karabakh region, hours after it came into effect.

Reply
Upvote
https://www.abc.net.au/news/2020-08-14/ruby-princess-coronavirus-inquiry-findings-handed-down/12557714
There was talk in the beginning re Border Force but the enquiry laid blame squarely on NSW health.
G
gypsy 2 years ago

Reply
Upvote
2 upvotes
I feel sooo sorry for Daniel Andrews he has worked so hard to save Victorians (often swimming against the tide). If his name was Gladys he would get federal support. MORRISON is obssessed with her, he seems to conveniently forget Ruby Princess and Newmarch debacles. MORRISON won’t cope with losing his princess, it’s only a matter of time.
G
guest2 2 years ago

Reply
Upvote
@gypsy working so hard to fix the problem he and his DHSS created.
C
cat 2 years ago

Reply
Upvote
1 upvotes
@gypsy to be fair, the Ruby Princess was a border force fuck up and Newmarch house is a federal care home. I think Scomo loves Gladys because she didn’t point that out to everyone.
G
gypsy 2 years ago

Reply
Upvote
@cat  I know that was implied early on but the enquiry found NSW health to blame. I put a link up the top you might like to read.
G
gypsy 2 years ago

Reply
Upvote
@guest2  The Victoria problem was created by stupidity of humans. The ones in quarantine breaking the rules and the men being paid to control the situation sleeping on the job in more ways than one. Andrews could no more be outside the motel rooms than Rudd could be in the rooves while pink batts were laid. If the people paid to do the job DID IT all would be well.
News
General
Opinion
True Crime
Politics
Sport
Explainer
Entertainment
Celebrity
Reality TV
Movies
TV
Books
Rogue
Royal
Lifestyle
Beauty
Fashion
Weddings
Home
Wellness
Health
Fitness
Travel
Food
Parents
Before The Bump
Pregnancy
Baby
Kids
Teens
School
Parent Opinion
Work & Money
Money
Finance
Career
Lady Startup
Relationships
Sex
Dating
Separation
Friendship
Family
Real Life
Couples