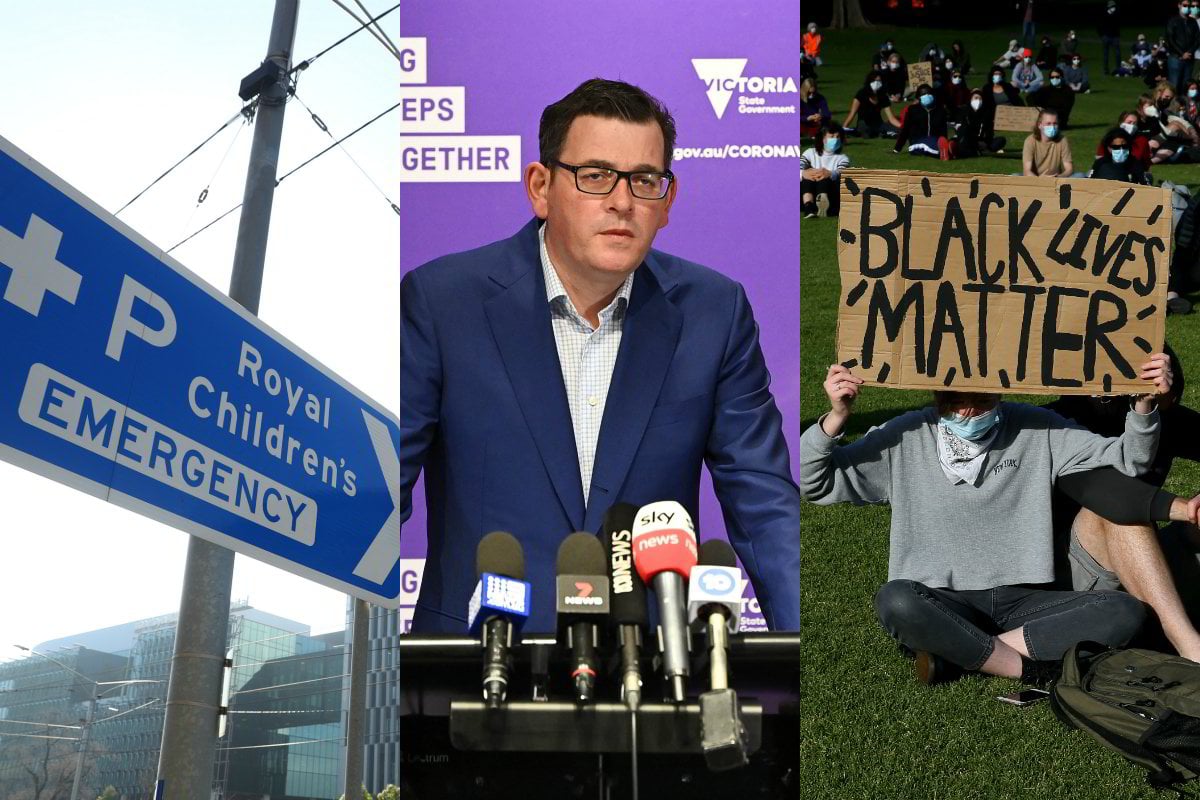 A NICU baby was among Victoria's new cases on Monday.

Victoria's second coronavirus wave could be close to its peak, but it may take months before case numbers return to single digits.

Modelling by health authorities suggests Monday's record 532 new cases, which included a baby in a neonatal intensive care unit, could mark the peak of the crisis.

But VicHealth chief executive Dr Sandro Demaio said cases are not expected to come down to single digits for "many, many weeks".

"The delay between taking measures and then seeing those hospitalisation numbers come down - that could take between two and even eight weeks," he told ABC, adding death rates could take even longer to lower.

The state recorded six deaths on Monday, five of which were linked to outbreaks at aged care facilities, with fears the outbreak will kill more residents in coming days.

There are now 84 cases linked to St Basil's Home for the Aged in Fawkner, 82 at Estia Health in Ardeer, 77 at Epping Gardens Aged Care, and 62 at Menarock Aged Care in Essendon.

Glendale Aged Care in Werribee has 53 cases linked to it, and 57 are associated with Kirkbrae Presbyterian Homes in Kilsyth.

If you have ANY symptoms:
1. Get tested quickly
2. Go DIRECTLY home
3. Stay home until you get your result
4. Access hardship $ if needed
5. Access further hardship $ if you need it to isolate safely

"In aged-care facilities you are dealing with the most vulnerable members of our community and that is where you see the most awful of the consequences of the COVID-19 pandemic," he said.

"That is where the loss of life, in particular, occurs, far more significantly than any other part of the community."

Premier Daniel Andrews said people who are going to work sick - including those who work at aged care facilities - are the "biggest driver" of the state's second wave.

He warned the state's six-week lockdown, which started on July 8, would not end until people stop going to work with symptoms.

Andrews even flagged the possibility some industries could be shut down.

Some 245 people are in hospital with the virus, including 44 in intensive care.

Among those in hospital is a baby, after an outbreak emerged in the neonatal intensive care unit at the Royal Children's Hospital.

The infant, two parents and a healthcare worker have tested positive for the virus.

All babies, staff and parents who have visited the ward since July 12 will be tested.

A worker at Mt Buller has also tested positive.

The team member became unwell last Thursday and left work to be tested and has remained in isolation since.

Two new cases of COVID-19 have forced the closure of a popular inner-city Sydney restaurant and two pubs, with anyone who attended the venues urged to immediately isolate.

NSW Health on Monday night confirmed a staff member at The Apollo in Potts Point tested positive for the virus.

They urged anyone who visited the Greek restaurant between Thursday July 23 and Saturday July 25 to self-isolate until 14 days after their visit.

The department is also encouraging anyone who lives in or has visited Potts Point in the past two weeks to get tested if they have any symptoms.

Meanwhile, a person who attended two pubs in Sydney's southwest while infectious has now tested positive.

NSW Health is urging staff and visitors to Mounties in Mount Prichard on July 24 and 25, and Prichard's Hotel in the same suburb on July 23, to isolate for 14 days and get tested if they have any symptoms.

NSW Premier Gladys Berejiklian told reporters the coming weeks were critical for managing the spread of the virus and urged the public to remain vigilant.

Seventeen new COVID-19 cases were confirmed across the state on Monday.

Four cases are linked to the funeral service cluster in Sydney's southwest, three are household contacts of cases associated with the Thai Rock restaurant in Wetherill Park, and two are under investigation. Eight are returned travellers in hotel quarantine.

There are now two cases linked to the Thai Rock at Potts Point, after a diner who visited the restaurant on July 17 tested positive last week. Anyone who attended the restaurant for more than two hours between July 15 and July 25 should get tested and self-isolate for 14 days since they were last there, regardless of symptoms.

Anyone who attended Tan Viet Noodle House between 1pm and 2pm on July 22, and An Restaurant in Bankstown between 9am and 11am on July 23, is asked to watch for symptoms and get tested if symptoms appear.

A two-year-old girl has allegedly been sexually assaulted at a play centre in Sydney's west.

Officers were called to the Lollipop's Playland and Cafe in Penrith just after midday yesterday after the toddler was found injured in a storeroom.

The girl's mother and staff members had been searching for her for about 20 minutes before she was discovered, distressed and crying.

Police were searching for the alleged perpetrator, examining CCTV footage and looking through the centre's COVID-19 registrar.

Detectives are appealing for anyone with any information, particularly those who were at the play centre yesterday and may have witnessed suspicious behaviour, to contact Crime Stoppers. 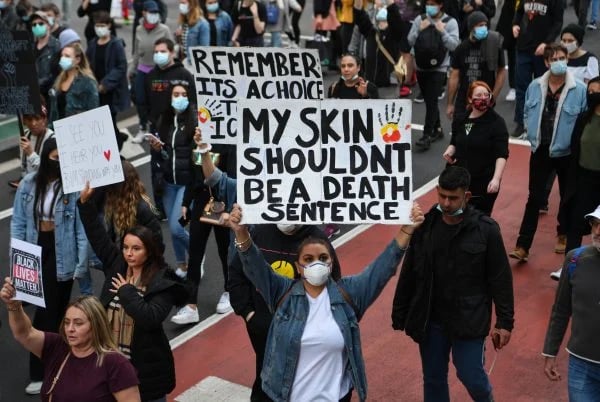 Organisers of a Sydney Black Lives Matter rally have asked supporters to gather in groups of fewer than 20 in The Domain after they failed to overturn a ruling their planned protest is prohibited.

"It's not illegal to have your lunch in a park in the city of Sydney still, even under the COVID-19 pandemic, if you keep your social distance and you don't gather in groups of 20," said organiser Paddy Gibson.

"Don't stick in a group of more than 20. Stand on your own, stand in a group that's smaller than 20 as you would if you went to the park on any given day and you can listen to the speeches for justice."

He was speaking after the NSW Court of Appeal on Monday dismissed a challenge which contended Justice Mark lerace did not have the authority to prohibit the rally.

The judge on Sunday accepted the police argument that the possibility of community transmission of COVID-19 arising from the CBD rally made Tuesday's planned event too risky.

Organisers previously said they planned to risk arrest and go ahead with the rally before delivering a petition signed by more than 90,000 people, calling for justice for Indigenous man David Dungay Jr, to state parliament.

The managing director of Bunnings has posted a public statement on Facebook after videos from an anti-masker taken in a Melbourne store went viral.

Mike Schneider said Bunnings has "put the welfare and care of our team and customers at the core of what we do" amid the coronavirus pandemic.

"As the community has seen from a couple of disappointing incidents over the weekend, our team are doing everything they can to help keep everyone safe in sometimes challenging circumstances.

"To be absolutely clear, we require that all customers wear a face mask or face covering if they visit a Bunnings store or Trade Centre in metropolitan Melbourne, or the Mitchell Shire. Exceptions will only be made for children aged under 12 and customers with valid medical reasons."

Wait til this Karen finds out about 'no shoes, no shirt, no service'. pic.twitter.com/2dvLE90dOa

Schneider wrote Bunnings would not tolerate abuse against team members and thanked "the vast majority of customers" for adhering to the mask rules advised by the state's Chief Health Officer.

On Monday, a series of videos from 'anti-maskers' went viral. One, posted online by Kerry Nash, showed her telling Bunnings staff she did not have to wear a face mask as it is her "right as a living woman to do whatever I want".

When a staff member tells Nash the mask is a condition of entry, she said it was "discrimination and I can have you sued personally for discriminating against me as a woman".

"That's your opinion of the law, that's not necessarily how it works in the state of Victoria." pic.twitter.com/mmV73KD246

On Monday, Nash put a warning up on her property warning trespassers would be prosecuted, after A Current Affair visited her home.

The NSW coastline is being pummeled by powerful surf as a low-pressure system unleashes wild weather that's resulted in flash flooding and dozens of rescues. | @alicemhogg pic.twitter.com/pXLVAIozN4

The damaging winds battering parts of the NSW south and central coasts are expected to ease within 24 hours.

The deep low pressure system lies off the Illawarra coast and is expected to remain slow moving on Monday, bringing damaging winds, rain and huge surf along the south parts of the coast.

The Bureau of Meteorology said multiple locations across NSW's south east recorded more than 100mm of rain in the 24 hours to 9am Monday, triggering flash flooding and SES rescues.

These extreme conditions are expected to gradually ease on Tuesday morning with sunshine expected to return on Wednesday.

- Europe is bracing for a second wave of COVID-19, as continuing outbreaks raise the possibility of reimposed restrictions at the same time millions of citizens are travelling across the continent for summer holidays. Belgium and the Spanish region of Catalonia have indicted 'complete lockdowns' may be coming if outbreaks are not brought under control.