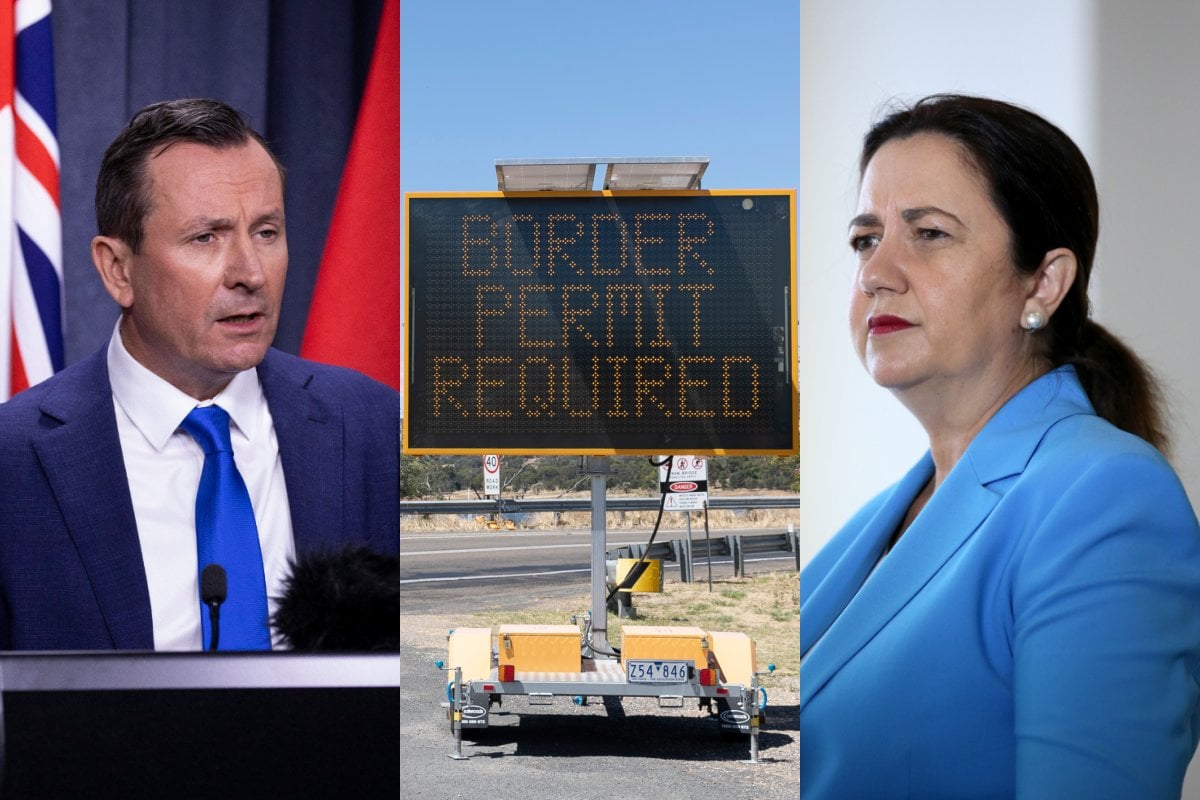 Two were reported yesterday, but included in today's numbers. This was the man who presented to Mt Druitt Hospital and a household contact.

One case was linked to the Berala cluster and two others, household contacts in the Northern Beaches, are under investigation.

There were 11 additional cases identified in hotel quarantine.

Eleven cases were also recorded in returned travellers, bringing the total number of COVID-19 cases in NSW since the beginning of the pandemic to 4,845 pic.twitter.com/Eg5fYSS5bA

NSW Premier Gladys Berejiklian said this shows the virus is still "bumbling along in the community".

Berejiklian said this was not good enough and residents needed to remember the outbreak was not over in NSW.

"It's so critical, so critical that we increase those testing levels. 14,700 is not really enough for where we're up to in the pandemic.

"Whilst all of us have been so vigilant and so good in getting those testing rates up, we need to maintain that again, to make sure we manage to get on top of the rumblings that are still there."

Health authorities on Monday evening issued an alert for Blacktown Workers Sports Club's Grange buffet restaurant, Campsie Superfresh and a number of venues at Warriewood on the Northern Beaches.

A pool shop in Brookvale, a Warriewood pharmacy, a post office in Hurlstone Park and a patisserie in Ashfield have also been added to the lengthy list of hotspots in Sydney.

Dr McAnulty said it was important for NSW residents to check the NSW Health website regularly for updated information about health alerts.

Queenslanders urged to get tested, one new local case recorded.

Queensland's Chief Health Officer has stressed the importance of getting tested if any COVID-19 symptoms are present after the partner of the hotel cleaner infected with the UK variant also tested positive.

The new case was confirmed by authorities on Monday night and there has been no change to the restrictions in place for Greater Brisbane following the lifting of the three-day lockdown.

Two additional cases were recorded on Tuesday, both returned travellers in hotel quarantine.

Dr Jeannette Young said the man has been in quarantine since January 7 and he became unwell that evening.

"Then he developed some extremely mild symptoms that evening.

"So the two days before he went into quarantine, potentially could be a risk. So I am asking people who went to any of the venues that he went to, to please, immediately come forward and get tested.

"The risk is low, but the risk is there. So I really ask you to come forward."

Greater Brisbane has been dealt a covid curveball just hours after the lockdown lifted, with one new case of the UK strain recorded in the community. @R_DAlessandro9 #9News pic.twitter.com/1T8VwOsYY5

She reiterated Monday's three venues too. Anyone who attended any of the below must come forward for testing:

"It's really, really important that anyone who has any symptoms anywhere in the state, no matter how mild, immediately comes forward and gets tested," Dr Young said.

Queensland has also dropped requirements for Victorians arriving in the state to get tested, unless they have symptoms.

Health authorities will remain on heightened alert during the 14-day virus incubation period and restrictions will remain in place in Greater Brisbane until at least January 22.

Masks are mandatory in supermarkets, shops, indoor markets, places of worship, libraries, gyms and indoor recreational facilities such as cinemas and art galleries.

They also must be worn on public transport, in taxis and rideshare vehicles and should be carried at all times.

Gatherings in private homes have been capped at 20 people and capacity is restricted at pubs, restaurants and cafes.

Victorians stuck in regional NSW had to wait a little bit longer to be granted permission to come home, as the launch of a new permit system was delayed.

The Victorian government expanded its "traffic light" scheme to the whole of Australia on Monday, designating regions as green, orange or red zones based on their coronavirus risk profile.

Yesterday there were 0 new locally acquired cases reported, and 0 new cases in hotel quarantine. Thanks to all who were tested, 18,139 test results were received. #EveryTestHelps More later: https://t.co/lIUrl0ZEco #COVID19VicData pic.twitter.com/xaWL80D4BS

Despite the border changes coming into effect at 6pm, the permit system wasn't available on the Services Victoria website until about 8.55pm.

Service Vic said in a statement that its staff and DHHS worked as quickly as possible to get the permit system up and running as they worked to draft directions but "experienced some technical issues".

Based on current health advice, here are the different zones: https://t.co/YpnCxdbMEp#COVID19Vic

Apart from Victorian-NSW border community residents, anyone arriving into Victoria from 6pm without a permit faced a $4957 fine.

The new system allows Victorians left stranded in regional NSW to return, but the state still remains off-limits for those in Greater Sydney and Greater Brisbane.

Premier Daniel Andrews says the permit system will remain in place for as long as the state of emergency lasts, with Victorians embarking on interstate travel told to be aware their plans could change.

It comes as Victoria marked its sixth consecutive day with no new local or interstate cases on Tuesday.

The Northern Territory and ACT have given a green light for residents to return from Greater Brisbane, lifting quarantine requirements for people who had visited the city.

But Western Australia's Premier Mark McGowan is keeping his state's border closed to Queensland until authorities are certain there is no community spread of the virus.

Victoria has announced a traffic light system for anyone wanting to visit the state, with all areas of Australia colour-coded as either red, orange or green depending on risk of the virus.

McGowan makes no apology for his cautious handling of the situation.

"If we make a mistake and the virus comes in, well, then no-one will thank us. Everyone will say: 'Why did you do that'," he told reporters in Perth.

There remains no nationally consistent protocols on borders and hotspots.

WA Premier Mark McGowan is again making headlines this morning, taking a swipe at other states and their handling of covid outbreaks. #9News pic.twitter.com/jFGa7yqL4P

McGowan also blasted New South Wales' handling of the pandemic and Premier Gladys Berejiklian's calls for other states to be less sweeping in their border restrictions.

On Tuesday, NSW Premier Gladys Berejiklian said what NSW wanted to do was put the health of its citizens first, but also "considering other issues which impact our citizens".

"Generally speaking we always strive to maintain the level of normality... we have to be very thoughtful about how we live with COVID given it could be with us for longer than we would hope."

The World Health Organisation says it has been notified by Japan of a new variant of the coronavirus discovered there.

Japan's health ministry said on Sunday it had detected a new coronavirus variant in four travellers from Brazil's Amazonas state.

The variant featured 12 mutations, including one also found in highly infections variants discovered in the United Kingdom and South Africa.

He adds: "Transmissibility of some variants of the virus appears to be increasing." #COVID19 pic.twitter.com/SOW2P14qpf

The previously identified variants from the UK and South Africa are more contagious but the behaviour of this new variant and the illness it causes are not yet known.

It comes as WHO's team of international experts tasked with investigating the origins of the COVID-19 pandemic are set to arrive in China on January 14, Chinese authorities say.

Lack of authorisation from officials in Beijing had delayed the arrival of the 10-strong team on a long-awaited mission to investigate early infections, in what China's foreign ministry called a "misunderstanding".

WHO chief Tedros Adhanom Ghebreyesus welcomed the news and said that studies would begin in the central city of Wuhan where the first human cases were identified.

China has been accused of a cover-up that delayed its initial response, allowing the virus to spread since it first emerged in the city of Wuhan late in 2019.

COVID herd immunity unlikely in 2021: WHO.

At a media briefing on Monday, Dr Soumya Swaminathan said it was critical countries and their populations maintain strict social distancing and other outbreak control measures for the foreseeable future.

In recent weeks, Britain, the US, France, Canada, Germany, Israel, the Netherlands and others have begun vaccinating millions of their citizens against the coronavirus.

"Even as vaccines start protecting the most vulnerable, we're not going to achieve any levels of population immunity or herd immunity in 2021," Swaminathan said.

"Even if it happens in a couple of pockets, in a few countries, it's not going to protect people across the world."

Scientists typically estimate that a vaccination rate of about 70 per cent is needed for herd immunity, where entire populations are protected against a disease. But some fear the extremely infectious nature of COVID-19 could require a significantly higher threshold.

Latest on worldwide spread of coronavirus.

- The United Kingdom is planning to ramp up its COVID-19 vaccination program to at least two million jabs a week.

- UK Prime Minister Boris Johnson says areas of the UK are experiencing shortages in oxygen as hospitals are at capacity.

- Pfizer's partner BioNTech has boosted its 2021 delivery target for its vaccine to two billion doses, up from 1.3b previously.

- Global cases have surpassed 90 million, according to a Reuters tally.