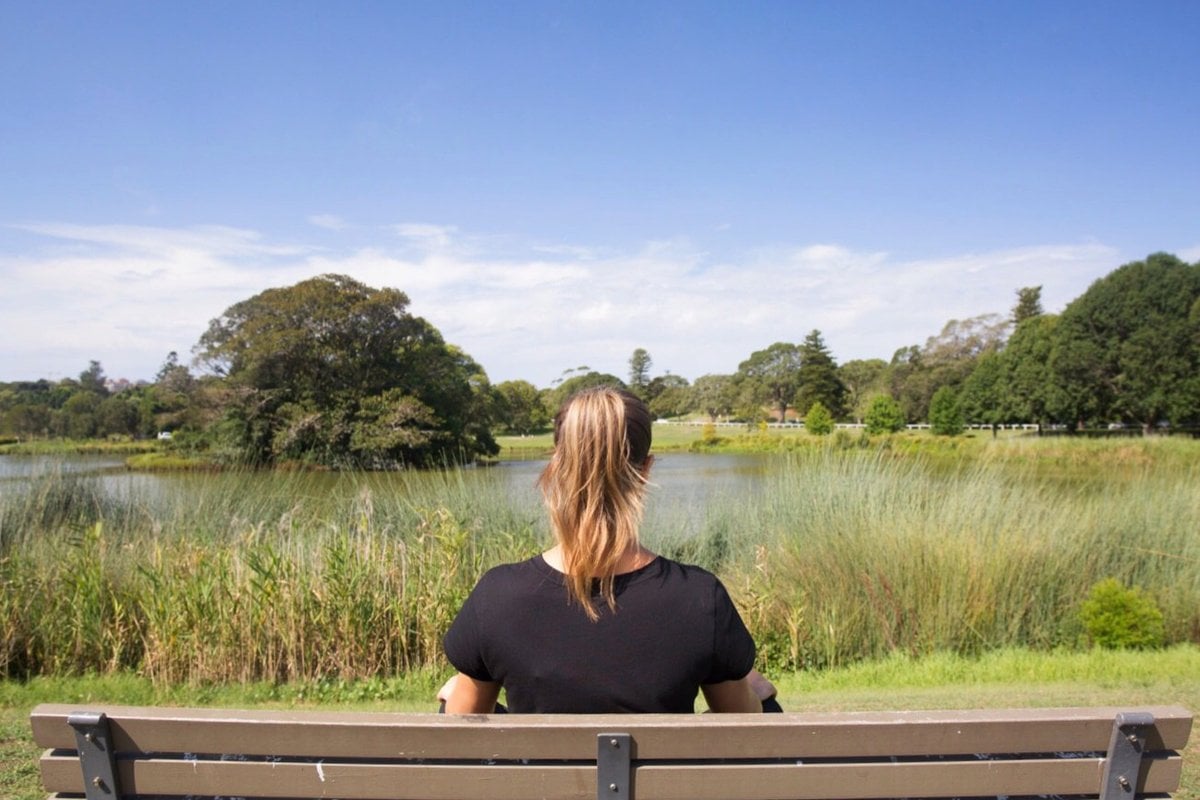 I walked down the hall past the bedroom door.

Slightly ajar, through the gap, I could see the bottom half of his legs stretched out on the bed. That’s all I needed to see to know things were bad. Really bad.

I continued to the kitchen, and shortly after heard him get up and make his way towards us. The man who rounded the corner was not the man I’d seen months earlier, but a ghost.

Even though I hadn’t physically touched the guy in 20 years, like they had minds of their own my arms flung out for a hug faster than I could control them.

Listen to Mamamia's No Filter. Each week, host Mia Freedman has fresh and original conversations with interesting people who have fascinating stories to share. Post continues below.

I felt compelled to shower him in... something. Compassion? Pity? Kindness? My body had more feelings than my brain knew what to do with. This was a man who had caused me incredible pain and impacted my relationships with men, my family and myself. But that doesn’t mean I wanted him to die.

I felt sad. Angry. More sad. More angry. But more than anything, I felt guilty. Had his behaviour been eating away at him and that’s why he’d ended up with cancer?

I had made some terrible comments about him over the years in an immature attempt to get over what he’d done, but I didn’t mean them. Had I somehow made this happen?

The more I tried to de-tangle, the knottier my feelings got.

I couldn’t reconcile how the man I’d feared for all these years could have been replaced with this frail, old man; a skeleton with a belt tied in a knot to keep his pants on his minuscule hips, cold sores exposing his run-down immune system’s losing battle and his formerly thick head of dark hair replaced with a few sparse white ones as the disease ravaged his body.

So, I did what many emotionally combusting people do when they feel icky – I cooked.

I used every pot in the house, ignored my children, and listened to music as I layered bolognese, bechamel and pasta over and over again.

My hands were on a mission that the rest of me had no choice but to stand by and witness. I wanted to cry and shout. Meat, sauce, pasta. I wanted to forgive and move on. Cheese, basil, salt.

I placed it in the oven and turned around to an almighty mess that had somehow appeared in the kitchen.

A few weeks later, as I navigated the complexities of knowing the end was near, I felt more conflicted than ever.

"It’s as though," I told my best friend breathlessly as I ran into Woollies to pick up groceries one day, "all these years I said I didn’t want an apology, and now I won’t get one – I suddenly feel like I do."

She told me she understood, yet unless you’ve lived it, it’s impossible to understand.

When someone takes something from you, especially someone you are supposed to trust, they do damage you are never quite able to fix.

You are forever changed, and when they remain in your lives – as so many perpetrators do – you never have the chance to heal and recover in the way you deserve.

On the day he died, I got the apology I needed. But it wasn’t from him – it was the people in the room with him.

"I am so sorry for what he did to you," they said over the phone – after having just said goodbye.

"Me too," I said, before hanging up and sobbing.

I cried for him because death is sad, for the people who loved him because loss is hard, and for the loss of what should have been a loving, respectful, treasured relationship, but wasn’t.

As for the lasagna, I don’t think it ever got eaten. But I suppose it was my way of saying sorry. Not because it was my fault, but because that’s a shitty thing to go through, no matter who you are or what you’ve done.

Casey Beros is the author of The 'Bad' Girl’s Guide To Better, Murdoch Books RRP $32.99. Available now in all good bookstores and online.