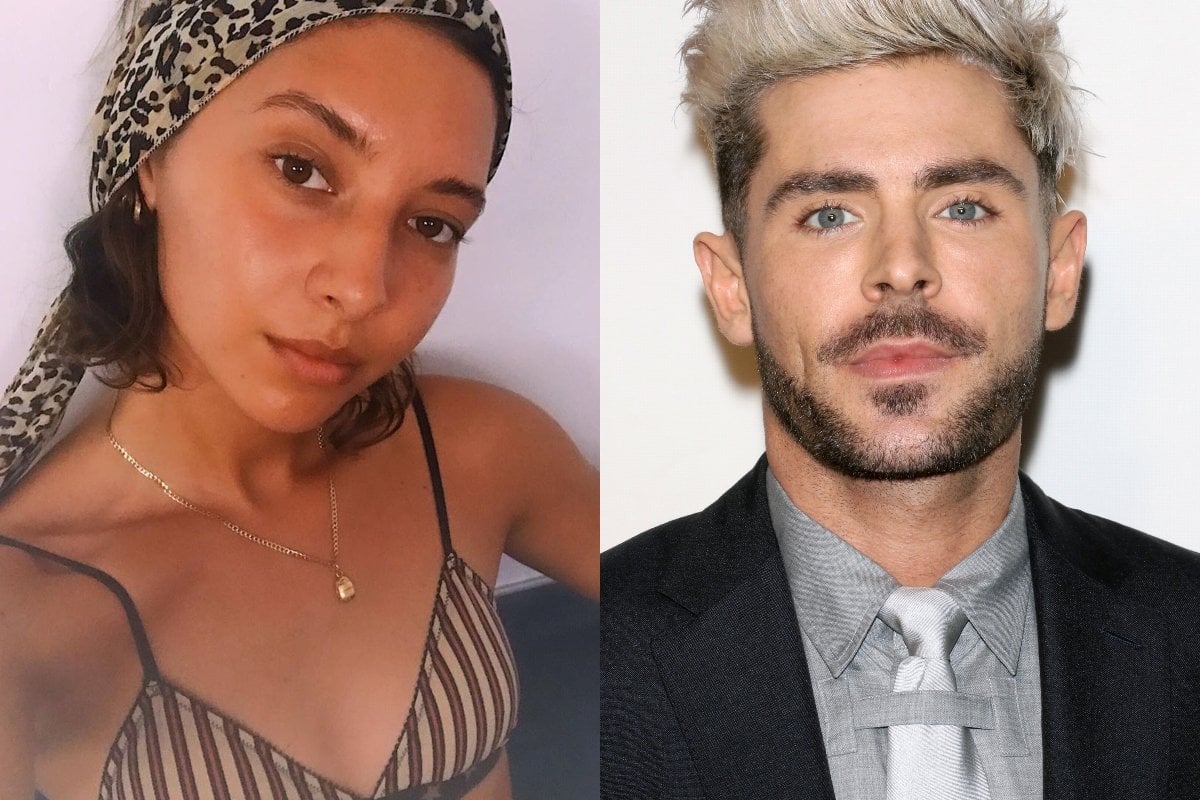 Zac Efron met his new Aussie girlfriend at the cafe where she worked and no, we swear this isn't fanfiction.

Efron, 33, has been living in Byron Bay for months now, riding out the coronavirus pandemic in the coastal town.

And in August he cancelled his scheduled flight back to the US, after his tourist visa was extended from three to 12 months, meaning he's likely to be sticking around for a while yet.

Mamamia talks to Zac Efron and Zendaya about filming The Greatest Showman. Post continues below video.

Efron just celebrated his birthday weekend in Byron with his girlfriend 25-year-old Vanessa Valladares, organising a party with a group of other famous faces.

The actor first met Valladares in July, while she was working as a waitress at the Byron Bay General Store, one of the town's most iconic cafes, and the pair have reportedly been seeing each other ever since.

Look, I'm a bit mad it wasn't... me, but I guess we can't all have Hollywood actors fall in love with us.

We've had a bit of a dig around, and this is what we know about Valladares.

Valladares' social media is fairly private, only giving a small insight into her life.

From Instagram, we can see she is quite spiritual, often captioning her photos with quotes, and she loves living by the ocean.

Valladares was working in hospitality when she met Efron, and we expect this storyline to be the basis of a romantic comedy very soon.

Despite her hospo gig, it appears Valladares' passion is modelling.

Her Instagram shows a number of professional photos and modelling shoots, including for brands like RVCA and Spell.

Find a hill, lay back and make some pictures from the clouds ☁⚡☁ 📷: @jxlom for @driftlab

Moments in the dust with my honey b 🌾🌾 📷 @mr_jamie_green

By the looks of it, she's also a fan of travelling (when that was a... thing), with posts on her account showing her in India, Indonesia and Uluru.

Packed away my things and was preparing to leave to Africa. My flight was scheduled to leave today, now we wake up to a rapidly changing reality everyday. Exciting! Embracing change I choose to surrender and continue to be love, observing, growing and expanding. I’m limiting my phone use, gaining knowledge, empowering myself, remaining present. 🤲🏽 Let us lean into these chaotic creative waters

A ski holiday and 'moving in' together.

After weeks of speculation that he was living in Byron during the COVID-19 pandemic, Efron was finally photographed on July 2 at the Byron Bay General Store.

In the photos, he hugged and kissed Valladares, who was working there, on the cheek, but at the time it was believed he was dating his Bad Neighbours co-star Halston Sage.

But he and Valladares have been photographed together multiple times since.

In early September, they were seen eating brunch in Lennox Head, south of Byron Bay after returning from a ski holiday in Thredbo.

At the time, The Daily Telegraph reported Valladares had quit her waitressing job and had been staying with Efron in Belongil, where he has been renting a beachfront property.

It is rumoured Efron is the mystery buyer of a huge $22 million mansion in Byron Bay.

TMZ has reported Efron was "burnt out living in and around Hollywood" and Byron Bay offered a quieter lifestyle.

He will have to return to the US eventually though, as it was recently announced he will star in the Disney+ remake of Three Men and a Baby, based on the classic 1987 comedy.

Efron turned 33 on October 18, and Valladares threw him a birthday bash in Byron.

Kyle Sandilands and his girlfriend Tegan Kynaston were among those to score invites to the birthday party.

Then, Kyle being Kyle, obviously shared some gossip on Monday's episode of The Kyle & Jackie O Show.

"She's lovely, couldn't get a lovelier, more sweet girl," he said about Valladares.

"She put the whole thing together, she's a sweetheart."

He also gave some details about the other guests, which totalled about 25-30 people.

"Everyone that you would think would be at that sort of place was there. I’m not going to go through every single person, but there were rockstars, movie stars, television stars – a very cool Byron sort of a crowd."

According to the Daily Telegraph, Hemsworth brothers Chris and Liam were on the invite list, and paps spotted their father Craig arriving alongside Aussie tennis great Pat Rafter.

Sandilands hinted that he foresaw his mate sticking around in Byron.

"He absolutely loves Australia, he's in love with this girl – Vanessa.

"They're lovely, beautiful couple, they do everything together, just very sweet and lovely."