When Vanessa Amorosi descended onto the main stage at the 2000 Sydney Olympic Games closing ceremony, lowered from the roof of ANZ Stadium in a silver geometric cage, the crowd went wild upon hearing the opening lines of ‘Absolutely Everybody’.

It was the same year iconic runner Cathy Freeman celebrated her history-making 400-metre sprint gold medal draped in an Australian flag, and Aussie music legends like Kylie Minogue, Midnight Oil, Jimmy Barnes and John Paul Young performed some of the biggest songs to come out of our country.

At just 17 years old, the Australian singer-songwriter had made it.

After being discovered at 15 singing in a Russian restaurant in Melbourne, Amorosi’s rise to pop stardom is the kind of story we just don’t hear about anymore.

Long before Instagram and YouTube, the Melbourne teenager was performing at shopping centres before releasing her first album The Power while still in high school. The debut album reached number one on the Australian album charts, earning her six ARIA nominations in 2000.

While her international counterparts – Britney Spears, Christina Aguilera, Jessica Simpson, S Club 7, to name a few – carved out their spots in the pop world with low-rise jeans and blonde hair, Amorsi was refreshingly different.

She was the fresh-faced teenager with burgundy coloured hair, her fringe, collard shirts and different coloured leather jackets quintessentially noughties.

Then, she just disappeared.

In Stellar magazine's Sunday edition, a now-35-year-old Amorosi has spoken for the first time about what life as a teenage music superstar is like, and the notoriously private life she's been living out of the spotlight for almost two decades.

“I’m not a sharer,” she told Stellar's Cameron Adams. “Even with my closest friends. So this is a new experience for me."

I am so honoured to be featured on the cover & inside of this Sunday’s @stellarmag. Thanks to their incredible team - I can’t wait to see the full issue!

She was once the inescapable face and voice of Australian music. Then @vanessaamorosi disappeared. In an exclusive interview, the notoriously private singer reveals where she's been all these years. Only in today's Stellar, inside The Sunday Telegraph and the Sunday Herald Sun.

If you haven't been paying close attention, you'd be forgiven for thinking Vanessa Amorosi had fallen off the face of the earth from her fast rise to fame after the year 2000.

But as Amorosi told Stellar, 2019 marks her second comeback to music after two career breaks; first from 2003 to 2007, and unofficially around 2011 until now.

Amorosi's always kept the deeper reasons behind her breaks from the music industry to herself, she told Stellar she was "pretty burnt out" and felt like she wasn't evolving as an artist. Her career has also been plagued by rumours about mismanagement - she was signed with pre-Australian Idol judge Marc Holden's label MarJac Productions before moving to Ralph Carr Management and Universal Music in 2006 - a subject she briefly addressed in a 2011 interview with the Sydney Morning Herald.

It's likely another factor contributing to Amorosi's long breaks in releasing music was the kind of music she wanted to release, which at a time when her peers performing hits about boys and romance, was much deeper in comparison.

Namely, one of her major singles from The Power album called 'Shine' co-written by Holden was a song originally titled 'Die'. The song was reportedly written after the death of a school friend by suicide, with the original lyrics reading “Everyone you see/everyone you know is gonna die," Amorosi told Stellar.

Holden convinced Amorosi to tweak the lyrics as he said "it might be a little bleak for radio," but she now says she probably wouldn't make the same decision today.

“That’s the difference between then and now. Back then, I rewrote things. Now I’d be like, ‘No, it needs to be heard.’ All the backing vocals in ‘Shine’ still say, ‘Don’t, don’t, don’t you do it.’ They still relate to the title being ‘Die’, not ‘Shine’. It doesn’t make sense,' she said.

Scrolling through Amorosi's Instagram page, it's near impossible to get any sense of the singer's personal life.

Nowhere on her feed filled with images from her many performances and behind-the-scenes tour moments, do we see her with her husband Rod Busby or their three-year-old son Killian.

Amorosi told Stellar she met her husband of two years "randomly" in a coffee shop after she moved to LA in 2011 to escape the Australian music industry.

“It was automatic. I want to marry you, I want to be with you. He’s all about fitness, structure, being up early, healthy lifestyle, healthy mind. I live the totally opposite rock’n’roll lifestyle where we’re up all night working and we drink way too much coffee. Our two worlds colliding is pretty incredible," she told the publication of their relationship.

Busby is a mixed martial arts (MMA) instructor and owns a gym where Amorosi works on the reception desk when she's not touring or writing music. 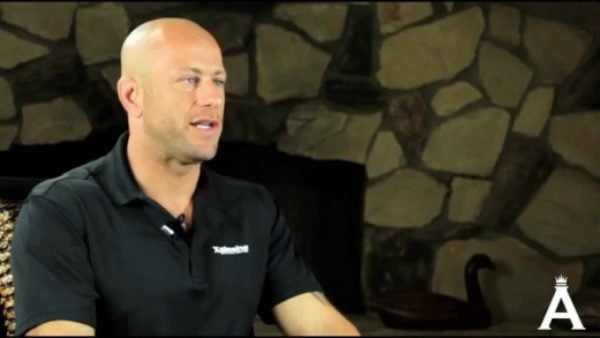 “None of our clients know what I do. I’m kind of ignored and that’s a nice sensation. I can come to the gym in my pyjamas dragging my child behind me, and we’re both looking like complete messes," she said.

The couple married in 2017 on Halloween in the desert in California.

Amorosi on why she kept her pregnancy out of the public eye.

Again, it's unusual in 2019 for a singer as iconic as Vanessa Amorosi to have a baby without the entire world knowing about it, but that's exactly what she did.

Amorosi gave birth to her first child Killian sometime in 2016 (Google 'Vanessa Amorosi child' and you'll literally find nothing), telling Stellar only her closest family and friends knew about her pregnancy.

“I had pre-eclampsia [and] some complications, so I stayed away from everyone. I didn’t go anywhere near a microphone when I was pregnant. I went silent on everybody," she said.

Amorosi also spoke about how she was clueless to what becoming a mother would really be like. So much so, she was planning a week before she was due to give birth to potentially go on tour with The Rolling Stones, which she now acknowledges was "delusional, thinking [having a baby] was going to be that easy".

I'm so excited to announce my new single 'Heavy Lies The Head' will be dropping Friday April 5! Get all the details via my website (link in bio), and be sure to sign up to the mailing list to be the first to listen when it's available. I can't wait to take this journey with you all ❤️ #newmusic

Amorosi's new single 'Heavy Lies The Head' will drop wherever you listen to your music on Friday April 5.

This year will be the first time Amorosi has brought her husband and son to Australia, the place where her career first started almost 20 years ago.

“Having him has brought so much joy to my life, now it’s even more important to show my son what I’ve been able to do. I want him to feel like Australia is his home."

Were you a Vanessa Amorosi fan? Are you excited to see her make a comeback to music in 2019?

Great to hear she is back on the music scene! "Absolutely Everybody" is just about one of the best songs ever. I still listen to it on my computer regularly, so glad she is an Australian female singer with talent & a great voice.

I worked in a music retail store when her career was first taking off - I recall being confused by the choice of album cover as it featured her in an oversized and unflattering football type jersey with her arms held up in a power pose. Mistakingly comparing her with the other pop princesses of the time, I was a little thrown that she wasn't donning the pretty/sexy look of her peers. Being a fan of 90s grunge back then, you'd think I would have been happy to see her bucking the trends. I guess I just didn't give her enough credit for being a pop star who also happened to have depth of character. What an impressive young woman she was and it seems she grew up into an amazingly down to earth adult. Good on her for choosing real life over being a celebrity. I guess that's the mark of a true artist - I'll be curious to hear her new stuff.