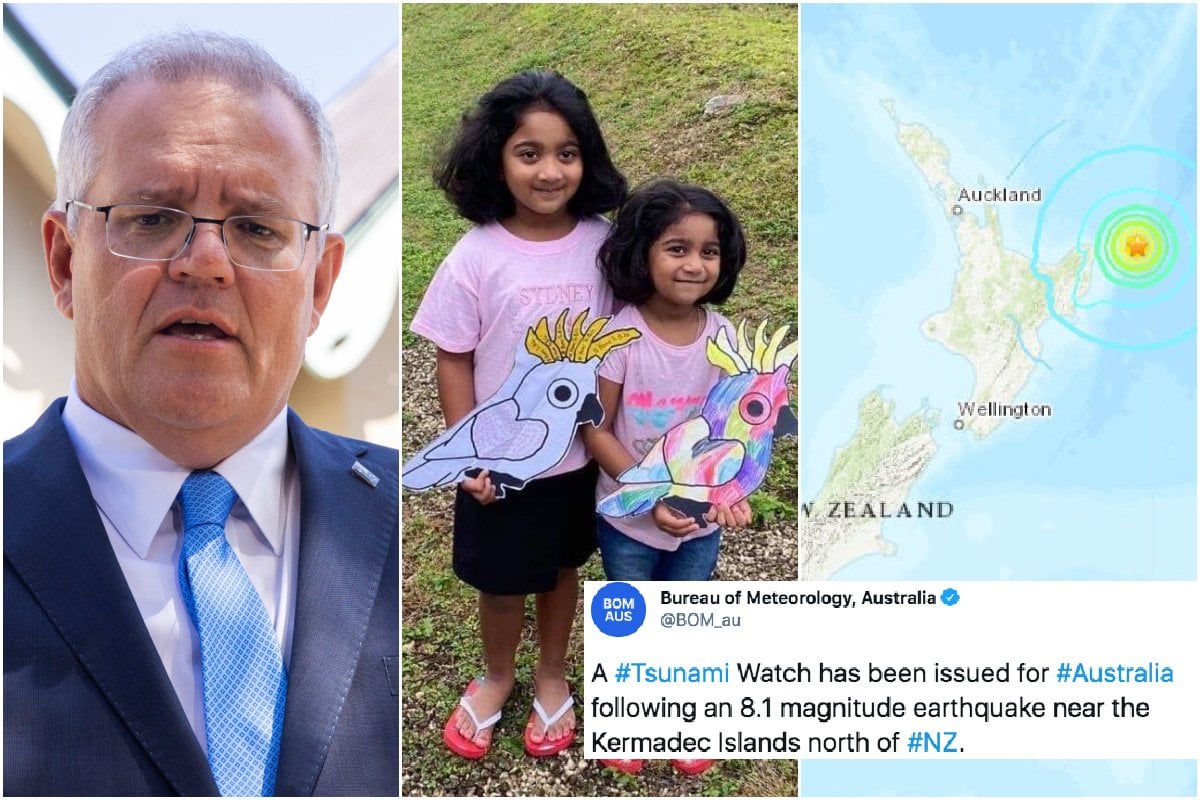 Senator Linda Reynolds has apologised for calling former Liberal staffer Brittany Higgins a "lying cow" after she alleged she was raped by a colleague inside the Defence Minister's office in 2019.

"I want to express how deeply sorry I am for these remarks and for any hurt and distress they have caused," Reynolds said in a statement.

The Australian reported that Reynolds made the remark in front of staffers the day Higgins' went public with her allegations.

#BREAKING: Defence Minister Linda Reynolds has apologised to Brittany Higgins for referring to her as a "lying cow".

"I want to express how deeply sorry I am for these remarks and for any hurt and distress they have caused," Reynolds said in a statement. pic.twitter.com/1eOBkN0iAK

A law firm representing Higgins earlier requested, "An immediate and unequivocal public withdrawal of (Ms Reynolds') comments and (an) apology to our client for the hurt and distress caused."

"The demeaning and belittling statement, in which you refer to our client as a member of the animal kingdom and declare her to be untruthful, is highly defamatory of our client's good character and unblemished reputation," the letter read.

"In response to a letter from Ms Higgins' lawyers yesterday afternoon, discussions are now underway through our legal representatives in an effort to resolve this matter as soon as possible, with any resolution to include an apology," she said.

The Defence Minister repeated her claim that the comment was not a reference to the allegations Ms Higgins had made.

"I have never questioned Ms Higgins' account of her alleged sexual assault and have always sought to respect her agency in this matter," she said.

Reynolds is currently on medical leave.

The European Commission and Italy have blocked a shipment of AstraZeneca's coronavirus vaccine destined for Australia after the drug manufacturer failed to meet its EU contract commitments, two sources say.

The sources said AstraZeneca had requested permission from the Italian government to export 250,000 doses from its Anagni plant near Rome.

The Italian government refused and the European Commission supported its decision, the sources said.

Italy blocks the export of Covid-19 vaccines to Australia in a dramatic escalation of the EU's dispute with AstraZeneca https://t.co/rVuPpUaiWm

An EU source in Brussels said authorities of member countries had the final say in such matters.

The move came just days after Prime Minister Mario Draghi, who took office last month, told fellow EU leaders that the bloc needed to speed up vaccinations and crack down on pharma companies that failed to deliver on promised supplies.

Officials have blamed the slow progress in part on supply problems with key manufacturers.

The first AstraZeneca jabs will be administered in the next few hours.

Separately, a Gold Coast nurse had to be rushed to hospital after she went into anaphylactic shock shortly after receiving the Pfizer COVID-19 vaccine on Thursday.

"Anaphylaxis has been identified as a possible side effect from any vaccination. Staff are well prepared for this and stringent processes are in place to manage such reactions," Queensland Health told the Courier Mail.

Coastal residents have been told to move immediately to higher ground after a third massive earthquake off the coast of New Zealand.

A severe 8.1 magnitude earthquake has struck off the Kermadeic Islands, northeast of New Zealand's North Island this morning, prompting a tsunami warning.

This is the third and largest quake above magnitude seven to hit the region earlier this morning at a depth of 90km.

A 7.1 magnitude quake happened at 2.27am, centred 100 kilometres off the North Island's East Coast. More than 52,000 people reported feeling it across the country.

Following this, a magnitude 7.4 earthquake happened at 6.41am.

A tsunami watch has now also been issued for Australia after the third quake.

A #Tsunami Watch has been issued for #Australia following an 8.1 magnitude earthquake near the Kermadec Islands north of #NZ.

There is a potential tsunami threat to #NorfolkIsland in the coming hours.

Mr Morrison is standing by Mr Porter - who denies the allegations - and has so far rejected calls to launch an independent inquiry into the sexual assault accusations.

The family of the woman are supportive of any inquiry which could shed light on her death.

Mr Porter emphatically denies the allegations he raped the woman in 1988 when he was 17 and she was 16.

Scott Morrison is standing by Christian Porter and has so far rejected calls to launch an independent probe. https://t.co/6bTwYB9Kwn

The South Australian woman went to NSW police last year, but withdrew her complaint citing medical and personal reasons before taking her own life in June.

Mr Porter is on two weeks' leave and has said he won't quit cabinet.

"It's time for the prime minister to give both himself and Australians confidence that Mr Porter is a fit and proper person to hold the office of attorney-general," he told reporters in Perth on Thursday.

"This is the first law officer of the land. That does matter. That does make a difference. This cannot be the end of the matter.

The Greens and some independent MPs support a judicial probe.

The Duke of Edinburgh has undergone successful heart surgery - just three months before his 100th birthday.

Buckingham Palace says Prince Philip, the nation's longest-serving consort, had the procedure for his pre-existing heart condition at St Bartholomew's Hospital in London on Wednesday.

The 99-year-old duke will remain in hospital for "treatment, rest and recuperation" for a number of days.

Philip has been treated for heart problems in the past and in 2011 was rushed to hospital by helicopter from Sandringham after suffering chest pains as the royal family were preparing for Christmas.

Philip was initially admitted this time to the private King Edward VII's Hospital in central London on February 16 after feeling unwell before being moved by ambulance to St Bartholomew's on Monday.

He has now spent 16 nights in hospital - his longest-ever stay.

Tasmania on verge of euthanasia laws.

Tasmania is almost certain to become the third Australian jurisdiction to legalise voluntary assisted dying after the legislation passed the state's lower house.

Members voted 16-6 in favour of the bill late on Thursday night after lengthy debate throughout the week.

To become law, the bill must be given a second green light by the upper house, where it was introduced and passed unanimously late last year.

Premier Peter Gutwein was among a handful of Liberals to support the bill in a conscience vote, which allowed all MPs to vote along personal preferences.

All nine Labor members voted for the legislation as did both Greens MPs.

It is the fourth time proposed euthanasia laws have come before Tasmania's parliament.

Supporters from Christmas Island to Hobart will call on the prime minister to free the Biloela family held on Christmas Island, during candlelight vigils marking three years of detention.

Family friend and long-time campaigner Angela Fredericks said there had been four immigration ministers since Priya, Nades and their daughters were taken from their home in Central Queensland more than 1000 days ago.

She said it was now up to the Prime Minister to "make the captain's call" and let them come home.

Tomorrow on Christmas Island, QLD-born Kopi and Tharni will wake up to the start of their 4th year in detention, 5,000km from their Biloela home. All Scott Morrison has to do to bring them home to Biloela is ask one Minister to circle one word on one document. pic.twitter.com/3psRJ55nye

Friends will gather at 5am on Friday in Biloela to mark the time the family's home was raided, before supporters in cities and towns around Australian gather at dusk.

Australian actor and former Biloela resident Michael Caton will speak at the Sydney vigil, as will Senator Kristina Keneally.

Life in detention is "getting harder and harder" for the family according to Ms Fredericks, who is in regular contact.

"Little Kopika, she's getting more and more distressed by the situation," she said. "She loves going to school and loves getting to leave the detention centre, however she's just so sad about having to constantly go back there and be locked up."

For three-year-old Tharnicaa, detention is all she's known.

"For her its normality, which is really sad," Ms Fredericks said.

BBC journalist who got infamous Diana interview will not face a criminal investigation.

The BBC journalist accused of faking documents to secure an interview with Princess Diana in the 90s, will not face a criminal investigation.

Scotland Yard have confirmed they have ruled out taking action against Martin Bashir amid claims he forged bank statements to secure the infamous 1995 interview with the then-Princess of Wales.

The Metropolitan Police has ruled out a criminal investigation into BBC journalist Martin Bashir’s 1995 interview with Diana, Princess of Wales.https://t.co/zyVPnAQmd9

"In recent months the Metropolitan Police Service received correspondence alleging unlawful activity in connection with a documentary broadcast in 1995," Commander Alex Murray said in a statement, adding: "This was carefully assessed by specialist detectives."

"Following this detailed assessment and in view of the advice we received, we have determined that it is not appropriate to begin a criminal investigation into these allegations. No further action will be taken."

- Police in Washington DC are on high alert this morning after FBI intelligence revealed a possible plot to attack the US Capitol building.

- French club the Catalans Dragons have not issued a 2021 squad number for dual-code Australia international Israel Folau, who he played for in 2020.

- New Zealand Police have charged a man following a threat to car bomb the two houses of worships targeted in the Christchurch Mosques terror attacks.