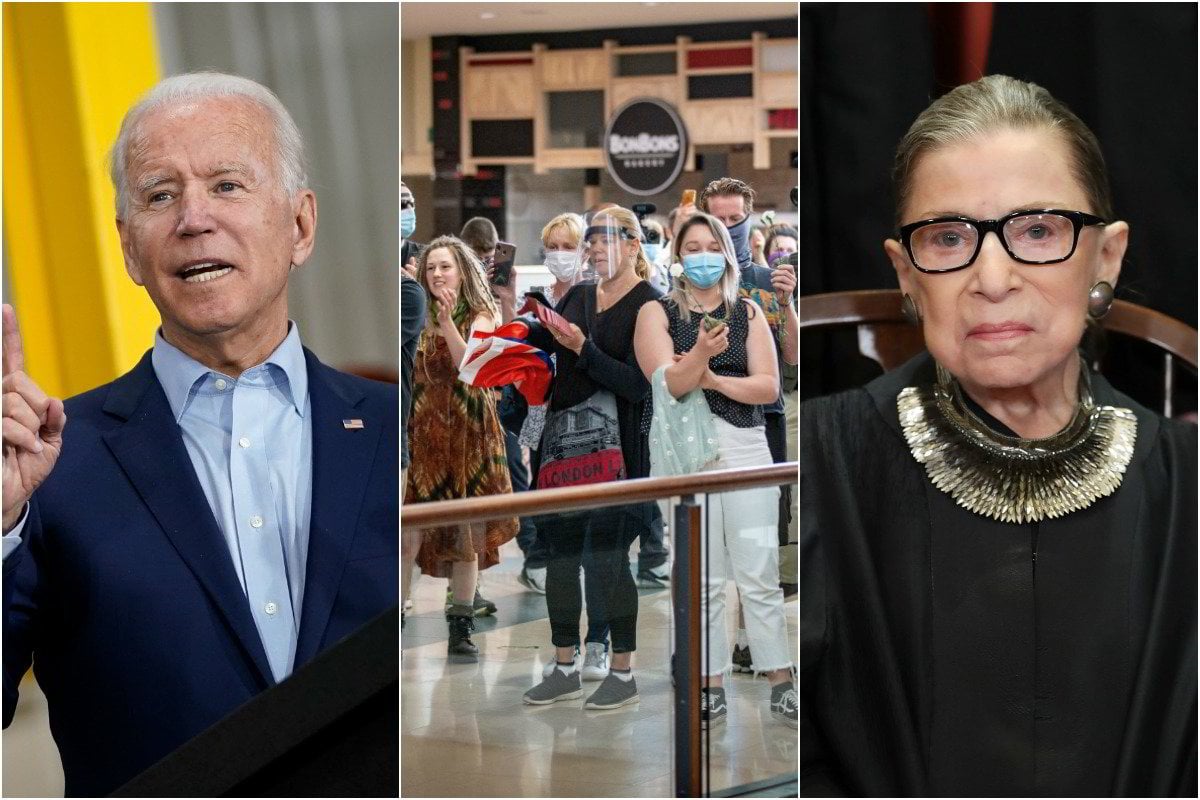 Democratic presidential candidate Joe Biden has urged Senate Republicans not to vote on any candidate nominated to the Supreme Court as the November election approaches, calling Donald Trump's plan an "exercise in raw political power."

Biden was speaking on Sunday, the day that a second Senate Republican voiced objections to Trump's plan to vote quickly on a replacement to liberal Justice Ruth Bader Ginsburg, who died on Friday.

Such an appointment by the president, if approved by the Senate, would cement a 6-3 conservative majority that could influence American law and life for decades.

Gender equality trailblazer and US Supreme Court justice Ruth Bader Ginsburg has died. Fierce, dignified and brilliant, the 87-year-old carved an inimitable legacy as a champion of equal rights. Read more at the link in our bio. #RBG⁠ ⁠ ⁠

"Voters of this country should be heard ... they're the ones who this Constitution envisions should decide who has the power to make this appointment," Biden said in Philadelphia. "To jam this nomination through the Senate is just an exercise of raw political power."

Biden said that if he wins the November 3 election, he should have the chance to nominate the next Supreme Court justice.

The former vice-president rejected the idea of releasing the names of potential nominees, saying that doing so, as Trump did, could improperly influence those candidates' decisions in their current court roles as well as subject them to "unrelenting political attacks."

Tune in as I deliver remarks on the passing of Justice Ruth Bader Ginsburg and the future of the Supreme Court. https://t.co/i9CleOZIol

He reiterated his pledge to nominate an African-American woman to the court, which would be a historic first, if he has the opportunity.

Trump's plan drew immediate criticism from Democrats, who noted that in 2016 Republican Senate Majority Leader Mitch McConnell blocked a vote on a Democratic appointee, saying it was inappropriate to do so in an election year.

Victorian numbers cause for optimism as NSW scrambles over taxi driver.

Just as Victoria's falling new coronavirus cases have provided cause for optimism, NSW is in the midst of a major contact tracing exercise after a taxi driver worked while potentially infectious.

Victoria recorded just 14 new infections on Sunday, the lowest number in three months, pushing Metropolitan Melbourne's 14-day average down to 36.2, well below the state's target of 50 to lift some virus restrictions later this month.

"These numbers are cause for great optimism and positivity," Premier Daniel Andrews told reporters on Sunday.

In NSW a taxi-driver tested positive on Saturday, one of two new cases reported in the state.

NSW Health says anyone who entered his vehicle between September 8 and 18 should monitor for symptoms.

His taxi trips during that time spanned the suburbs of Moorebank, Bankstown, Chipping Norton, Liverpool, Lidcombe, Warwick Farm and Milperra.

The national death toll climbed to 849. Victoria reported five new deaths linked to aged care facilities, while NSW recorded the death of a man in 70s at the Royal North Shore Hospital.

Queensland also reported two new cases, while in Western Australia, a 13-year-old boy tested positive to the virus while in quarantine in Perth after recently returning from overseas.

Air New Zealand has told the Sydney Morning Herald travel between Australia and New Zealand is unlikely to start back up for another six months.

A trans-Tasman bubble had originally been touted for September this year, before a second wave of infections hit both Melbourne and Auckland driving up coronavirus numbers.

Prime Minister Scott Morrison again raised the idea on Friday, now that Australia's COVID clusters are back on the decline, but Air NZ's boss has said: "I certainly do not believe we will see anything across the Tasman this calendar year."

"It’s hard to believe it would be before March next year and could well be longer,” he said. "If it comes back quicker, we’re going to pop some champagne."

Under the funding from the Medical Research Future Fund, the University Of Melbourne will receive almost $3 million to develop two vaccine candidates.

The University of Sydney will also receive almost $3 million for a clinical trail to test the safety and effectiveness of a novel DNA-based COVID-19 vaccine.

The package includes a childcare fee freeze for Victorian families until January 31, 2021, while there is a relaxation of the activity test for Australian families whose activity level has been affected by COVID-19 will also be extended to April 4, 2021.

Anti-lockdown protests continued in Melbourne over the weekend, with about 50 people gathering at Chadstone Shopping Centre on Sunday afternoon chanting Farnham's ballad 'You're The Voice'.

The song has become a common war cry at demonstrations, and Farnham and his camp have had enough. 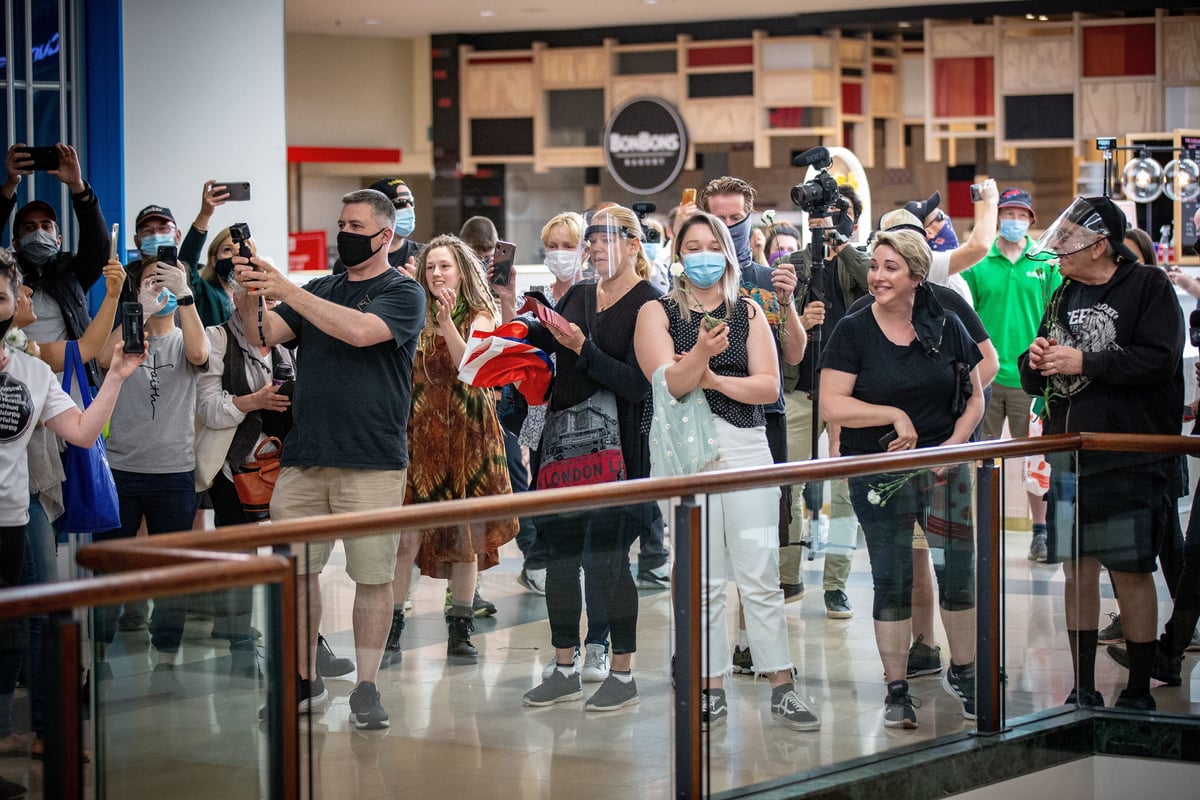 Speaking to 7NEWS, Farnham's manager Glenn Wheatley said John vehemently objected to the use of his song in a public protest during the lockdown.

“It’s very offensive to John and I that they choose to use 'You’re the Voice' as the theme of this protest,” he said.

Protesters have now gathered for three consecutive weekends, despite pleas from the Victorian government to abide by public safety orders and lockdown restrictions.

NSW Nationals MP Leslie Williams has quit the party and intends to defect to the Liberals as the fallout from the koala policy saga continues.

In a statement, the Port Macquarie MP revealed she made an application to join the NSW division of the Liberal Party.

"Sadly, the events of the past weeks and months have cemented my decision to resign as a member of the NSW Nationals effective immediately," Ms Williams said in a statement on Sunday.

#BREAKING MP Leslie Williams has dramatically quit the NSW Nationals over the ‘reckless and unreasonable’ actions of Deputy Premier John Barilaro and has applied to join the Liberal Party. https://t.co/yim9GUvWIT

Mr Barilaro threatened to implode the coalition government if concessions were not made over the koala policy, which he described as a "nail in the coffin for farmers".

The Nationals are concerned changes to the Koala Habitat Protection State Environmental Planning Policy limit land use on farms and the ability to rezone areas for development.

He backed down when Premier Gladys Berejiklian gave him an ultimatum that either the Nationals MPs support the government or its ministers would be sacked from cabinet.

Britain is at a tipping point on COVID-19, health minister Matt Hancock has said, warning that a second national lockdown could be imposed if people don't follow government rules designed to stop the spread of the virus.

COVID-19 cases have risen sharply in recent weeks to more than 4000 per day. Prime Minister Boris Johnson has called it a second wave and stricter lockdown measures have been introduced in areas across the country - with London possibly next in line.

We are at a tipping point.

This country faces a choice: everyone abides by the rules & we control #coronavirus, or more restrictions will be needed.

Let's pull together in the national interest, & we will beat this virus. pic.twitter.com/YWHcTDdSlT

"The nation faces a tipping point and we have a choice," Hancock told Sky News on Sunday. "The choice is either that everybody follows the rules ... or we will have to take more measures."

Hancock later told the BBC that a second national lockdown was a possible option.

Johnson announced fines of up to 10,000 pounds ($A17,700) on Saturday for people in England who break new rules requiring them to self-isolate if they have been in contact with someone infected with COVID-19.

- The 72nd Primetime Emmys Awards kicks of at 8am AEST time this morning. It's the first big Hollywood ceremony to attempt a live — but socially distanced — broadcast amid the pandemic.

- India has registered almost 93,000 new coronavirus cases in the past 24 hours, and is expected to surpass the US as the worst hit country within weeks.