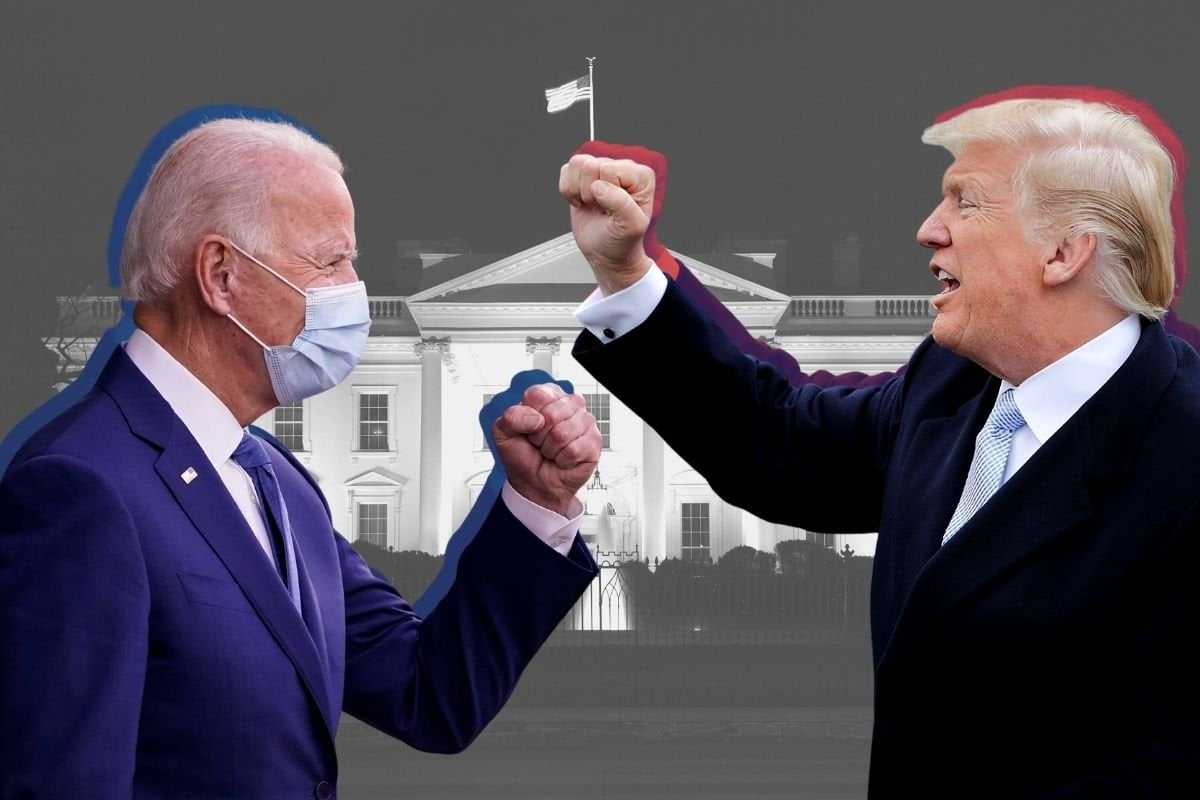 Over the past few hours, Americans have been queuing at polling stations across the United States and casting their ballots in perhaps the most consequential election in a century.

The entire country and much of the world is watching, bracing to learn which candidate will emerge victorious: Republican President Donald Trump or Democratic nominee and former Vice President Joe Biden.

Watch: It's been one of the most polarising presidential contests in US history. Case in point...

Depending on a few key states, that could be clear by the time Australians go to bed, or in a few days' time. Few are willing to speculate with confidence — and little wonder, given how many polls got it wrong in 2016.

But let's give it a go shall we?

Mamamia's daily news podcast, The Quicky, called Chas Licciardello of ABC's Planet America to wade through some possible outcomes and just how likely they will be.

The electoral college system means that it's possible for a candidate to earn more votes from the public but not win the presidency, simply because those votes haven't come from enough different states.

(See our earlier article for a super simple explanation about how the electoral college works.)

It happened to Hillary Clinton in 2016. So could it happen again? Could Donald Trump win in enough small states to hit the magic 270 electoral college votes?

According to Chas, that would depend on the polls having made "a very big mistake". Because the polls in two key states are tipping firmly in Biden's favour.

"The polling errors in 2016 were about four points. There was one state with the six-point error, which was Wisconsin, but they basically hadn't polled in Wisconsin [prior to that election]," said.

According to Chas, things have changed. They've polled voters heavily in the key battleground states, so there's less likely to be a surprise result.

"And they have adjusted their polling methods to try to take into consideration the errors that occurred in 2016," he said.

"So, [Trump] would need a bigger poll error than happened in 2016, amongst people who are awake to the potential poll errors because of 2016."

Scenario: Biden wins the presidency, but loses the senate.

"I think the real issue in this election is the Senate, which to me is really on tenterhooks; it's a real 50/50 situation. And it's possibly as important as the presidency."

"If Biden ends up being president, but the Senate is either Republican held or exactly 50/50, people are going to wish they talked more about the senate at this point in time, because that's not a good result."

That's because it would mean Biden's administration would find it incredibly difficult to pass any laws.

Scenario: There won't be a result for days.

Pennsylvania, Wisconsin and Michigan are the key states likely to determine to will clinch the presidency. They also happen to be the three states that won't even be close to finishing counting their votes on election night.

Why? It's all to do with those states' law around mail-in ballots, which have been cast in record numbers this election.

"A little-known aspect of the law there says that those counters are not allowed to make contact with the mail-in votes or absentee votes until election day, with the exception of Michigan where they're allowed to start the day before," Chas said.

Earlier this week, President Donald Trump threatened that he would be "going in with our lawyers" to try to block the counting of mail-in votes that arrived after election day, even if they were posted before: "I think there's great danger to it, and I think a lot of fraud and misuse can take place," he said.

The Supreme Court decision on voting in Pennsylvania is a VERY dangerous one. It will allow rampant and unchecked cheating and will undermine our entire systems of laws. It will also induce violence in the streets. Something must be done!

Other states start counting theirs weeks ago. So why don't Pennsylvania, Wisconsin and Michigan do the same?

"Their legislature wouldn't change the rules to allow them to do so when the governor tried to change them, because they could see this coming a mile away," Chas said.

"Who are the state legislature that won't change the rules? It's Republicans. So Republicans have created a situation where the vote is going to be late, it's going to take days and days and days for them to count all these absentee votes and mail-in votes and early votes — at least three days. And then the Republicans are turning around and complaining about it and saying it must be rigged if the vote isn't conducted on the night.

"And to me that is extremely cynical, but that does appear to be the tactic."

Scenario: It's a tie.

The electoral college is made up of 538 electors, and a candidate needs to win a majority of their votes to achieve victory. i.e. 270 or more.

"It's a very real possibility, to be honest," Chas said. "If Joe Biden wins Michigan and Wisconsin but loses Pennsylvania and wins Arizona.... then you have the makings of a tie."

Here's how that works (strap yourself in...).

"You have what they call a state delegation vote in the House of Representatives. Every state gets one vote in the House, depending on how many congressional reps they have from each party," Chas said.

"So, say, in California, since there are more Democrat House reps than Republican House reps, California will get one vote for Democrats. So it's 50 votes in total for the 50 states, and they see who gets the most of them."

If that vote also ends up in a tie, one state would have to flip their vote so there's a winner. If that hasn't happened by Inauguration Day on January 3, the vice president-elect — chosen by a simple majority vote in the Senate — will become the acting president until the House breaks the tie.

"So for however many days or weeks that would be, if the Democrats are holding the Senate, then Kamala Harris becomes the president temporarily," Chas said.

Verdict: Unlikely. But not impossible.