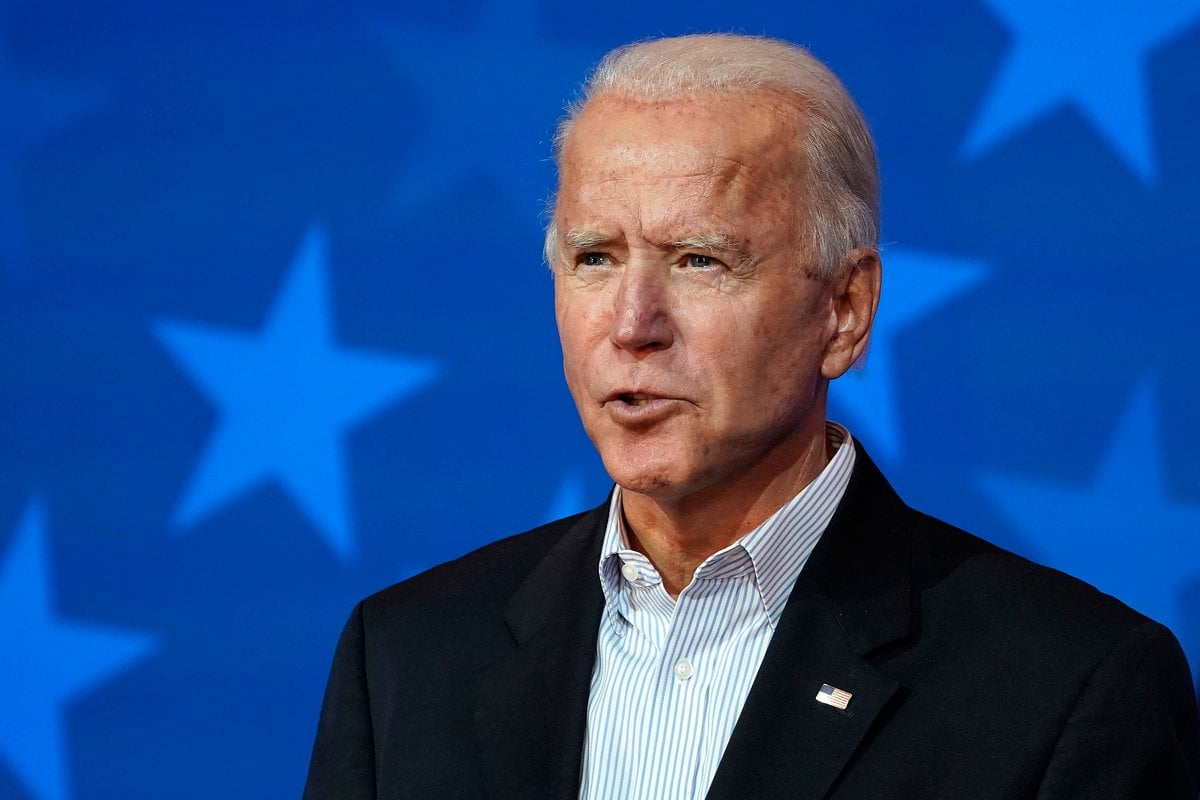 The former vice president crept ahead of incumbent President Donald Trump overnight (Australian time) in the key states of Georgia and Pennsylvania.

As it stands, those states, along with Nevada and North Carolina, are the only ones for which a winner is yet to be called by the Associated Press.

Remember: each state represents a certain number of electoral college votes. The candidate who wins the popular vote in that state earns its electoral votes. First to 270 wins the presidency.

At the time of writing, Biden is at 264 electoral college votes and Trump at 214, meaning the former only needs to win one of the remaining states to become the new president.

According to the latest updates available at the time of publishing, this is the state of play.

The vast majority of votes currently being counted are mail-in ballots, in which Biden has a clear advantage.

While the Democrats urged their supporters to use this method to avoid crowds amid the COVID-19 pandemic, Republican Donald Trump spouted baseless theories that such votes would be vulnerable to fraud.

And as the latest numbers roll in, he's sticking to that allegation.

Here's what you need to know about what's happening in the election today.

"We are not waiting to get the job done": Biden speaks as victory looms.

Democratic candidate Joe Biden all but declared victory in a public address from Delaware today.

Though news networks are yet to call the presidential race in his favour, the former VP said it was becoming clearer by the hour that "record numbers of Americans of all races, faiths, religions, chose change over more of the same".

"They have given us a mandate for action on COVID, the economy, climate change, systemic racism.

"They have made it clear that they want the country to come together, not continue to pull apart.

The numbers tell us a clear and convincing story: We're going to win this race.

Biden assured his supporters that while they are waiting for the final votes to be counted, he and his running mate, Senator Kamala Harris, are "not waiting to get the job done".

"Yesterday, Senator Harris and I held meetings with groups of experts on public health and economic crisis this country is facing," he said.

"I want everyone, everyone to know on day one, we are going to put our plan to control this virus into action. We can't save any of the lives lost, any that have been lost, but we can save a lot of lives in the months ahead."

In an apparent comment on President Donald Trump's unproven allegations of voter fraud, he said, "Your vote will be counted. I don't care how hard people try to stop it; I will not let it happen. People will be heard."

Closing his short address, Biden vowed that he would be a president for all Americans.

"No matter who you voted for, I'm certain of one thing, the vast majority of the 150 million Americans who voted, they want the vitriol out of our politics," he said.

"It is time for us to come together as a nation to heal."

President Donald Trump opted not to speak to the media today.

Tune in as I address the nation on the current state of the race. https://t.co/w0er4issEk

Georgia's secretary of state says he expects a recount due to the small margin for the US presidential election in the battleground state, where Democrat Joe Biden has a small lead over Republican President Donald Trump.

"With a margin that small, there will be a recount," Brad Raffensperger, Georgia's secretary of state, told reporters on Friday.

Officials said about 9,000 military and overseas ballots were still outstanding and could be accepted if they arrive on Friday and are postmarked on Tuesday or earlier.

There are two ways of seeking a recount in Georgia.

In that case, state law gives the secretary discretion about whether to conduct a recount.

Local election officials in Georgia also can conduct recounts in their counties if they think there is a discrepancy in the results.

As it currently stands, Trump has 49.3 per cent of the public vote and Biden 49.4 per cent.

As President Donald Trump fumes over the unfolding US presidential election results, some of his fellow Republicans in Congress have hinted that he ought to tone down his rhetoric.

Trump on yesterday gave a sensational press conference at the White House, in which he alleged — without evidence — that the Democrats are "trying to steal an election".

"If you count the legal votes I easily win," he told reporters.

Joe Biden should not wrongfully claim the office of the President. I could make that claim also. Legal proceedings are just now beginning!

His campaign has filed lawsuits over the vote count in key states, alleging various irregularities including people voting from out of state and late mail-in ballots being counted.

Two such suits have already been dismissed in court, and the Democrats argue it's little more than a stalling tactic.

Amid Trump's repeated and unfounded allegations of election fraud, Senator Roy Blunt, a member of the Republican leadership, told reporters that "at some point" the White House will have to take such allegations to court and lay out the evidence.

"I also don't think it's unreasonable for Biden to accept the unofficial result and do whatever he thinks he should do," Blunt said.

That unofficial result could come as early as Saturday (Australian time) with Biden planning an address to the nation.

Throughout his campaign, Biden said he would work to heal the deep political divisions plaguing the US. That work could be impeded if Trump convinces at least part of the country that Biden's win was illegitimate.

No one is going to take our democracy away from us. Not now, not ever.

America has come too far, fought too many battles, and endured too much to let that happen.

Some 30 per cent of Republicans accept Trump's claim that he won the election, though a bipartisan majority of Americans do not, according to a Reuters/Ipsos poll published on Friday (Australian time).

Some senior Republicans voiced support for the president's claims. House of Representatives Minority Leader Kevin McCarthy said on Fox News: "President Trump won this election. So everyone who's listening, do not be quiet."

Senate Judiciary Committee Chairman Lindsey Graham, an avid Trump supporter, told Fox News that he was prepared to donate $US500,000 ($A687,966) to Trump's legal efforts in multiple states.

The Republican National Committee is aiming to raise at least $US60 million ($A83 million) to help finance Trump's legal battles, sources told Reuters.

But other Republicans in Congress were not as excited about a drawn-out battle and its toll on America if it becomes clear that Biden won the election fair and square.

Senator Rob Portman of Ohio, which Trump won handily on Tuesday, echoed Senate Majority Leader Mitch McConnell in urging that ballots be counted in accordance with each state's laws.

"I hope we can reach a final resolution as quickly as possible," he said in a statement.

Senator Mitt Romney, the 2012 Republican presidential candidate, knows the agony that can come with defeat. But he castigated Trump for claiming the election was being stolen.

"Doing so damages the cause of freedom here and around the world... and recklessly inflames destructive and dangerous passions," Romney said on Twitter.

More to come throughout the day, including Joe Biden's upcoming press conference.....