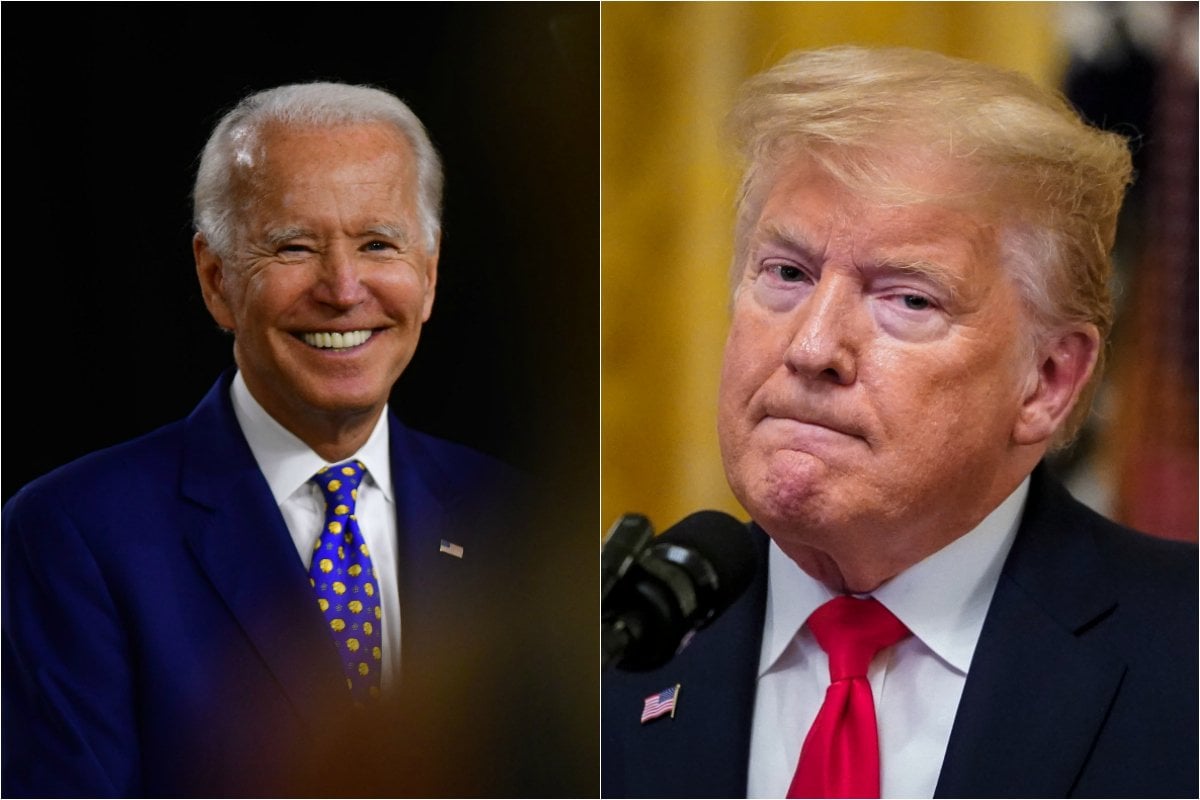 There are 14 days until the US Presidential election, when Americans will decide if President Donald Trump will remain in the White House or be succeeded by Democratic Party nominee Joe Biden. Best known as Barack Obama's former vice-president, Biden is campaigning alongside his vice-presidential pick, Kamala Harris.

According to the polls, he has led a successful race. Both national and state polls show Biden as the winner of the November 3 election.

But after the unexpected win of Donald Trump in 2016, against Hillary Clinton, can we even trust polls?

Here's everything we know about who will win, according to the experts.

What do the national polls say?

National polls say Joe Biden is more popular that the incumbent, President Trump, suggesting he has more than 50 per cent of the vote.

However, national polls are poor indicators for who will actually win.

In 2016, Hillary Clinton won the popular vote by nearly three million votes. She didn't win, though, because she didn't garner enough Electoral College votes. Essentially, the American voting system means that even if a majority of Americans support Biden, it's more important how the supporters are spread across the country.

"The national poll is all very interesting, but it means nothing," ABC Planet America's Chas Licciardello told Mamamia's daily news podcast The Quicky.

"The state polls are the ones that count. No one gets a single position in the White House based on a national poll."

So, what do the state polls say?

Joe Biden is looking promising on the state polls.

The majority of states in America tend to vote the same way in every election. For example, Utah has voted for the Republican nominee in every presidential election since 1964.

This means presidential candidates will be won in the battleground states - also known as swing states.

Key battleground states, which were won by Trump in 2016, include: Arizona, Michigan, Iowa, Wisconsin, Florida, North Carolina, Georgia and Pennsylvania.

According to Licciardello, the three most important of these swing states will be Wisconsin, Michigan and Pennsylvania.

"If Biden wins those three states, he wins the whole election," Licciardello explains.

So - it looks promising for Biden.

Yes. Which is, of course, why so many people are hesitant to believe the polls this year. But according to Licciardello, there's reason to believe that the polls will be more trustworthy this year. 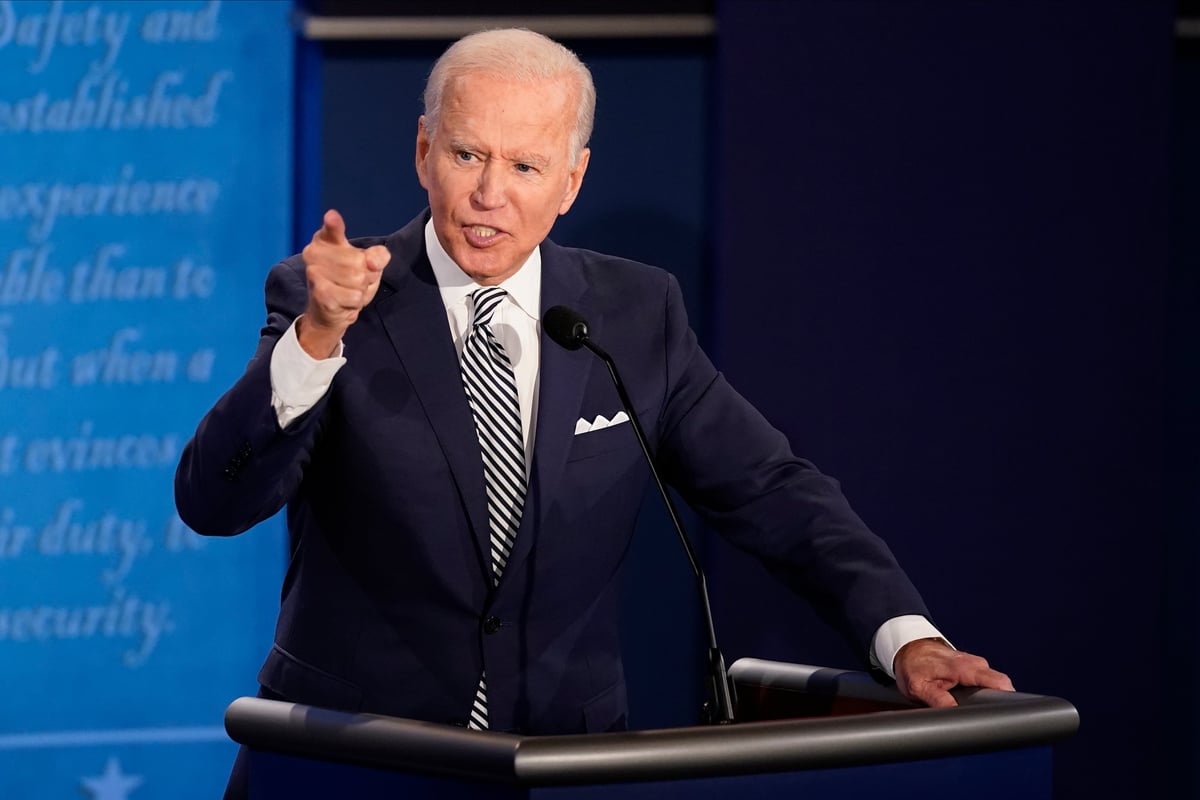 The political analyst went on to explain this is because "people have already made up their mind one way or another how they feel about whether an incumbent should be returned to the presidency, whereas when there's no incumbent, they're still making up their minds about both of the challengers."

Licciardello added that while margins are similar, the numbers are higher, meaning there are less people who are undecided, and who could sway the vote last minute.

"So if you're running against an incumbent and 52 per cent of people have decided that they don't like him, it's very hard to convince them to change their mind at the last second, from what they thought for the last four years, which is the case here with Joe Biden. He's passed 50 per cent in all these key states."

Plus, Licciardello isn't alone in thinking the polls will be more trustworthy this year.

The New York Times polling analyst Nate Cohn also says the state polls will be more accurate in 2020 because there are less undecided voters.

"At this point in 2016, about 20 per cent of voters either supported a minor-party candidate or said they were undecided," Cohn has explained. "Today, the number is about half that level."

Reply
Upvote
1 upvotes
If I were a betting woman, I would be putting my money on Trump.

Actually, not a bad idea, I could put some money on Trump, then if he wins, then I at least get some money to buy some sad beers with and, if he loses, the world has won and that's even better :)

Reply
Upvote
@laura__palmer Regarding Kayne's odds, I note that Hillary Clinton has lower odds at 300-1, and she's not even running :)  haha.   Actually since you raise the point, I'm pretty sure that I offered you a $20 bet on Trump winning a second term probably 2 or 3 years ago now.  Except you were going to bet against him.
L
laura__palmer 2 years ago

Reply
Upvote
1 upvotes
@james b Oh, I did. I was fully convinced a few years back that his supporters would see through his rubbish rhetoric and realise he's going to lead them into disaster. What a fool I was! Before Corona, he would have definitely won by a large margin, but it's going to be a bit closer now, I think. Either way, I'm reneging on that bet :D
I also think Biden is about the worst choice the dems could have gone with, he was never going to inspire the masses. He will also be 81 at the end of his first term. Why the USA thinks that two old men with obvious mental issues are the best choices for leader is beyond me.

Reply
Upvote
@laura__palmer "Biden is about the worst choice the dems could have gone with"
America has a Primary system to select who will run. So it's not the party that selected Biden.
L
laura__palmer 2 years ago

Reply
Upvote
@simple simon Yeah, but they put their support for one candidate over the another. They push for their fave.
C
cat 2 years ago

Reply
Upvote
My money is on a Biden win, but Trump supporters will be protest & someone will be assassinated. Probably a governor Or senator since they won’t be able to get to Kamala..
R
rush 2 years ago

Reply
Upvote
@cat Both Governors and Senators are assigned personal security.  It is those kind of accusations  about Trump supporters which alienate ordinary people as Hillary learnt in 2016.  As for Trump and his supporters not accepting the election results, it is somewhat ironical given Democrats have been accusing Trump of stealing the election from Hillary via the Electoral College system.
L
laura__palmer 2 years ago

Reply
Upvote
1 upvotes
@guest2 Considering right wing domestic terrorism is on the rise, it's a pretty solid accusation:
"...research shows the threat posed by far-right extremist groups far exceeds that of other groups, including left-wing networks and attackers inspired by Islamist extremism." https://theconversation.com/trump-claims-left-wing-extremism-is-engulfing-the-us-conflating-protests-with-terrorism-is-the-real-danger-142649

There's also this: https://www.wsj.com/articles/in-michigan-plot-to-kidnap-governor-informants-were-key-11603013401
Like, they were actually planning to do what Cat says in her post.

It's not just some hysterical left wing fear, it's a legitimate problem, backed up by research, stats and data.

There is also a difference between "accusing Trump of stealing the election from Hillary via the Electoral College system" and what Trump has been doing, which is undermining democracy to sew doubt in the minds of his supporters if he loses and dog-whistling racist, sexist right wing groups like the Proud Boys, who are very much standing back and standing by, awaiting orders from their leader.
Resources
Very Peri
News
General
Opinion
True Crime
Politics
Sport
Explainer
Entertainment
Celebrity
Reality TV
Movies
TV
Books
Rogue
Royal
Lifestyle
Beauty
Fashion
Weddings
Home
Wellness
Health
Fitness
Travel
Food
Family
Before The Bump
Pregnancy
Baby
Kids
Teens
School
Parent Opinion
Work & Money
Money
Finance
Career
Lady Startup