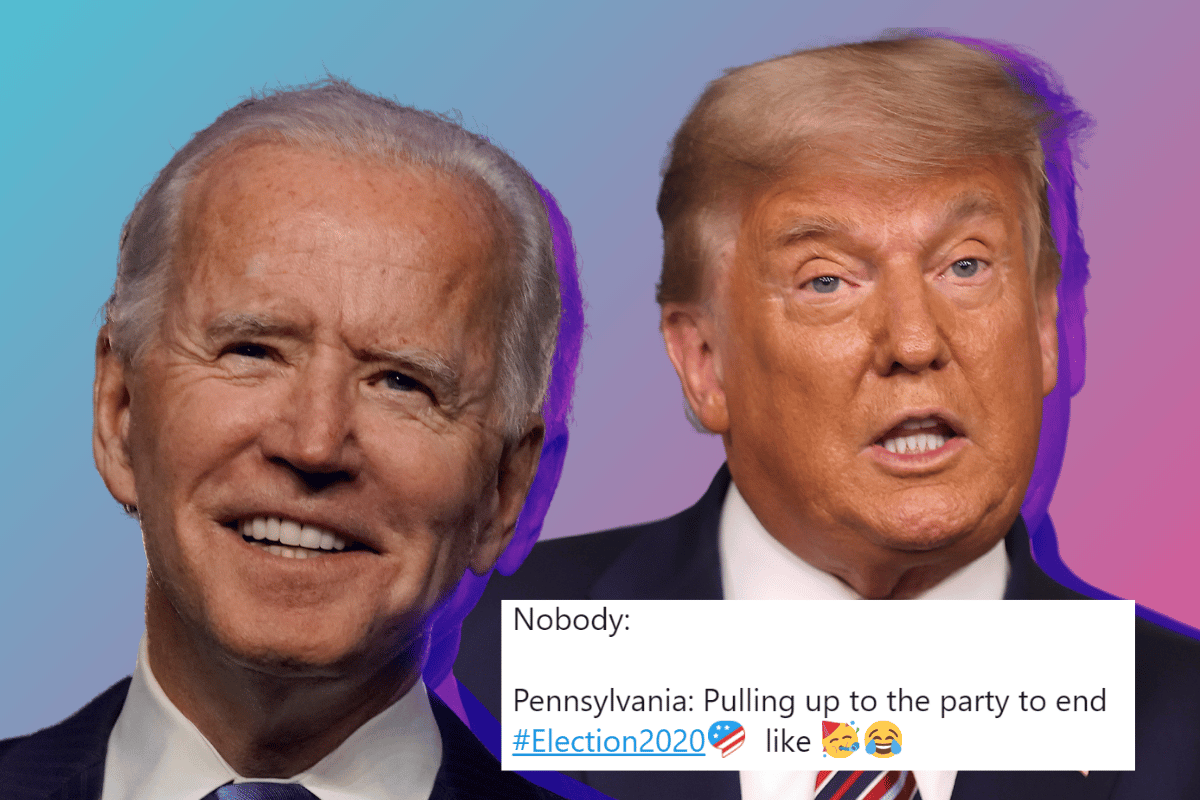 This morning Australians woke up to the news we've all been waiting for. The US election had finally been called.

After days of anxiously waiting, refreshing our news feeds and scrolling through Twitter memes, Joe Biden was elected as the 46th President of the United States. The 77-year-old won at least 24 states after flipping the state of Pennsylvania blue and claiming more than the 270 college votes required for the White House.

The news sent waves of excitement throughout the US as crowds took to the streets to celebrate Biden's victory.

Listen to Mamamia Outloud, where Mia, Holly and Jessie discuss how Trump is handling his election failure. Post continues after podcast.

Over on Twitter, the reactions were much the same. So, we decided to round the best ones up for you (because you deserve it after that long wait).

Here are 23 of the best memes about the US election.

The most cathartic episode of The Apprentice yet 💙💙💙

When 2020 forgets its coffee and gives us some damn good news for once...#ElectionResults2020 pic.twitter.com/EpJ0tdLG7z

Trump...TO THE LEFT TO THE LEFT EVERYTHING YOU OWN IN A BOX TO THE LEFT #PresidentElect #USElection pic.twitter.com/eY6UTR3HN5

Trump’s election team trying to explain the US Election results ‘again’ to their boss... pic.twitter.com/hDOZFnZr4Y

*Nevada taking its time and enjoying the memes*
Pennsylvania: pic.twitter.com/HJjzmNArUl

Pennsylvania: Pulling up to the party to end #Election2020 like 🥳😂 pic.twitter.com/3tGPop7iRq

donald tr*mp : I WON THIS ELECTION , BY A LOT

I can get used to this in my news feed for the next coming years. #happiness #Election2020 pic.twitter.com/LRKXtapRXR

I can’t wait for the documentary on this election.

Reply
Upvote
2 upvotes
@michael yes, because Trump was so unifying... 🙄

Reply
Upvote
@rush Judge politicians on what they do and not what they say. Obama was was much more divisive.

Reply
Upvote
@michael ‘speaking’ is a verb. Most of what a president does is say things, it’s the crux of their job. Trump doesn’t get a pass on what he said because he said it from the Oval Office.