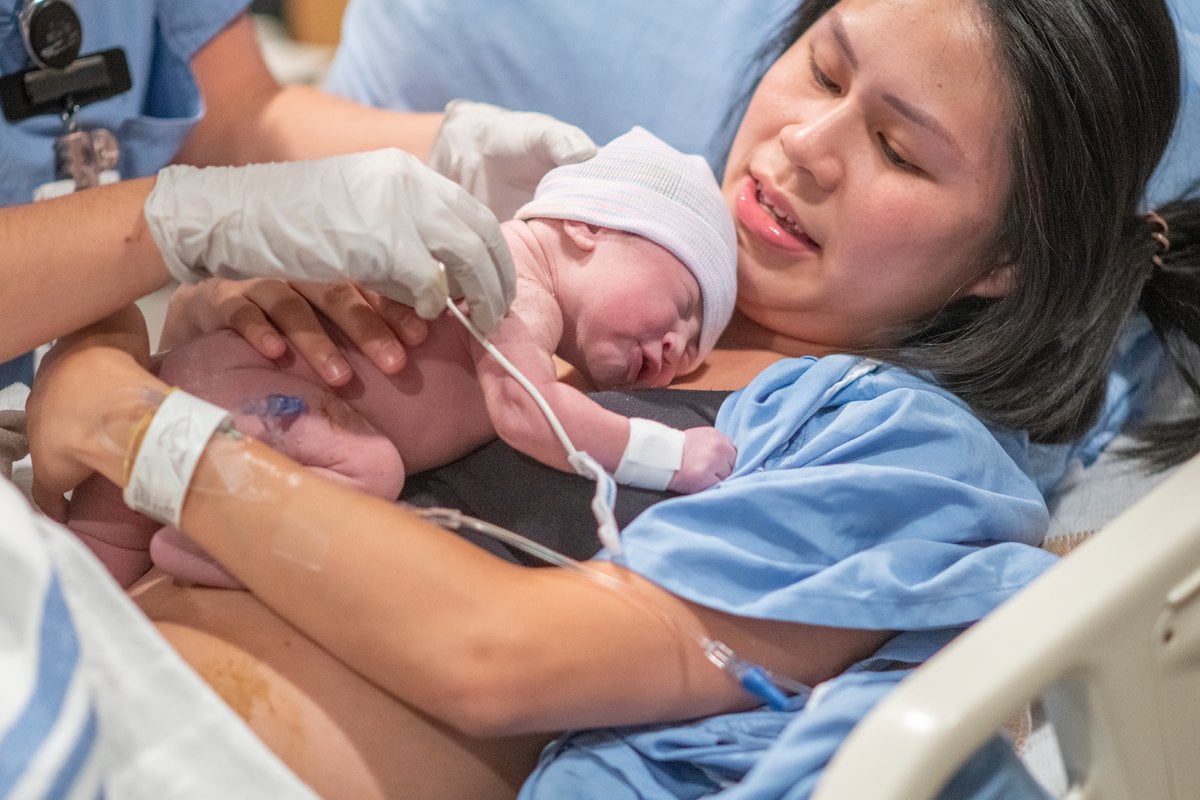 Giving birth is as unpredictable as it gets. From surprise bowel movements to bodily fluids and insane contractions - it's not exactly the most glamorous of times. It's intense! Exciting! Really freakin' scary!

But goodness, it's all worth it for that little spud. Right?

Watch: Have you listened to Mamamia's podcast The Delivery Room, yet? Check out the trailer below.

And while doctors, nurses, and midwives see all the ~unexpected~ joys of childbirth almost every day and treat it like NBD, it can help to know you're not alone.

Here, we've asked a bunch of mums to describe their most unexpected moments during labour and delivery.

But first: A 32 hour labour and an emergency c-section - listen to Leigh Campbell’s birth story. Post continues below.

"After my first, I stood up straight after my son was delivered [via] water birth, stepped out of the tub and my placenta fell out, whacked the side of the tub and went sliding across the room."

"I was about to go in for an emergency c-section, but a man with twisted testicles took precedence. True story."

"Bub was crying from the moment his head came out... like, while he was just a head!"

"I unexpectedly gave birth in the car park of the hospital (there was an article in the paper about it!)."

"I was in the hospital in labour and my sister rocked up in labour as well! We gave birth to our daughters that same day, within two hours of each other. It made it easy for our friends and family to come and visit us both at once!"

"I went in for a tour of the maternity ward with my mum and sister four weeks before I was due. I felt a bit achy and just randomly mentioned it to the tour nurse... she checked me out and declared I was in labour!

"I rang my husband (who happened to be away for work four hours away). Around 24 hours later our little man arrived and one week after the tour, I left with a baby!"

"My daughter's shoulders were impacted behind my pelvic bones and discussions were conducted about whether they would need to break her collarbone to deliver her. Her head was out of the birth canal and then she was just stuck! For 30 minutes! It was traumatic for us both!

"She was finally delivered safely without drastic intervention, but I was hospitalised for two weeks due to swelling and bruising. Would not happen today, I’m sure!"

"When the epidural doesn't work even after three tries... I didn't know that there was a chance it couldn't work, but surprise!"

"When they arrive earlier than expected - like nine weeks early! And on moving day, when your waters break on the new house’s floor instead of the crappy rental carpet!"

"My anaesthetist was feeling and very gently pushing the sides of my lower spine to get ready for the epidural, and my waters broke. He did it!"

"I was not expecting the intense shaking or chills afterwards."

"Being handed something warm and squishy... i.e. my baby. The first time it was all so surreal, and it didn't occur to me that the bump on the front of my body would then transform into something separate from me!"

"My body went into a hyper-reactive state and I experienced allergic reactions to everything that touched my body during my caesarean (cloths, antiseptics wash, caesarean incision closure tape, epidural patch, pads for blood loss).

"My body itched, blistered and burned for weeks afterwards. Combined with vasospasm from feeding that went on to last 10 months and required breast surgery. I'm fairly sure I have mild PTSD from maintaining such a high base level of pain for so long."

"My firstborn came out with her arm outstretched (made delivery very tough for me!), but I’ll never forget my husband telling me later that he thought she had a hand growing out the side of her head."

"I had a caesarian with first baby but with my second baby my uterus opened up internally like a zip! Hello, emergency surgery."

"Sometimes they arrive early... like, nine weeks early when your husband is drunk and you have to drive yourself to the hospital. And when your waters break, it feels a little like an elastic band snapping and you will probably sniff because you can’t be sure if it is wee or amniotic fluid!"

"When your usually non-confrontational, shy and easy-going partner, stands up to the midwife on the phone who is telling you your contractions aren’t close enough and says, “Something is not right, we're going to come to hospital!” This was after 24 hours of labour at home. We arrived at hospital five centimetres dilated, and eight hours later had an emergency c-section as the baby was under stress."

"I did not expect to be more overwhelmed by the pressure than the pain. Nothing compares. I also didn’t expect hypno-birthing techniques to actually work!"

"My biggest surprise was to find that an epidural can actually NOT WORK. It worked for my first birth (although I had to have the needle placed in my back three times before they got the right spot).

"I was so excited for the epidural in my second labour and the relief never came. I felt like I was birthing the spawn of the devil and I could feel my actual soul trying to leave my body to escape the pain. I did not know that an epidural not working was even a possibility. So that was unexpected.

"Also, my post-partum haemorrhages were unexpected. Although not uncommon. After my babies were out, I just felt gushing between my legs. It was such a fast flow I actually couldn’t comprehend how it was blood. The faces of the midwives told me it wasn’t great. Thankfully, the bleeding stopped itself. I was lucky."

"I have birthed three out of four babies breach, all vaginal, back in the 70s, 80s and 90s. The first was detected via X-ray. The second one I kept telling them it felt breach, but they said 'hands presentation'... nope, feet. Third was textbook breach."

"Unexpected 7lb 10oz baby after the obstetrician had tried to convince me for weeks to have a caesarean because my baby was predicted to be over 10lb!

Did something unexpected happen to you when you gave birth? Share with us in the comment section below.