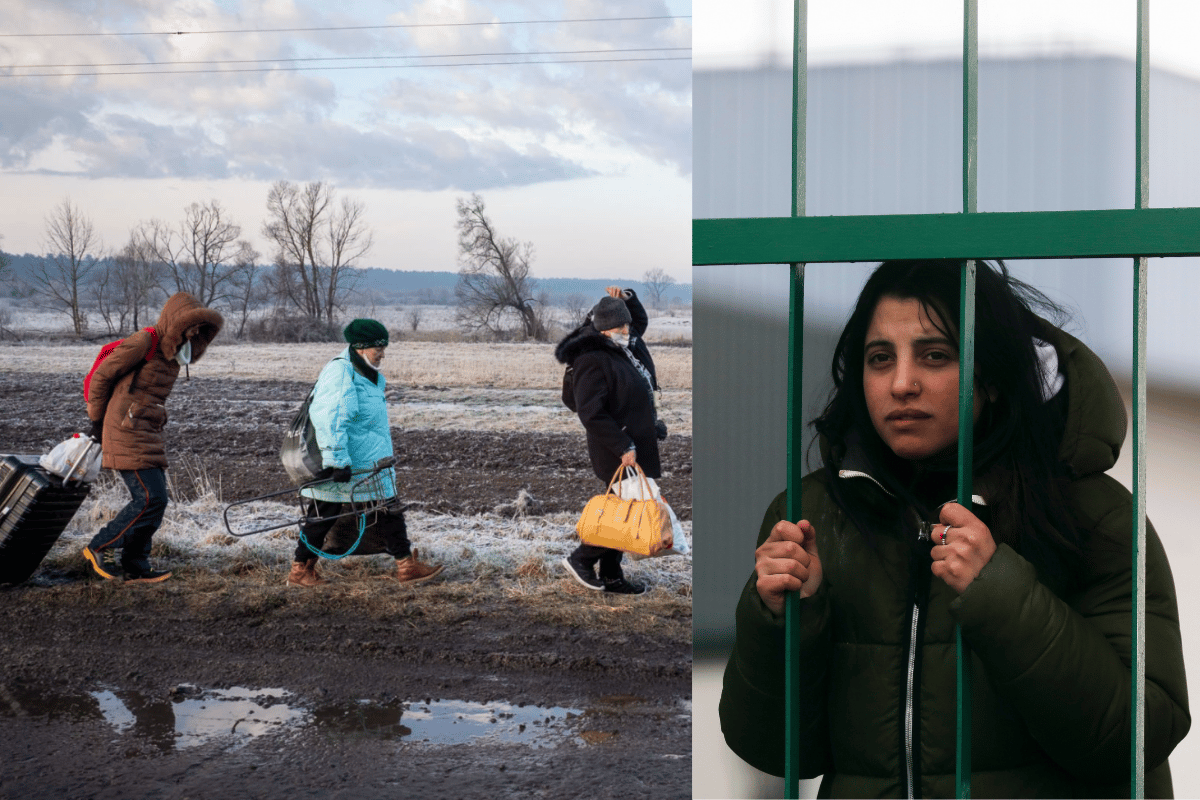 This post includes distressing imagery and could be triggering for some readers.

According to the UN's refugee agency, over half a million people have fled Ukraine since the Russian invasion began last week. But the angle that some commentators and media outlets have chosen to fixate on is the ethnicity of those fleeing; a focus on those who are "European", and "white" with "blue eyes and blonde hair".

Even the word "civilised" has been used to describe Ukrainian/European refugees. As if those who've fled wars in the Middle East or Africa, are "uncivilised" in comparison.

The highly problematic reporting has been called out by advocates, other journalists and leaders - but it's not an isolated transgression. It's happening multiple times a day, across multiple outlets.

On CBS News, one senior foreign correspondent who was reporting from Kyiv said in a piece to camera: "But this isn't a place, with all due respect, like Iraq or Afghanistan, that has seen conflict raging for decades. This is a relatively civilised, relatively European - I have to choose those words carefully, too - city, one where you wouldn't expect that or hope that it's going to happen."

On BBC News, Ukraine's deputy chief prosecutor said: "It's really emotional for me because I see European people with blue eyes and blonde hair being killed every day with Putin's missiles."

For American journalist, the conflict is not expected in ‘civilized’ ‘European’ Ukraine as it is not an Iraq or Afghanistan! This is the crux of world’s problem. pic.twitter.com/RrUu4JSnCv

In the UK, a news reporter said on ITV: "The unthinkable is happening to them. This is not a developing third-world nation: it is Europe."

On the Al Jazeera English TV channel, another anchor told viewers: "What's compelling is, just looking at them, the way they are dressed, these are prosperous - I'm loath to use the expression - middle-class people. These are not obviously refugees looking to get away from areas in the Middle East that are still in a big state of war. These are not people trying to get away from areas in North Africa. They look like any European family that you would live next door to."

It's not just isolated to television reports. In print, the UK's Daily Telegraph ran an article that said: "They seem so like us. That is what makes it so shocking. War is no longer something visited upon impoverished and remote populations. It can happen to anyone."

Bulgaria's Prime Minister declared: "These are not the refugees we are used to. These are people who are Europeans, so we and all other EU countries are ready to welcome them. These are … intelligent people, educated people … So none of the European countries are afraid of the immigrant wave that is about to come."

In a statement this week, the Arab and Middle Eastern Journalists Association (AMEJA) condemned these examples, describing it as "orientalist and racist".

A post shared by UNHCR, the UN Refugee Agency (@refugees)

"AMEJA condemns and categorically rejects orientalist and racist implications that any population or country is 'uncivilised' or bears economic factors that make it worthy of conflict. This type of commentary reflects the pervasive mentality of normalising tragedy in parts of the world such as the Middle East, Africa, South Asia, and Latin America. It dehumanises and renders their experience with war as somehow normal and expected. Civilian casualties and displacement in other countries are equally as abhorrent as they are in Ukraine."

Also referencing the comments made by the CBS News senior foreign correspondent, Sara Saleh, an Arab Australian legal fellow, writer and poet said on Twitter: "My utmost solidarities with the Ukrainian people who are paying the highest price. But this deeply racist coverage and political double standards is cause for concern for us all."

Unfortunately, there are also countless reports from civilians trying to flee Ukraine that are allegedly experiencing racial bias and discrimination.

“We were treated so badly. We took buses to the Romanian border. It was very scary then we had to walk across the border while hearing gunshots…all we did was pray…I witnessed a lot of racism,” says a Moroccan student fleeing #Ukraine #UkraineRussia https://t.co/2dipep0W7X

Being a foreign student is hard enough — I was one. And it's heartbreaking to hear about Indian and African students navigating war while facing racism and double standards on passports. The stories in here are terrible!https://t.co/D5KgwSOfKl

For many years now, Ukraine has been a place that several African, Caribbean and South Asian students have gone to study - medicine in particular. And it is these people of colour that are documenting the difficulties they have faced trying to escape the conflict.

One foreign national medical student Emily* told The Guardian she had waited for hours at the Ukrainian border for guards to let her enter neighbouring Poland, because they were "prioritising Ukrainians". After finally being allowed to cross the border, she was refused entry to a refugee hotel because "it was meant only for Ukrainians", even after Emily offered to pay for a room.

In response to these first-hand reports, Nigeria's president released a statement saying: "All who flee a conflict situation have the same right to safe passage under UN convention and the colour of their passport or their skin should make no difference. There have been unfortunate reports of Ukrainian police and security personnel refusing to allow Nigerians to board buses and trains heading towards Ukraine-Poland border."

As Syrian journalist Okba Mohammad said: "A refugee is a refugee, whether European, African or Asian. Show the same empathy and support to all people fleeing war: notwithstanding their racial identity."

Reply
Upvote
2 upvotes
I was somewhat sickened to see our government touting the number of Ukranian visas approved a few days ago, when people who helped our military are still being hunted and killed in Afghanistan a year after we should have evacuated them.
L
laura__palmer 5 months ago

Reply
Upvote
2 upvotes
So 18th century race theory is still alive and well, then. This is just sad.
Also, Syria, for example, was a developed, “civilised” nation before it was reduced to a hell hole (with help from us, the UK, Russia and America, we have an obligation to take refugees from the Middle East considering out involvement). But that shouldn’t be the criteria to help people fleeing from war. People from third world countries need to be considered humans worthy of help, too. Let’s not pit people fleeing from war against each other based on skin tone, it’s so disgusting and all these commentators and politicians should be ashamed to have this come out of their mouths.
And, can I add that, just because someone isn’t white, doesn’t mean they aren’t from Ukraine, or any other “white” country.
M
michael 5 months ago