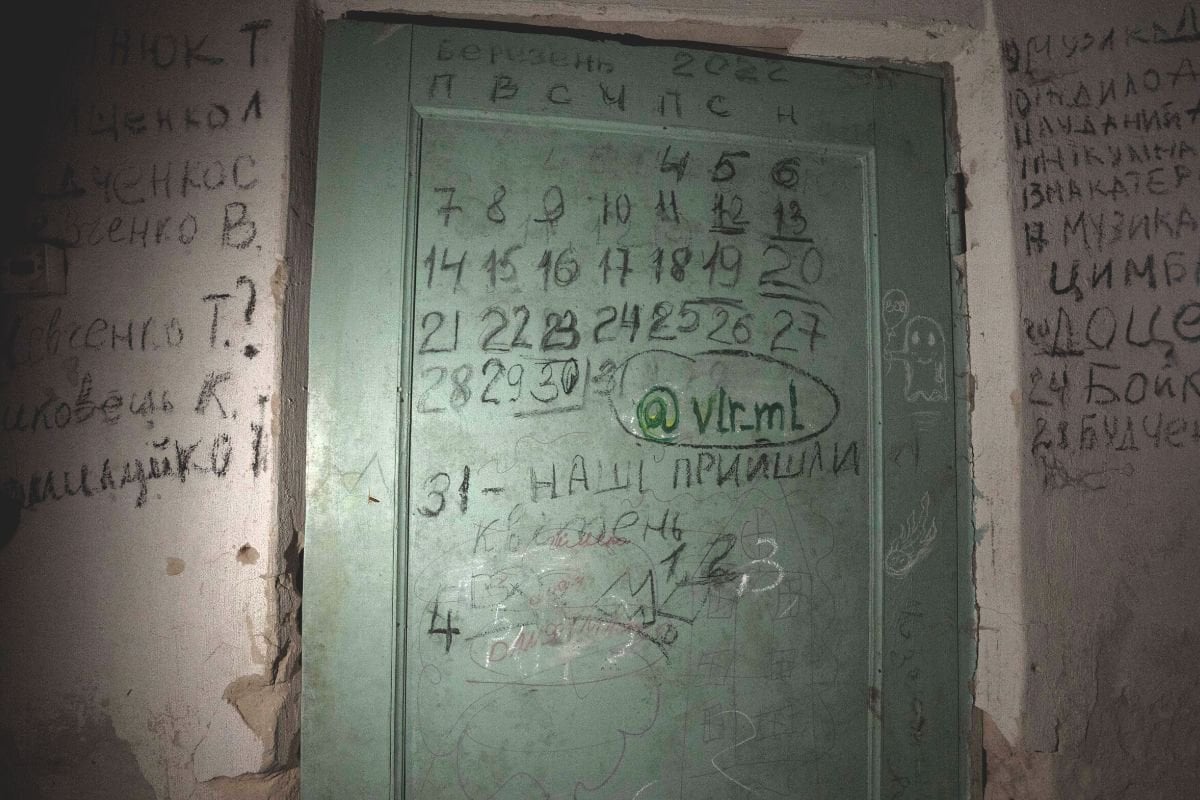 This post includes graphic depictions of extreme violence and will not be suitable for some readers.

One person died every three days on average.

The door leading to the basement prison was used by those inside to keep track.

For around 28 days in March this year, 371 Ukrainian civilians were held hostage in a secondary school basement in the village of Yahidne, north of Kyiv. Russian invaders used the school as their command centre, keeping the locals in a cramped space beneath them as a 'living shield.'

Video via The Associated Press

They ranged in age from five months to 93 years old. At least 60 children were among them.

Seven were killed outside, likely executed. Hostages would be taken upstairs to be interrogated, and they'd never return.

Ten died from inhumane conditions; there was no space to move, limited access to fresh air, food or water, no electricity and nowhere to go to the toilet. They had to take it in turns to sleep, as there wasn't enough room in the 197 square metre area for them all to do so overnight.

Their deaths often went unnoticed until they failed to get up for daily food rations, with one survivor telling Radio Free Europe/Radio Liberty (RBE/RL) they'd, "try to wake a person up when the distribution of food begun, but the person would already be cold [from death]."

"It was dark in there, everyone was sitting, they didn't walk, [so] it was impossible to know that someone had died," she added.

Nadiya told The Sydney Morning Herald she watched her neighbour die beside her in that hellhole from suffocation.

“This is our concentration camp,” one man told The New York Times, as he revisited the dark and dingy makeshift cell.

Dead bodies were placed in the school boiler room, a place RBE/RL reports hostages would occasionally wash and be allowed to get hot water from. They'd do so amongst three-day-old corpses that had not yet been moved to the village cemetery.

Pictures captured of the underground bunker show darkness. Kids' pictures and doodles cover the walls, and teddy bears and dilapidated furniture is scattered across the now empty room. 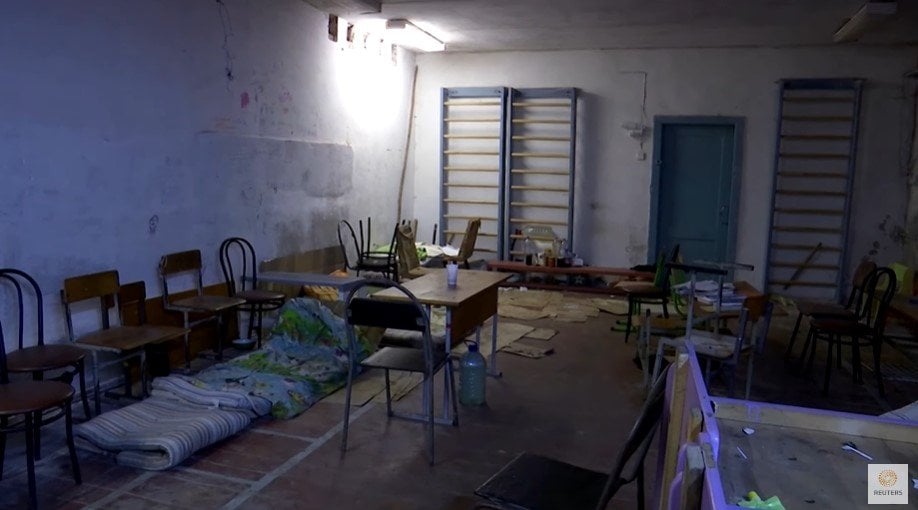 The school basement that held more than 300 hostages for close to a month. Image: Reuters/YouTube. 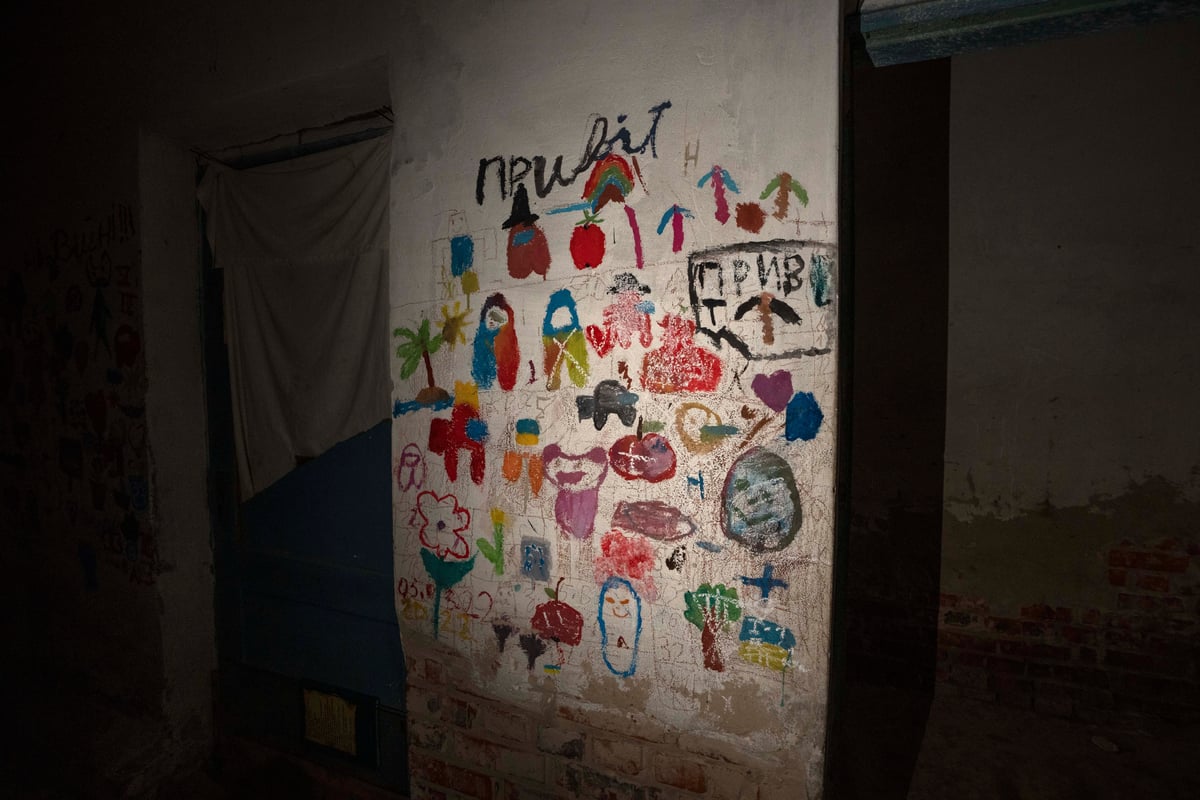 To pass the time in captivity, children drew on the basement walls. Image: AP/El-Mofty.

In a picture taken during captivity by a man who managed to hide his phone, Ukrainians of all ages sit shoulder-to-shoulder. On chairs, on laps, on the ground. Bags holding whatever belongings they managed to grab before being ordered into the room at gunpoint hang from the walls to make use of the limited space.

~300 civilians were held captive in the basement in Yahidne, the Chernihiv region. For 26 days, #Russian soldiers kept them suffering from lack of food, fresh air, medication.

This is the only photo made by one of the captives.
📸Courtesy Photo#StopRussianWar #RussianWarCrimes pic.twitter.com/snl1k9Bpl1

AP reports they were kept there day and night, with limited trips outside to relieve themselves (other times, they shared the use of buckets in the basement), or to cook on open fires. Sometimes, select people were allowed to make a short trip to their homes if they sung the Russian national anthem.

A survivor, Ivan, told The Sydney Morning Herald, "they [the Russian soldiers] would get drunk, come down with a flashlight and give a child a grenade to play with."

Beyond the school grounds, the village was destroyed during the nearly month-long Russian occupation.

The tiny farming town is only five streets wide, and the majority - if not all - homes and businesses were pillaged and damaged. 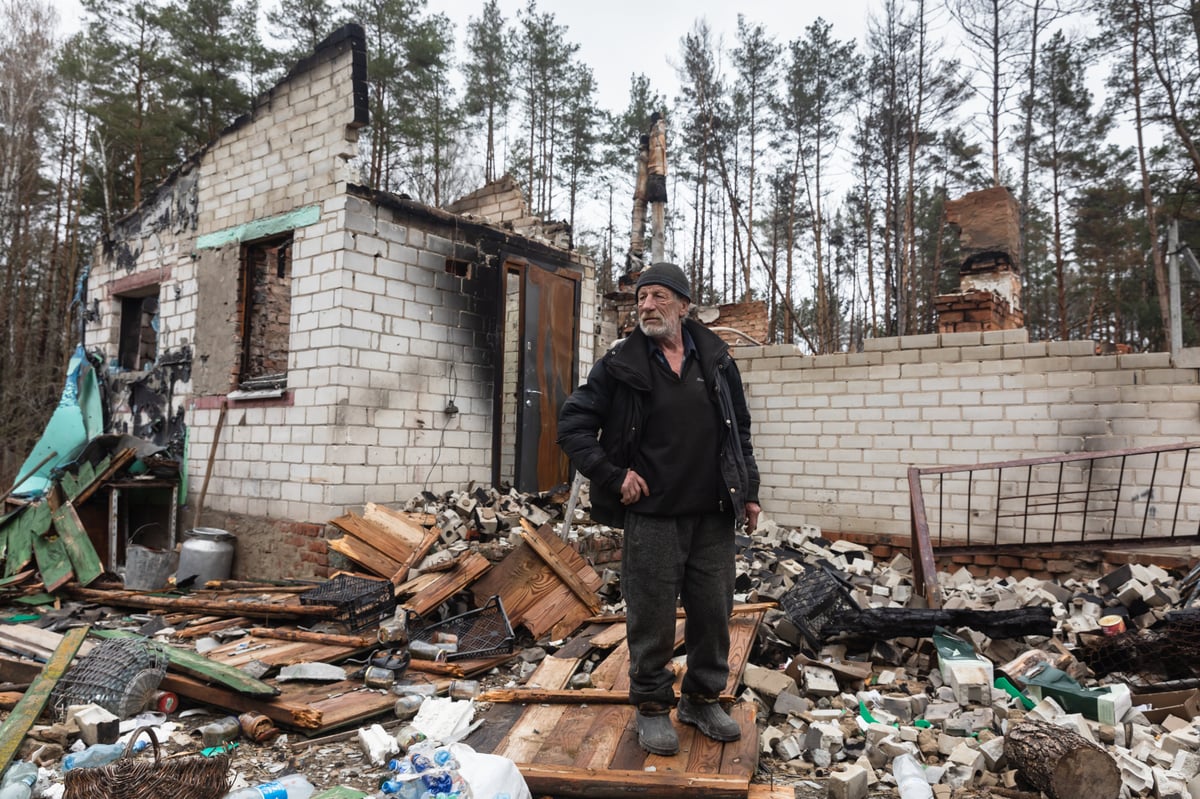 The Russians left at the beginning of April, after a large-scale withdrawal north of Kyiv.

But what happened in the village of Yahidne is not isolated.

Ukrainian authorities have accused Russia of widespread war crimes, following the unearthing of mass graves in towns such as Bucha and Motyzhyn, and the discovery of bodies of people who had had their hands tied and been shot in the head.

The individual stories of torture, rape and murder coming out of Ukraine are hard to digest.

Olekdsndr Fayizov showed The Sydney Morning Herald the bloodied wall where Russian soldiers would beat his head during interrogations in the town of Tostyanets, for example.

I wrote in April about the unspeakable toll on women during this war. In one horrific report, 25 women and girls as young as 14 were held captive in a basement in Bucha, and systemically raped over many days. At least nine fell pregnant.

Ukraine says it is investigating more than 21,000 war crimes and crimes of aggression allegedly committed by Russia since the start of its invasion. Russia denies all of them.

The war in Ukraine has been going for 147 days now. Civilian deaths are now somewhere over 5,000, including dozens of children.

Russia is showing no signs of slowing down. In fact, this week Russia’s foreign minister admitted his country's territorial ambitions have expanded beyond Ukraine's eastern provinces, to the country's south.

The horror for the people of Ukraine continues. And we will continue to tell their stories.

Reply
Upvote
2 upvotes
These stories are horrendous and heartbreaking, but I appreciate so much that you are still sharing these stories, reminding us that just because it may dropped off the “regular news cycle”, doesn’t mean it has gone away. Those people are still suffering everyday. Thank you for not forgetting about them, and not allowing your readers to forget about them either.
Resources
Very Peri
Skin
News
General
Opinion
True Crime
Politics
Sport
Explainer
Entertainment
Celebrity
Reality TV
Movies
TV
Books
Rogue
Royal
Lifestyle
Beauty
Fashion
Weddings
Home
Wellness
Health
Fitness
Travel
Food
Family
Before The Bump
Pregnancy
Baby
Kids
Teens
School
Parent Opinion
Work & Money
Money
Finance
Career
Lady Startup