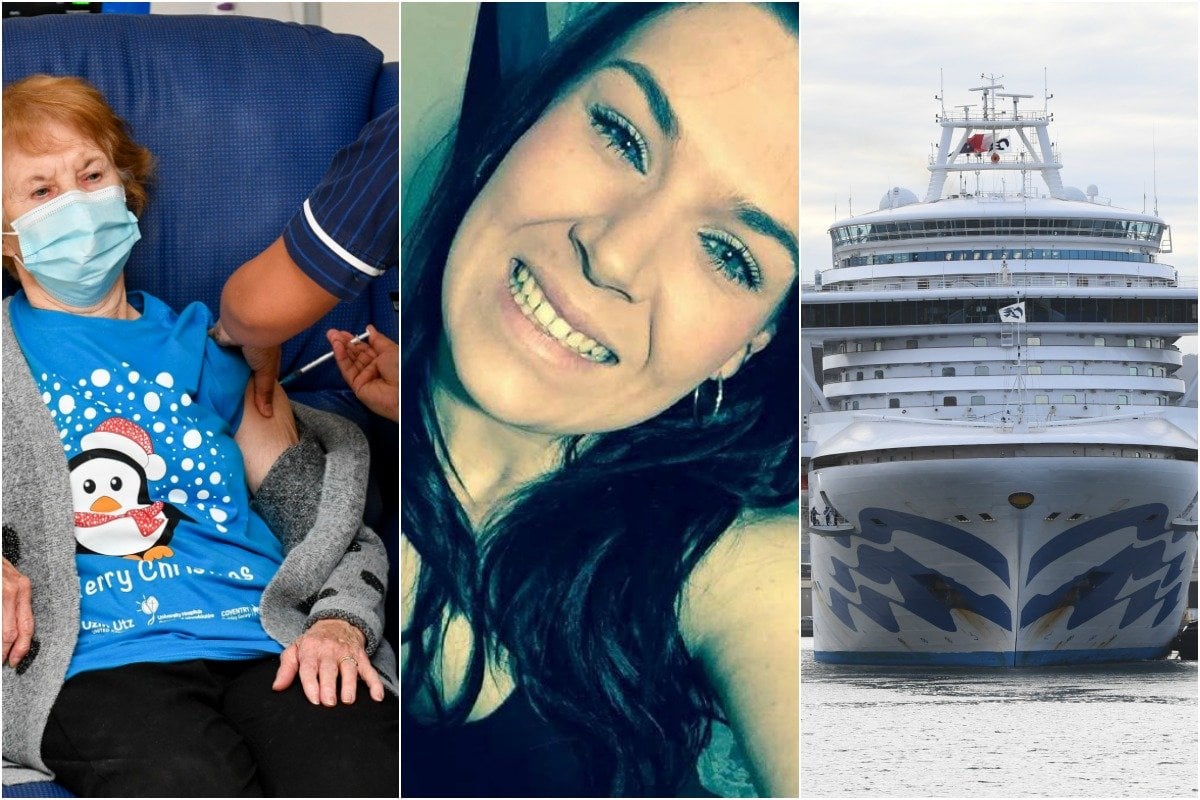 90-year-old grandmother the first person in the world to receive a clinically approved COVID vaccine.⁠

Britain has begun the mass-vaccination of its population against COVID-19, becoming the first Western nation to do so in a global endeavour that poses one of the biggest logistical challenges in peacetime history.

On a day dubbed "V-Day", health workers on Tuesday started inoculating people with a shot developed by Pfizer and BioNTech, with the country a test case for the world as it contends with distributing a compound that must be stored at -70C.

Margaret Keenan, a grandmother who turns 91 in a week, became the first person in the world to receive the vaccine outside of a trial when she received the shot at her local hospital in Coventry, central England.

"It's the best early birthday present I could wish for because it means I can finally look forward to spending time with my family and friends in the New Year after being on my own for most of the year," she said.

The country has ordered enough supplies of the Pfizer-BioNTech shot to vaccinate 20 million people. The developers said it was 95 per cent effective in preventing illness in final-stage trials.

Russia and China have both already started giving domestically produced vaccine candidates to their populations, though before final safety and efficacy trials have been completed.

Morocco plans to vaccinate 80 per cent of its adults in a mass vaccination operation due to begin this month, using the Chinese vaccine that's not yet completed advanced trials to prove it is safe and effective.

Critics in Morocco have also expressed concerns that citizens might be forced to take the vaccine, but the health minister insisted that COVID-19 vaccinations will not be mandatory but will be free.https://t.co/V9qoLP8GDE

The country is battling a resurgence in virus infections, with the number of recorded deaths from the virus surpassing 6000.

Thirteen students and two teachers have been taken to hospital after a lightning strike at a central Queensland school.

The lightning is believed to have hit the ground between two trees on the oval where the children were playing during their lunchtime.

13 children and two teachers are in hospital following a lightning strike at a school in central Queensland.

"The main complaints were anxiety. The kids were pretty wound up after the incident," paramedic Greg Christensen told reporters.

"They were also complaining of tingling to the lower limbs."

The group of children were aged between 10 and 12 years.

Skeletal remains found in a NSW forest are believed to be those of a Wagga Wagga woman who went missing more than three years ago.

Police at the time were alerted to the suspicious circumstances surrounding her disappearance and suspected she had been murdered.

Investigators and specialist forensic officers began a search in the Lester State Forest, about 20km southwest of Coolamon, and discovered skeletal remains on Tuesday afternoon, and police believe the remains are those of Ms Boyd.

The Victorian government has been accused of covering up another hotel quarantine breach that occurred on July 14 after a traveller disembarked from San Francisco into Sydney, and then got onto another flight to Melbourne skipping the 14 day quarantine.

The breach was leaked to The Age. Unlike the two German-Australian travellers who made it to Melbourne last week, this breach was not made public.

Exclusive: Victorian authorities have confirmed another case of someone evading hotel quarantine in Sydney and flying into Melbourne, after a man arrived from San Francisco in July. https://t.co/YBdb0WjwLV @theage

The airline worker - who was travelling as a passenger - was detected by domestic airline staff and detained and placed into hotel quarantine at Melbourne Airport.

The man tested negative for Covid-19 on day three and day 11 of his stay.

A cool change and some rain has eased fire conditions on Queensland's Fraser Island with all warnings now at advice level.

A large air tanker borrowed from New South Wales to help fight the fire front as it raged out of control this week is being sent back to its base.

Yesterday people were being told to prepare to leave two settlements on the island with both areas at "watch and act" alert level on Tuesday evening.

Rain has delivered an 11th hour reprieve to the fire-threatened community of Happy Valley on Fraser Island, with falls of more than 20 millimetres recorded. https://t.co/kDhhmxDYB0 @TheRosieOBrien #qldfires #7NEWS pic.twitter.com/9L3Eknx2Nn

"You need to be ready to follow your bushfire survival plan. If you do not have a plan, or intend to leave, you should be ready to leave the area because the situation could get worse quickly," QFES said.

But an intensive air and ground firefighting operation - combined with light rain overnight - had effectively steered the fire around the town of Happy Valley - saving it.

A swim instructor has vehemently denied touching his female students on their private parts for his own sexual gratification and maintains his hands never strayed inside their swimming costumes.

Following more than five weeks of evidence from nine girls, parents, pool staff, and psychologists, Kyle Daniels gave evidence that he "never intentionally touched any students inside their swimmers".

The 22-year-old has pleaded not guilty to 26 charges, including multiple counts of having sexual intercourse with a child under 10 and indecently assaulting a person under 16.

Under cross-examination in the District Court on Tuesday Daniels agreed there was no reason for a swim instructor to hold a child near the groin or chest area as was described by some of his alleged victims.

Daniels also recalled the day of his arrest where he says he was mocked by an officer and called and "a disgusting pedo."

"[He was] laughing about what would happen to me in jail," he said.

Australia is extending a ban on cruise ships by another three months, concerned the risk of coronavirus is still too high.

The ban on domestic and international cruises was due to be lifted next week, but will now remain in place until at least mid-March.

Limitations on outbound international air travel will also be extended.

Cruise lovers hoping to jump on board a ship in the new year will need to put their plans on hold, with the Australian government extending the ban. https://t.co/xqntMBowXj

Cruise ships have been banned since the Ruby Princess disaster in NSW, which saw almost 900 infections and 28 deaths.

While Australia recorded another day of zero community transmissions on Tuesday, there were another 15 infections recorded in hotel quarantine.

"What that says is the international world remains a challenging and dangerous environment," Health Minister Greg Hunt told reporters on Tuesday.

"The risks abroad are enormous, and if we don't maintain these important protections, then we won't be protecting Australians."

Australian students have risen in global calculations for mathematics and science, outstripping many of their international peers.

High school students are now in the top 10 rankings according to the 2019 Trends in Mathematics and Science Study, released on Tuesday evening.

But primary students are continuing to under perform, with Australia's Year 4s ranked 14th out of 58 nations for science (up 11 spots on 2018) and 27th for maths (up one spot).

The results mean they're being beaten by their peers in countries like Singapore and Russia.

- An AstraZeneca and Oxford University vaccine has become the first to have its results published in a peer-reviewed scientific journal.

- Deaths from COVID-19 in the US have soared to more than 2200 a day on average, matching the peak in April with virtually every state reporting surges.

- A UK train tour by Prince William and his wife Kate has received a frosty welcome from leaders in Wales and Scotland, with one Welsh official saying he would rather "no one was having unnecessary visits" during the coronavirus pandemic.

- Excess amounts of lead and nickel in food or drinking water may have caused a mysterious illness in southern India that's left more than 500 people suffering from fits and nausea, officials say.