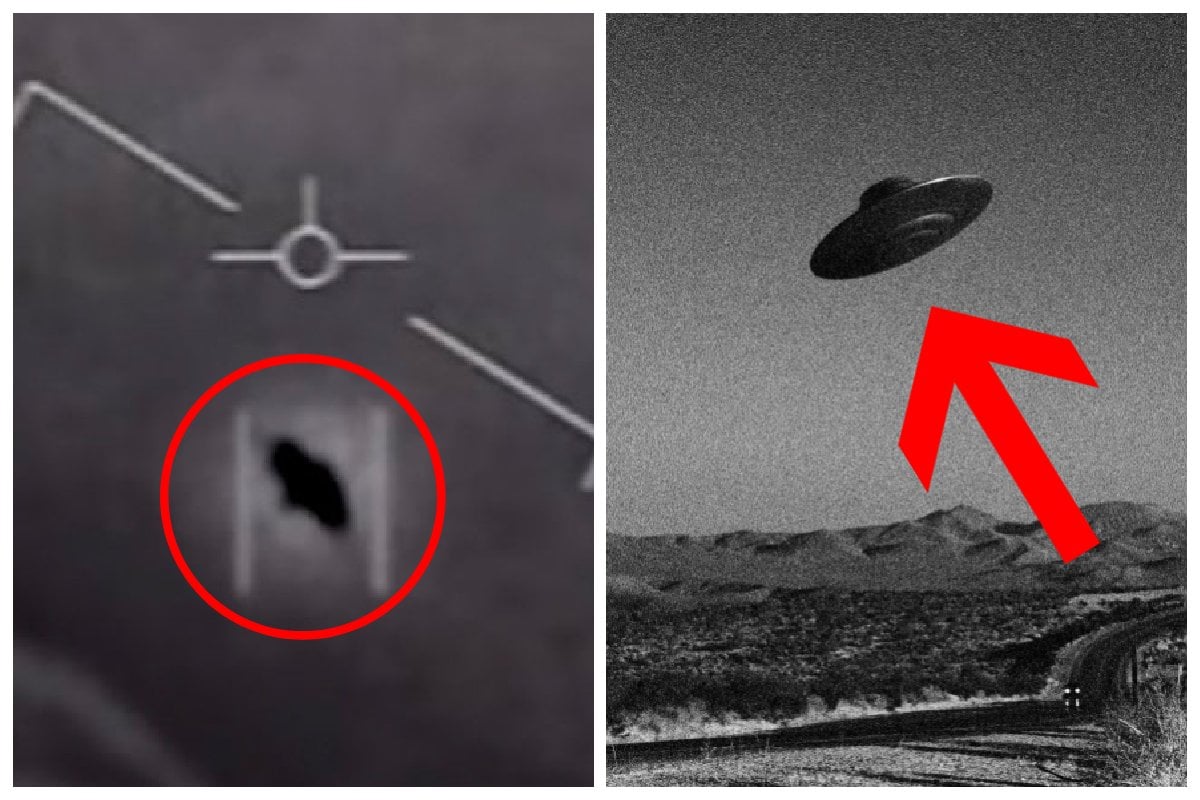 There has been lots of UFO talk as of late. Heaps. People (see: me) are frothing over it. Love the stuff. But in case you haven't been watching conspiracy theory documentaries every single night (um, why?), while you eagerly wait for the Pentagon to hurry TF up and release that long-awaited report on UFO sightings, PLEASE SIT.

We need to talk aliens.

Because while the official report isn't released until June 25th, a sneaky little taster has dropped (!!!), and holy s**t… it sounds like aliens are definitely (maybe) very (possibly) real!

Watch: Diane McGrath may be one of the first people to live on Mars. Post continues below.

Conducted by US intelligence officials, the report — which includes formerly classified documents — examines over 120 UFO sightings from all over the world. Most of the "incidents" came from the military - namely Navy jet pilots.

The sneak peek has said officials have found “no evidence” that these sightings were definitely alien spacecrafts, but they still “cannot explain the unusual movements that have mystified scientists and the military.”

A slippery ol' statement. Kinda sounds like something someone who knows aliens are real would say...

The report found that most of these sightings “did not originate from any American military or other advanced U.S. government technology."

"We're talking about objects that have been seen by Navy or Air Force piolets or have been picked up by satellite imagers," former director of National Intelligence John Ratcliffe said in a recent report on Fox News.

Ratcliffe goes on to say that some of the objects, "frankly engage in actions that are difficult to explain."

While officials are toying with the idea that some of these sightings might have been "experimental technology" from Russia or China (cute!), they don't have any evidence to back this theory. Plus, the whole hypersonic speed, erratic movement and the ability to fly without wings thing is simply 👏 not 👏 possible 👏 in current aircraft technology, so... no.

As senior officials told the New York Times, “the very ambiguity of the findings meant the government could not definitively rule out theories that the phenomena observed by military pilots might be alien spacecraft.”

IT'S THE ALIENS, BOO.

Just to put all the things into perspective, our solar system is literally equivalent to one grain of sand. The universe - she's big. ZIF aliens aren't real!

Also! Let's not forget about our mate Bob Lazar, shall we? Never heard of him?? That's cool. I've watched three documentaries on him, so lemme give you a quick rundown.

Lazar is an American scientist and UFO whistleblower who put Area 51 on the map after claiming he worked as a reverse-engineer on a FKN SPACECRAFT in the '80s.

The major part of Lazar’s scientific disclosures was the existence of Element 115 - a stable isotope (science) which he said was needed for the ship’s antimatter reactor.

At the time, this element was completely unheard of, which resulted in heaps of doubt around his claims. But in 2003, Russian scientists were able to synthesise a chemical element with the atomic number 115.

HOW COULD HE HAVE KNOWN ABOUT IT 14 YEARS BEFORE IT WAS DISCOVERED, YOU GUYS. HOW.

Bob Lazar aside, a full version of the Pentagon report will be coming out at the end of the month - but if we go by any of the above, I can't see that we'll get a firm conclusion on wtf is going on 'cause everyone's just dodging the question.

Either way, seems to me that there are definitely aliens. And I'm down.

Do you believe in aliens? DO YOU. Share your throughs with us in the comment section below.

Reply
Upvote
1 upvotes
Quite a few years ago I was travelling near Coolah to Mudgee at approximately 2.30 am. Some distance away ahead of me lights were coming towards me. The lights were as high as the trees and were wider than the road. It was really puzzling as I considered I may have to pull off the road as we got closer. However the lights completely disappeared, as I got closer to where I imagined they might have been I looked across paddocks either side and could not see anything at all. I considered a UFO at that stage however thought that was silly of me to think so.