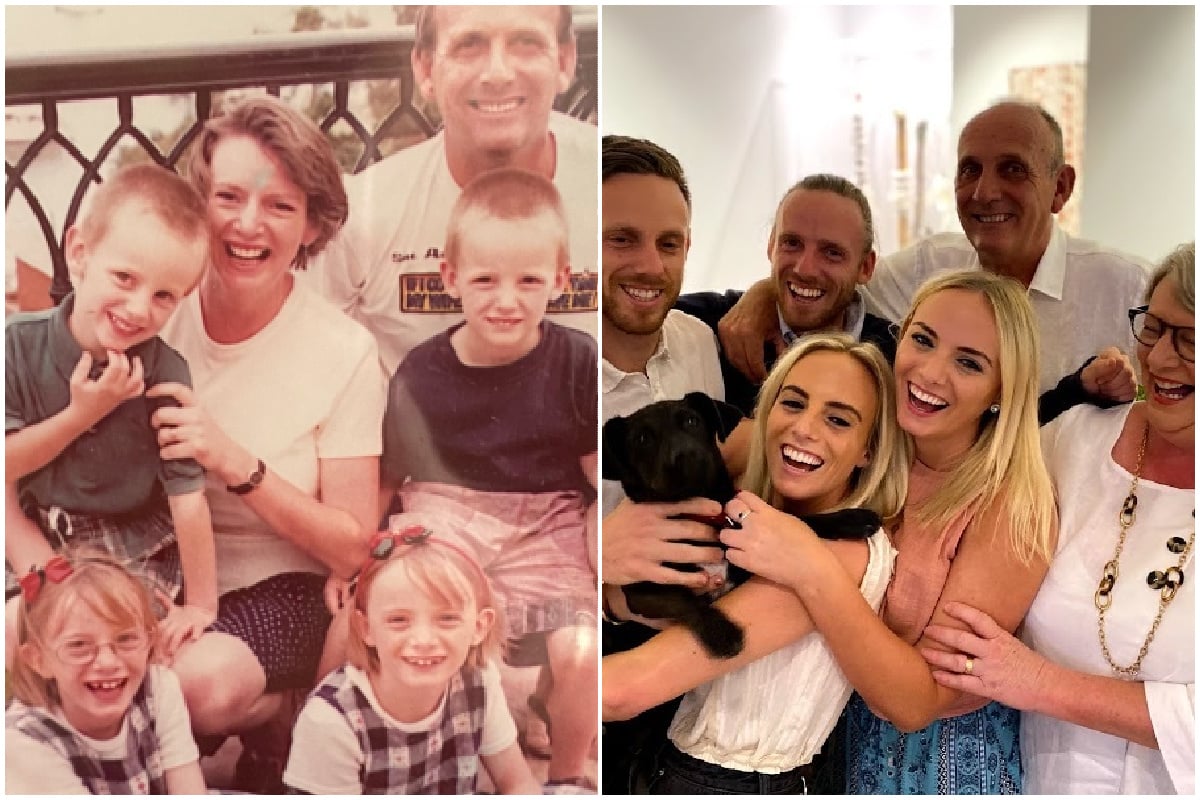 When I was growing up, there was nothing at all strange to me about the fact I was a twin, and also happened to have twin brothers.

Yes, our relative closeness in age meant that at one stage Mum and Dad had four kids under two and a half.

Yes, the house was always a mess.

Yes, every interaction with an adult consisted of a minimum five minutes of them trying to establish how they were going to tell us apart.

But it was completely and utterly normal.

Then I turned 30. And my friends started to have kids. And I started to think about kids. And Mum and Dad, I don't want to be rude but honestly... what the actual f*ck.

HAVING ONE BABY IS DIFFICULT. LIFE-CHANGINGLY SO.

Having two at once, twice, is absurd.

So as a grownup, I decided to ask my mum how but more importantly why and also, what.

Mum is often asked if she was using IVF, and if that explains the whole 'twins twice' thing. It's a slightly inappropriate question, but no, for the record, there was no IVF involved. She just has what those in the medical community (note: I know nothing about the medical community) call: 'magic ovaries'.

We're also asked whether we're identical or fraternal. Interestingly, once you have one set of fraternal twins, your likelihood of having another set goes up. Both my sister and I, and our brothers, had individual placentas, which led doctors to believe we were fraternal. But to really throw a spanner in the works, a recent genetic test showed my sister and I are actually identical, making the probability of mum having two sets of twins even more rare than we thought. 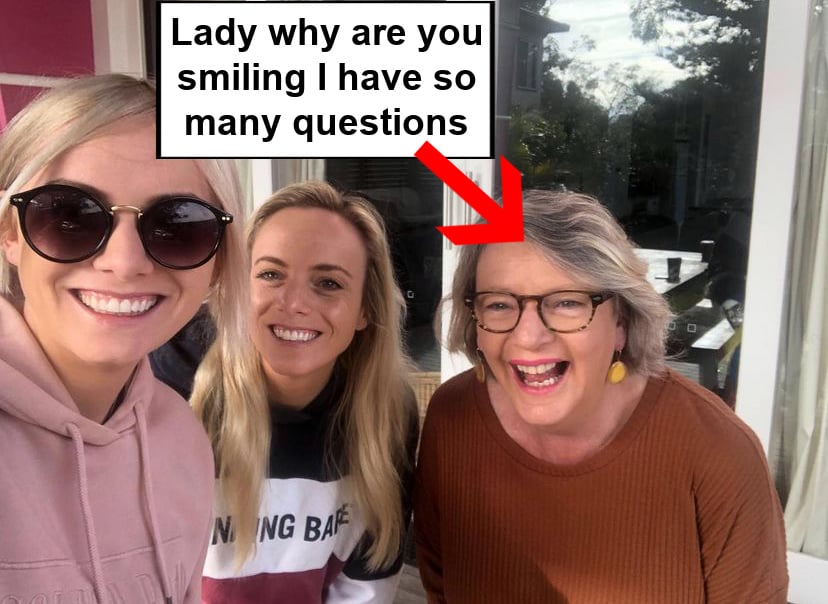 So now that those details are out of the way, here's an abridged version of my chat with Anne 'Magic Ovaries' Stephens:

Despite this not being a specific or helpful question, Mum explains, "When you walk the streets with twins, everyone stops and asks you questions and ooohs and ahhhhs and they get lots of attention.

"So I said to Dad maybe we should have another child to take the attention away from the girls. We don’t want them becoming attentions-seeking princesses." (Me? Never).

"So we decided to have another child, never thinking we could have twins again." 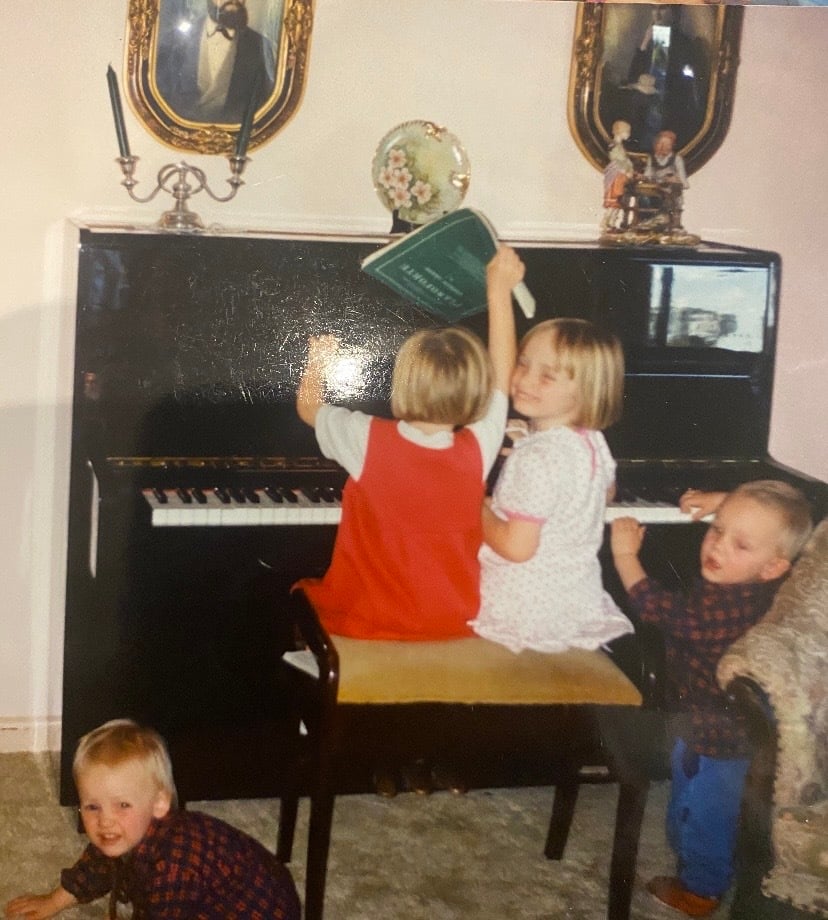 "Breastfeeding the boys at home was never going to happen," she said, explaining it would've been her "half naked on the lounge with a boomerang pillow while you guys ran around playing in the dirt and putting your shoes in the microwave and then the doorbell rings!"

Okay in her defence we did put our shoes in the microwave. But that was ONE time. And only to see whether there were sparks (there were).

Na, but were we cute? Did we play together? Was it actually kinda handy having kids who had a built in best friend?

I don't know if all parents are like this, but Mum weirdly refuses to tell us we were cute? I think she's either convinced it'll make us arrogant, or maybe we genuinely weren't cute, and she feels guilty about it.

Watch: A First Date with Clare and Jessie Stephens. Post continues after video.

Either way, she said, "one of the greatest advantages of twins is a built in play group". Mum was grateful for that because according to her, "playgroups are scary". Unsure whether she's referring to the kids or the parents, but let's be honest, it's probably both.

HOW DO YOU SLEEP WHEN YOU HAVE NOT ONE BUT TWO NEWBORN BABIES. AND WHEN ONE GOES TO SLEEP SURELY THE OTHER ONE CRIES AND WAKES THEM UP.

It would seem, however, that wasn't the case.

"You were all really good sleepers," Mum said, and thank you, I continue to be a very good sleeper. It's one of my only greatest skills.

"If I was sensible and didn’t have a life and went to bed early, I was okay," she said.

"It was hard being pregnant with toddlers running around. I was very tired, and it was hard to rest. I was told 'you should never wake a sleeping baby,' but that is just not possible when you have twins. You have to feed the baby that wakes first and then wake the other one so that feeding time is a bit more predictable. Feeding every two hours instead of four or five or six is just not humanly possible."

Interestingly, she added, "twins can sleep through the other one screaming."

Mum said she needed "Dad to be super hands-on especially at sleep time. He would often walk you in the pram to get you to sleep and then transfer you to bed/cot."

What would people not expect about raising two sets of twins?

Tell me the goss.

"I think people know it is really hard work physically," she said. "The emotional demands are enormous too but what is great is the built in playmate. Staying home was great, messy but great. We never had a tidy house."

(That is true. One time our cat gave birth in a wardrobe and no one noticed for like a week).

"Money is difficult too. If you go out you can’t buy drinks and snacks for four without it costing $50."

Maybe that explains why Mum got so cranky about the Easter Show every year. And packed really gross sandwiches when all the other families were having hot chips. 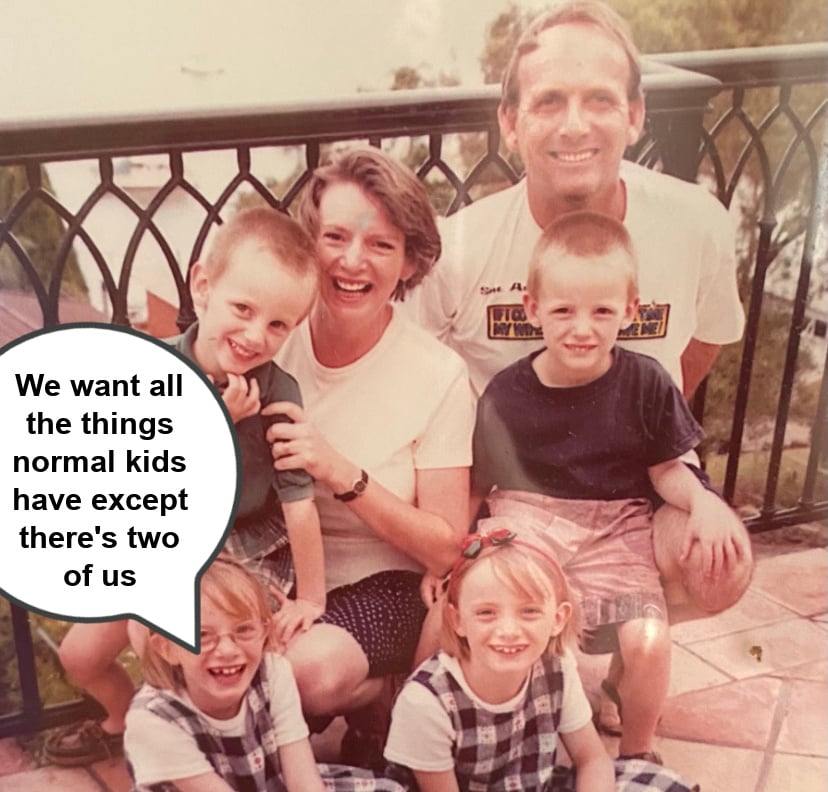 'I want the cool school shoes that cost $100. I'll grow out of them in a year. Oh, actually make that two pairs.'

Mum added that having someone mind us was always a "big deal". The four of us being so close in age meant there was a period where if Mum and Dad wanted to go to a wedding, or even go out to dinner, getting childcare was an ordeal.

Holidaying was even harder.

"We flew once just before the boys turned two so that we only had to pay for four seats," Mum said and dear God that's the saddest thing I've ever heard but okay.

What was the hardest part?

I thought it would be the holiday conundrum but according to Mum, the worst was when "everyone wanted to learn how to drive".

At the same time.

"Pick up after school when everyone wanted to share the story of their day was hard too," Mum said, as well as "catering for individual likes...food, picking a movie we would all like, navigating requests for different activities like sport or dancing. Remember I told you there was no dance schools in our area? That was just because I hated the idea of being a dance mum."

Okay, in hindsight that was an excellent decision, because I'm not aware of anyone who is worse at dancing than I am.

Finally, what was the hardest age to parent?

"Physically when you were babies," Mum said, "but emotionally when you were teenagers." She then clarified she was referring to us (my sister and I) and not my brothers, who, I quote, "have been so easy to raise".

Tell us how you really feel ffs.

"They were so compliant, never asked for anything..."

It's at this point that I abruptly ended the 'interview' because the conversation had landed in a weird place that wasn't directly about me.

I'm definitely of the opinion that both my parents deserve a medal for managing two sets of twins. I can't begin to count the hours of driving lessons completed (and relatedly, the hours of vehicle-adjacent fights), the number of school shoes purchased, the sporting games attended, the Christmas presents bought, the pets adopted, or the frustrating hours of teaching two kids to read and tie their shoelaces and eat solids at the same time.

But they did pretty well.

Sure, my sister and I can't dance, none of us can park and we're all moderately to severely interdependent, but apart from that, we're somewhat functional.

And that's what I call success.

Reply
Upvote
No twins in my family. But I am the oldest of 8. The first 7 kids were all quite close in age. Then there was a whole 5 years between the 7th and 8th child. As each of us got older, we were expected to look after the younger children. Although each of us had sibling rivalry with at least one other sibling, none of us experienced this with my youngest sister. She was very ill, and we would sometimes fight over who could look after the baby.

Reply
Upvote
6 upvotes
Grew up in a large family of 18 children, with 4 sets of twins, myself having a twin brother! All sets were fraternal. Fraternal males , fraternal females and two sets female and male. Even stranger, in each set of twins one twin was dark haired , blue eyed and right handed. The second twin in each set was blonde, brown eyed and left handed!