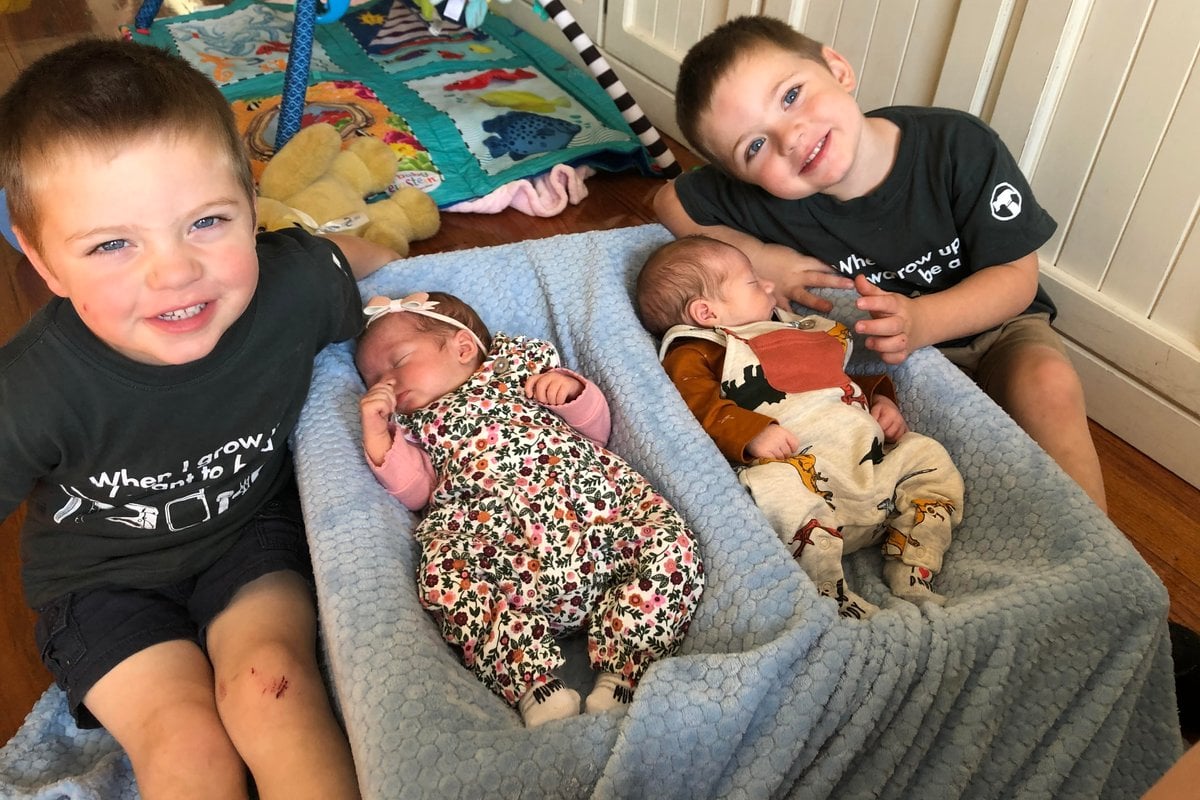 My husband and I would always joke about having twins again. But there was no way that we thought it would be our reality.

We always loved the idea of going back for 'one' more and making us a family of five. I mean, how easy would one baby be after having two, right?

Raising children goes by so quickly. Especially when you're raising twins.

Watch: Laura Byrne talks about the pressure to be a 'good mum'. Post continues below.

You’re never really in the moment. There’s always another to feed, to settle, to change and cuddle.

Soon enough, they are three years old, toilet trained, and you’re looking at kindergartens for next year.

When I went to the doctor after falling pregnant, I requested a dating scan and joked that I needed to know ASAP if I was having twins again. (Ha!)

On the morning of our eight-week ultrasound, my husband Ben joked: "It’s going to be twins again." I laughed it off. But in that moment, I felt my stomach turn. Instead of excitement, I was feeling incredibly nervous about our scan. It was almost like an instinct.

I laid down on the table, chatting away to the sonographer. And there it was. Or there THEY were.

Before the sonographer even told us, we saw them. Two little foetuses.

The sonographer confirmed the news with excitement: "Wow, you guys are having another set of twins!"

My whole body went numb. I don’t remember much after that. Ben was happy, smiling, and having a laugh. But I don’t think I even spoke during the rest of the appointment.

When we got back to the car, I cried.

Now, looking back, I know how horrible that sounds and I carry so much guilt for how I reacted initially. But I was having so many thoughts and questions in my head.

"How am I going to cope with another set of twins?"

"How am I going to cope with four children?"

"Will the boys feel left out?"

"Why can’t we just be normal?"

"How will I share around my love between four children?"

A few days passed, and the news was slowly sinking in. We shared the news early with our closest family and friends. Having that extra emotional support and hearing them say that it was all going to be okay helped a lot. 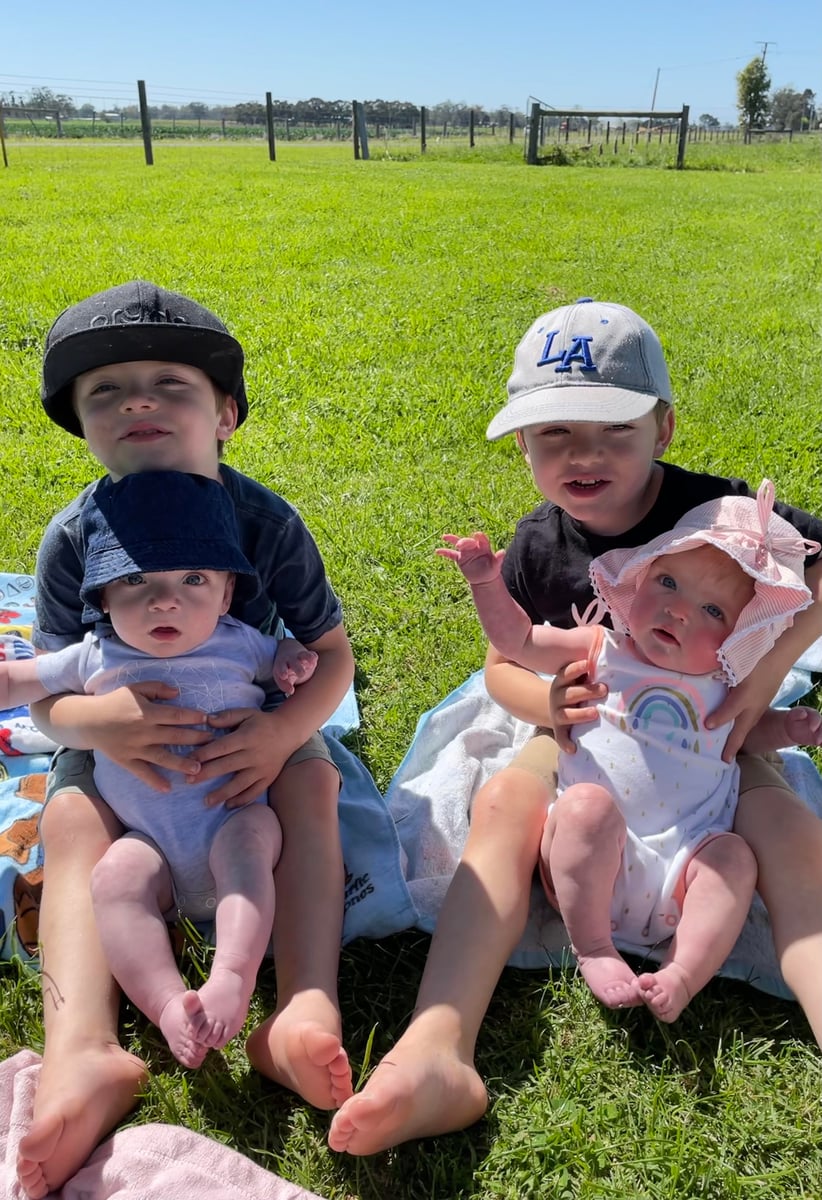 Soon enough, all of those negative thoughts turned into sweet memories of when the boys were babies.

Amongst the sleepless nights were double the amount of cuddles, kisses, smiles and giggles. That beautiful unbreakable twin bond that is magical to witness as a parent.

Hugo and Spencer are brothers and best mates. Sure, they fight, just like regular siblings. But their connection is different. They are always there for each other.

I could see all the positives in having another set of twins. I could also see how much of a miracle this was and that even if I didn’t feel ready for this, I felt like it happened to us for a reason.

The boys are the best big brothers to Billy and Aria. They absolutely adore them. The best part is, that whilst mummy is busy and has her hands full with the babies, Hugo and Spencer have each other to play with.

Having twins is the absolute best. And even though my hands are very, very full, so is my heart.

Sure, there are going to be many hard days and long nights. But this is all I know. I don’t want to wish away this current season of my life.

This post originally appeared on Four Little Wildlings, and has been republished with full permission.

Gabby is a mum to two sets of twins, a wife, and a blogger of all things motherhood and beyond.

Reply
Upvote
I felt pretty much the same way. I had 2 sets of twins and 4 under 4. I cried for what I knew my older 2 would miss out on.  I cried because I just wanted to be normal and not drive a van. I cried because I would never know what it was like to settle one child and then be able to sit and hold them. Now 4 years on my tribe is awesome but it took years to be able to do thing like go to a park without fences.   My kids are 8 and 4 and get along really well. We still attract a lot of attention when we go out. I’m not sure why but 4 kids is a head tuner.
T
Twins x2 7 months ago

Reply
Upvote
My husband and I also have two sets of twins.  We had boy/girl first and then two boys.  I too cried at the news, it is a little overwhelming.  When we had the first set my husband jokingly told the nurses, "we'll  be back in two years for the boys".  It was actually 27 months when we were back with fraternal boys.  Then he joked "we'll be back in two years for the girls"  Twenty two months later we had a girl (but just one this time).  We had 5 in 4  years.  I am the youngest of nine so I was use to a crazy household.  Now they are all grown with families of their own.  It was worth every minute as crazy as it was back then.
News
General
Opinion
True Crime
Politics
Sport
Explainer
Entertainment
Celebrity
Reality TV
Movies
TV
Books
Rogue
Royal
Lifestyle
Beauty
Fashion
Weddings
Home
Wellness
Health
Fitness
Travel
Food
Family
Before The Bump
Pregnancy
Baby
Kids
Teens
School
Parent Opinion
Work & Money
Money
Finance
Career
Lady Startup
Relationships
Sex
Dating
Separation
Friendship
Family
Real Life
Couples